Reaching good-quality H-mode and the development of ELM control techniques are among the main priorities for ITER during its non-active operations [1']. Recent encouraging experimental results at JET-ILW demonstrated a significant reduction in the H-mode power threshold for NBI-heated plasmas when a small amount of $^{4}{\rm He}$ ions, $n(^{4}{\rm He})/n_{e} \approx 10\%$, was added to hydrogen plasmas [2']. This finding motivated the ITER team to consider the use of H-$^{4}$He plasmas to widen the H-mode operational space in predominantly hydrogen plasmas [3]. Equally important, this mix also allows an application of the 3-ion ICRF scheme [4] with the off-axis heating of $^3$He minority ions, $n(^{3}{\rm He})/n_{e} < 1\%$, as proposed in [5], capable of additionally delivering up to 20MW of heating power in H + 10% $^4$He plasmas in ITER.

In this contribution, we report the results of physics studies on the ASDEX Upgrade (AUG) tokamak, in which the above mentioned ITER-relevant heating scheme was recently prototyped. The high efficiency of the 3-ion scheme for plasma heating was proven by applying an ICRF power ramp to increase the plasma stored energy and trigger L-H transitions in H-$^4$He plasmas (2.5T/0.8MA), see Fig. 1. Different combinations of the heating systems were successfully used to enter H-mode on AUG, including NBI+ECRH+ICRF (as in ITER), ECRH+ICRF, and ICRF-only. Similar to the earlier observations in H-$^4$He plasmas with hydrogen NBI and ECRH heating on AUG [6], the L-H transitions were reached at $P_{\rm LH} \approx 2-3\,{\rm MW}$ ($n_{e0} \approx 4 \times 10^{19}\,{\rm m}^{-3}$). Another important result of our studies on AUG is the demonstration that the 3-ion ICRF scheme with off axis $^3$He heating is compatible with avoiding tungsten accumulation. The 3-ion ICRF scheme with core $^3$He heating was also applied on AUG, resulting in new and interesting fast-ion physics effects, including the first observation of $^3$He-driven ion cyclotron emission on this tokamak. 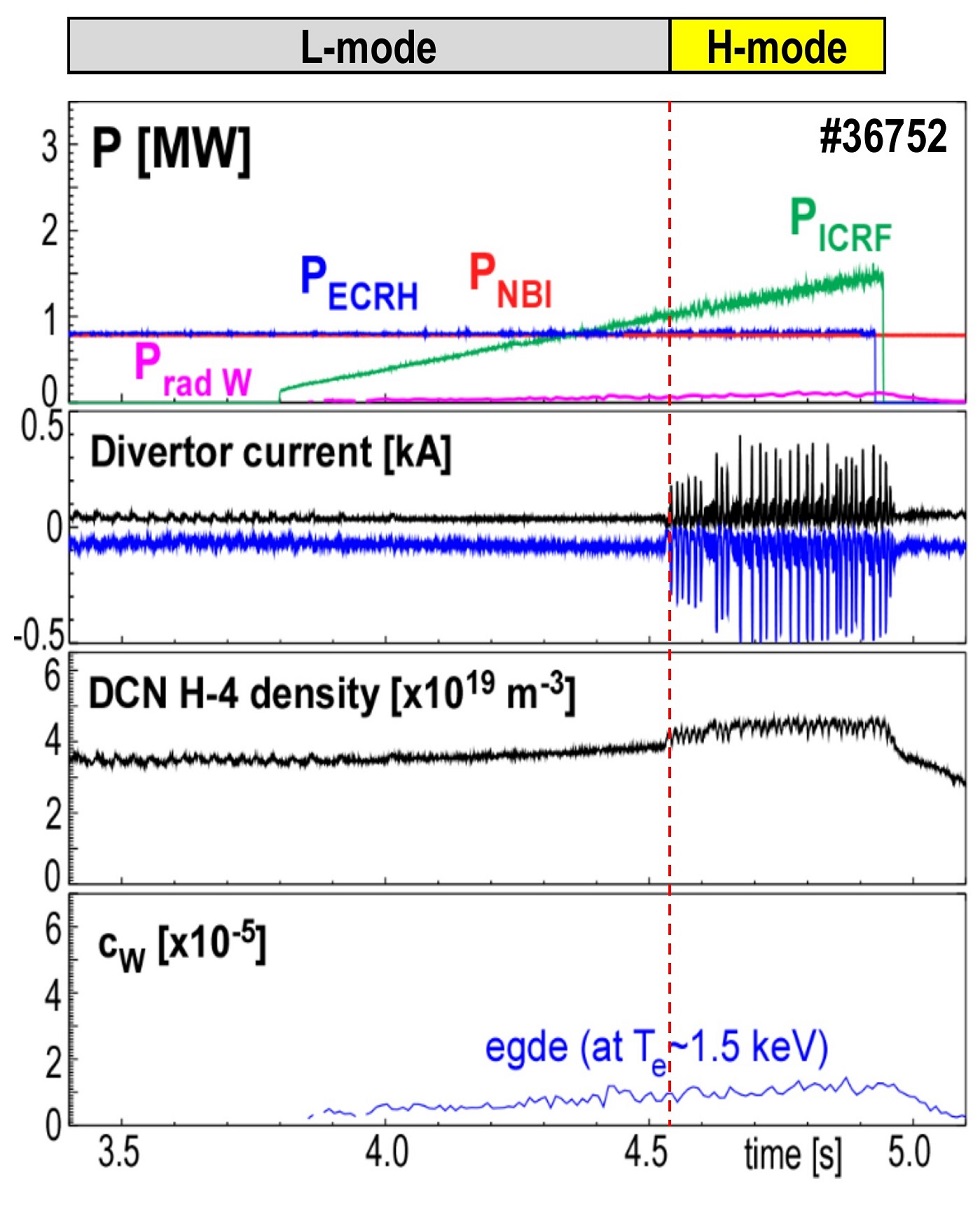 In JET-ILW, we further advanced the 3-ion ICRF technique for heating mixed plasmas using injected fast NBI ions as a resonant ion component. Following the success of studies in H-D plasmas [7, 8], a controlled acceleration of D-NBI ions to higher energies with ICRF was recently demonstrated in mixed D-$^3$He plasmas. Figure 2 (a) shows an overview of JET pulse #94701 (3.7T/2.5MA), in which $6\,{\rm MW}$ of ICRF was applied in combination with $8\,{\rm MW}$ of NBI. The neutron rate was increased from $0.6 \times 10^{15}\,{\rm s}^{-1}$ in the NBI-only phase to $1.0 \times 10^{16}\,{\rm s}^{-1}$ in the combined ICRF+NBI phase of the pulse. For comparison, we also illustrate the plasma performance for the NBI-only pulse #94704 (characterized by dominant ion heating in the plasma core), which was performed at the same operational conditions as #94701. The stronger $T_{e}$ peaking and much higher $T_{e0}$ and neutron rate in pulse #94701, as compared to #94704, are easily understood by the presence of high-energy D ions due to efficient central deposition of ICRF power. However, the comparison of the measured plasma stored energy, $T_{e}$ and $T_{i}$ profiles at the same total auxiliary heating power ($P_{\rm aux.} = 14\,{\rm MW}$) and plasma density ($n_{e0} \approx 6 \times 10^{19}\,{\rm m}^{-3}$), as shown in Figs. 2 (b) and (c), hints at a significantly reduced transport in pulse #94701, characterized by a large fraction of fast ions in the plasma core. The analysis of pulse #94701 using the gyrokinetic code GENE is ongoing, aiming to understand better the transport in JET plasmas under the ITER-relevant conditions of dominant fast-ion electron heating in the plasma core and identify possible fast-ion effects on microturbulence. The observation at JET that in such plasmas $T_{i} \approx T_{e}$ is very promising for ITER, and is in line with recent theoretical studies showing that alpha particles can significantly stabilize ITG turbulence and reduce heat transport in ITER [9]. Furthermore, the developed 3-ion ICRF scheme in mixed D-$^3$He plasmas was used as a tool to generate alpha particles and validate successfully updated JET diagnostics for alpha measurements prior to future D-T operations [10]. 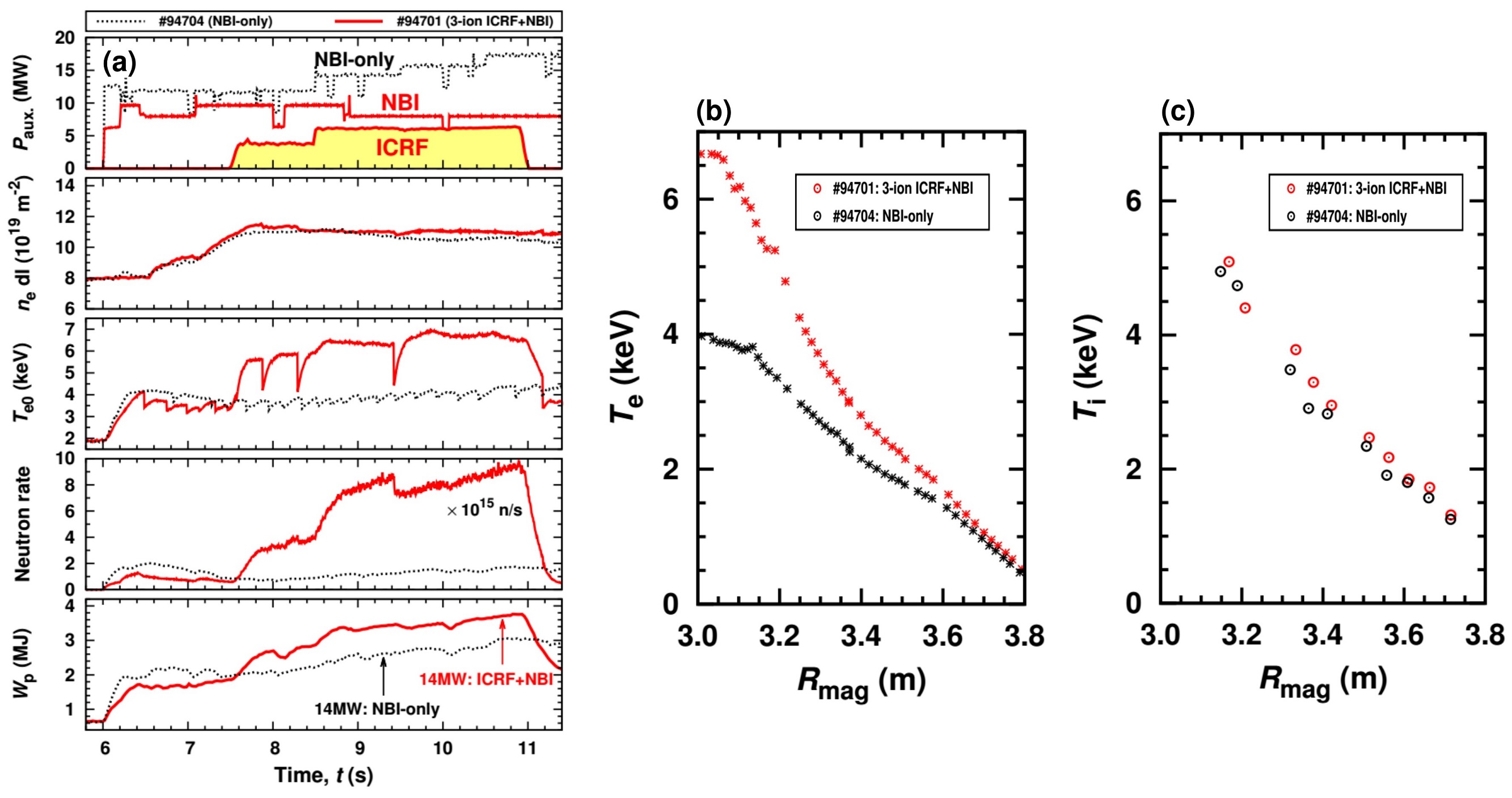 The discussion of recent experimental studies on AUG and JET is complemented by illustrating the synergy between experimental and modeling developments in this field of plasma physics [8, 11]. An outlook of possible applications of the 3-ion schemes in JET and ITER is discussed, including promising schemes for the demonstration of alpha particle effects in the upcoming D-T campaign on JET [12], in particular, electron heating by alpha particles. While further more detailed analysis work remains to be done, e.g., better understanding the interaction of the fast ions with the plasma, MHD modes and turbulence, the results obtained recently on JET and AUG confirm the high efficiency of the novel 3-ion ICRF schemes for plasma heating and increase our confidence in extrapolating the application of these schemes to ITER.

Acknowledgements. This work has been carried out within the framework of the EUROfusion Consortium and has received funding from the Euratom research and training programme 2014-2018 and 2019-2020 under grant agreement No 633053. The views and opinions expressed herein do not necessarily reflect those of the European Commission.