Introduction: Disruptions due to tearing mode locking are one of few potential obstacles remaining for successful ITER fusion reactor and beyond. Here, we report the experiments of locking avoidance, but also contributing to the H-mode recovery and sustainment by slowly rotating edge-localized tearing mode (TM) layers by applying 3D external field. The process is expected as a non-linear response to applied external 3D field, static error field and/or their combinations. Preliminary NIMROD simulation are qualitatively consistent with experiment.

Localized edge tearing layer response: It has been discovered that the H-mode recovery with a slowly rotating external 3D field is accompanied by an edge localized tearing layer synchronized with the 3D field. The amplitude of the tearing layer is a few hundred Gauss, suggesting that the perturbed current density must be comparable to the equilibrium current density. In contrast, at q~2 and 3 the response to 3D external field is minimal. One possible hypothesis is that the 3D field facilitates the H-mode recovery and the stable edge tearing layers assist the sustainment of H mode by reducing the influence of error field (EF) and other 3D fields around core including the applied external 3D field. This is consistent with the concept of “screening out” EF and other 3D fields, proposed by refs.$^{1,2}$. These results are with similar dependence as previously reported$^{3}$. We also discuss preliminary results of NIMROD simulation based on experimental conditions.
Figure 1 shows the H-mode sustainment by the NTM locking avoidance with rotating external 3D field and also the successful H-mode recovery after the preprogrammed reduction of NBI torque input terminated the H-mode phase ( the total NBI power input level was kept same). In the recovery phase, the ratio of the average density (Fig.1(f)) to the edge density (Fig.1(g)) is near unity, re-establishing the good edge confinement property. The beta_n recovered to the level comparable in the initial H-mode sustainment period (Fig.1(c)). However, The further gradual increase of the 3D field by upper/lower I-coils current ~3.2 kA (Fig.1(d)) reduced the density gradient at the edge together the beta_n decrease (Fig.1(e,g)), indicating that the fine optimization of the external 3D fields pattern is the key for sustaining high plasma confinement performance.

Reconstructed plasma response: Figure 2 shows the time-evolution of the localized TM layer response amplitude by the perturbed vertical field component dBz measured with Motional Stark Effect (MSE) in the H-mode recovery period (3300-3520ms). Two cycles of oscillation were decomposed by taking the covariance with external magnetic sensor signals (n=1, 2, 3). Although the radial coverage by MSE measurements are limited, the localized tearing layer expanded from edge to q=3 domain with I-coil current increase(Fig.2(b)). The magnetic response around q=2 (Fig. 2(c,d)) is minimal with lower 3D field just after H-mode recovery up to beta_n maximum time period. With increasing 3D field, the response below q=2 became finite and is synchronized from the core to the edge (Fig.2(e)). Thus, the higher 3D fields impacts on the structure from edge to core rather than functioning as the screening-out. (Similar dependence was observed on the ion rotation and ion temperature perturbation, not shown). 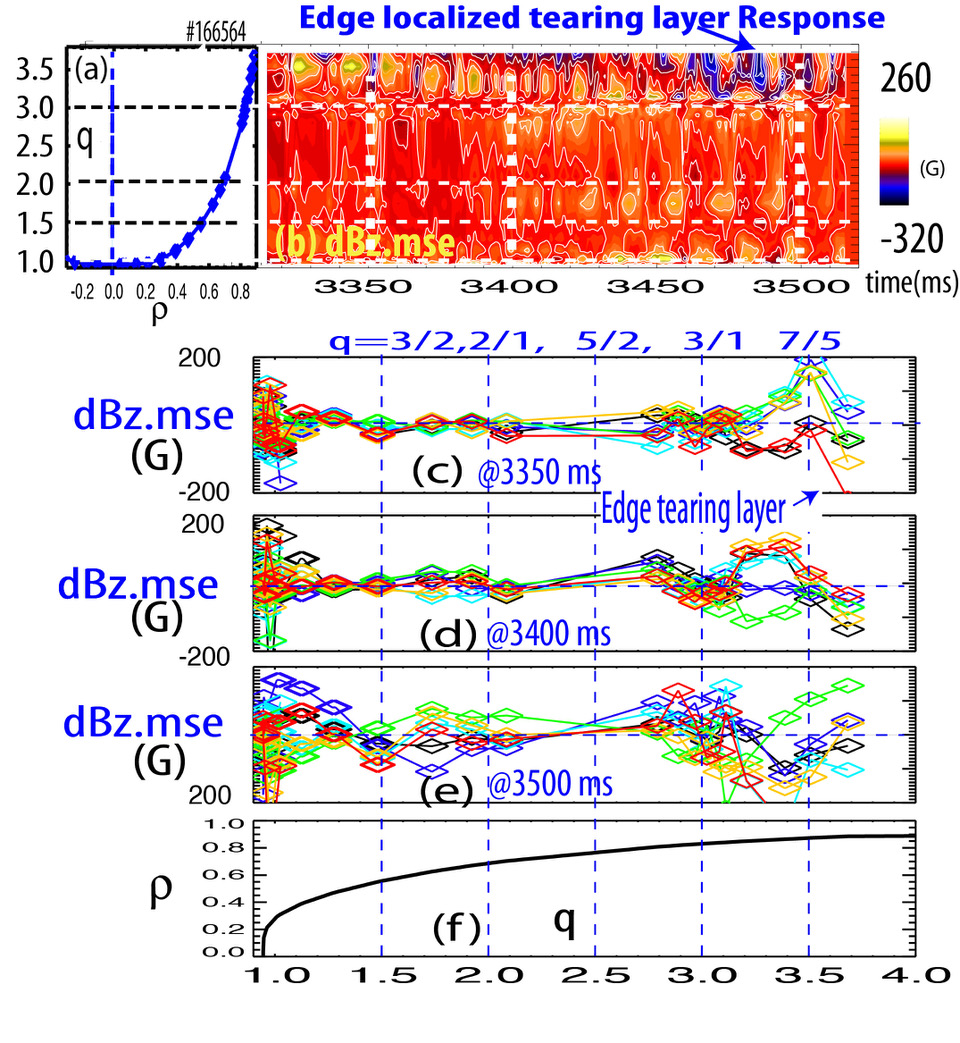 NIMROD simulation: Figure 3 shows two results of slow and fast (Ω = 3×10$^{4}$, 9×10$^{4}$ rad/s) rotation of the external 3D field by plotting the n=1 perturbed dBz field along the outboard mid plane. The calculation was performed using experimental equilibrium profile parameters (at 3445 ms), including the near-zero plasma rotation due to the 3D field viscous damping. The external 3D field pattern includes multi-poloidal components, but was simplified to a mix of 2/1, 3/1, 4/1 and 3/2. The EF was not included in this calculation. The plasma resistive timescales are roughly 100 times faster than in the experiment, with S = 3.5×10$^{6}$ the Lundquist number (ratio of the resistive to Alfven time). The radial derivative of dBz is the indicator of the appearance of a perturbed toroidal current at the rational surface. For slow 3D field rotation, the radial derivative of dBz increases around q=2 (rho~0.67). On the other hand, for fast 3D field rotation, the variation of radial derivative of dBz is minimal. This result is similar with the expectation from the screening-out m=2 component of 3D field coupled to the plasma response near the edge, but without error field, which can be explained by taking into account of the relative velocity of the rotating external 3D field and the static error field EF on the mode-moving frame (1,4). The relative frequency can be large enough to induce the screening effect simultaneously for both fields. The detail analysis has just begun.

Summary: The slowly-rotating 3D external magnetic field, by inducing the edge localized TM layers, can not only avoid tearing mode locking, but also screen both the static error field EF and external rotating 3D field. The present operational frequency range is several tens-Hz. If the frequency limit is related to the resistive-wall frequency (this seems to be the case in the DIII-D experiment), in the ITER and fusion reactors the effective resistive-wall frequency with blanket is expected lower than one-Hz. Thus, this slowly-rotating 3D field application seems to become very practical. Furthermore, this slowly rotating 3D field approach can serve as a tool to control actively the plasma flow velocity at various rational surfaces utilizing multi-3D field patterns. This could assist the plasma performance optimization from the plasma core to the edge.