Prof. Yoneyoshi Kitagawa (The Graduate School for the Creation of New Photonics Industries)

A world-class ultraintense laser LFEX at ILE, Osaka University directly heated a CD shell target, imploded by GEKKO XII(GXII) laser. Illuminating LFEX energy of 246 J increased the core internal energy by $23\pm 3$ J, leading to the conclusion that the heating efficiency is $9\pm 0.8$ %. The results encourage the fast ignition scheme fusion as a hopeful candidate of the fusion machine.

For the fast ignition fusion[ref1], the direct illumination of an ultraintense laser onto the core is the simplest technical and economical way. To demonstrate the feasibility of direct core heating, we have performed experiments with difficult illumination configurations, such that (a) LFEX is coaxial to the GXII bundled beams axis (Fig. 1(a)), and (b) LFEX is transverse to the axis (Fig.1(b)). (a) mode will be the simplest scheme, but the cutoff point is far from the core and much plasma clouds may block the hot electron and ion transports[ref2]. (b) mode may not be so simple to operate the power plant, but the cutoff point is close to the core and there are less cloud plasmas, which block the transport[ref3]. However, because the transverse mode results are not yet confirmed, we concentrate to the axial (a) mode. Counter illuminating 6 beams from the GXII has imploded a CD shell target. Ratio of shell radius $R$ to focal distance $d/R$ is -3. LFEX laser is directly focused to the core center.
The intensity on target is $0.5\sim 1\times10^{19}$ W/cm$^2$. We have estimated the LFEX fast heating efficiency from the following procedures.

An x-ray streak camera, in Fig. 2 (b), shows both the core emissions due to the implosion +200 ps after the GXII peak and the LFEX heating +600 ps after. The intensity of core emission here is same as that without LFEX, but once LFEX is just on the compression, as in Fig. 2 (c), the core emission becomes $\sim$20 times stronger than the emissions without LFEX. The stagnation period $\tau$, within which the maximum compression continues, $\leq 50$ ps. We assume that the neutron generation period is also close to $\tau$. 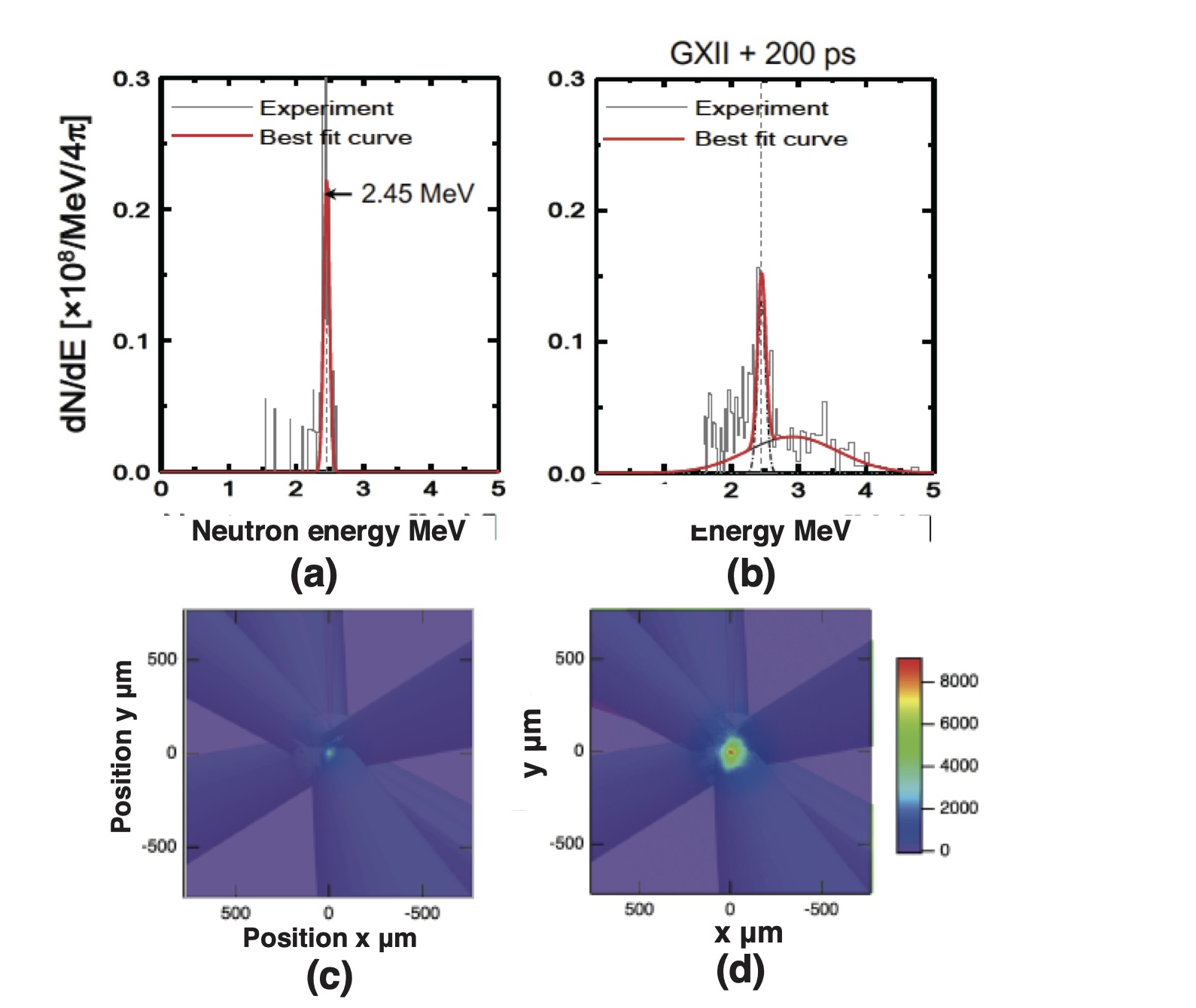 We will discuss the transverse mode later on.