We developed a hydrogen population code by combining the Neutral-Transport code with the rovibrationally resolved Collisional-Radiative model (NT-CR), EMC3-EIRENE code, and the Molecular Dynamics (MD) simulation of carbon (C) and tungsten (W) divertor plates. Using this code, (i) we successfully treated hydrogen molecule H$_2$ reactions relating to the molecular assisted recombination (MAR), which plays a significant role in the detached plasmas. Moreover, (ii) we calculated the H$_2$ population which is transported from the divertor plate in LHD plasma. (iii) We identified the H$_2$ MAR reaction which reduces the kinetic energy of plasma in the divertor region most dominantly. We also found that (iv) the distribution of the H$_2$ population near the divertor plate becomes the Boltzmann distribution, which is consistent qualitatively with the estimation by emission spectroscopy of the Fulcher-$\alpha$ band of H$_2$ in LHD.

Plasma detachment is one of the expected phenomena to decrease the heat flux to the divertor plate. It is pointed out that the MAR plays a significant role to decrease the heat flux in the detached plasmas. To analyze the MAR, Sawada, et al.[A] developed the NT-CR code and they found that the rate coefficients of H$_2$ MAR reactions in the divertor plasmas strongly depend on the initial rovibrational state of H$_2$. Neutral transport codes are widely used to analyze divertor plasmas. However, the H$_2$ rovibrational population has not been calculated in other neutral transport simulation codes prior to our NT-CR code. By combining the NT-CR code; EMC3-EIRENE code; and the MD code of C and W divertor plates, we successfully calculated each H$_2$ population with the vibrational state ($v$) and rotational state ($J$) at any position in plasma. In our combining code, the roles of the three codes are as follows. (R1) The spatial distributions of the electron temperature (T$_\textrm{e}$) and density (n$_\textrm{e}$) in plasma are calculated using the EMC3-EIRENE code[B]. (R2) The initial H$_2$ rovibrational state is calculated for carbon or tungsten divertor plates by the MD code[C]. (R3) Using T$_\textrm{e}$ and n$_\textrm{e}$ from R1 and the initial H$_2$ rovibrational state from R2, the NT-CR code calculates the H and H$_2$ populations in the plasma. Here we comment that the initial H$_2$ states depend on the material structure of the divertor plate, especially in tungsten. As the first attempt, we adopted the amorphous carbon or the crystal tungsten, respectively (see Fig.1).

In case 1, we evaluated the H$_2$ rovibrational population produced in the LHD plasma as Fig.2[D]. The H$_2$ populations on the surface of the divertor plate (the purple line in Fig.3) reduce to the population at the point X (the red line), which means that the high J-components of the H$_2$ population disappear by MAR reaction while the H$_2$ is transposing from the divertor to the point X. After all, the J-dependence of each H$_2$ population at Point X for $v$ = 0,1,2 becomes the Boltzmann distribution as the red lines in Fig.3, which is consistent qualitatively with the estimation (Fig.4) by emission spectroscopy of the Fulcher-$\alpha$ band of H$_2$ in LHD.

In case 2, we focus on the divertor plasma region where the MAR is expected to be more dominant than in the core plasma region. Using the combining code, we discovered that the excitations of H$_2$ between the vibrational states remove the kinetic energy from the plasma under a certain detached plasma condition. Moreover, the excitations for $J$=0 is the most dominant. This discovery cannot be achieved by other simulation codes because of the following two reasons: (a) MD can analyze the rovibrational state of H$_2$ generated from the plate. On the other hand, other simulations of the plate ($\textit{e.g.}$, binary collision approximation, phenomenological wall model) are quite difficult to consider the rovibrational level of H$_2$. (b) Our NT-CR code can treat the reactions related to the rovibrational level of H$_2$, whereas the other NT codes seldom include the rotational level processes.

Last, in case 3, we also consider tungsten bcc-crystal Fig.1 for the divertor plate. We perform the MD and NT-CR simulations similar to that in the carbon target. Thus we obtain the rovibrational population of H$_2$ for the tungsten, which is smaller than the carbon case. The reason is as follows: the tungsten crystal generates H$_2$ much less than the amorphous carbon. However, the tungsten surface becomes more complicated as the plasma irradiation time becomes longer. 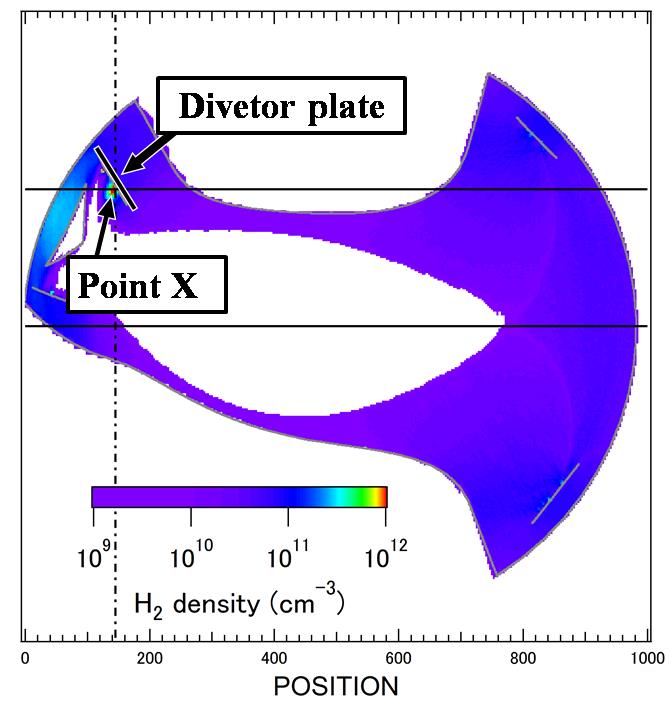 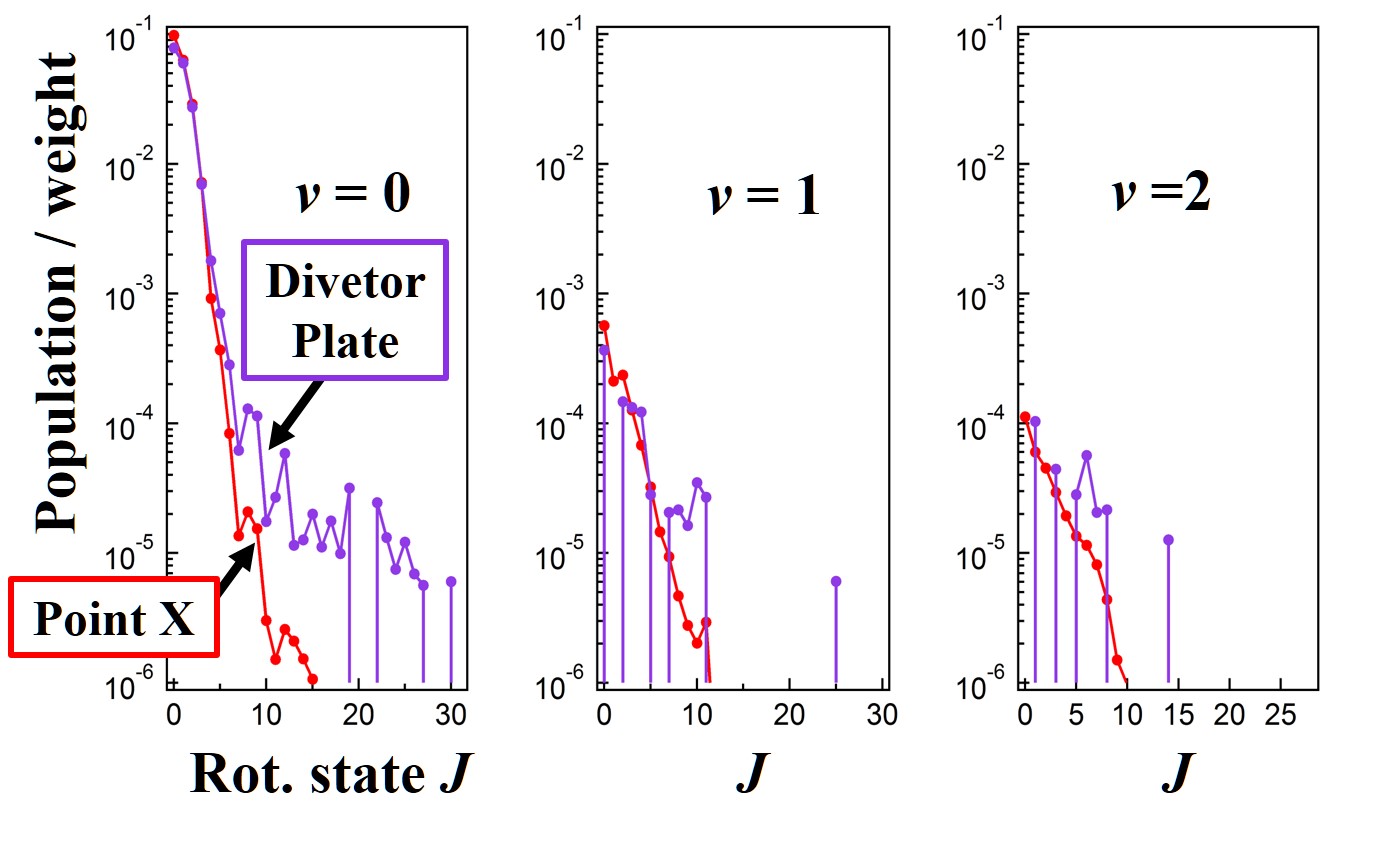 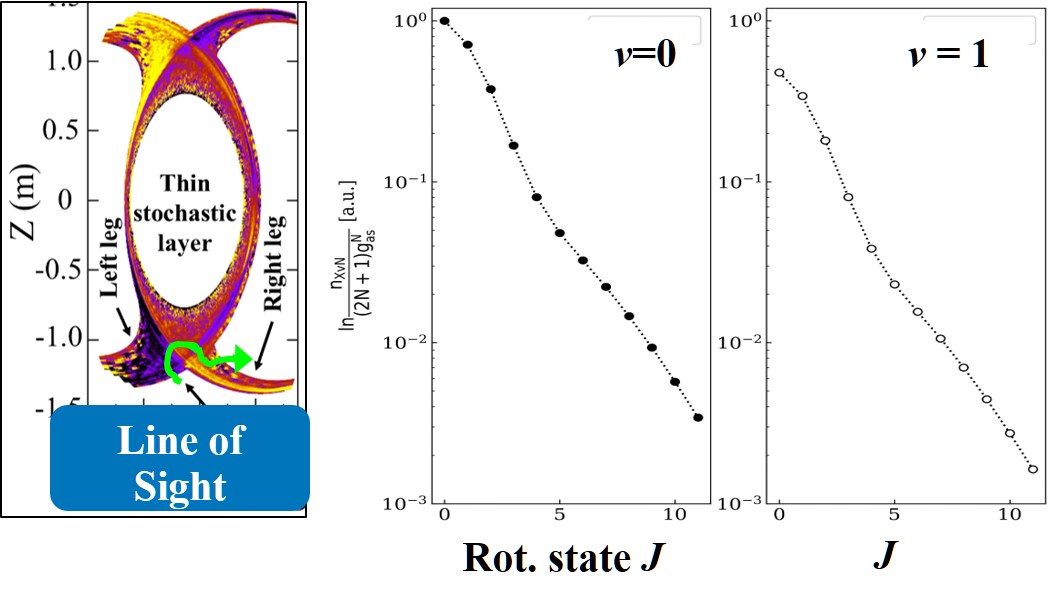