The ADITYA Upgrade (ADITYA-U) is a medium sized (R0 = 75 cm, a= 25 cm) tokamak having toroidal graphite limiter, configured to attain shaped-plasma operations with an open divertor in single and double-null configurations [1]. The foremost objective of ADITYA-U is to prepare the physics and the technological base for future larger tokamaks by expanding the ADITYA-U operating space and by performing dedicated experiments for validation of physics models. Since the 2018 IAEA-FEC Conference, ADITYA-U operations have been mainly devoted on realizing the plasma parameters close to the design parameters of circular plasmas in limiter configuration and also the initiation of shaped plasma operation. Emphasis has been given to novel experiments on runaway electrons (REs) and disruption control in the ADITYA-U [2]. Furthermore, experiments on radiative-improved modes using Ne, Ar gas injection, modulation of MHD modes [3] and edge turbulence using periodic fuel gas-puffs, density dependence of plasma toroidal rotation reversal [4], fuelling using SMBI etc.
For the typical discharges in ADITYA-U, in absence of any strong pre-ionization, the gas breakdown and successful plasma start-up is normally achieved with peak loop voltages of ~ 18 – 20 V (Electric field ~ 4.5 V/m). 42 GHz ECR [5] assisted low loop voltage (~10 – 12 V, Electric field ~2.1 V/m) start-up was successfully achieved with wave launched in fundamental O-mode from low field side. The toroidal magnetic field is ~ 1.4 T. Plasma discharges having plasma current ~ 170 kA, plasma duration ~ 330 ms, chord-averaged electron density ~ 2 – 6 x 10^19 m^-3 and central electron temperature ~ 300 – 500 eV has been achieved. The time evolution of typical high current, longer duration discharge of ADITYA-U is shown in Figure 1 and the overall progress of plasma current and duration enhancement during the year 2018-2019 are shown in Figure 2(a) and 2(b) respectively. Repeated cycles of vacuum vessel baking up to 135° C, followed by extensive wall conditioning using novel techniques [6] along with lithium coating [7] resulted in substantial reduction in partial pressures of various mass species and achievement of lower base vacuum of ~ 6 x 10^-9 Torr. Successful recovery of volt–sec along with adequate control of real-time horizontal plasma position and multiple gas puffing led to the achievement of longer discharge duration discharges in ADITYA-U. 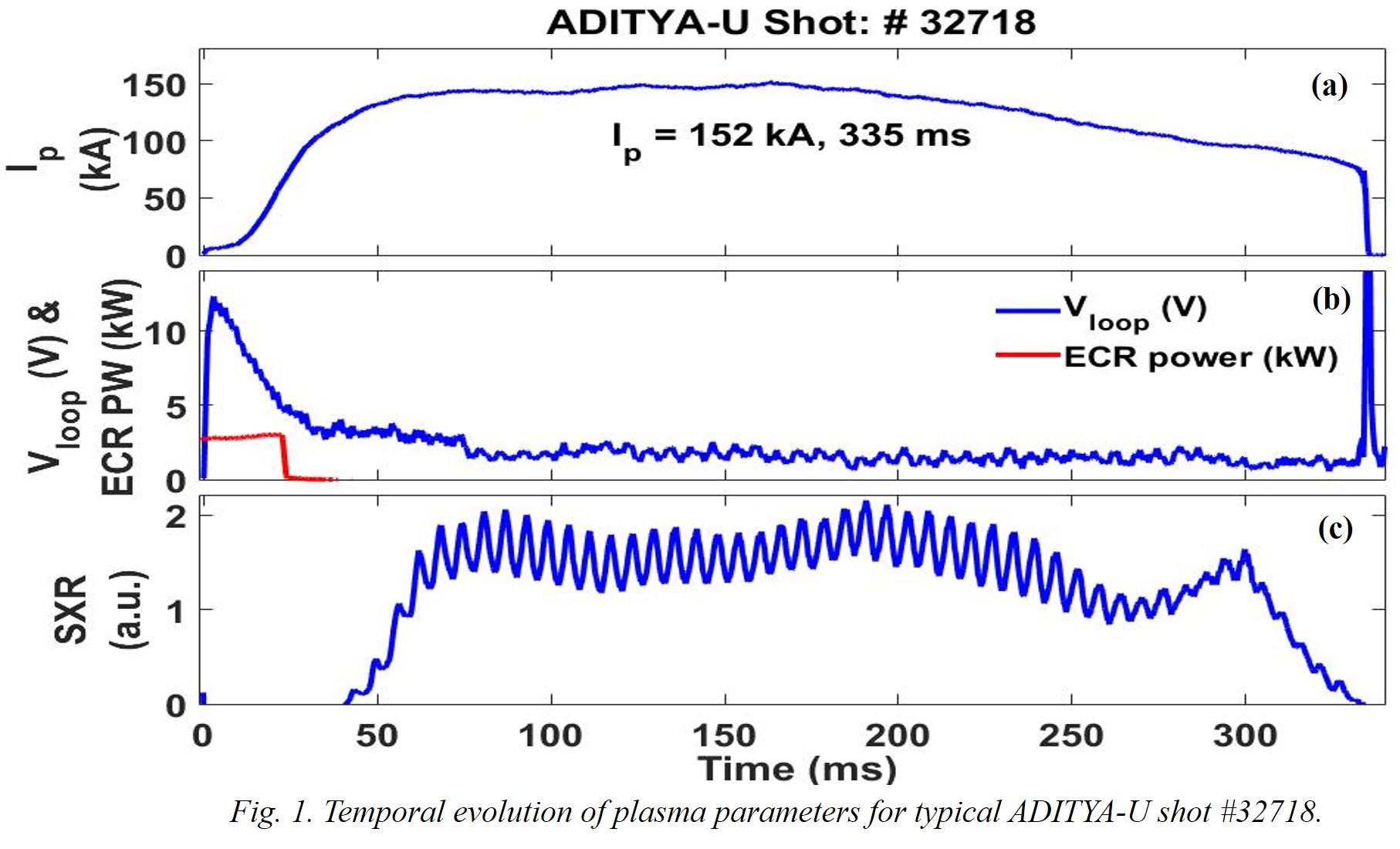 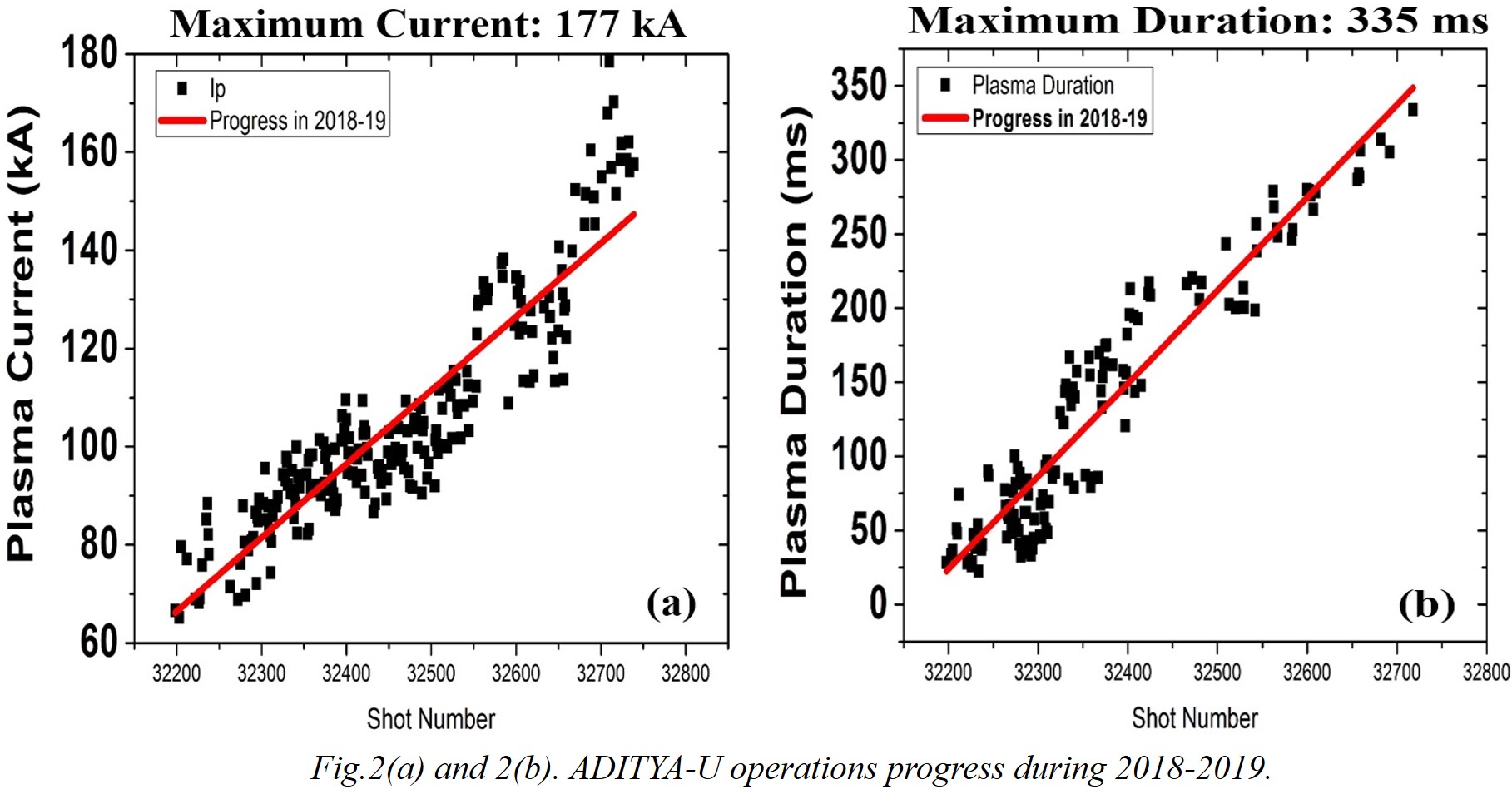 Over the last two years, significant progresses have been achieved in ADITYA-U experimental research including, 42GHz ECR assisted low loop voltage start-up and heating experiments, electromagnetically driven pellet impurity injector for injecting micron size particles at high velocity (~220m/s) to understand disruption mitigation, wall conditioning by using different techniques of lithium coating, formation of runaway beam and its avoidance, Neon and Argon impurity injection for radiative improved modes, suppression of electrostatic fluctuations using hydrogen gas puff and its correlation with hard X-rays, effect of positive edge electrode biasing on drift tearing modes and runaway transport and effect of SMBI with edge safety factor (qedge), toroidal rotation reversal threshold studies etc. Dependence of current quench time (CQT) on qedge during disruptions and relation of CQT on the prevailing MHD activities prior to disruption has been studied in detail. Discharges with low qedge showed a high CQT compared to those observed at high qedge. Exploring the RE formation mechanisms, controlled RE generation experiments have been carried out by lowering the plasma density and adjusting the vertical magnetic field as shown in Figure 3 (#33061). 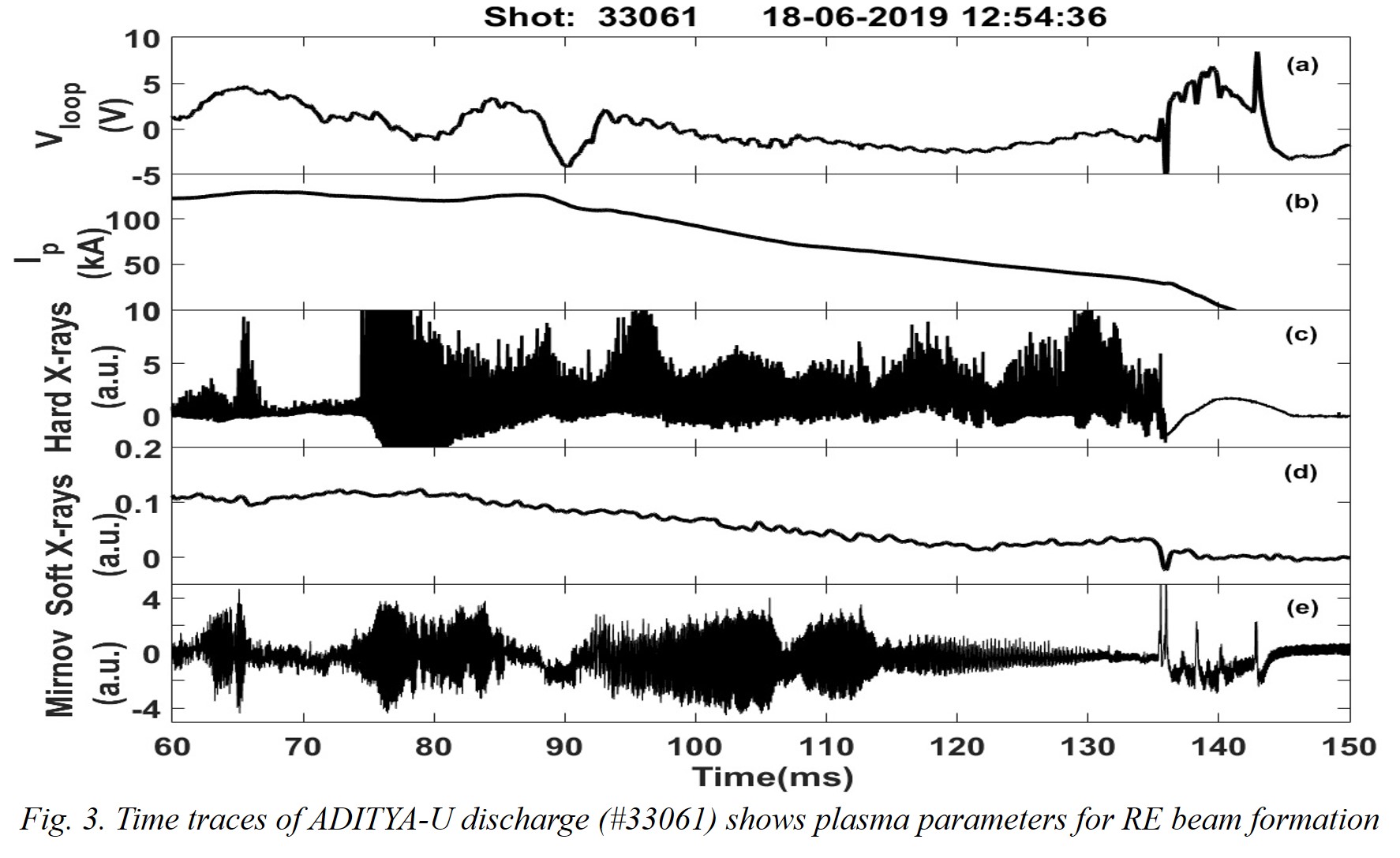 Fast visible imaging video camera, used for 2D tangential viewing, captured images which showed features of the RE beam formation with high spatial and temporal resolution as shown in Figure 4. This RE beam generation in controlled fashion is very useful in studying the mitigation techniques of REs using different techniques as the prevention of such RE beam is of a vital importance in future tokamaks, especially in the ITER, because of its potential danger to the plasma facing components. 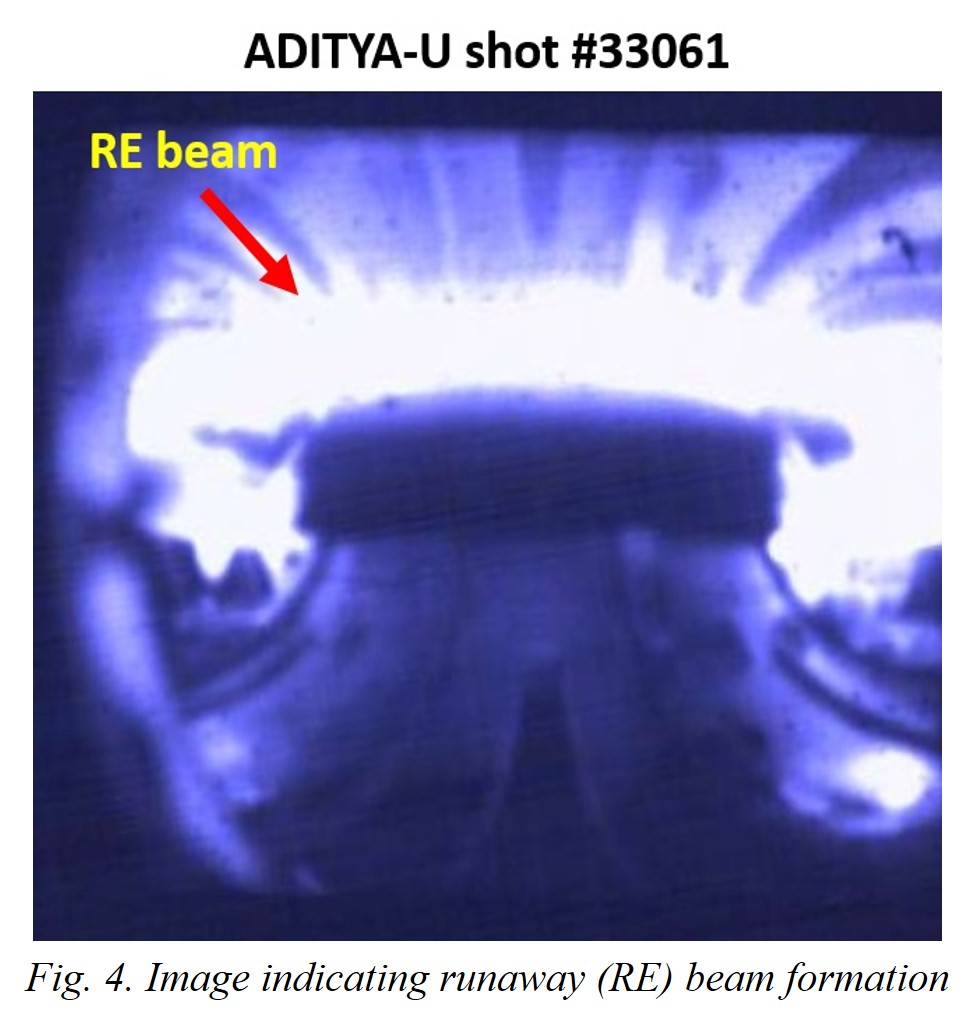 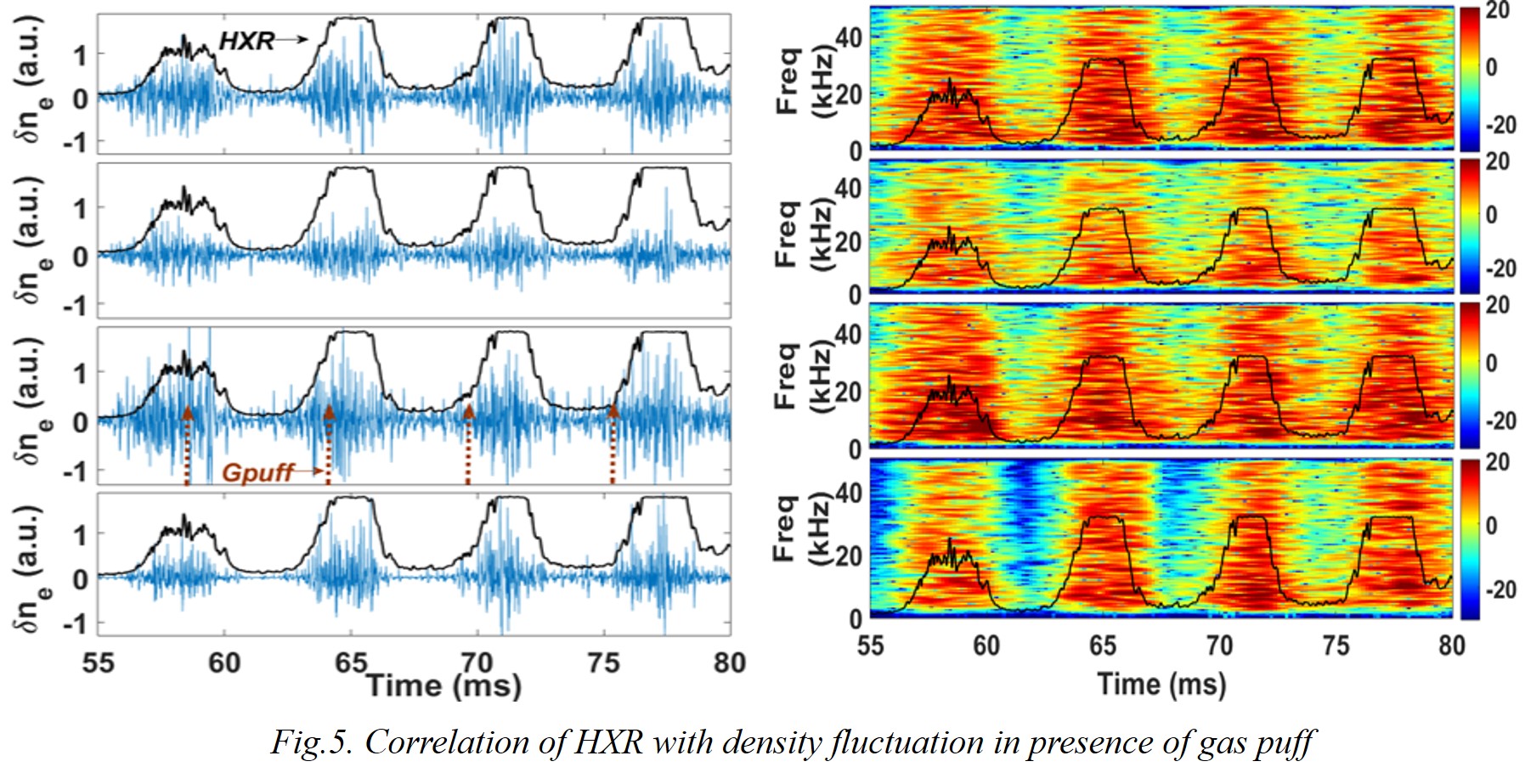 In another interesting experiment, the REs are confined by applying a voltage to an electrode placed at the edge region of the plasma prior to the disruption. Figure 6 shows the multiple pulses of biasing applied to an electrode placed ~ 2.5 cm inside the LCFS for the shot #33336. The last pulse of biasing coincides with the plasma disruption as shown in Figure 7, describes that in presence of biasing during the disruption, the HXR intensity as well as HXR flux persists for ~10 ms even after the termination of the plasma current. A possible mechanism of confinement is the Er x BΦ motion of REs after the disruption, where the Er is generated by electrode biasing. 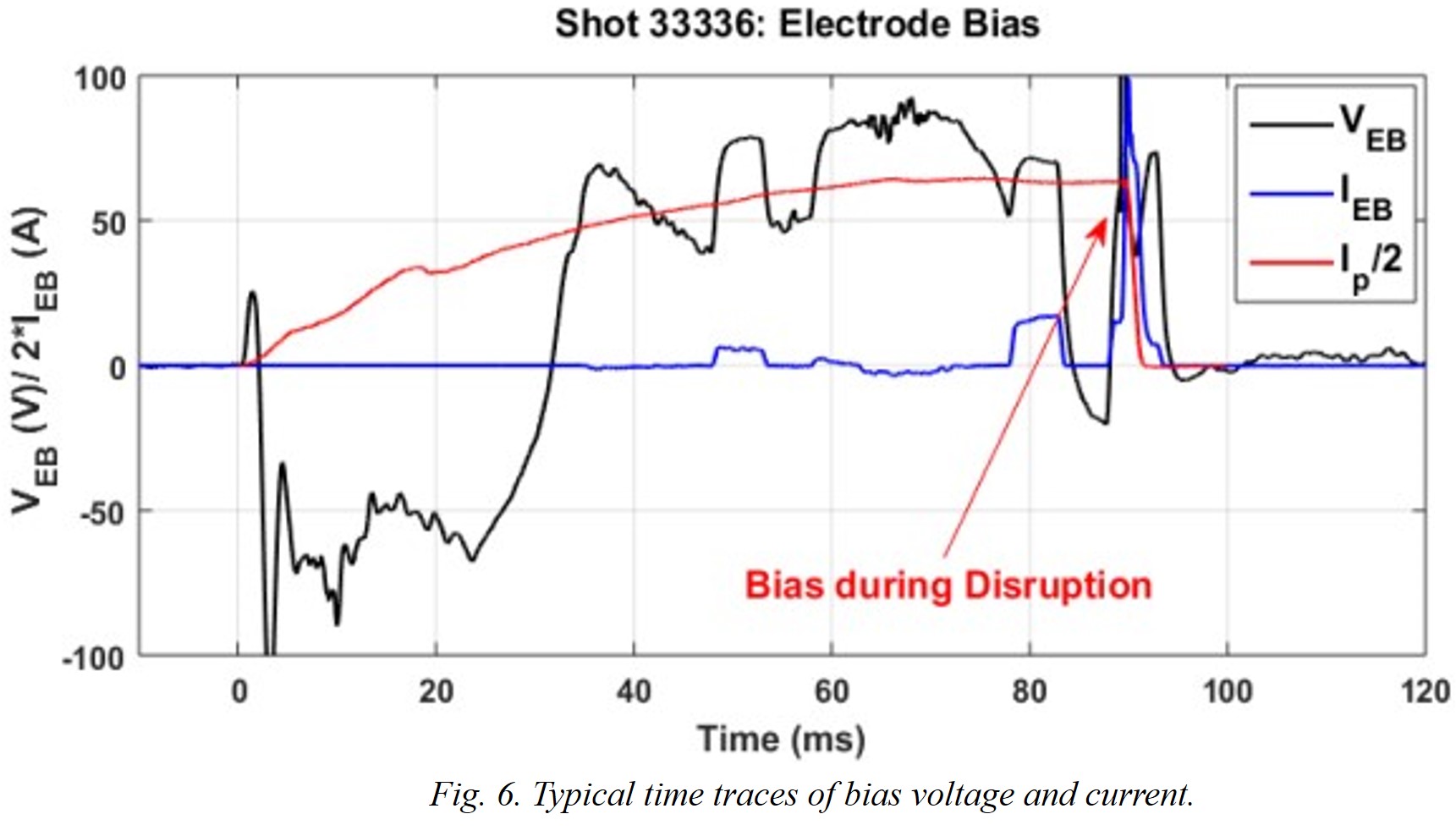 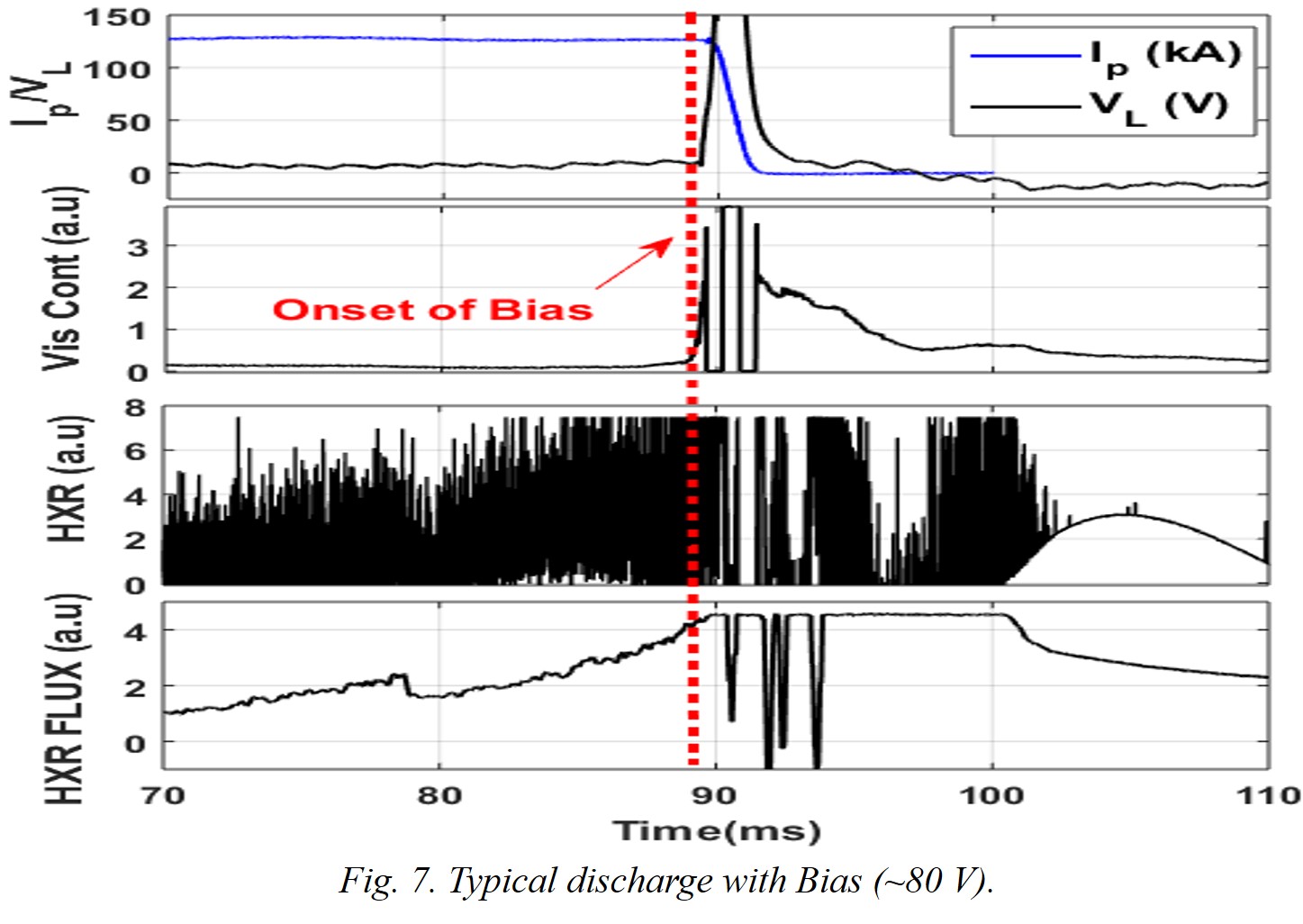 For the first time, ADITYA-U has experimentally demonstrated the use of electromagnetically driven payloads for particle injection into the tokamak plasmas for disruption mitigation studies. The impurity particles reached the core of the plasma within ~ 1.25 ms and causes fast termination of plasma current and radiate the whole plasma energy in ~ < 2 ms. Furthermore, the preliminary experiments related to plasma shaping by charging the divertor coils during plasma current plateau, confinement improvement with ion cyclotron resonance (ICRH) assisted auxiliary heating and deuterium injection is undergoing and the results of the same will be presented. This paper summarizes the experimental research of ADITYA-U tokamak in the key areas of thermo-nuclear fusion over the last two years.