A fusion reactor based on a stellarator design has the advantage of an easier access to long pulse scenarios. In fact, one of the main goals of Wendelstein 7-X (W7-X), the largest advanced stellarator in the world, is to demonstrate the steady-state capabilities of the stellarator line. From 2022 onward, all plasma-facing components will be water-cooled, which should enable pulse duration of up to 30 minutes with up to 10 MW of ECRH input power. Therefore, in the recent campaign [1,2] a number of experiments were performed in order to prepare long pulse operation, addressing issues like the development of stable detachment, control of the heat and particle exhaust and the influence of leading edges on plasma performance. We have shown that an island divertor is a good concept for steady state heat and particle exhaust. A highlight of the recent campaign was a robust detachment scenario, which allowed removing power loads due to direct contact of divertor target plates with the plasma, while reaching neutral pressures at the pumping gap entrance yielded the particle removal rate close to the values required for stable density control in steady state operation.
The heat and particle exhaust in W7-X is realized with help of an island divertor [1], which utilizes large magnetic islands at the plasma boundary. In the so-called “standard configuration” with $n/m$ = 5/5 islands at the boundary attached plasmas showed very efficient heat flux spreading and favorable scaling with input power. 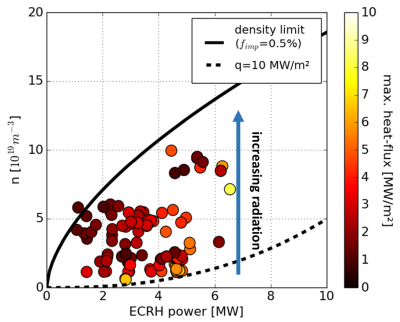 In Figure 1 an overview of peak heat loads to all 10 divertors is shown. At a given input power, there is a plasma density range which yields divertor heat flux below allowed 10 MW/m$^2$. For attached plasmas with $P_{\rm ECRH}\leq6$ MW, $q_{\rm max}$ was typically in the range of 4 to 6 MW/m$^2$, which, when extrapolated to 10 MW of input power, provides a safe operational range at line integrated plasma densities above $5∙10^{19}$m$^{-2}$.

Increasing ne leads to increasing plasma radiation and at radiation fractions $f_{\rm rad}>0.8$ to complete plasma detachment. The detachment regime led to a significant reduction of the divertor heat and particle fluxes. An example of a 30 second discharge [3] with peak heat flux reduced by factor of 9 is shown in Figure 2. Although a significant local up-down asymmetry due to edge drifts [4] is observed in the attached state at $t$ < 3 s, it vanishes when transitioning into detachment. In the downstream (near-target) region of the SOL, Langmuir probes show a drop of the electron temperature from ca. 30 eV to ca. 5 e V. Additionally, Coherent Imaging Spectroscopy shows that during detachment the parallel flow velocity of C2+ in the scrape-off layer is significantly reduced [5].
Before the onset of detachment, the values of the downstream electron density are significantly higher ($1.2-1.4\cdot 10^{20}$ m$^{-3}$) than electron densities near the separatrix (ne,sep is in the range $4-6\cdot 10^{19}$ m$^{-3}$. This difference between upstream and downstream density indicates that the divertor operates in the high recycling regime. This detachment regime is characterized by low impurity concentration ($Z_{\rm eff} = 1.5$) and high neutral pressure ($p_n \leq $ 0.1 Pa) in the subdivertor volume. Estimates of total pumping rate for detached discharges at ca. 0.6$\cdot 10^{21}$ [atoms/s] show that at these neutral pressures particle exhaust is at the level required for steady-state operation. As the radiation characteristics of carbon is similar to that of nitrogen, the results obtained here should to a large extent be valid for detachment driven by nitrogen seeding [6] . In steady state W7-X will operate with continuous pellet fueling, therefore also several discharges were performed to see if it is possible achieve stable detached scenarios with plasma density stabilized with low frequency pellet injection. 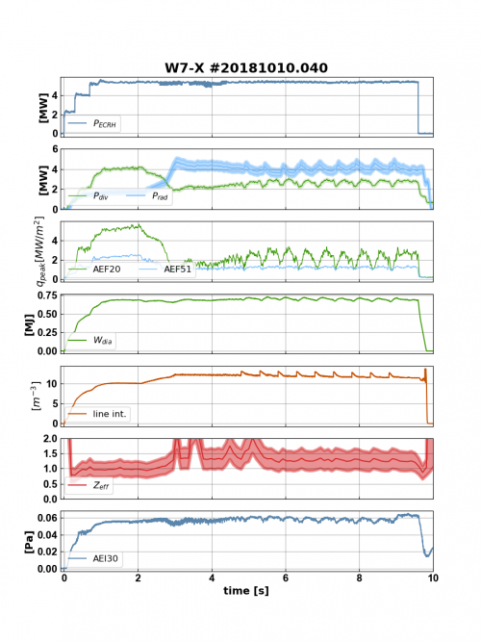 An example of such a discharge is presented in Figure 3, where peak heat flux is reduced from ca. 5 MW/m$^2$ to ca. 2 MW/m$^2$, neutral pressure at the pumping gap is kept at 0.06 Pa and Zeff stays at the level of ca. 1.2.
As W7-X is a low shear device, edge islands are sensitive to changes in toroidal current [7]. Several measures to counteract strike-line movements induced by the plasma current evolution were tested, e.g. by use of external coils or ECCD. An essential issue of long pulse operation is impurity control. A series of experiments were performed to study the behavior of intrinsic impurities as well as seeding low and highly recycling species to enhance plasma radiation. Overall W7-X shows good impurity control in low and high density discharges with Te/Ti > 1. We have found that despite high influx of carbon into the SOL during discharges with dedicated overloading of the leading edges, the plasmas remained stable. Line-of-sight averaged Zeff stayed below 1.5 throughout the discharge and radiation increased at the plasma edge only.
The results presented in this work form a promising outlook on the overall steady state compatibility of the detached island divertor concept in future experiments and a stellarator-based reactor.