Diverted discharges at negative triangularity on the DIII-D tokamak (figure 1a) sustain normalized confinement and pressure levels typical of standard H-mode scenarios ($H_{98,y2}\simeq 1$, $\beta_N\simeq 3$) without developing an edge pressure pedestal (figure 1b), despite the auxiliary power far exceeding the L→H power threshold expected from conventional scaling laws. The power degradation of confinement is substantially weaker than the ITER-89P scaling (figure 2), resulting in a confinement factor that improves with increasing auxiliary power. The absence of the edge pedestal is beneficial in several aspects, such as eliminating the need for active mitigation or suppression of Edge Localized Modes (ELMs), low impurity retention and a reconstructed Scrape-Off Layer (SOL) heat flux width at the mid-plane that exceeds the measured H-mode value by approximately 50%. 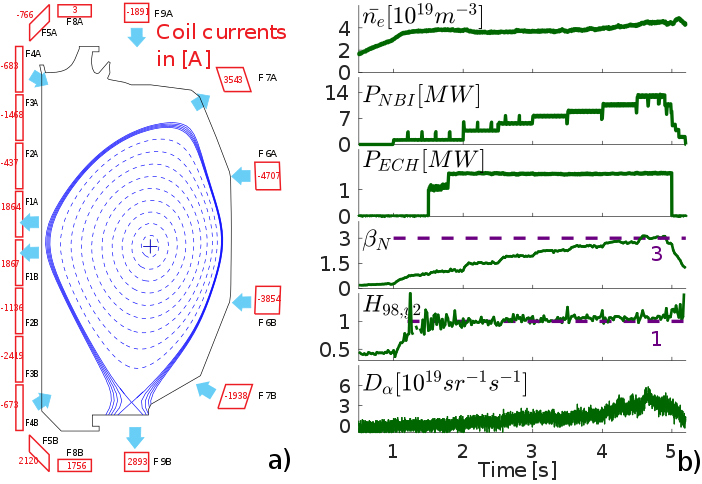 High confinement L-mode edge plasmas at negative triangularity previously obtained in inner-wall limited plasmas on DIII-D$^1$ have been recently extended to diverted configurations by creating a novel lower single null equilibrium. This plasma shape features top-bottom averaged triangularity that is negative and is compatible with operations at high auxiliary power on DIII-D. In particular, the X-point was placed at the outermost radial location that allowed strike points not to impinge on the outer wall, thereby making a near zero lower triangularity, while the separatrix above the mid-plane features strong shaping with upper triangularity $\delta_u$ = -0.4. The successful creation of this unusual shape was streamlined by the flexibility of the DIII-D control system, which employed recently installed bipolar power supplies for the creation and control of the X-point as well as a full predictive simulation of the discharge that minimized the time allocated for scenario development.
Plasmas maintained an approximately constant line averaged density and the effective charge radial profile, $\rm Z_{eff}$, was in the range 1.4-2; this is a significant improvement over previous inner-wall limited experiments$^2$ for which the line averaged density increased with beam fueling and $\rm Z_{eff}$ was as large as three. Discharges were executed at full field, 2 T, and plasma current of 0.9 MA, yielding a safety factor of 4.5 at 95% of the normalized poloidal flux.
The lack of an H-mode transition postulates that the L→H power threshold increases strongly with increasing negative triangularity. Neither inner-wall limited nor diverted negative triangularity plasmas transitioned to a standard H-mode regime despite the fact that the power flow crossing the separatrix greatly exceeded the expected threshold. In one diverted case, when the upper triangularity was accidentally relaxed to $\delta_u$ = -0.2, the standard L→H transition was observed with 2 MW of net auxiliary power, whereas for $\delta_u$ = -0.4 plasmas maintained L-mode edge pressure profiles despite 10 MW of net injection. Previous experiments on the TCV tokamak using a similar shape observed H-mode transitions with $\delta_u$ ~ -0.2, although more extreme values of the upper triangularity were not attempted$^3$. This result needs further study and could make L-mode edge operation a viable candidate for operation in future reactors, provided that the L→H power threshold will remain large enough to prevent plasmas from developing an edge pedestal.
Negative triangularity discharges sustained H-mode grade confinement and pressure levels despite maintaining relaxed edge pressure radial profiles typical of L-mode scenarios. More specifically, plasmas routinely featured relatively high normalized pressure levels up to $\beta_N$ = 3, or $\beta_N/l_i$ = 3, and confinement factor $\rm H_{98,y2}\geq$ 1 while being intrinsically free of ELMs. The confinement factor progressively improved with increasing auxiliary power as a consequence of a much lower power degradation than that predicted by the ITER-89P scaling law, as displayed in figure 2, in substantial agreement with previous inner-wall limited experiments. 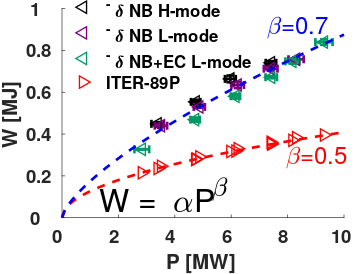 The ratio of the impurity confinement time to the energy confinement time was measured to be lower than that in standard H-mode regimes. The particle confinement time of Aluminum was computed by laser ablating suitable targets and resulted in $\tau_P/\tau_E$ of order unity. As opposed to H-mode regimes, for which such ratio typically reaches or exceeds three, this scenario makes impurity retention less problematic but may make fueling more difficult.
The heat flux width in the Scrape-Off Layer was measured to exceed values measured during H-mode phases. The radial profile of the heat flux was measured by infrared cameras on the divertor plate and mapped at the mid-plane, where direct measurements were not available. While the heat flux width in inter-ELMs phases of the only negative triangularity H-mode plasma obtained matches almost exactly the value predicted by the Eich scaling law, all the L-mode discharges featured heat flux widths larger by about 50%, consistent with increased fluctuation levels in the SOL compared to the H-mode regime.
These L-mode edge plasmas, in view of their H-mode grade confinement and normalized pressure levels, weak power degradation, intrinsic ELM free nature, larger than standard SOL heat flux width as well as low impurity retention, appear to be a viable candidate for operations in future magnetically confined fusion reactors. Technical advantages regarding the manufacturing and maintenance of the divertor and internal poloidal field coils are additional attractive features of this scenario$^4$.