The TCV tokamak continues to leverage its unique shaping capabilities, flexible heating systems and modern control system to address critical issues in preparation for ITER and a fusion power plant. For the 2019-20 campaign its configurational flexibility has been enhanced with the installation of divertor gas baffles and its diagnostic capabilities with an extensive set of upgrades. Experiments are performed in part by topical teams, under the auspices of the EUROfusion medium-size tokamak programme and local teams at the Swiss Plasma Center together with international collaborators, resulting in a rich and focused scientific programme.
Auxiliary heating is provided by NBI and ECRH. An improved acceleration grid for the NBI system reduced power losses in the duct allowing for a 2.5x increase in injected energy with an injected power up to 1.3MW. The legacy ECRH system of 1.4MW from two 83GHz gyrotrons (X2) and 0.9MW from two 118GHz gyrotrons (X3) was enhanced by a 1MW dual frequency (84/126GHZ) gyrotron for X2 or X3 heating. The new gyrotron performs as designed validating the numerical models used for its development.
The most conspicuous upgrade was the installation of removable gas baffles that separate the vessel into main and divertor chambers, Fig. 1. The baffles seek to increase the divertor neutral pressure and thereby facilitate the extrapolation to future devices, such as ITER that will rely upon operation with high divertor neutral pressure [1]. They allow for various divertor and limited configurations. Experimentally, Ohmically heated diverted discharges confirm SOLPS-ITER predictions with up to a 5x increase in divertor neutral pressure. Optional fuelling into the divertor or the main chamber can disentangle the effects of fuelling rate, divertor or main chamber neutral pressure, $p_\mathrm{n,div/main}$, and plasma density, $n_\mathrm{e}$. 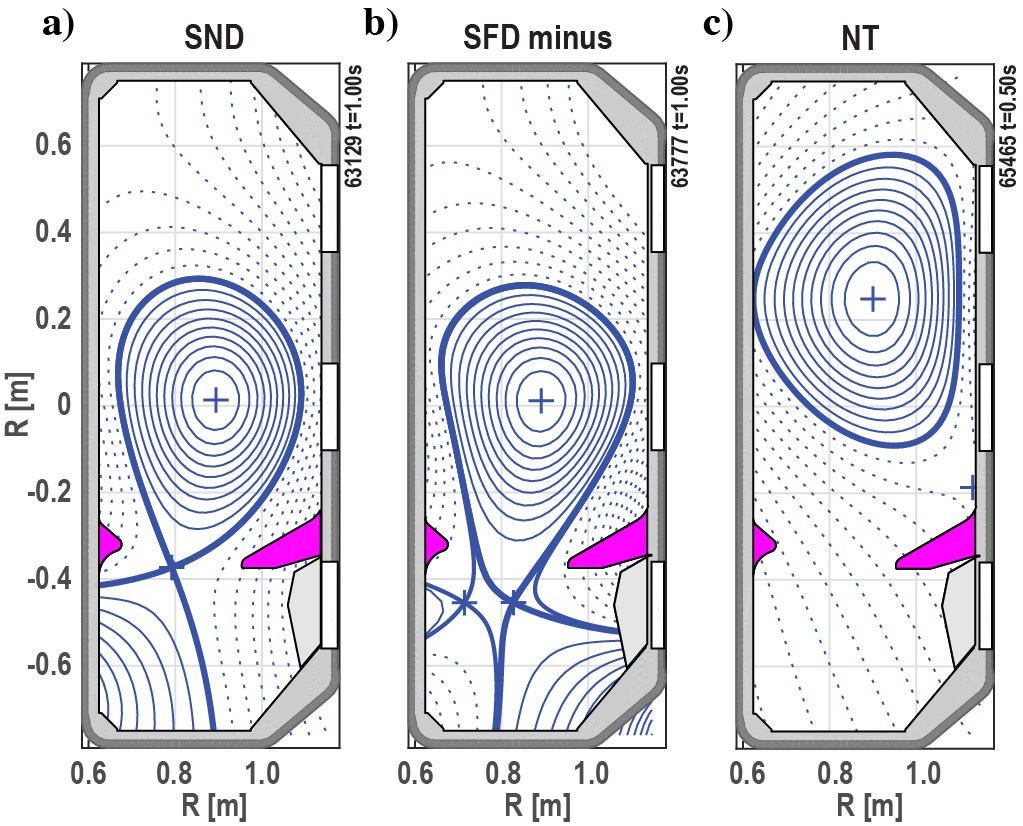 As predicted, increasing $p_\mathrm{n,div}$ in the baffled divertor facilitates access to detachment, which commences at ~30% lower $n_\mathrm{e}$. Scanning the plasma plugging by displacing the X-point with respect to the baffles indicates that the installed divertor closure may be close to optimal. Experiments also provide further evidence that the onset of detachment is determined by $p_\mathrm{n,div}$ rather than $n_\mathrm{e}$. These experiments ultimately seek to validate edge models. Reversing the toroidal field direction reveals changes in the target currents and the formation of a potential well below the X-point in reverse field as predicted by SOLPS-ITER including drifts.
All previously obtained alternative configurations were achieved in the baffled divertor with detailed investigations first focusing on the Super-X divertor [1]. Specific configurations designed to disentangle the effects of a large target radius, $R_\mathrm{t}$, and the angle between the divertor leg and the target surface confirm an expected strong dependence of the detachment onset on the angle, whereas a predicted dependence on $R_\mathrm{t}$ remains elusive.
Two new gas-puff imaging (GPI) systems, diagnosing the X-point region and the outboard midplane, have greatly increased the ability to investigate scrape-off layer (SOL) transport. Characterisation of the SOL turbulence was also extended into H-mode, linking $p_\mathrm{n,div}$ to the formation of the density shoulder [2].
H-mode studies were facilitated by an apparent reduction in the power threshold, $P_\mathrm{LH}$, for the baffled divertor. Here, the inter-ELM target temperatures were lower and nitrogen seeding led to detachment. At the H-mode density limit, a full MARFE develops as a dense strongly radiating region at the X-point that subsequently moves up the HFS edge.
Particular attention was dedicated to the pedestal in type-I ELMy H-modes, where the baffles lead to significantly higher $T_\mathrm{e,ped}$ and, hence, higher $p_\mathrm{e,ped}$, Fig. 2. The pedestal degrades with fuelling that increases $n_\mathrm{e,sep}$, but decreases $T_\mathrm{e,ped}$, consistent with previous findings. The role of $n_\mathrm{e,sep}$ in the pedestal is further highlighted in discharges with a range of $R_\mathrm{t}$ that require different fuelling rates to obtain the same $n_\mathrm{e,sep}$, but then display the same pedestal characteristics, highlighting alternative divertors’ weak effect on pedestal and core properties.

In a continued effort to extrapolate ELMy H-mode performance to the ITER baseline (IBL) scenario, NBI and X3 heated H-modes succeeded in matching the ITER targets of $\kappa$=1.7, $\delta$=0.4, $\beta_\mathrm{N}$=1.8 and $q_{95}$=3.0 whilst retaining good confinement ($H_\mathrm{98y2}$~1) [3]. The Greenwald fraction reached 0.6, but at those densities X2 ECH absorption becomes unreliable and ELM triggered NTMs were only avoided by lowering $I_\mathrm{P}$ with a stationary demonstration at $q_\mathrm{95}$=3.6.
In the quest to ELM-free regimes, negative triangularity (NT), Fig. 1 (c), is confirmed as an attractive scenario with an L-mode confinement matching that of H-modes for positive triangularity. NBI heating extended the operating space of NT plasmas to the IBL value of $\beta_\mathrm{N}$. However, similarly to the low-$q_{95}$ IBL in TCV, these discharges are prone to NTMs, but inaccessible to X2 ECH control. Reciprocating probe plunges past the LCFS of Ohmic NT plasmas confirm a reduced turbulent E×B flux extending from the core into the plasma edge. The measurements are corroborated by measurements from the new mid-plane GPI system.
TCV continues to address critical aspects of the discharge evolution that may limit plasma performance or even pose a danger to components in ITER and future power plants. This includes NTMs, with a successful validation of a new analytical model of the classical island stability, which will facilitate NTM pre-emption in future devices. Enabled by NBI, fast-ion studies are gaining prominence with the development of robust scenarios that display rich, fast-ion driven, MHD spectra and the commissioning of a fast-ion loss detector. Further experiments aim at understanding and controlling runaway electrons (REs) [4], whether created at low density or by mitigated disruptions, as they may cause severe damage in larger devices. Filtered imaging for multiple wavelength ranges provided the first measurements of synchrotron radiation on TCV, Fig. 3, revealing information about location, size and energy distribution of REs and even allowing to detect pre-disruption seed distributions. RE scenarios were extended from Ne and Ar to He, Kr and Xe injection, and to NT and diverted configurations, increasing the space for model validation. In addition, strategies to purge the impurities after the RE beam formation with further $\mathrm{D}_2$ injection are being explored. 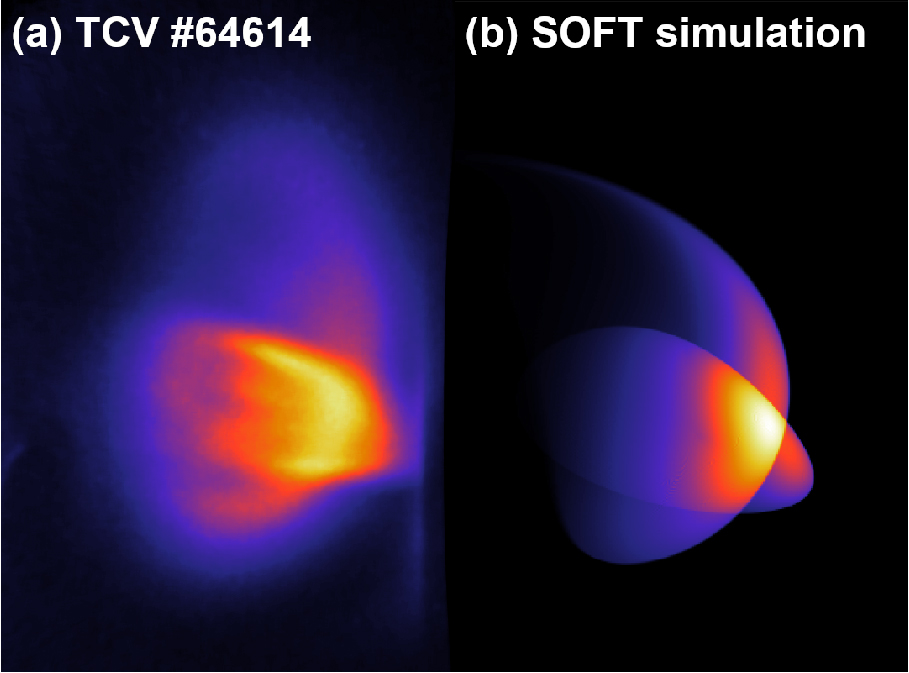 TCV also continues to employ its flexible digital control system to enhance available control solutions [5]. With a view to future long-pulse tokamak discharges, a generic plasma control framework has been developed, implemented and applied to avoid density limit disruptions by controlling the NBI power based upon an estimated proximity to the disruptive boundary. An ability to re-assign EC sources to $\beta_\mathrm{N}$ or NTM control was demonstrated. Plasma exhaust control, for future reactors, was explored using an estimate of the C-III radiation profile along the divertor leg, indicative of the local $T_\mathrm{e}$, with a feedback control of the distance of the radiation from the target to the X-point demonstrated using gas injection as actuator for both L- and H-mode scenarios.
Various short baffled and un-baffled campaigns are planned for 2020 highlighting yet another dimension in TCV’s signature flexibility.