Present activities on the Resonant Antenna Ion Device (RAID) [1] at the Swiss Plasma Center aim at broadening the current knowledge of volume production of negative ions as well as the physics of helicon wave propagation in hydrogen and deuterium plasmas for neutral beam injectors (NBIs) for fusion. In RAID, $H_2$/$D_2$ plasmas are produced and sustained using a steady-state, 10 kW birdcage resonant network at 13.56 MHz with typical electron densities $n_e \approx 10^{18}$ $m^{-3}$ and temperatures $T_e \approx 5$ eV. We demonstrate the existence of an edge plasma region where H-/D- ions are produced by dissociative attachment with significant absolute densities and in volume production mode with a few kW RF power, without using cesium, and at $0.3$ Pa, as required by NBIs to minimize stripping losses. Furthermore, we provide first measurements of the wave-field of the helicon wave, which determines the wave power deposition. Combining the full set of plasma and helicon wave diagnostics with numerical modeling, we approach a level where quantitative comparison between theory and experiments is possible. These results are promising for the application of helicon plasmas as sources of negative ions for future NBIs. 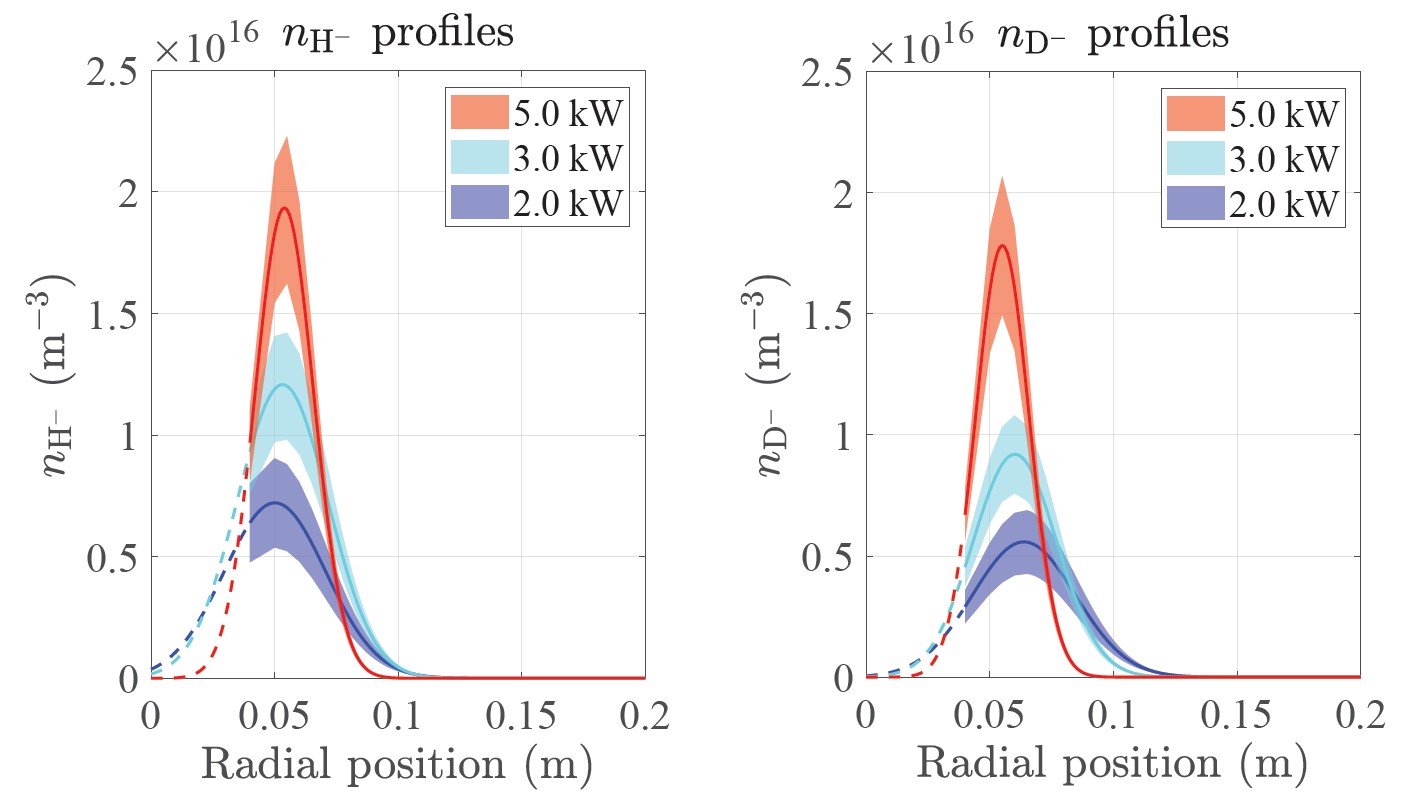 The possibility to use helicon plasma discharges as negative ion sources for fusion NBIs has been suggested in the past since they could have several advantages over traditional inductively-coupled generators: 1) reduced RF power; 2) stable operation at low pressure (< $0.3$ Pa) resulting in low electron stripping losses; 3) higher efficiency of negative ion production in volume production mode, and a high degree of molecular dissociation, which would be favorable in a caesiated source; 4) by producing a magnetized plasma column, they are well-adapted to a blade-shape geometry, such as those required for photo-neutralizer-based NBIs [2]. On RAID, previous experimental campaigns both in hydrogen and deuterium plasmas, using optical emission spectroscopy (OES) data and the collisional radiative code YACORA [3], revealed a significant amount of negative ions with negative ion density in the order of a few $10^{16}$ $m^{-3}$, not far from the negative ion density measured sources for ITER which is $\approx 10^{16}$ $m^{-3}$. In past years, we broadened the investigation of negative ion volume production by combining Cavity Ring Down Spectroscopy (CRDS) and laser photo-detachment to obtain the absolute $H^-$ and $D^-$ radial density profiles [5, 6]. The results are shown in Fig.1, illustrating that negative hydrogen and deuterium ions are distributed in a shell of 6 cm radius with a peak value of $2 \times 10^{16}$ $m^{-3}$ at $5$ kW injected power. These results are interpreted using numerical simulations. We have developed a model describing the transport in RAID hydrogen plasmas, based on the solution of the transport equations of a complete set of plasma hydrogen species in a cold magnetized plasma column, which computes the equilibrium profiles of the different plasma species including hydrogen ions and neutrals. Negative hydrogen radial density profiles show a very good agreement with experimental results, suggesting that this model could be used to extrapolate the source behavior at different regimes and for source optimization. Furthermore, simulations/experiments comparison shed light on the negative ion production mechanism. RAID efficiently produces negative ions in volume operation, i.e. in the absence of caesium, since $H_2$ molecules are vibrationally excited in the hot core, and dissociative attachment production of $H^-$ occurs in the cold periphery without detachment by hot electrons. RAID provides in a natural way the two different electron temperature regions via the radially peaked $T_e$ profile, which are obtained in standard sources for negative ion neutral beams via the use of a magnetic filter field. 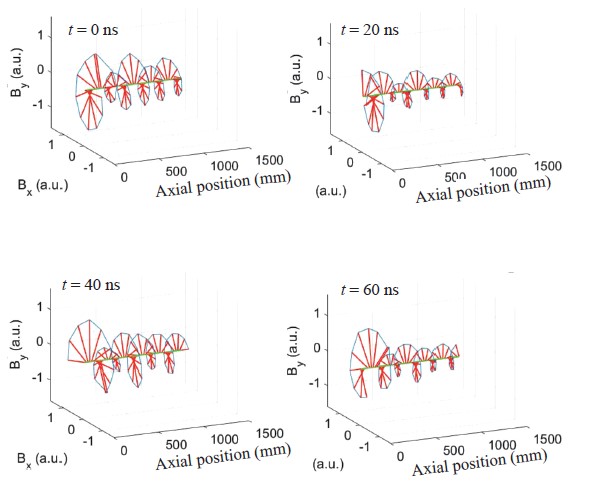 To further advance the understanding of plasma production in helicon sources, we have equipped RAID with a set of three-dimensional magnetic probes, which can reconstruct the magnetic field associated with the helicon wave over the entire plasma volume [7]. By measuring the phase and amplitude of each magnetic field component along the axial direction in a typical RAID plasma column, the structure of the helicon wave is reconstructed. Figure 2 shows the transverse components $B_x$ and $B_y$ along the $z$-axis at four different times during the wave propagation. The time difference between two pictures corresponds approximately to a quarter of a wave period, so the entire sequence represents a full rotation of the helicon wave. These data are used to calculate the wave-number and the phase velocity. We have characterized the helicon wave in several conditions of injected RF power, magnetic fields, gas pressures and boundary conditions with hydrogen/deuterium and argon plasmas. Numerical simulations of the propagation of the helicon wave are performed solving Maxwell’s equations in a dielectric medium that simulates the plasma. We model an existing background plasma by computing, in the cold plasma approximation, the associated dielectric tensor from the experimentally measured electron density mapping in standard condition and $3$ kW power. Good agreement is found between simulations and experiments, strongly supporting the fact that the RAID plasma is mainly sustained by the propagation of helicon waves.
The present work broadens the knowledge of helicon plasma sources by exploring the feasibility to employ helicon plasmas as sources of negative ions for NBIs and provides new insights on helicon wave physics supported by numerical simulations. Leveraging the present results, first negative ion radial extraction experiments will be performed on RAID, where a flexible radial extractor is presently being installed.
[1] I. Furno et al., EPJ Web Conf. 157 (2017) 03014.
[2] A. Simonin et al., New Journal of Physics 18 (2016) 125005.
[3] D. Wunderlich et al., J. Quant. Spectrosc. Radiat. Transfer 110 (2009) 62.
[4] C. Marini et al., Nucl. Fusion 57 (2017) 036024.
[5] R. Agnello et al., Nucl. Fusion 60 (2020) 026007.
[6] R. Agnello et al., Rev. Sci. Instrum. 89 (2018) 103504.
[7] R. Jacquier et al., Fusion Eng. Des. 146 (2019) 1140.