Understanding the dynamics of suprathermal ions in a plasma is of paramount importance in the path to designing a fusion reactor. For example, achieving the burning plasma regime requires an adequate confinement of the suprathermal alpha particles arising from the deuterium-tritium reactions, so that they can become a major contributor to plasma heating.

In TORPEX [1], a basic toroidal plasma physics device located at the Swiss Plasma Center in Lausanne (Switzerland), we study the non-resonant interaction of suprathermal ions with a turbulent plasma by injecting a $30\,\text{eV}$ - $70\,\text{eV}$ $^{6}\text{Li}$ ion beam into a $< 5\,\text{eV}$ hydrogen plasma in a simple magnetized torus (SMT) configuration [2]. The ions travel mostly parallel to the open, helical, magnetic field lines, but drifts and interactions with turbulent plasma structures force the ions to move across them. We place a detector (based on a gridded energy analyzer) at some toroidal distance from the source (Fig. 1), and record the $^{6}\text{Li}$ current at different locations on the poloidal plane. The average value of the current, as a function of poloidal location, gives the 2D probability distribution of suprathermal ions at a given toroidal separation. This separation is linked to the ion propagation time through the known injection energy, so changes of the 2D distributions with toroidal distance are directly related to $^{6}\text{Li}$ ion transport phenomena [3]. 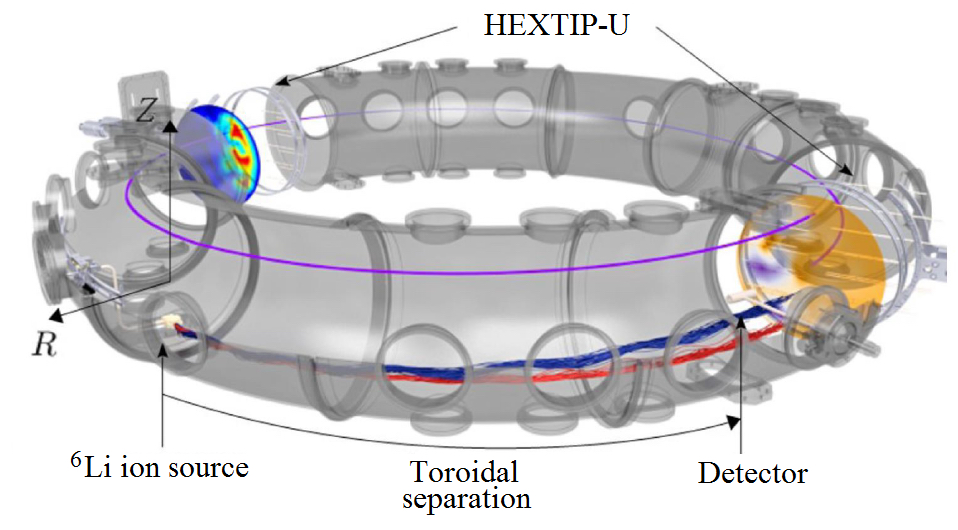 We focus on radial transport, i.e. the transport along the horizontal direction $R$ on the poloidal plane (Fig. 1). By looking at the scaling $\sigma_{R}^2 \sim t^{\nu}$ of the horizontal width $\sigma_{R}$ of the 2D distribution versus the propagation time $t$, different suprathermal ion transport regimes [3, 5] have been identified depending on whether $\nu < 1$ (sub-diffusive transport), $\nu \approx 1$ (quasi-diffusive) or $\nu > 1$ (super-diffusive). The different regimes have been observed for different injection energies and values of $t$ in simulations [3, 6] and confirmed in experiments [5, 6]. Furthermore, an asymmetric fractional Levy motion (AFLM) model was developed and used to describe the evolution in time of the horizontal distribution of $^{6}\text{Li}$ ions [6, 7]. Parameters of the model were fitted to distributions from GBS simulations [8] and a reasonable agreement was obtained in a super-diffusive example.

Recently, we developed an AFLM model including truncation effects (TAFLM) [9] to provide a bound to the step size of the Levy motion. This requirement should better reflect the situation of the real system of $^{6}\text{Li}$ ions. A stringent statistical method was developed and used to fit the model parameters to simulated GBS distributions of the ions. Furthermore, the formalism yields concise algebraic expressions of the moments of the distribution, which allow for comparisons to simulations that better cope with problems from over-parametrization and noise. Although sub-, quasi- and super-diffusive behavior can be recovered, this provides a basis to better identify scenarios that are suitably modeled with TAFLM. A quasi-diffusive example gives very good results and illustrates how this model could be applied to other systems (Fig. 2). 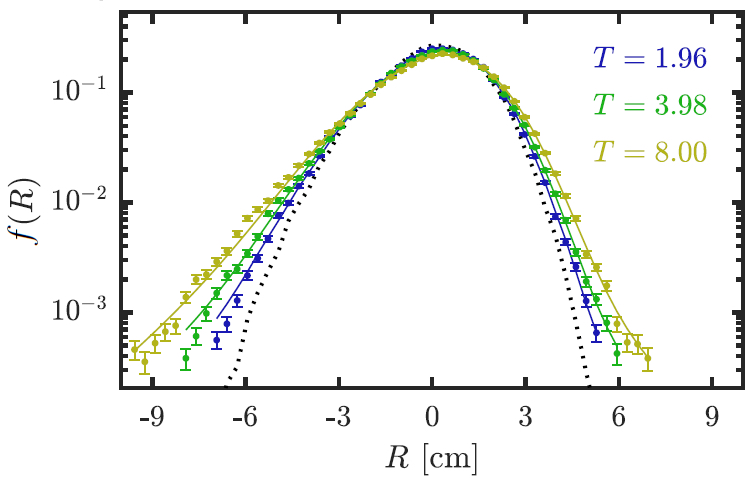 Some cases, most notably in the sub-diffusive regime, have however proven unsuitable to the TAFLM formalism. We have therefore explored a different approach using persistent random walks, where the motion of a particle is affected by instantaneous random changes of the velocity instead of the position (as is the case in typical Levy walks [10]). Using simple Poisson-distributed collisions and well-behaved velocity distributions, we obtain models of transport with time-changing properties [11], a situation that qualitatively resembles the suprathermal ions. Work is in progress to obtain a 2D model of a persistent random walk of a charged particle including the magnetic field, which may find direct application in TORPEX.

While these studies have focused on the $^{6}\text{Li}$ ion distributions obtained with the averages of the detected currents, we have also investigated profiles of higher order moments of the currents [12]. We developed a model based on a meandering beam which sweeps the poloidal plane, and obtained a link between the 2D average profiles and the 2D profiles of the variance and the skewness. Indeed, we have shown that, from knowledge of a very few parameters, one can predict the values of variance and skewness directly from the average profile. This has been verified both with simulations [12] and experiments [13], showing that the time variation of the suprathermal ion currents need not be indicative of ion transport, as it can result from signal variation expected at a single toroidal location, instead of from changes between toroidal positions.