Plasma current ramp-up experiment with 28 GHz second harmonic electron cyclotron (EC) wave has been in progress in the QUEST spherical tokamak. Through oblique injection of the EC wave, the observation presents that (i) the highest level of plasma current $I_{p}$ as non-inductive EC ramp-up is attained with almost zero loop voltage, $V_{loop} \sim$ 0, by long-pulse radio frequency (RF) injection for 1.3 s. Furthermore, (ii) $I_{p}$ reaches 100 kA with $V_{loop}$ < 0.5 V. Relativistic Doppler shift performs the key role to drive plasma current when parallel (to toroidal magnetic field) refractive index of the incident beam $N_{//}$ is large. As a result of the beam steering control and finely adjusted gas fueling, (iii) bulk electrons are heated efficiently and the electron temperature reaches $T_{e}$ > 500 eV at the density $n_{e}$ $\sim$ 1 x 10$^{18}$ m$^{-3}$ with the incident RF power of no more than 150 kW. Obtained results indicate both of high $I_{p}$ and high $n_{e}T_{e}$ can be attained, on condition that dual beams with large and small $N_{//}$ are available, through control of a resonant velocity-region.

High current through non-inductive EC ramp-up has been explored in QUEST whose major and minor radii of the device are $R_{0}$ = 0.68 m and $a_{0}$ = 0.40 m, respectively [1,2]. The world highest EC ramp-up current of $I_{p}$ > 80 kA was achieved solely by RF injection with the power of 230 kW for 1.2 s even without the polarization control [3]. As a next step, a new experiment has been conducted by RF injection with relatively low-power (150 kW) and long-pulse (maximum: 1.6 s) to ramp up $I_{p}$ effciently as $V_{loop}$ $\sim$ 0. The steering antenna can adjust the incident angle to vary $N_{//}$. To examine the effect of local EC heating on the non-inductive current ramp-up, the beam is sharply-focused as the power density reaches 20 MW/m$^{2}$ and its polarization is optimized as extra-ordinary: X-mode.

The symmetry of current drive to co- and counter-directions is broken strongly due to the presence of energetic electrons. It is likely that one of the mechanisms to obtain high $I_{p}$ in QUEST is such symmetry breaking. Figure 2 shows radial dependence of the electron velocity pitch ($v_{//}$ / $v_{\perp}$), satisfying the condition of harmonic resonances (2nd-4th), where $N_{//}$ = 0.75 at $R$ = 0.32 m. $v_{//}$ and $v_{\perp}$ are parallel and perpendicular velocities to magnetic field, respectively. Here, $v_{//}$ is positive/negative when the electron moves in the co/counter toroidal field direction. The current would be generated not only in the co-direction due to the up-shifted resonances but also in the counter direction due to the down-shifted. Increasing the energy of energetic electrons to a typical value $T_{ee}$= 50 keV observed in the experiment, compared to $T_{ee}$= 1 keV, zero crossing points of the curves are shifted inward to the high field side. Owing to large Doppler shift, power of the wave launched from the low field side is absorbed in wide area. As presented in Fig. 2, the area of $n$th upshifted resonance overlaps with that of ($n$ + 1)th down-shifted resonance. The absorption of $n$th harmonic resonance is higher than that of ($n$ + 1)th resonance. Furthermore, around the central post, the strong relativistic effect cuts out the down-shifted 2nd harmonic resonance as presented in Fig. 2. Hence, up-shifted resonance can be superior to down-shifted resonance over wide range in plasma.
The calculation through the ray tracing code TASK/WR presents the RF power is efficiently absorbed mostly into energetic electrons. The single-pass absorption is estimated as 28 $\%$ when $N_{//}$ = 0.75 at $R$ = 0.32 m and the ratio of energetic electrons ($T_{ee}$= 50 keV) is 3 $\%$. About 1/3 of the absorption tends to occur in wide space with the effect of 3rd and 4th resonances due to the relativistic Doppler shift. 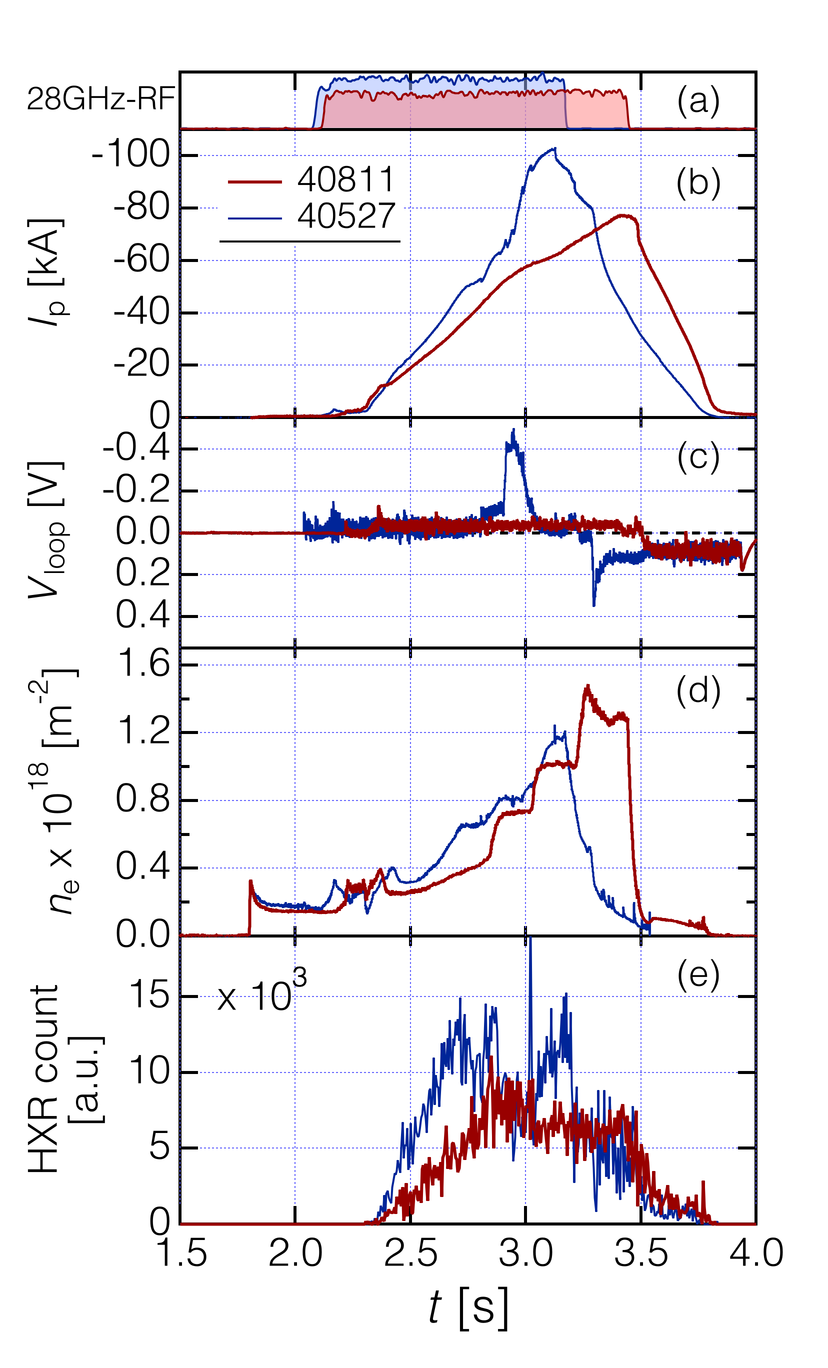 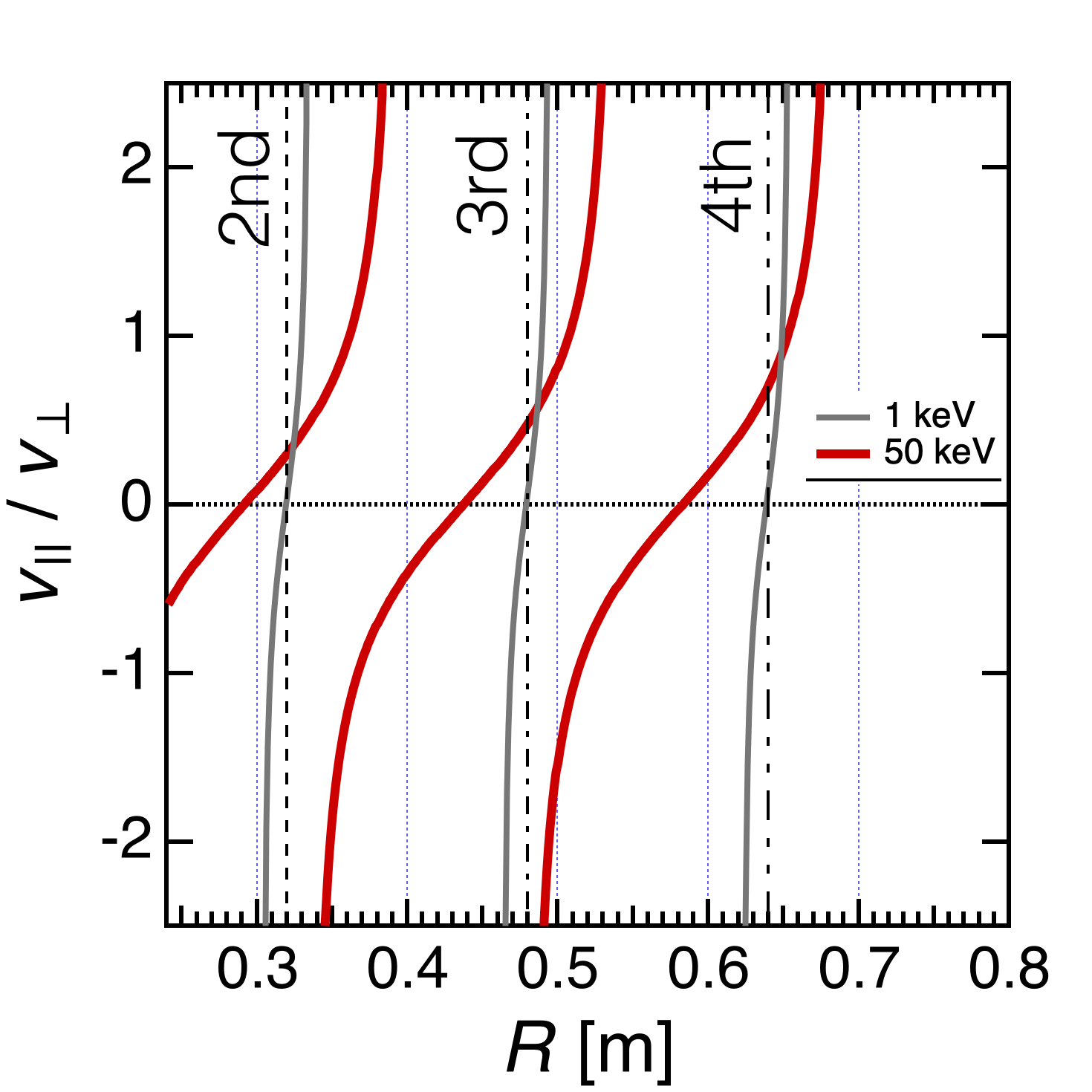 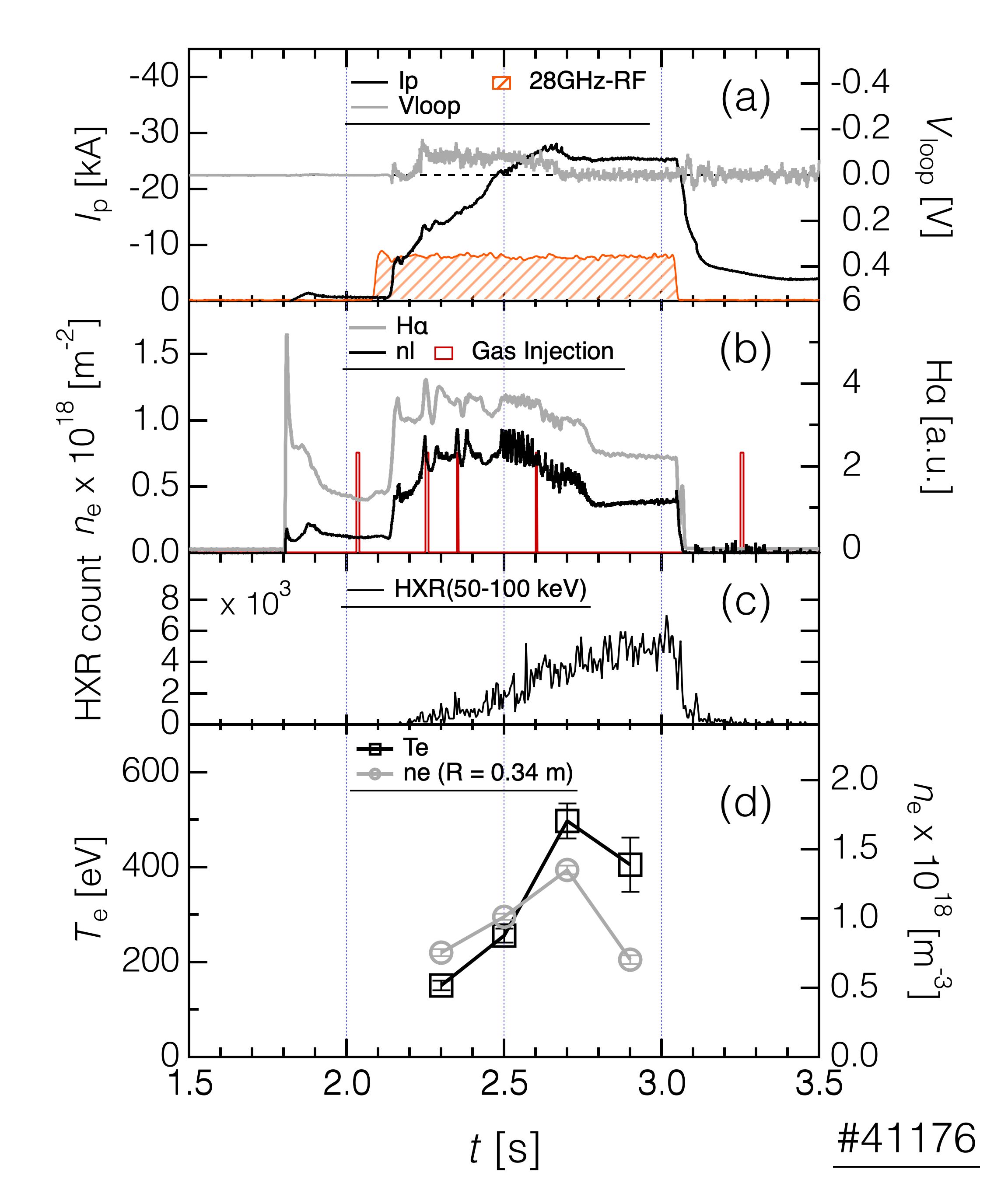