Understanding the effects of neutron irradiation impact on materials is one of the outstanding issues in the development of fusion technologies. The opportunity to learn from material exposure within the Joint European Torus (JET) tokamak environment during deuterium-tritium (D-T) operations and take advantage of the significant 14 MeV neutron fluence to irradiate samples that will be used in the manufacturing of main ITER tokamak components is highly important. The impact of this work derives from the opportunity, for the first time in a tokamak operating with a D-T plasma, to deliver experimental results which inform on the nuclear characteristics of samples of ITER structural materials (and importantly their inherent impurities) exposed to neutrons in this unique environment. The experiments planned for 2020 at JET, notably including a D-T experimental phase, are expected to produce large neutron yields, in the region of 1E21 neutrons. The scientific objectives are linked with a nuclear technology programme, WPJET3, to deliver the maximum scientific and technological return from those operations. The associated experimental data from D-D, T-T and D-T operations will provide new data to develop and improve the radiation transport and activation simulation capabilities via benchmarking and validation studies in fusion tokamak relevant operational conditions. Significant results have been obtained to date with a focus on relevance to ITER device operations 1. The nuclear activities that have been performed include the 14 MeV calibration of neutron yield monitors 2, neutronics benchmark experiments [3-7], nuclear diagnostics and data processing for tritium breeding blankets [8], and activation measurements with supporting analyses for fusion materials [9-11]. 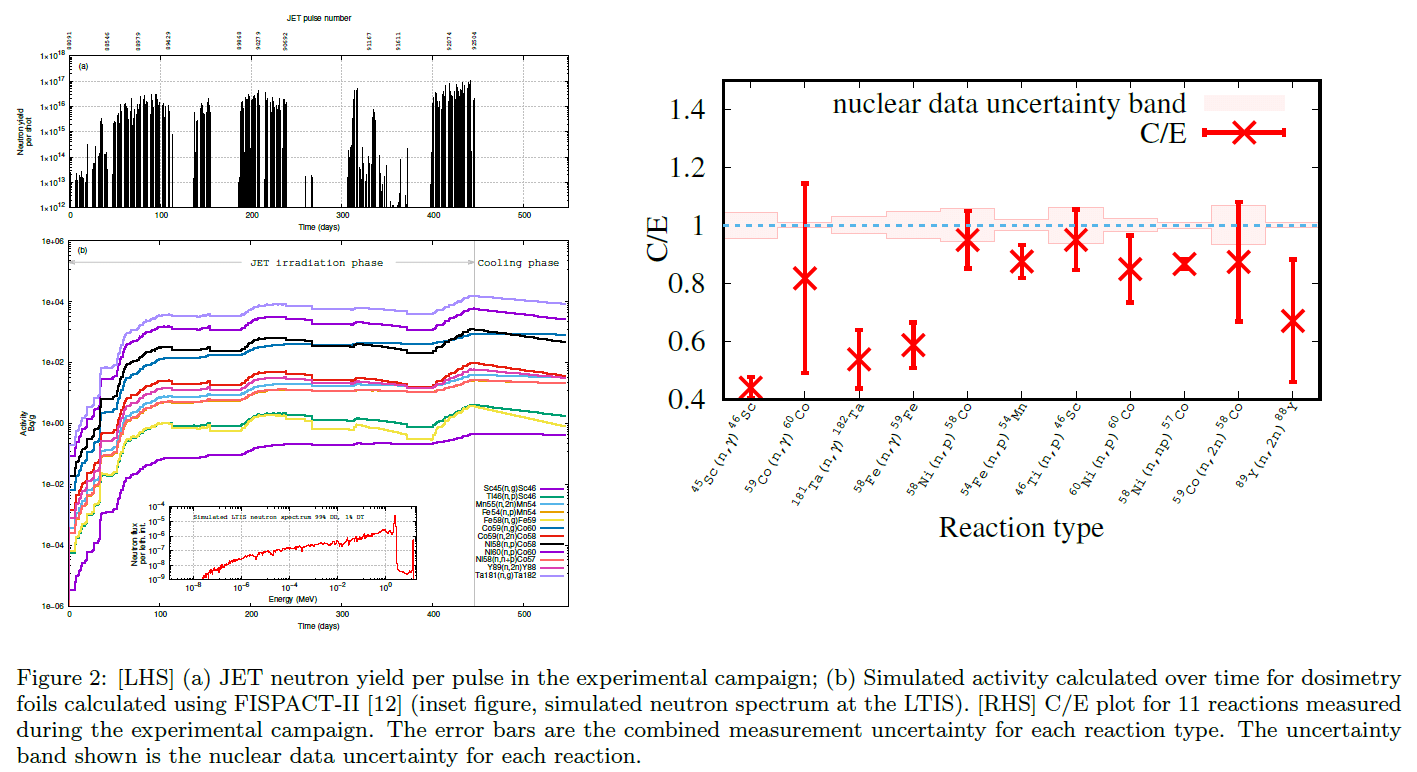 The paper will also discuss our neutron spectrometry methodology and its application to measurements obtained in [11]. Experimental results are compared to the latest simulations using MCNP6 with FISPACT-II performed with fusion-relevant nuclear data libraries. Such capabilities are important and are applied extensively to predict a wide range of nuclear phenomena and impacts associated with components and materials that will be used in ITER operations. One of the routes to impact of this work is therefore directly to the assessment and potential reduction of the safety factors (margins) that are applied to these phenomena, for example radiation dose field assessments, and have direct implications for operations, safety, regulation as well as cost.

Full details of the experiments which supported characterisation of the LTIS assemblies that were used in the C36 JET D-D campaign are detailed in [11]. Dosimetry foils were irradiated in the LTIS in JET octants 4 and 8 for the duration of the campaign. Post-irradiation, the foils were distributed to four EU laboratories for analyses. Figure 2(a) shows the JET neutron yield per pulse over the duration of the C36 campaign. The foils were irradiated during the JET D--D C36 campaign which ran over a period of 446 days. During this period, a total yield of 2.26E19 neutrons was delivered in 3682 experimental JET shots. Figure 2(b) shows the simulated activity prediction obtained from activation calculations. The inset neutron spectrum exhibits the two characteristic neutron energy peaks from the D-D and D-T fusion reactions.

Our analyses, following the measurements detailed in [11] shows that the models and simulation approach that was taken is broadly satisfactory for most of the threshold dosimetry reactions that were studied with an average C/E (calculated over experimental ratio result) of 0.91 +- 0.1. However, two groups of reactions yielded low C/E (see the four left-most points in the RHS plot in figure 2), suggesting that parts of the calculated LTIS neutron spectrum, and the associated neutronics model, should be modified and improved, and we will discuss our conclusions in detail in the full paper. A set of four capture reactions all exhibited low C/E values suggesting that the thermal neutron flux is under-predicted in the calculated results.
Additionally, we find that assumptions relating to the high energy part of the spectrum around 14 MeV can be improved: The Y-89(n,2n)Y-88 reaction (see an associated gamma spectrum measurement in figure 3) - a high energy threshold sensitive to neutron energies produced in D-T reactions, but not to neutron energies produced via D--D reactions - also exhibited a low weighted average C/E value (see the right-most point in the RHS plot in figure 2).

Besides presenting the latest experimental results from ITER materials activation experiments, plans to experimentally study radiation-induced defects (density and size distribution) generated in some additional irradiated samples (W, Mo and Fe) are also discussed; these will be measured by the Positron-Annihilation Lifetime Spectroscopy (PALS) technique. The PALS data obtained following irradiation in the JET D-T campaign will be compared to data obtained from high energy proton and neutron-irradiation with different spectra in order to improve simulation approaches for fusion neutron-induced damage in materials.