Edge localised mode (ELM) instabilities are a concern for future tokamak operations due to the predicted high heat loads and excessive erosion to the first wall/divertor [1]. A solution to address this focuses on divertor design; the ‘Super-X’ magnetic configuration is designed to alleviate high heat loads and will be tested on MAST-U [2]. Plasma detachment has been predicted in the MAST-U Super-X for L-mode [3] and H-mode [4] plasmas but behaviour during ELMy H-mode is unknown. The work presented here uses simulations to address this by investigating the extent of ELM burn-through and recovery times. Questions of ELM burn-through can only be answered with confidence when MAST-U starts operation, but until then simulations can provide useful guidance. The simulations are first of a kind and are numerically and computationally very challenging.

Simulations are performed using the nonlinear MHD code JOREK [5]. In JOREK the reduced MHD two temperature model has been merged with the neutrals model [6] and developed for divertor recycling due to the increased plasma-neutral interactions in the Super-X. The neutral fluid is described diffusively, the plasma flux incident on the tokamak wall/ divertor targets is reflected away as neutrals, which diffuse into the domain and become ionised at higher temperatures. The flux of plasma at the divertor targets increases target neutral density and an ionization front is established.

This simple model includes only deuterium atoms, the ionization and recombination processes along with radiative processes with energy losses through line and bremsstrahlung radiation. Despite the exclusion of detailed atomic processes like charge exchange, molecular dissociation and impurities required for advanced detachment studies, simulations appear to produce an ionisation front detached from the target, which is sufficient as an initial condition for preliminary studies of ELM burn-through.

It is first important to demonstrate detachment, or to at least obtain a high neutral density in the divertor so an upstream density scan has been performed for a MAST-U Super-X case. As the upstream density is increased (Fig. 1a) the target electron temperature reduces to a few eV, when the target electron Fig. 1a) Target density flux and electron temperature temperature decreases below 5 eV a roll-over in the target density as a function of upstream density, comparison of flux is also observed. The JOREK roll-over is significantly JOREK to SOLPS. b) Ionization in the lower divertor as a function of upstream density, shallower in a comparison to SOLPS for the same Super-X corresponding to each point in a). scenario. Fig. 1b) shows the ionization front, which moves upstream, as the roll-over occurs. A roll-over has been demonstrated for the Super-X case with expanded flux in the divertor, shown here, and for a case without expanded flux, which is used for the ELM burn-through simulations. 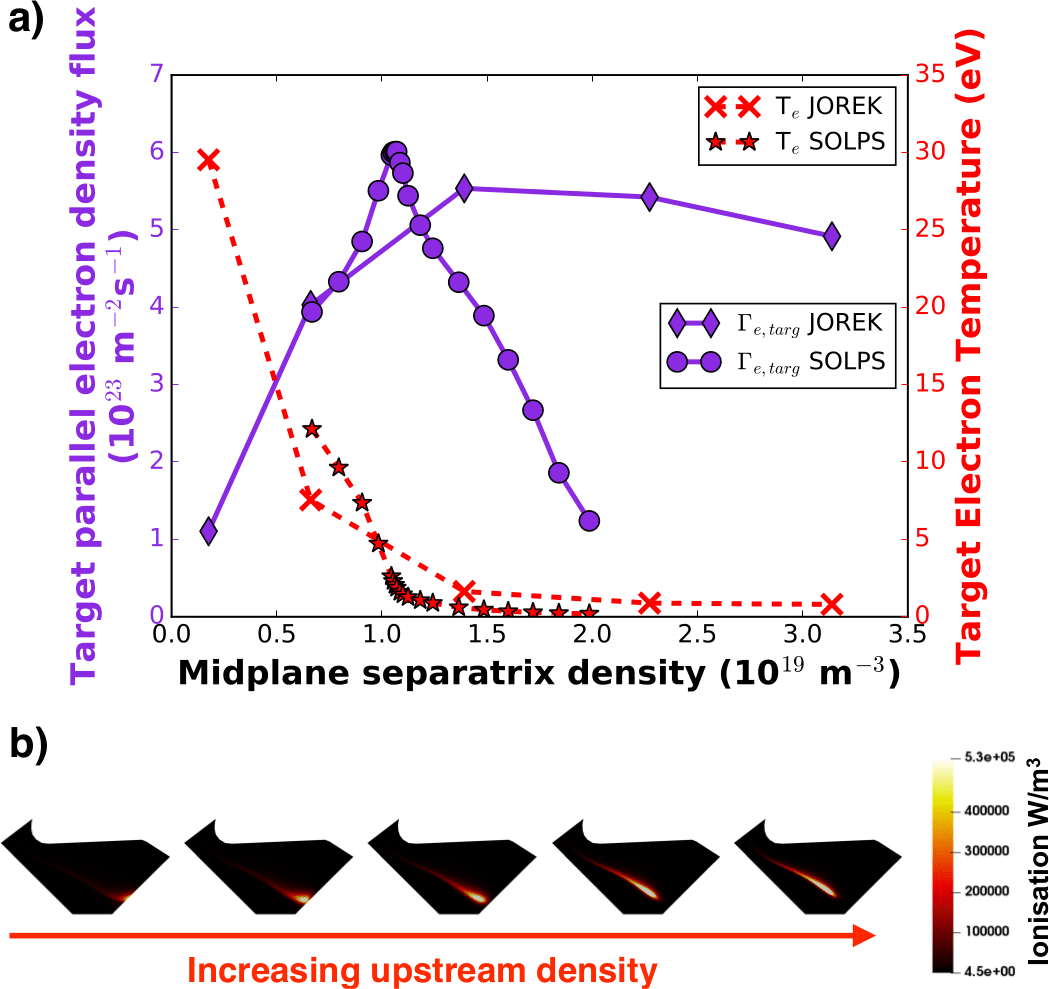 The ELM burn-through simulations are initiated from a divertor configuration after the roll-over where single or multiple toroidal mode numbers are included in each simulation. The energy of the modes grows as the equilibrium is unstable to peeling-ballooning modes and an ELM crash is observed. In each simulation the ELM crash results in plasma burn-through in the Super-X and the divertor plasma re-attaches. A peak heat flux of 9.8 MW/m2 to the lower outer divertor is observed for a multiple mode number simulation (n=2,4,6,...,20), shown in Fig. 2a), along with the evolution of various peak outer target values. The peak heat flux to the inner target is 2.2 MW/m2. The filaments that erupt from the plasma edge are observed; the plot of the plasma density in the poloidal plane is shown in Fig. 2b). This is a snapshot of the plasma density when the MHD activity is highest, here n=10 is dominant. When the energy of n=10 has reduced, the thermal energy and particle losses in the pedestal from ψ = 0.9 to ψ = 1.0 are 22% and 20% respectively.

In the divertor and around the x-point regions; lobe structures are observed. These structures are seen even more clearly in the electron temperature (Fig. 2c)). The whole region around the strike point is ergodised, with field lines connecting the pedestal top to the target (Fig. 2d)). A few milliseconds after the ELM crash the divertor heat fluxes and temperatures recover to pre-ELM conditions and the plasma appears to detach again, shown in Fig. 2a) and the ionization evolution in the outer divertors (Fig. 2e)). The recovery times are shorter than the inter-ELM phase, typically 10’s milliseconds for previous MAST experiments. A divertor pumping scan has been performed after the ELM crash. A phase where the ionisation front detaches from the target occurs, after the crash, for all but the highest pumping amplitudes due to the increase in density from the ELM. A pumping threshold is then observed at which the plasma re-attaches for high pumping and at low or no pumping the divertor ionisation front appears to remain detached. The pumping threshold observed is consistent with the pumping threshold before the ELM crash. 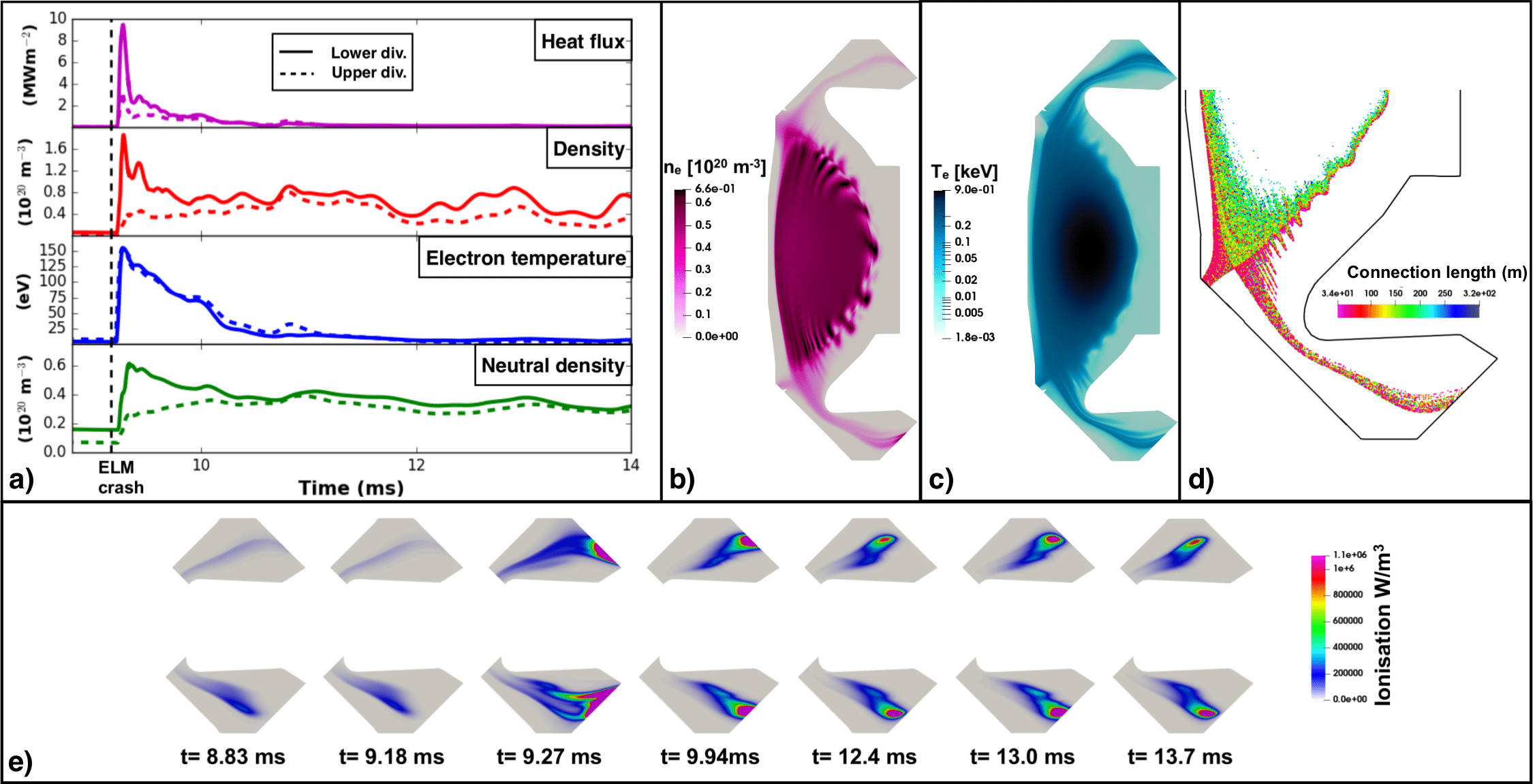 Different divertor configurations are used for ELM simulations with the single temperature reduced MHD model without neutrals. The ELM simulations show that moving from a conventional case to the Super-X case reduces the peak heat fluxes by an order of magnitude from 8 MW/m2 to 0.8 MW/m2. This can be understood by considering the area the heat flux is incident on in both cases - approximately 0.14 m2 in the conventional case to 1.5 m2 in the Super-X case; even though the peak heat fluxes are in general smaller than expected, in both cases, the comparison between divertor configurations appears to be reasonable.