A first attempt to observe a nuclear-elastic-scattering (NES) effect caused by energetic protons on deuteron slowing-down behavior was conducted on the Large Helical Device (LHD). We confirmed experimentally that the energetic ion slowing-down behavior in a fusion plasma is influenced by the NES. A neutron decay time of DD neutrons after turning off the deuterium beam (that was injected into a deuterium plasma) was observed and compared between when an intense hydrogen beam was injected and not injected. (1) Experimental observations showed that slowing down of the energetic deuterons was delayed by the hydrogen beam injection. (2) Numerical simulations based on the Boltzmann-Fokker-Planck (BFP) model (in which the NES process was considered) explained the experimental results with adequate parameters.

Although the cross section of NES is relatively small compared with the Coulomb one, NES is a large-angle scattering process, thus a large fraction of fast-ion energy is transferred in a single scattering event. (a) Energetic ions knock the thermal ions in the higher energy range and create knock-on tails in ion velocity distribution functions via NES. On the same time, NES (b) delays or accelerates the slowing-down process, (c) reduce the fast-ion loss, (d) influences on the fusion reactivities and fusion-product emission spectra. (e) NES also enhances transferred power ratio from fast ions to bulk ions. NES always occurs in usual plasma operations and experiments, and it can introduce an additional energy-transfer channel between ions, in some cases, bringing this process into competition with the Coulombic scattering process. These phenomena are predicted by simulations; however, experimental validation has not been made.

On the LHD, we attempted to observe the NES effect by looking at the neutron decay time of the DD neutrons after deuterium beam was terminated. An intense hydrogen beam was injected into a deuterium plasma to create a knock-on tail in deuteron velocity distribution function, and to observe the effect on the deuteron slowing-down behavior. In the experiment, two types of hydrogen (H) beams (a) NBI#1 and 3, and (b) NBI#2, and deuterium (D) beam (NBI#4 and 5) injectors were prepared. NBI#1, 2, and 3 are injectors that are directed tangentially toward the axis of the toroidal magnetic field, with the negative-ion sources at 180 keV. NBI#4 and 5 are perpendicular to the magnetic axis, with energies of 60--80 keV. During the experiment, deuterium plasma is prepared by conducting electron cyclotron resonance heating and neutral-beam (deuterium NBI#4 and 5) heating. After 4.01 s from initiating the plasma discharge, deuterium beam injections (NBI#4 and 5) were terminated. We focused our attention on the decay processes of neutrons produced by the D(d,n)${^3{\rm He}}$ reactions with the deuterium beams (NBI#4 and 5) and bulk deuterons after 4.01 s. In Fig. 1, the time variations of the neutron generation rates with and without additional H-beam heating (NBI#1) are plotted. Without H-beam heating, the plasma density (temperature) was approximately 30 (20) % lower (higher) compared with the beam-injected case. Contrary to the plasma condition, the neutron decay time becomes larger when H beam is injected.

Time variation of the deuteron distribution functions after deuterium beam was terminated when H beam is (a) injected and (b) not injected are simulated by BFP equation (see Fig. 2). We assumed uniform plasma in the simulations. When H beam is injected, knock-on tail appears and it delays the neutron decay time. For 18 shots in the experiment, the neutron decay times $\tau_{\rm n}$ (defined as the time which the neutron generation rate falls to $1/e$ after NBI#4 and 5 are terminated) are plotted as a function of the neutron decay time by FP simulation $\tau_{\rm FP}$. The results are presented in Fig. 3 and compared with the simulations based on the BFP model. In the simulations the beam injection energy and power are chosen as 180 (60) keV and 6 (4) MW for hydrogen (deuterium) beam. The confinement times for protons and deuterons are taken from previous research for LHD as 500 and 30 ms respectively. The squares represent the experimental results with (red) and without (black) H beams (NBI#1, 2, or 3), whereas the circles represent the BFP simulations with (red) and without (black) H beams. The green circles represent the simulation when we only consider the Coulomb scattering process (on the diagonal line). The result indicates that the H beam adds energy to the slowing-down component via another process in addition to the Coulomb scattering, so that the decay process of the neutrons is further delayed. H-beam powers for the 5 shots within a large dotted circle (counter injection to the toroidal magnetic field) were 20--30% smaller and the confinemnts were deteriorated compared with the other upper 7 red squares (co injection to the toroidal magnetic field); thus, the $\tau_{\rm n}$ for the lower 5 shots would approach white squares of w/o beam.

To ensure the confirmation, we also continue to observe the NES effect from other viewpoints, i.e. (a) difference in neutron attenuation features when knock-on tail is created and not created [A], (b) influence of beam-power on the neutron decay time, (c) difference in power flow from beam to fast deuterons via Coulomb and NES by BFP simulation, etc. For this purpose, experiments to measure 0.478 MeV $\gamma$-rays from d-${^6{\rm Li}}$ nuclear reactions and 468 nm (3p-4s) visible light emission spectrum from ${^3{\rm He}}$ are now conducting. The NES effects would become further significant as ion energy increases. In DEMO reactor, beam-injection energy becomes much larger, and energetic ions are also produced by fusion reactions. In this case, for example, the transferred power ratio from fast ions to bulk ions may increase almost 10%, and which may influence on an ignition condition and output power control. To ensure the future reactor development, it is important to observe and validate these phenomena using the relevant numerical models. 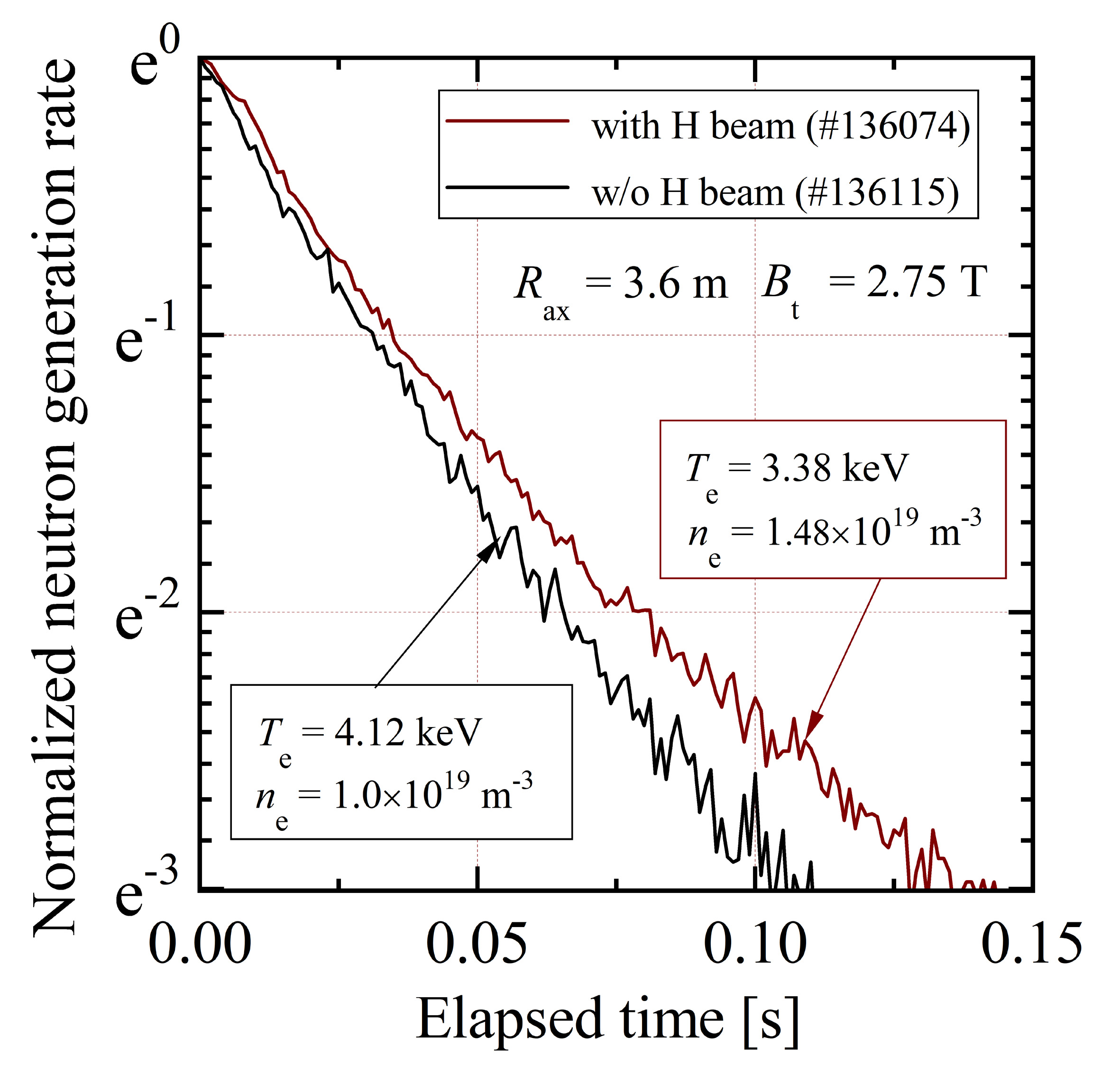 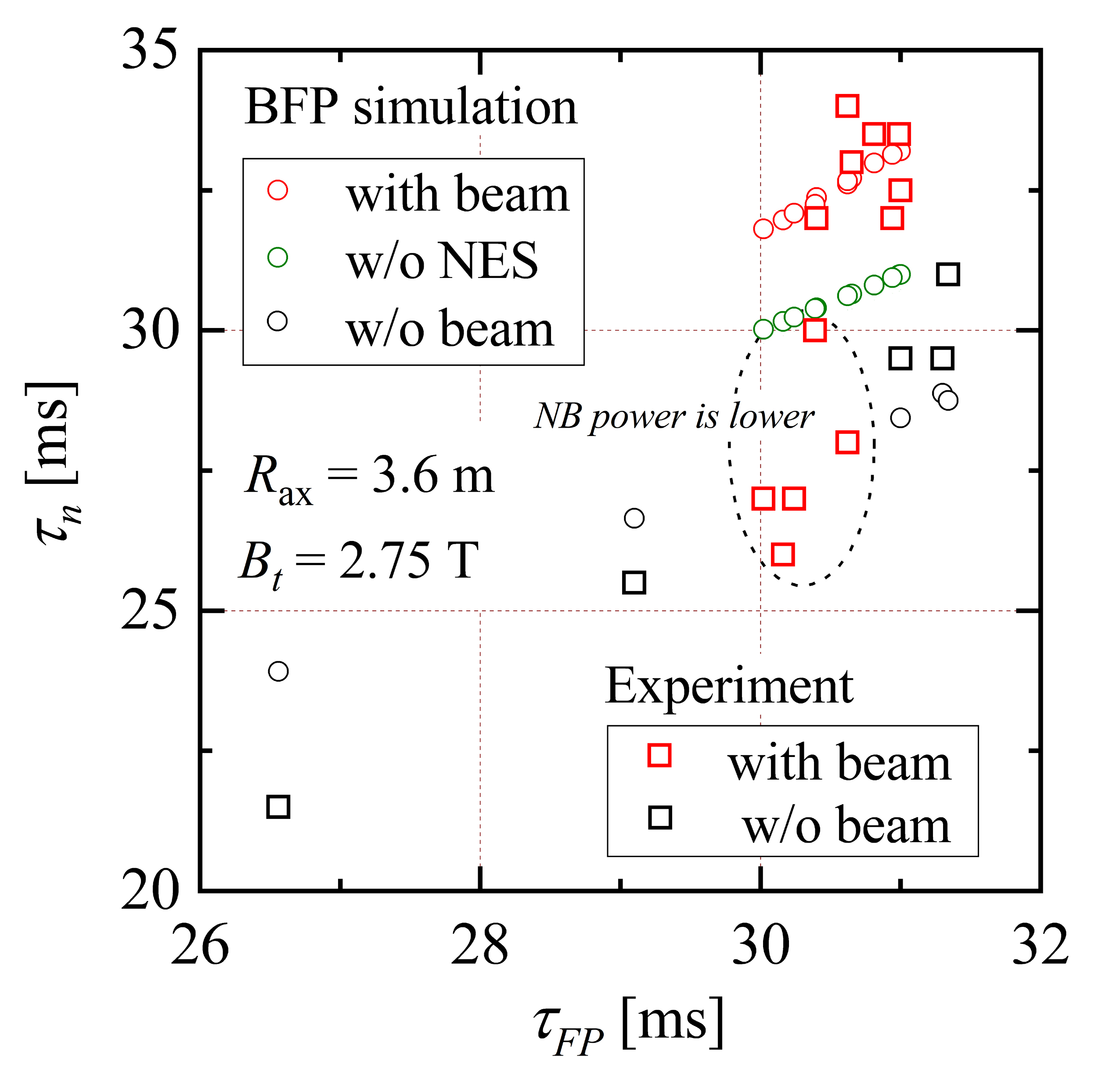