Pre-ionization method using non-resonant 2.45 GHz microwave heating ($P_\mathrm{2.45GHz}$ < 20 kW) enables us to achieve NBI plasma start-up in helical systems for the first time even in low NB power ($P_\mathrm{NB}$) and without resonance heating conditions. Three physical phenomena are essential to achieving the start-up: (1) high-energy electrons are formed by the non-resonant heating, which is considered to be accelerated by stochastic interaction with the electric field of the microwave, (2) the seed plasma with the density in the order of $10^{17}-10^{18} \ \ \mathrm{m}^{-3}$ is produce by the high-energy electrons colliding with neutral gas and (3) the seed plasma has an effect to produce the beam ions sufficiently in the early phase of NBI, which contributes to heat electrons rapidly to exceed radiation barrier. The start-up method developed in this study is useful to realize the plasma start-up in Heliotron/Stellarator devices under low absorbed NB power conditions.

For advanced Heliotron configurations, development in operation scenario for high-beta plasma formation is indispensable to study the beta-effect on the transport. The NBI plasma start-up scenario has been developed in LHD and W7-AS. However, the start-up has been difficult in LHD under the condition of $B$ < 1 T when the deuterium NB has been used. In W7-X, due to the short NB path-length ($\sim$ 0.5 m), the numerical calculation predicted that the assist of the pre-ionization was required to achieve the start-up. Since the formation of the high-beta plasma requires the NBI discharge at low $B$, the pre-ionization by non-resonant wave heating is useful to develop high-beta operation scenario. This study clarifies physical mechanism to achieve the NBI plasma start-up using the non-resonant heating in Heliotron J ($R/a$ = 1.2/0.17 m)[A].

Figure 1(a) shows the time evolution of the plasma parameters obtained in the NBI (24 kV, 1 MW) plasma start-up discharge assisted by the pre-ionization using the 2.45 GHz microwave ($P_\mathrm{2.45GHz}$ $\sim$ 5 kW). Neither fundamental nor higher-harmonic ECR layers existed for the microwaves in the confining region ($B$ = 0.8 T). During the pre-ionization phase, the radiometer ($f \sim$ 70 GHz) intensity ($I_\mathrm{rad}$) and the line-averaged electron density $\overline{n}_\mathrm{e}$ in the order of $10^{16}-10^{18} \ \ \mathrm{m}^{-3}$ were observed. Synchrotron radiation is the main component of $I_\mathrm{rad}$, since the optical thickness of the 70 GHz microwave is calculated to be approximately $3 \times 10^{-3}$ under the low-density seed-plasma condition. The comparison of the $I_\mathrm{rad}$ spectrum to the synchrotron radiation model indicates existence of MeV electrons. A toroidal electric field ($E_\mathrm{Tr}$) was 0.2 V/m at the maximum within a duration of 0.1s. The effect of $E_\mathrm{Tr}$ on the seed-plasma generation is considered to be limited. In fact, in reference [A] we have confirmed the formation of the pre-ionized plasma and the successful NBI start-up in the case that the 2.45 GHz microwave was launched after current ramp-up of a vertical (AV) coil. From the CIII and OV line emission intensities ($I_\mathrm{CIII}$ and $I_\mathrm{OV}$), the electrons with energies exceeding the CII ionization potential ($\sim$ 30 eV) were produced in the seed-plasmas during the pre-ionization phase, but the number of the electrons exceeding that of OIV ($\sim$ 80 eV) was small. After NB turned-on, increase in $\overline{n}_\mathrm{e}$ and $I_\mathrm{CIII}$ was followed by increase in $I_\mathrm{OV}$ and the stored energy $W_\mathrm{DIA}$, indicating the plasmas were heated rapidly exceeding the radiation barrier for the low-Z impurities. The time evolution of photodetector (AXUV) intensity which observes the radiation from UV to SX range at the different radial position shows the plasma is expanded within 20 ms after NBI. After that, additional gas fueling can increase $\overline{n}_\mathrm{e}$ more than $2 \times 10^{19} \ \ \mathrm{m}^\mathrm{-3}$.

The X-ray Bremsstrahlung radiation measured with scintillator clarifies that the co-going electrons have higher energy (> 2 MeV) component than the counter (ctr) them (Fig. 1(b)). A stochastic acceleration mechanism is one candidate to explain the production of the relativistic electrons by the non-resonant heating. The electron energy distribution $f_\mathrm{e}(E)$ was simulated under the realistic Heliotron J configuration (3-D) with taking the effects of (1) the acceleration by the electric field of the microwave ($4 \times 10^5$ V/m at maximum) and (2) the relativistic effect to the electron orbit into account. In contrast to the Tokamak start-up, since the magnetic configuration is formed by the external coils, the relativistic electrons having large drift orbit are well confined. In other words, the acceleration mechanism of the non-resonant heating can be investigated without consideration of boundary effects of open magnetic field lines existing in Tokamak. The consistency between the simulation of $f_\mathrm{e}(E)$ and the measured X-ray spectra, especially in the difference in the co/ctr directions, supports the production mechanism of the relativistic electrons by the stochastic acceleration.

The seed-plasma density roughly increases with $I_\mathrm{rad}$ which depends on $P_\mathrm{2.45GHz}$ and $B$ (Fig. 1(c)), indicating the production and the confinement of the relativistic electrons affect the seed-plasma generation. Because the additional gas puffing during the pre-ionization phase increases the seed-plasma density, the seed plasmas are considered to be generated by collisions between the high-energy electron and the neutral gas. A density threshold ($\sim$$5 \times 10^{17} \ \ \mathrm{m}^\mathrm{-3}$) was observed for the successful start-up under the condition of $P_\mathrm{NB}$ $\sim$ 1 MW. We made another (0-D) model for the NBI start-up analysis and obtained a consistent density threshold (Fig. 1(d)). The model analysis clarifies that the seed plasmas have an effect to increase the beam ion density ($n^{+}_\mathrm{beam}$) sufficiently in the early phase of NBI, which contributes (1) to heat electrons and (2) to promote the ionization/dissociation of neutral gas ($n_\mathrm{D2}$). (3) A positive feedback loop of the processes increases the electron temperature ($T_\mathrm{e}$) to exceed the radiation barrier. If the initial density is lower than the threshold, the model analysis predicts that $n^{+}_\mathrm{beam}$ is not enough to heat electrons and finally the start-up fails. In the case under the seed-plasma density more than $\overline{n}_\mathrm{e}$ = $4 \times 10^{18} \ \ \mathrm{m}^\mathrm{-3}$ at $P_\mathrm{2.45GHz}$ = 10 kW, a rapid NBI start-up was succeeded even in the low $P_\mathrm{NB}$ ($\sim$ 0.3 MW) condition.
Ref: [A] S. Kobayashi, et al., Nucl. Fusion 50 62002 (2011). 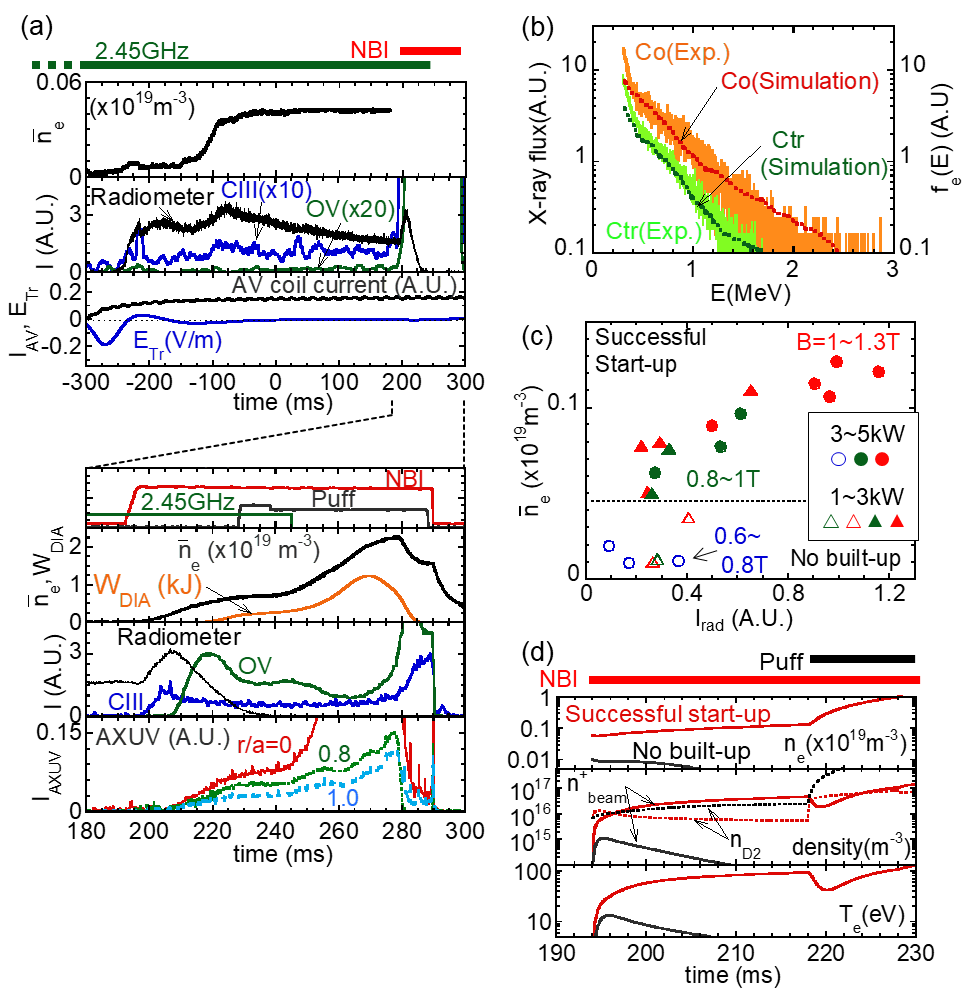