In stellarator-heliotron plasma, radiation collapse is one of the most critical issues that limit performance of plasmas, while stable high-density operation is an advantage of a helical system over a tokamak. The Sudo scaling $n_\mathrm{e}^{\mathrm{Sudo}}=0.25\left(PB/a^{2}R\right)^{0.5}$[1] is well known as the scaling law of density limit, which suggests that the balance between heating power and radiated power loss is a key together with robust confinement capability such as plasma volume and magnetic field[2]. However, while other operational conditions such as wall condition and impurity concentration are thought to be related to radiation collapse, those conditions remain tacit knowledge and those effects are hidden behind the Sudo scaling.

In the present research, the support vector machine has been used to construct the classifier that distinguishes plasmas in the state where the radiation collapse is likely to occur and in the stable state. The dataset is based on experiment data using deuterium gas-puff plasma in LHD. The magnetic configuration is fixed at the magnetic axis position $R_\mathrm{ax}$ of $3.6\, \mathrm{m}$ with $B= 2.75\,\mathrm{T}$. The surveyed line averaged density and heating power range up to $1.1\times10^{20}\,\mathrm{m^{-3}}$ and $15\,\mathrm{MW}$, respectively. The experiment data was labeled according to density exponent $x=(\dot{P}_\mathrm{rad}/P_\mathrm{rad})/(\dot{\bar{n}}_\mathrm{e}/\bar{n}_\mathrm{e})$, which is a criterion derived from the relationship between radiation power and plasma density[3]. Using the constructed classifier, plasma parameters that are related to radiation collapse have been extracted using Exhaustive Search (ES)[4]. The ES is one of the sparse modeling methods that automatically extract features hidden in high-dimensional data.
The dataset consists of 16 candidate parameters such as $\bar{n}_\mathrm{e}$, $P_\mathrm{in}$, $P_\mathrm{rad}$, $\beta$, impurity line emission intensities, and electron temperature at plasma center $T_\mathrm{e,center}$. $T_\mathrm{e,center}$ is used as typical electron temperature in the present study.
The boundary between the state of plasma where the radiation collapse is likely to occur and the stable state is expressed with the plasma parameters extracted by the ES as

Note that $\mathrm{C}$ is a normalization factor and the intensities of OVI and FeXVI were normalized by $\bar{n}_\mathrm{e}$. $\bar{n}_\mathrm{e}$ and $T_\mathrm{e,center}$ are used in $10^{19} m^{-3}$ and $keV$, respectively. Then the likelihood of the radiation collapse has been evaluated by corresponding the distance from the boundary to the fitting of the frequency of the occurrence by sigmoid function. The likelihood was compared with Sudo scaling in Fig.1. In Fig. 1, the data in the stable state and the state of plasma undergoing the radiation collapse were plotted by dots and crosses, respectively. The distributions of those two states are overlapping in Sudo scaling but separated better in likelihood. By fixing threshold likelihood, eq.1 can be deformed into the density limit expression, e.g., $\bar{n}_\mathrm{e}^{50\%}=0.014\mathrm{OVI}^{-1.6}\mathrm{FeXVI}^{-0.54}T_\mathrm{e,center}^{3.0}$ for 50% likelihood. This is a practical density limit for the control of LHD plasma in the high density regime. 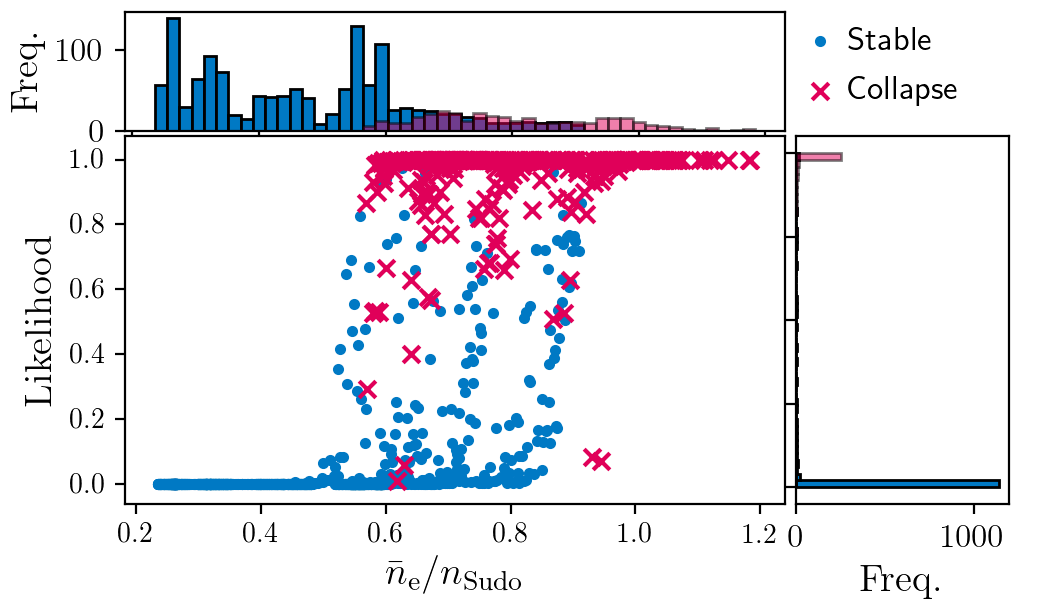 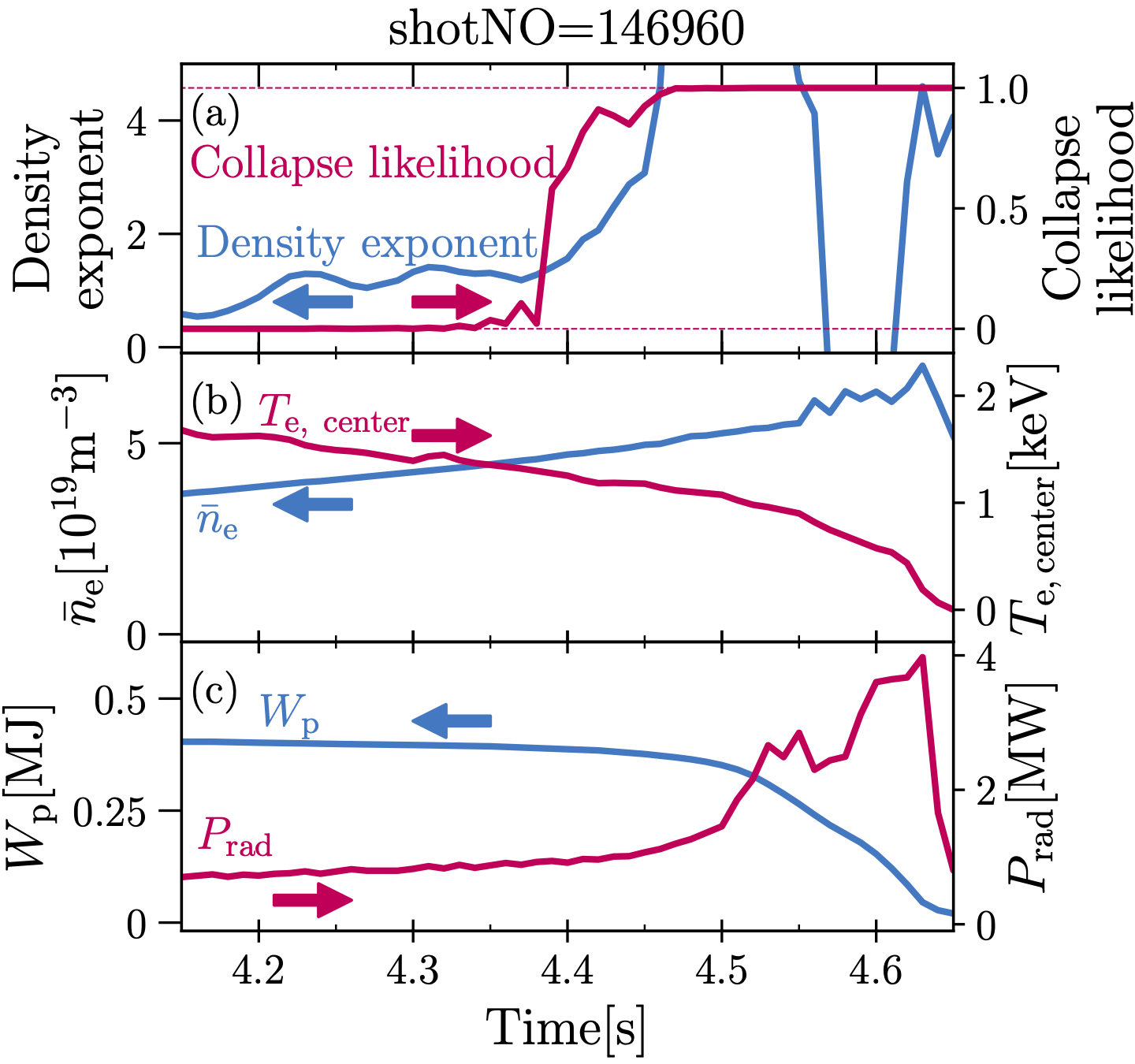 According to equation 1, it was seen that the $T_\mathrm{e,center}^{-3.9}$ is an index defining the boundary between the state of plasma where the radiation collapse is likely to occur and the stable state. Here, it is known that the radiation power due to impurities is a source of radiation loss from the plasma and it depends on impurity amount and cooling rate $L_z$ of impurity ion species[2]. The cooling rate is a function of electron temperature and the dependency differs by species. Figure 3 shows that the cooling rate of oxygen partly has a relationship that is similar to the proportion to $T_\mathrm{e}^{-3.9}$, which agrees with the identified feature in equation 1. Therefore, radiation loss caused by oxygen is expected to be major cause of radiation collapse in this dataset. 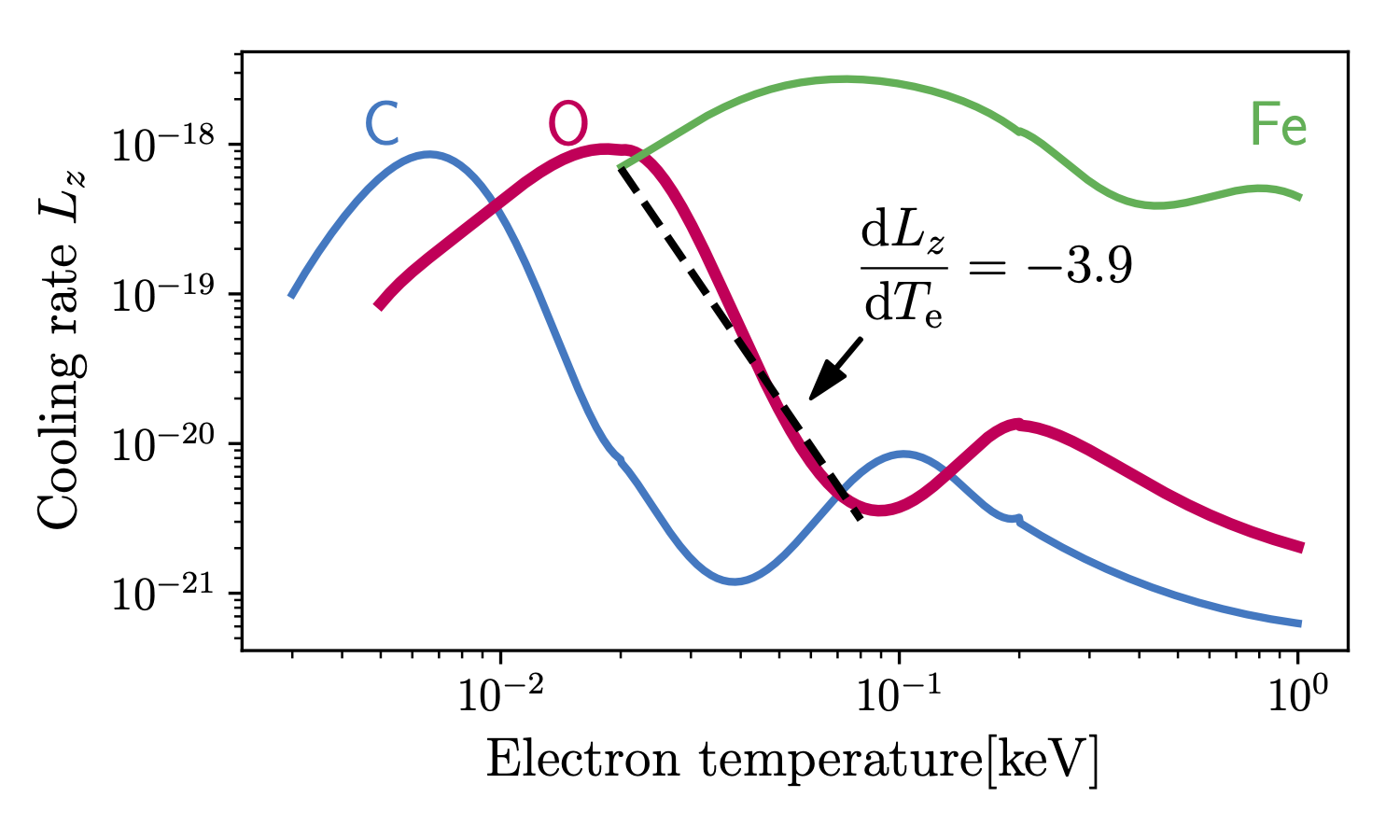