To improve the performance of ECRH, a real-time control system for the deposition location of ECRH was newly developed to compensate the effect of refraction in standard oblique injection of ECRH on LHD. By the control absorption power higher than that without control was maintained under line-averaged electron density $n_{\rm e,avg}\simeq 3\times 10^{19}$ m$^{-3}$. In addition to that, a method of perpendicular injection was developed in order to be more insensitive to the effect of refraction. The achieved central electron temperature in the case of perpendicular injection was about 2 keV higher than that in the case of standard oblique injection for $n_{\rm e0}\sim 1\times 10^{19}$ m$^{-3}$ by 1 MW injection. With such improved performance of ECRH, high density ECRH plasma of $n_{\rm e0}\sim 8\times 10^{19}$ m$^{-3}$ was successfully sustained after multiple pellet injection.

In tokamak and helical fusion plasmas, adjustments of launcher settings of ECRH are necessary to produce high-performance plasma, to realize desired power deposition profiles, to decrease the stray radiation level in the vessel, and to prevent damages of in-vessel components from unabsorbed power during high-power long-pulse injection. The precise evaluation of deposition profiles is also essential for transport studies [1]. For such purposes, two heating methods have been developed to improve performance of ECRH in LHD: (i) real-time deposition location control and (ii) perpendicular injection.

Achieved $T_{\rm e}$ profiles were compared between the two kinds of injection of 1 MW without modulation. Plasmas were sustained by other two 154-GHz gyrotrons with 1 MW injection power each. $T_{\rm e0}$ increased from 4 keV to over 6 keV by perpendicular injection for $n_{\rm e,avg}\simeq 1\times 10^{19}$ m$^{-3}$. The achieved $T_{\rm e0}$ is about 2 keV higher than that in the case of oblique injection.

Such an improved ECRH performance has opened up a new operational region in ECRH plasmas. As shown in Fig. 3, high density plasma with $n_{\rm e0}\sim 8\times 10^{19}$ m$^{-3}$ was successfully sustained after injection of three consecutive deuterium pellets for the first time in ECRH plasmas of LHD. Hollow $n_{\rm e}$ profiles by gas puffing changed to peaked profiles after the pellet injection. Equipartition heating was significant in the high-$n_{\rm e}$ region: $T_{\rm i0}\sim T_{\rm e0}\sim 1$ keV were obtained. The new high-$n_{\rm e}$ region in ECRH plasmas will contribute to comparative studies in transport between W7-X and LHD and to helical reactor designs.

These two techniques for efficient first-pass absorption in the plasma core region are beneficial not only for preventing damages of in-vessel components during long-pulse operations but also for extending high-$T_{\rm e}$ and high-$n_{\rm e}$ operational regimes and precise transport studies. 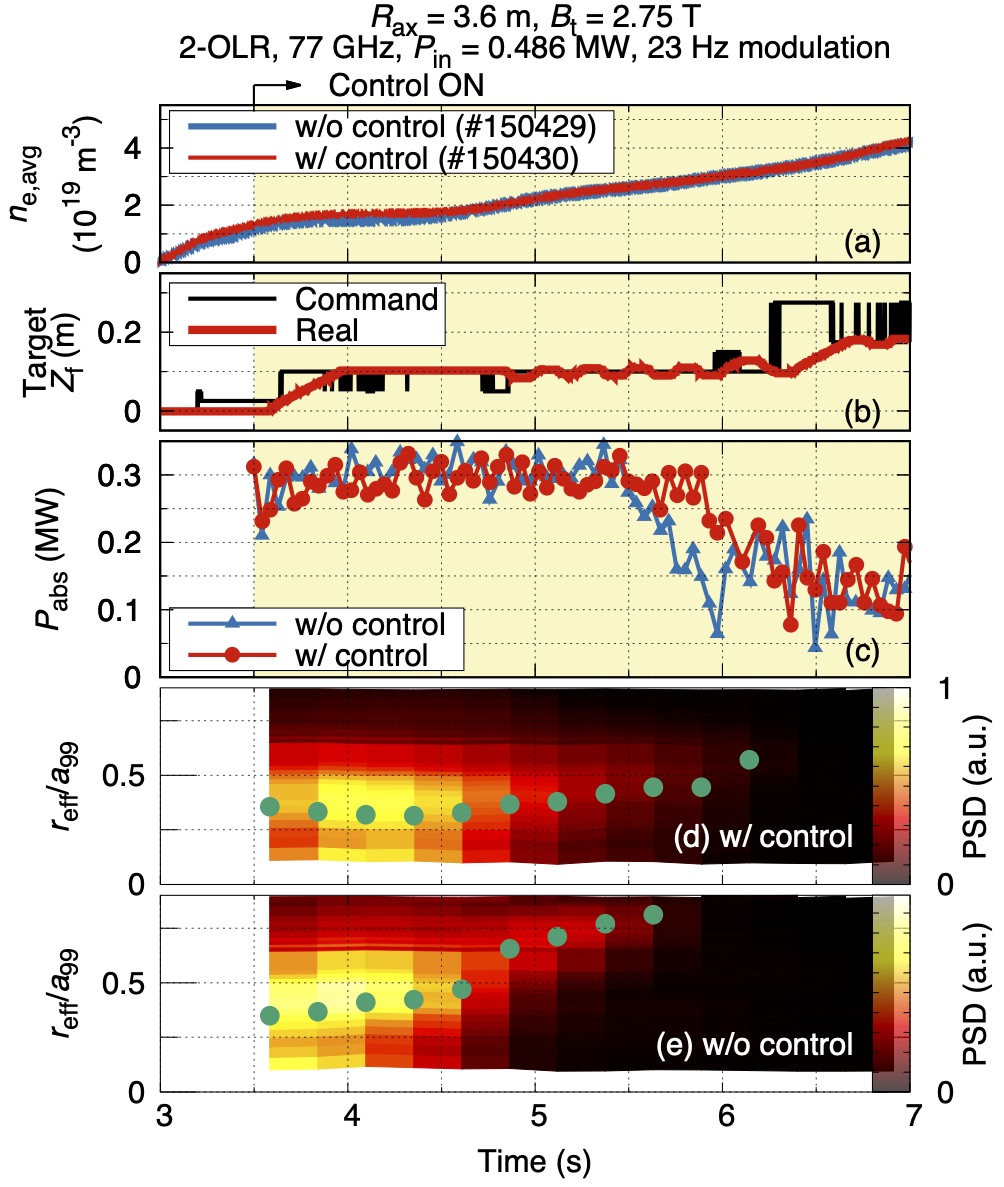 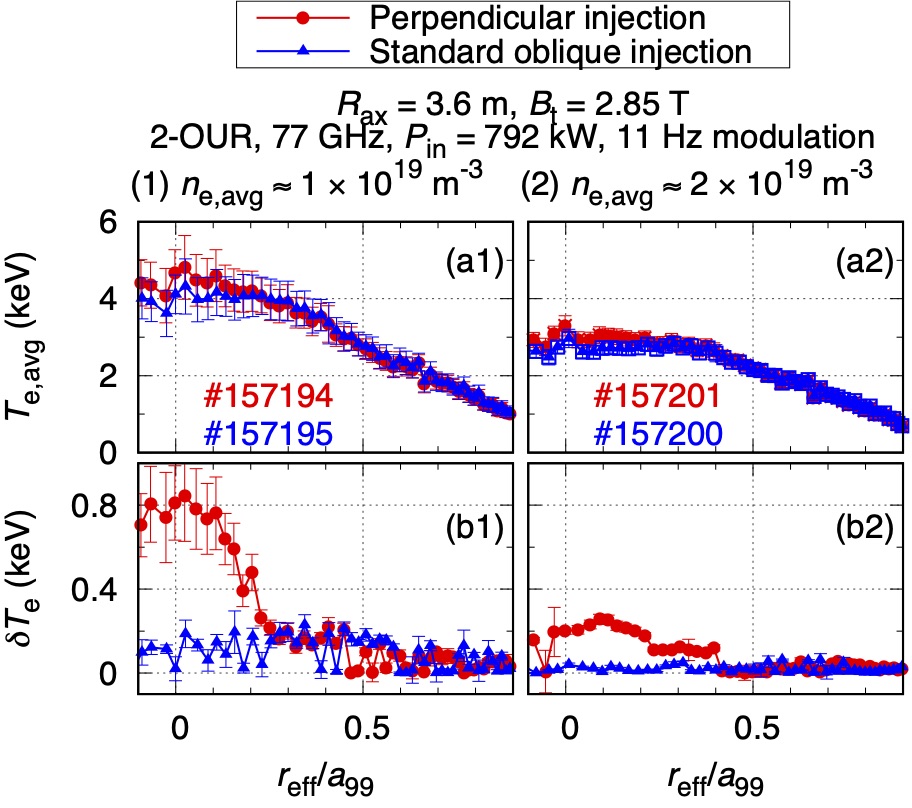 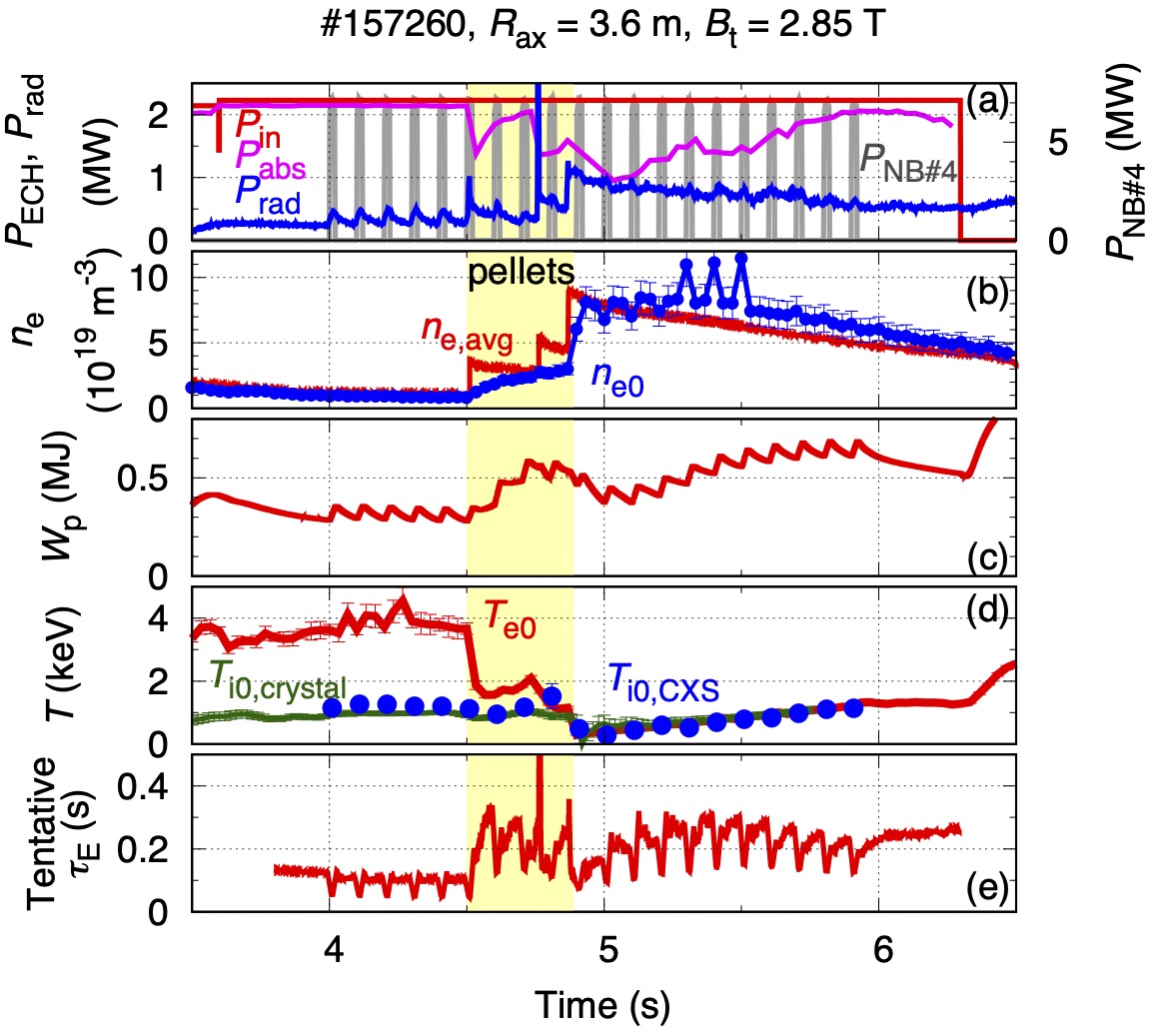