A neural network version of the Multi-Mode Model (MMM) (1), known as MMMnet, has been trained to reproduce the calculation of plasma turbulent diffusivities needed for transport simulations. Model-based control applications require response models with fast (e.g. for closed-loop offline simulations) to extremely fast (e.g. for real-time control and estimation) calculation times, making well-established physics-oriented predictive transport codes challenging or impossible to use in these applications. The control-oriented predictive transport code COTSIM ($\underline{C}$ontrol-$\underline{O}$riented $\underline{T}$ransport $\underline{Sim}$ulator) has been developed to capture the most relevant plasma-response dynamics from a controls perspective while running at a speed useful for control-design applications. In order to achieve this calculation speed, COTSIM relies on simplifying assumptions and scenario-specific models, often leading to a limited range of validity and a lower level of accuracy. Recently, neural-network versions of a number of physics-based codes for both transport (2, 3) and sources (4) have been developed, which significantly reduce the calculation time required while maintaining relatively high prediction accuracies across many different scenarios. Inspired by these recent developments on machine-learning-based plasma-response modeling, a neural network that reproduces the predictions of the Multi-Mode Model for anomalous transport has been developed for DIII-D and is being integrated into COTSIM to enhance its fast prediction capabilities.

The MMMnet model has been trained to reproduce the calculation of the ion thermal ($\chi_i$), electron thermal ($\chi_e$), impurity particle ($D_z$), and toroidal momentum ($\chi_{\phi}$) turbulent diffusivities. A simple artificial neural network structure was used with three hidden layers and 100 nodes per hidden layer. Five separate networks were trained with different initializations of the weights, and the final prediction returned is the average of the five predictions. A low standard deviation between the five predictions indicates that the training is effectively eliminating any randomness introduced by the initial weights. Training data was generated by calling 1000 predictive TRANSP runs based on 83 different DIII-D shots and using MMM as the transport model. Instead of relying on a convolutional neural network to handle spatially-varying data, principle component analysis was applied to the profile data to reduce the number of data points used to describe each profile. This reduced the number of inputs and outputs to the network, thereby limiting the network complexity and calculation time. This version of MMMnet has an average correlation of 86% (see Figure 1) between the neural network prediction and the actual Multi-Mode Model values for data the network did not see during the training process. Figure 2 shows a comparison between the MMM data and MMMnet predictions of all four output profiles for a shot not used in training the network. The red lines are the MMM data and the dark blue lines are the average across the five neural network predictions. The blue shaded area represents one standard deviation above and below the average value predicted by the neural networks. A new version of the MMMnet model is being trained to also include ion particle and poloidal momentum turbulent diffusivities as outputs, making the network useful for many different applications (knowing the ion and impurity densities, the electron density can be computed from the quasi-neutrality condition).

COTSIM is a 1D transport code based on a prescribed MHD equilibrium, although the coupling with a nonlinear Grad-Shafranov solver is under development. It has a modular configuration, which makes adding or removing physics complexity as needed extremely simple. COTSIM can be configured to run by choosing transport and source models from a library of models ranging from empirical scalings to analytical models such as Bohm/Gyro-Bohm and Coppi-Tang. COTSIM is based on Matlab/Simulink, which makes it control-design friendly and capable of running closed-loop simulations and being wrapped by an external optimizer. Moreover, it is capable of simulating full discharges in a time ranging from a fraction of a second to several seconds, depending on the complexity of the models chosen for the simulation, which makes it suitable for effective iterative control design and real-time control applications.

Present efforts are focused on augmenting COTSIM’s model library by incorporating machine-learning- based models for transport and sources. These accelerated physics-based models will enhance the prediction capabilities of COTSIM without compromising its computational speed, while making it more adaptable to different plasma scenarios. In this work, MMMnet is integrated into COTSIM to compute the plasma turbulent diffusivities and enhance the prediction of the toroidal rotation profile and the electron temperature profile, which will in turn improve the prediction of both the resistivity and the toroidal current density profiles. These prediction capabilities play a critical role in rotation profile and current profile control applications. It is anticipated that the machine-learning-based model library will be expanded in the future by integrating into COTSIM additional neural-network models of codes such as TGLF (2), NUBEAM (5), and GENRAY. 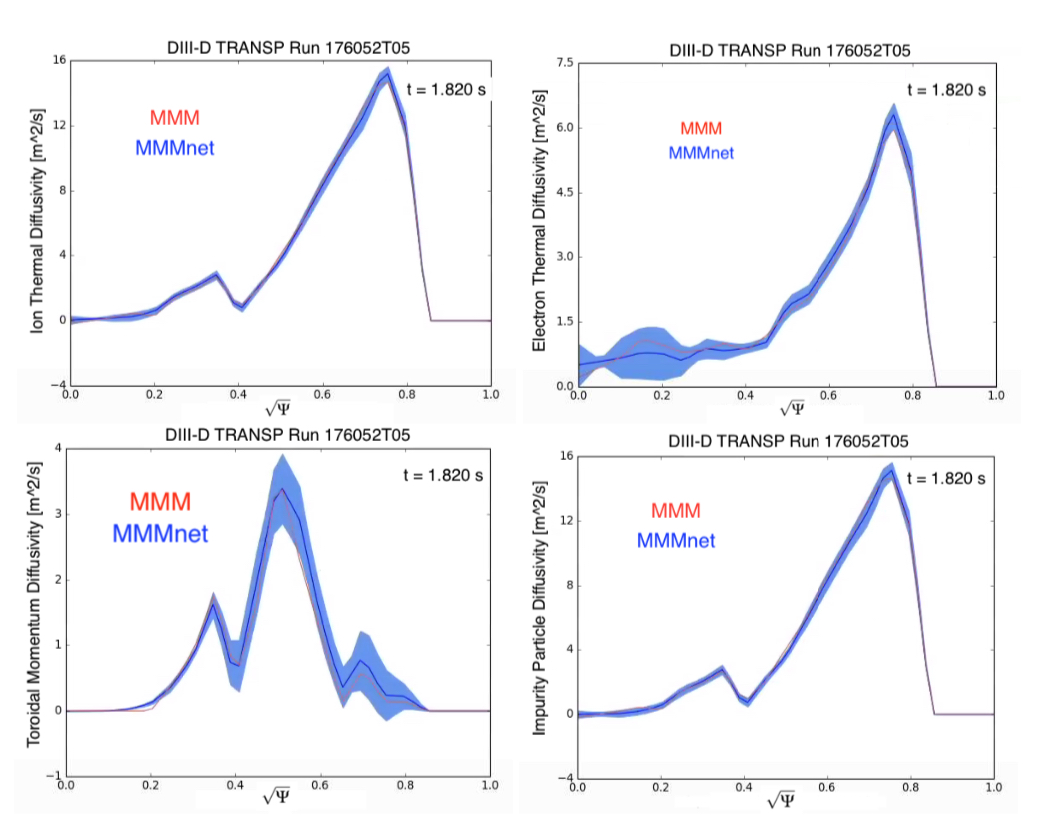