The confinement of fast particles in fusion devices is shown to be strongly affected by Alfvén activity 1 and in order to model the associated wave particle interaction, a proper identification of the excited Alfvén Eigenmodes (AEs) is needed in the first place. The shear Alfvén spectrum is highly dependent on the iota profile of the magnetic configuration 2, which in turn depends on the net current present in the plasma. It has been proven that, in the TJ-II stellarator (R = 1.5 m, a = 0.2 m) 3 small changes on the iota profile, caused by the plasma current, can have a strong impact on the observed spectrum of shear Alfven waves [4, 5]. Ideally, a precise measurement of the iota profile, or failing this, an approximate knowledge of the different contributions to the plasma current is mandatory when it comes to obtaining reliable estimations of the shear Alfvén spectrum. While current drive in tokamaks has been extensively studied both experimentally, theoretically and numerically including comparisons with experiments for NBCD model validation, there have been only very few studies such as [6] of current drive in 3D non-axisymmetric configurations including stellarators so far. 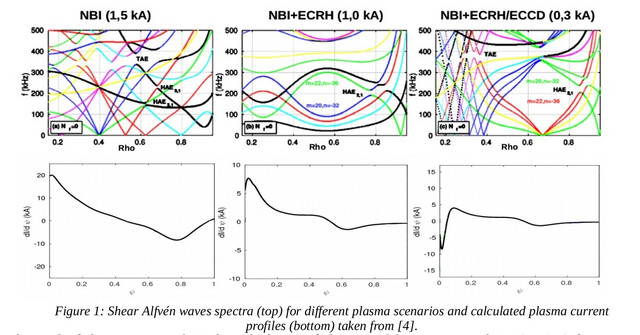 The goal of the present work is the calculation of the neutral beam current drive (NBCD) for non-axisymmetric configurations and its validation in TJ-II NBI heated scenarios. Figure 1 shows the shear Alfven spectrum calculated with the STELLGAP code [7] for different plasma current profiles corresponding to different heating scenarios to illustrate the wide variety of conditions available in TJ-II for these studies.
In co-NBI scenarios (no current compensation), the dominant source of current is NBCD. This current is carried by the fast particles created during the NBI injection and its subsequent slowing down process. Theoretical models [8-10] that calculate the NBCD are available in the literature for different regimes and approximations and all of them rely on the assumption that the steady state fast ion distribution function is known. In order to obtain the fast ion distribution, numerical simulations must be performed. NBCD analysis in W7-AS [6] was carried out by means of a Fokker-Planck simulation code using first a simplified model to obtain the slowing down distribution function and then taking this distribution as input for theoretical NBCD models in the collisional [11] and collisionless [12] regimes. Preliminary estimations of NBCD (Fig. 2) were carried out for TJ-II plasmas [13] considering a more accurate calculation using Monte Carlo simulations. There, beam current drive was calculated using first the Monte Carlo code ASCOT [14, 15] to obtain the fast ion distribution function and NBCD was obtained using the model valid for the long mean free path regime [12].

The simulations performed with ASCOT did not include the charge exchange processes (CX), which have been shown to be very important in the range of energy of TJ-II plasmas; therefore, the NBCD results were corrected with simulations performed with the Monte Carlo code FAFNER [16], which is able to calculate the percentage of lost power due to CX. The calculations showed a reasonable agreement with the experimental data (Table 1).
In this work, neutral beam current drive is thoroughly investigated from numerical and experimental point of view, by carrying out simulations for different plasma parameters obtained in different heating scenarios (NBI with and without ECRH) and comparing with the large available data set. The comparison of the calculated NBCD with the one induced in the plasma when NBI is injected needs an estimation of the bootstrap current [17] contribution to the total measured plasma current (I_NBCD = I_P – I_BOOT). Where possible, a benchmark between FAFNER and ASCOT, both codes using now CX processes, will be presented in order to address the consistency of the theoretical-computational framework. 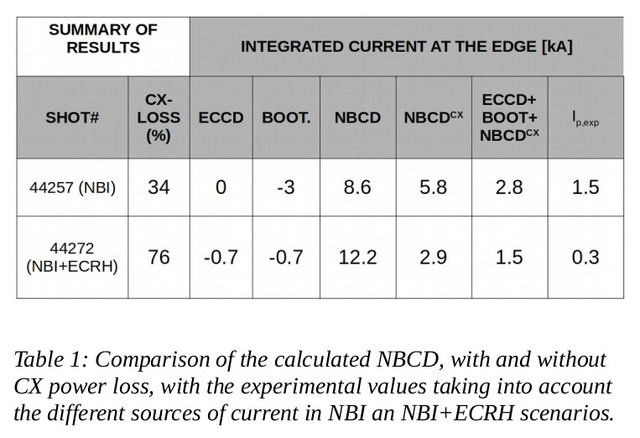