One of the objectives of the JET DTE2 experimental campaign will be related to investigation of alpha particle physics and alpha-driven instabilities (1) along with identifying their effect on plasma performance. Recent JET experiments have shown that the 3-ion ICRF heating schemes are an efficient way for generating a fast ion population in the plasma as a consequence of beam ions acceleration by ICRF waves and can also be applied for maximizing beam-target neutron rate (2, 3). To use such a scheme for alpha heating demonstration in DT plasmas, one should find experimental conditions that allow to accelerate beam ions to energies at which DT reactivity is maximized. Interpretative analysis of existing experiments is an essential step in validation and improvement of physical models required for predictive modelling.
We focus on modelling a multi-ion species plasma discharge with significant fraction of fast ions and improvement of the existing models of thermal and fast ion transport. For interpretative analysis with the TRANSP code (4) we have chosen JET mixed H-D plasma discharges, in which combined D-NBI and ICRF heating was applied using the 3-ion D-(DNBI)-H scheme (3). Modelling such JET plasmas is complicated by describing NBI-ICRF synergy and presence of plasma MHD activity, like sawtooth crashes. Fig. 1a shows a heating scenario for the JET plasma discharge #91257, where beam ions are accelerated from 100 keV to the energies of ~1 MeV by absorbing RF power in the vicinity of the ion-ion hybrid layer in the plasma core, and a high energy tail is formed in the fast ion distribution. These discharges also feature large sawtooth crashes with a long time period (Fig. 1b). A significant difference between the time evolution of the measured neutron rate and the neutron rate computed by TRANSP is observed in the simulations assuming same diffusivity for electrons and thermal ions, i.e. using the standard approach (Fig. 1c). We have found that uncertainties in the terms that enter in the TRANSP particle balance equation are crucial for modelling mixed-plasma discharges, and that increased D transport is necessary to get the TRANSP relative concentration of thermal D ions closer to the experimentally measured values. Our numerical analysis has been improved with including fast ion transport associated with sawtooth crashes. The resulting TRANSP simulations reproduce qualitatively the time evolution of the neutron rate in #91257 (Fig. 1c), although the computed neutron rate still overestimates the measured value. 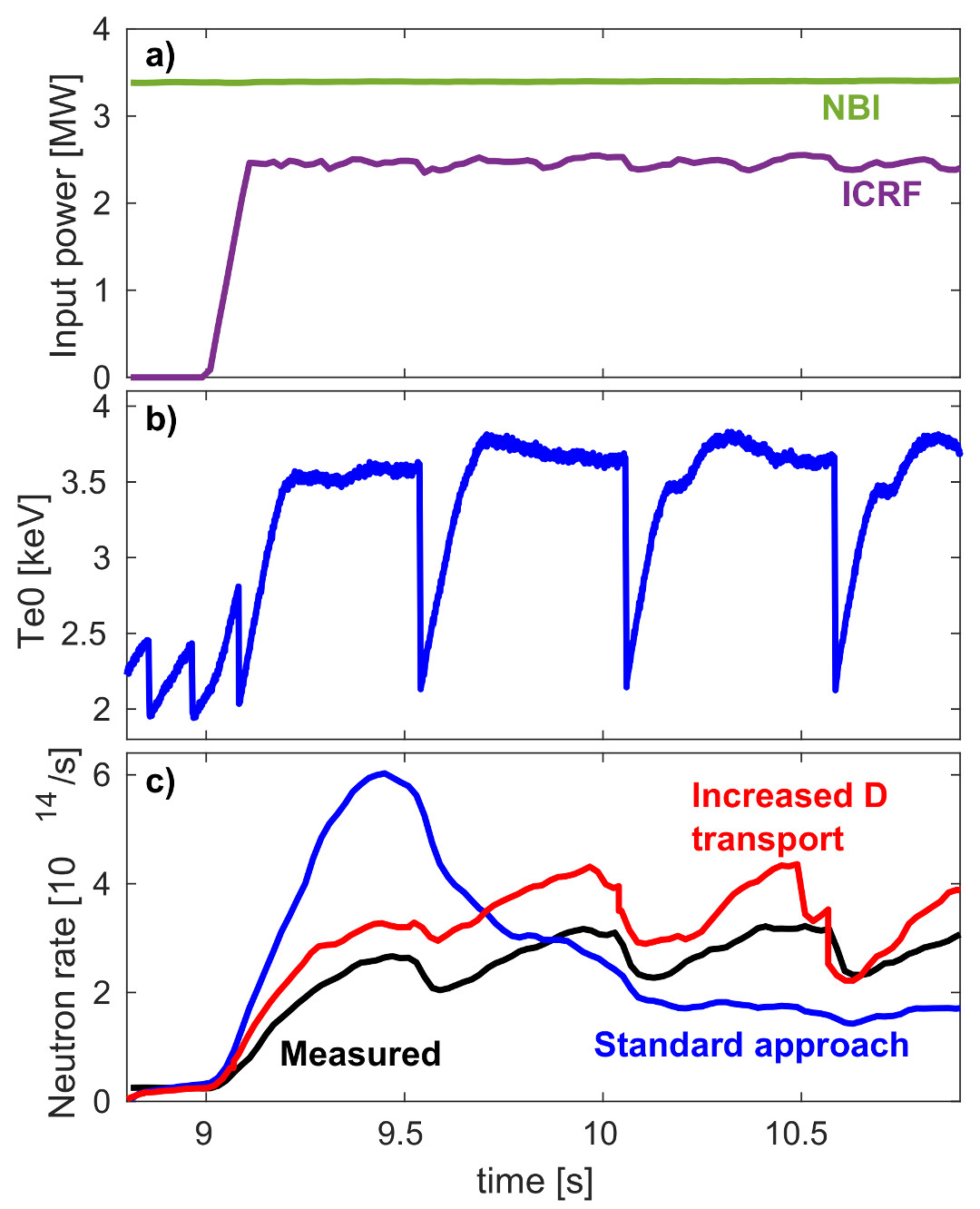 We have performed sensitivity studies on thermal ion transport models used by TRANSP and on particle balance, along with quantitative assessment of their impact on plasma performance parameters, in particular on the neutron rate. Because of lack of ion density profile measurements, the standard approach in TRANSP is to assume the same transport coefficients for thermal ions and electrons, computed from the measured electron density profiles. If TRANSP solves the particle balance equation using this approach, it leads to a negative ion outflux in the plasma core. Simulation results demonstrate continuous accumulation of D ions in the plasma core and, consequently, an overestimated neutron rate. Growth of D ion density is expected and naturally related to thermalization of D beam ions. However, increase of the relative concentration of thermal D ions in the simulations significantly exceeds the isotopic ratio measurements at the plasma edge. Uncertainties in the TRANSP particle balance equation are related to the ion outflux model settings. With modified settings that increase D transport, the ion outflux becomes positive, leading to lower D density and the neutron rate. In line with experimental observations, we observe a slow growth of D density, calculated by the particle balance equation taking into account the NBI particle source and charge exchange losses provided by NUBEAM (5). The problem of choosing appropriate settings for the thermal ion transport models becomes particularly important for simulations of mixed plasmas with ICRF heating, for which the location of the RF absorption region depends on the plasma composition.
Fast ion distribution is significantly modified in the presence of sawtooth activity. During the sawtooth crash, fast ions are redistributed radially (Fig. 2), causing a reduction in the neutron rate. The redistribution of fast ions due to a sawtooth crash is usually modelled without taking into account their energy and orbit types. A reduced model can be used to estimate the effect of low-n MHD instabilities like the sawtooth activity on fast ion transport (6, 7) and to include fast ion orbital dependence. With transport coefficients obtained from the ORBIT code (8), this model improves physical representation of fast ion redistribution. In our numerical analysis, we show not only the ability of TRANSP to reproduce main trends in the neutron rate, but there is also an indication that fast ion transport induced by sawtooth crashes has an impact on the neutron rate, and thus more sophisticated models are necessary to describe modifications in the fast ion distribution function. 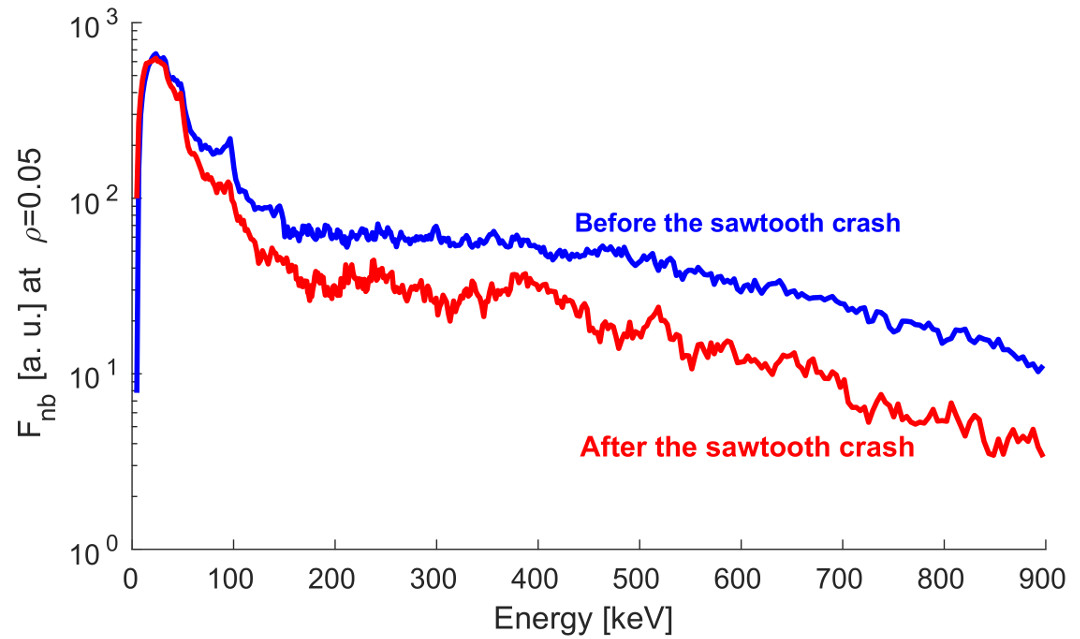 There are a few possible reasons why the computed neutron rate is overestimated in our TRANSP simulations. With sensitivity studies we estimate influence of TRANSP input parameters on the computed neutron rate. Depending on the quality of experimental data and fitting methods, some variation can be expected in these parameters as well as in the computed neutron rate. Thus, validated diagnostic data are essential for reliable interpretative analysis. Another limitation is related to the fact that we do not have a complete set of physical models in TRANSP, and it does not allow us to take into account self-consistently effect of MHD activity on the fast ion transport. Further numerical analysis also requires advanced description of wave propagation in the plasma with large fraction of fast ions. In the presented TRANSP simulations, the TORIC code (9) assumes a Maxwellian distribution for the fast ion species. Development of a consistent model with a non-Maxwellian distribution function in TRANSP is in progress (10) and aims to improve the description of RF wave propagation and absorption in plasmas, containing a significant fraction of fast ions.
This material is based upon work supported by the U.S. Department of Energy, Office of Science, Office of Fusion Energy Science, under contract number DE-AC02-09CH11466. This work has been carried out within the framework of the EUROfusion Consortium and has received funding from the Euratom research and training programme 2014-2018 and 2019-2020 under grant agreement No 633053. The views and opinions expressed herein do not necessarily reflect those of the European Commission.
References
(1) R.J. Dumont et al, Nucl. Fusion 58 082005 (2018). (2) Ye. O. Kazakov et al, 2017 Nature Phys. 13 973. (3) J. Ongena et al, 2017 EPJ Conf. 157 02006. (4) R. J. Hawryluk, 1980 Phys. of Plasma Close to Thermonucl. Cond. 1 19. (5) A. Pankin, D. McCune, R. Andre et al., 2004 Computer Phys. Comm. 159 157. (6) M. Podestà et al, 2014 Plasma Phys. Control. Fusion 56 p. 055003. (7) D. Kim et al, 2019 Nucl. Fusion 59 086007. (8) R. B. White and M. S. Chance, 1984 Phys. Fluids B 2455. (9) M. Brambilla, 1999 Plasma Phys. Control. Fusion 41 1. (10) N. Bertelli et al, 2017 Nucl. Fusion 57 056035.