Here we report progress in electrical and mechanical performances of mechanical joints of high-temperature superconducting (HTS) conductors and methods to evaluate those quality. Our research activities showed that (i) Joint resistance for bridge-type mechanical lap joint and mechanical edge joint have been reduced to be acceptable value for HTS helical coils in FFHR-d1 helical fusion reactor, (ii) The bridge-type mechanical lap joint with indium insertion is preferable for use in joint-winding of the HTS helical coil because of its mechanical behaviour, and (iii) X-ray computer tomography (CT) scan and contact-probing current transfer length (CTL) method are promising to predict joint resistance, and quality control of the joints during fabrication process at room temperature before applying current.

Two designs of segment-fabrication of HTS helical coils have been proposed for FFHR fusion reactors, joint-winding of the HTS coils wound by connecting conductor segments, and the “remountable” HTS magnet (here “remountable” means being able to mounted and demounted repeatedly) assembled from coil segments with remountable joints. Fig. 1 shows schematic illustrations of the two designs. Bridge-type mechanical lap joint and mechanical edge joint are planned to be applied to those two designs, respectively. The broad surface of the stepwise stacked REBCO HTS tapes are joined mechanically via the joint piece in the bridge-type mechanical lap joint whereas the side edges of the stacked REBCO tapes are joined in the edge joint. The electric and mechanical performances of the joints and those quality assessment are important technical issues for the designs. 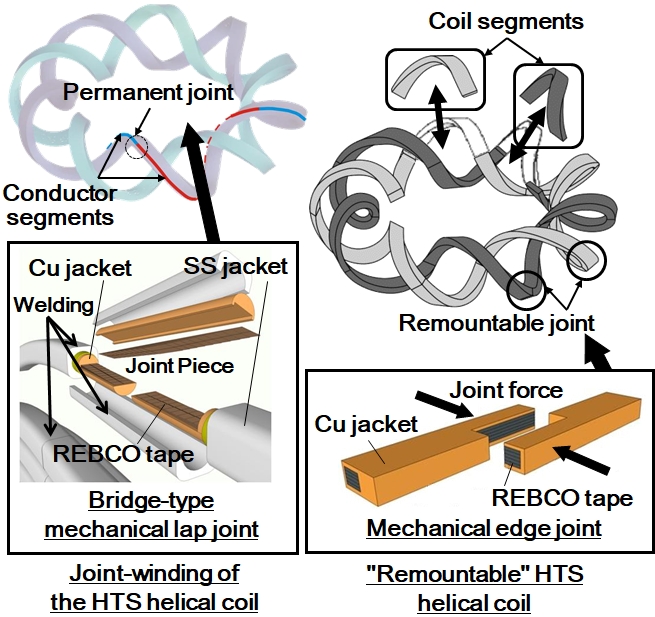 Hashizume and Ito of Tohoku University started to develop the mechanical lap and butt joints in 2000 and they also proposed bridge-type mechanical lap joint and mechanical edge joint with indium-foil insertion based on previous two joints, respectively [1]. Fig. 2 shows progress in joint performances for mechanical lap joint including the bridge-type joint and edge joint for this decade. In 2012, Tohoku University and NIFS started to develop the Stacked Tapes Assembled in Rigid Structure (STARS) conductor using REBCO tapes and its joint. We achieved a joint resistance of 1.8 nΩ at 100 kA, 4.2 K using bridge-type mechanical lap joint [1, 2]. We additionally introduced two techniques for these five years, heat treatment at around 100°C [1, 2] and integrated joint piece [3]. These techniques have reduced the joint resistivity (product of joint resistance and contact area) to those in single-tape joints and fabrication time of the large-scale joint from over a half day to within three hours. The mechanical edge joint has been also progressed and its performance reached to the same level as the bridge-type joint. The target value of joint resistivity is less than 10 pΩm2 from a viewpoint of electric power for cooling the magnet with joint length of <1 m in the FFHR fusion reactor, and the achieved joint resistivity satisfies the required performance. 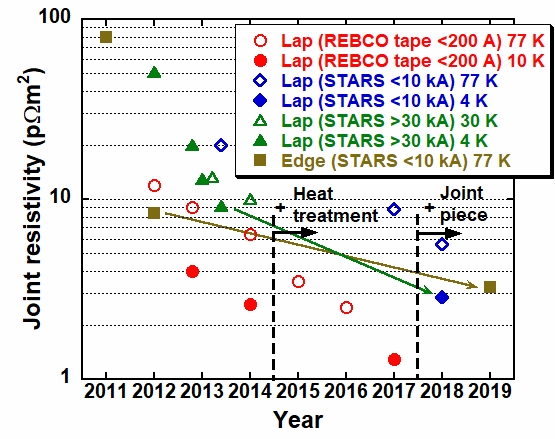 A structural analysis of continuous HTS helical coils assuming joint-winding indicated that a maximum shear stress of 32–35 MPa is induced in the plane of the joint surface [1]. Fig. 3 shows shear strength of mechanical lap joint with indium-insertion as a function of contact resistivity (product of contact resistance between REBCO tape and indium foil, and contact area) and it is almost the same as the maximum in-plane shear stress of 35 MPa even with 100 MPa joint pressure. In the cohesive failure case, the joint resistance only increased slightly with increased displacement whereas soldered lap joints showed sudden resistance increase after its failure due to stress concentration [1]. REBCO tapes can only be displaced by less than 50 μm in the actual magnet due to the presence of the jacket. Therefore, the proposed joint is preferable for use in joint-winding of the HTS helical coil. 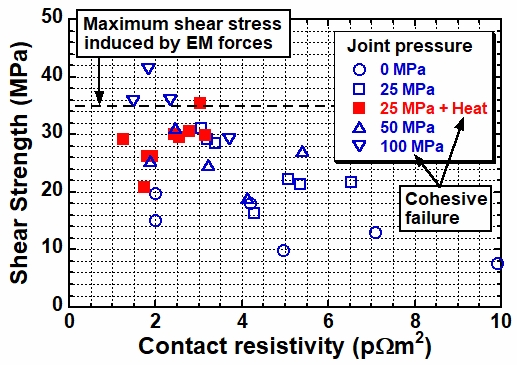 REBCO tape has interface resistance between its superconductor and stabilizers. We developed contact-probing CTL method [4] for nondestructive evaluation of the interface resistance before REBCO tape selection. Quality control for the joints during fabrication at room temperature is another important issue, and we also developed a method to evaluate contact area at the joint section based on X-ray CT scan [5]. Fig. 4 shows relationship between contact area evaluated by X-ray CT scan and contact resistance between HTS tape surface and indium foil. The contact resistivity was between 2 and 6 pΩm2 after introducing the heat treatment during the fabrication process, which was less influenced by configuration of the joint. 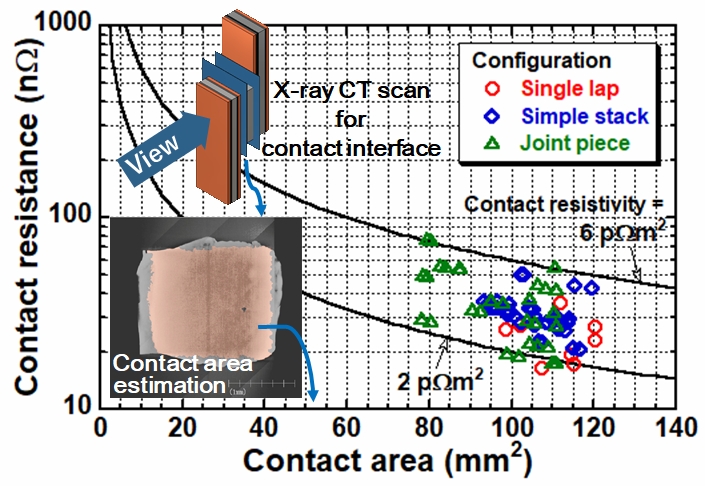