The high-power reconnection heating of merging spherical tokamak (ST) plasmas has been developed by TS-3U, TS-4U$[1]$, UTST, MAST$[2]$ and ST-40 experiments and PIC simulations$[3]$, leading us to direct access to burning and high-beta ST often with absolute minimum-B without using any additional heating like neutral beam injection (NBI). All of them confirmed, (i) the promising scaling of ion heating energy increasing with square of reconnecting magnetic field $B_{rec}$ ~ poloidal magnetic field $B_p$. (ii) ST-40 recently extended the maximum ion temperature $T_i$ up to 2.3keV. TS-3U, ST-40 and MAST experiments found that (iii) the reconnection heating forms interesting high-beta ST plasmas with hollow $T_i$ profile and often with absolute minimum-B (TS-3U) and that (iv) the toroidal field $B_t$ does not affect ion heating energy as high as 40-50% of poloidal magnetic energy for $q$>1 and also that (v) $B_t$ does not affect the global hollow $T_i$ profiles of the produced new ST plasma but its local $T_e$ profiles, forming the more peaked $T_e$ profile in the higher $q$ regime. 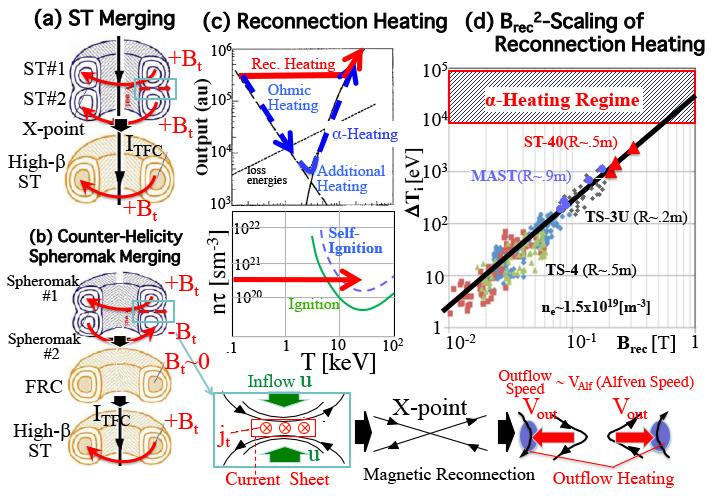 As shown in Figs. 1(a)(b), we axially merge two STs or spheromaks to form a new high-beta ST or the FRC which is transformed into a high-beta ST. In Fig. 1(d), all of TS-3U (ST, FRC: $R$=0.2m), TS-4U (ST, FRC: $R$=0.5m), UTST (ST: $R$=0.45m), MAST (ST: $R$=0.9m) and ST-40 (ST: $R$=0.5m) agree that the ion temperature increment $\Delta T_i$ increases with $B_{rec}^2$ ~$B_p^2$ up to 2.3keV under constant electron density $n_e$ ~ $1.5 \times 10^{19}$ $m^{-3}$, provided that the current sheets are compressed to the order of ion gyroradius. It is because the ion heating does not depend on plasma size but on the reconnection outflow whose speed is the order of poloidal Alfven speed $V_{Alf}$ = $B_{rec}$ / $\sqrt {\mu_0 m_i n_i}$ ). As shown in Fig. 1(c), this heating scheme with no temperature dependence enables us to realize the burning ion temperature (red line) over 5-10keV without using any additional heating, in sharp contrast with the conventional ohmic heating scenario with additional heating (blue line). TS-3U and MRX found that the reconnection converts about half of poloidal magnetic energy of the merging STs mainly to ion thermal energy of the new ST. This heating enables us to increase $T_i$ to the optimized value in Lawson diagram of Fig. 1(c), keeping $n \tau$ roughly constant or larger. 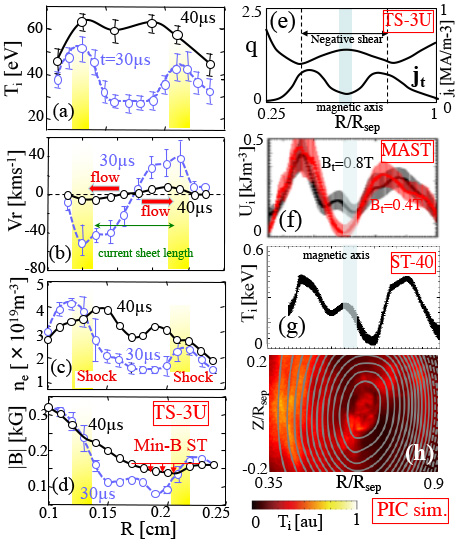 Then the next important question arises as to what type of ST plasma this reconnection heating produces. Figures 2(a)-(d) show radial profiles of $T_i$, radial velocity $V_r$ measured by Doppler probe, $n_e$ by electrostatic probe and absolute value of magnetic field $|B|$ by magnetic probe at $t$=30$\mu$s (during reconnection) and at $t$=40$\mu$s (after merging) when we merge two ST plasmas with $B_t$/$B_p$~5 in TS-3U. We can confirm that the bi-directional reconnection outflow $V_r$~40km/s almost equal to 70% of poloidal Alfven speed dumps at the two “shock-like” downstream positions ($R$=0.14 and 0.21 m) where all of $T_i$, $n_e$ and $|B|$ peak. Similar hollow profiles of $T_i$ were observed both in MAST and ST-40, indicating that the common ion heating mechanism validates the $B_{rec}^2$-scaling in those merging experiments in Japan and UK. It is noted that the hollow profiles of $T_i$ and $|B|$ are maintained in the new STs after the merging is over. Especially, $|B|$ is minimized at around magnetic axis, indicating absolute minimum-B formation.
In present merging experiments, only TS-3U and TS-4U can measure internal magnetic field profile of absolute minimum-B configuration but MAST and ST-40 can measure similar double-peaked or hollow profiles of $T_i$ and ion pressure $U_i$. Figures 2(e)-(g) show radial profiles of $q$-value and toroidal current density $j_t$ in TS-3U and $U_i$ in MAST and $T_i$ in ST-40 measured by Doppler spectroscopy. The produced new high-beta ST has the double peaked $U_i$ or $T_i$, indicating its hollow thermal pressure profile of high-beta ST.
The recent PIC simulation of merging ST and spheromaks also confirmed the $B_{rec}^2$-scaling of reconnection (ion) heating and revealed that the 2D contour of $T_i$ has ring-type high $T_i$ region just when the merging is completed, as shown in Fig. 2(h). This fact indicates the double peaked $T_i$ profiles in Figs. 2(a)(f)(g) are due to the ring-type high $T_i$ area. All of those experiments and PIC simulation agree that the merging STs are transformed to the new high-beta ST with hollow and/or double peaked pressure profile. The reconnection proceeds from the outer flux surface to the core flux and the outflow speed of reconnection peaks in the middle of merging. It is probably the reason why $T_i$ becomes hollow in the produced ST configuration.

This hollow pressure profile is found to be connected with the absolute minimum-B configuration. Figure 3 shows 2D contours of $|B|$ (and poloidal flux) of STs for four different $B_t$, which are formed by type (b) merging in Fig. 1 together with that of low-beta ST without reconnection heating. While an FRC also has absolute minimum-B areas both at magnetic axis and at geometric axis, the high-beta ST has wider absolute minimum-B area at around magnetic axis due to strong $B_t$ around small $R$ area.
The series of merging experiments and PIC simulations confirmed the $B_{rec}^2$-scaling of reconnection heating up to 2.3keV and formation of the double-peaked or hollow $T_i$ and thermal pressure profiles sometimes with absolute minimum-B profile after the merging is over. Our Balloo code analysis indicates the absolute minimum-B is connected with the second-stable ST for ballooning instability. The reconnection heating is unique, cost-effective and useful to heat fusion plasmas directly to the alpha-heating region, to the optimized $T_i$ area in Lawson diagram without using any additional heating.