Here we report the mechanism of plasma heating by magnetized fast-isochoric (MFI) heating scheme (1). The mechanism was visualized experimentally by combining spectroscopic and spatially- and temporally-resolved X-ray imaging techniques. The MFI scheme employs an external magnetic field for guiding a high-intensity relativistic electron beam (REB) generated by relativistic laser-plasma interactions to a small and dense fuel core along magnetic field line. Our studies clarified the followings; (i) the REB guiding resulted in doubling the drag heating efficiency up to 8% (2), (ii) ultra-high-energy-density region having 2.0 keV of temperature and 2.2 Peta-Pascal of the pressure was created with 12% of energy coupling efficiency through the diffusive heating process, namely by heatwave propagating in the core with 10$^{8-9}$ cm/s of the speed (3), (iii) 8% of the current drag coupling efficiency is scalable to >15% of the efficiency in an ignition-scale high area-density core (> 0.5 g/cm2) and heating laser intensity (1 x 10$^{20}$ W/cm$^2$) based on a model (4) that are fairly consistent with the experimental observations. This efficiency is >3 times higher than that of the currently pursed central ignition scheme.
The fast-isochoric heating may produce the ignition spark with avoiding ignition quench caused by the fluid mix between the spark and a cold fuel layer. This mix is a crucial problem of the adiabatic compression heating in the central ignition scheme. In the fast-isochoric heating scenario, a relativistic intensity laser, namely heating laser, generates the high-intensity REB. The REB carrying a significant fraction of the heating laser energy travels in an over-dense plasma from its generation zone to the pre-compressed fuel core. Part of the REB's kinetic energy is deposited in the pre-compressed core, and then the heated plasma core becomes the ignition spark. There are two major mechanisms in the fast-isochoric heating process as illustrated in Fig. 1. One is the drag heating mechanism, where energy is transferred from REB to the fuel core by electron-electron binary collisions. The other is the diffusive heating mechanism, where energy is transferred by thermal conduction to a cold plasma from a high-temperature plasma that is heated by the resistive return current induced by the forward REB current. Kilo-tesla magnetic field is required to guide the forward REB current and also the return current within a diameter of the pre-compressed core. A laser-driven capacitor-coil target was used to generate a kilo-tesla magnetic field (5,6). 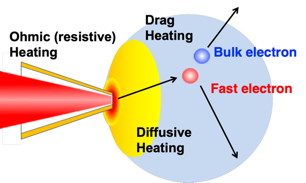