The high coupling efficiency ($\eta_c$) can be achieved by using a shell target with holes in the direct fast ignition. Here, we have made it clear that a diffusive heating is not negligible compared with a collisional and a resistive heating. In order to obtain high $\eta_c$, it is important to maintain the low effective hot electron temperature ($T_{eff}$). In the shell target with holes, $T_{eff}$ can be suppressed by the prevention of the blow-off plasma, which comes from target irradiation by the compression laser (Gekko XII/$2\omega$:GXII) on the heating laser (LFEX/$1\omega$) path. Each heating contribution can be estimated from the electron/ion measurements. The maximum energy of 7±2 J is deposited to the core as the electron collisional heating in the heating LFEX energy of 343 J. 12±3 J can be estimated to be deposited to the target as the ion collisional heating. The resistive+diffusive heating is 22±10 J. The simulation also suggests similar tendency about the heating mechanism.
A fast ignition is performed by auxiliary heating to the imploded core. It is found that the heating laser does not provide the sufficient $\eta_c$ because the ablated plasma prevents the penetration of the heating laser in the direct fast ignition. Kitagawa \textit{et} $al.^{1)}$ has succeeded to realize low $T_{eff}$ even at the direct fast ignition, by using the spherical shell with two holes along to the LFEX axis. Here, the ablation plasma from the compression laser does not invade to the LFEX laser path. Since an areal density ($\rho R$) in our experiment is much smaller than the stopping by range of $T_{eff}$, the deposit energy is roughly the electron energy with the range equivalent to $\rho R$. When the number of electrons increases if $T_{eff}$ becomes low, total deposit energy as collisional also increases. The resistive heating also increases because the electron current increases. The diffusive heating comes through the diffusion from the plasma directly heated by the electric field of the heating laser. This means the source of the diffusive heating is deduced from super low energy component of the hot electron. Therefore, the diffusive heating also increases if $T_{eff}$ is low.
In the experiment, the electron energy spectrometers (ESM)$^{2)}$ to observe electron/ion spectra, Mandala neutron spectrometer to monitor the neutron energy spectrum, CR39 knock on proton measurement system to observe the target $\rho R$ and X-ray pinhole camera (XPHC) to monitor the core radius and the total absorbed energy, are used as shown in Fig. 1. X-ray streak camera (XSC) monitors the LFEX injection timing. A deuteride polystyrene shell of $500 \mu m^\phi$ and $7 \mu m^t$ with two holes of 100 $\mu m^\phi$ along the axis of LFEX is used as the target. Six beams of GXII with 1 ns Gaussian pulse, which are located at transverse direction to LFEX axis, compress the shell and creates the imploded core. LFEX auxiliary heats the core at the stagnation phase timing, which is
monitored by XSC. $T_{eff}$ is estimated at 0.86 MeV from the slope of ESM signal in Fig. 2(a). The amount of generated electrons can be estimated as follows; At the laser energy level used in this experiment, the reflection is assumed to be 25 \% from the previous experiment$^{3)}$. Therefore, it is estimated that 75 \% of the laser energy (343 J) is converted to hot electrons (here, ion number itself is assumed to be small). The maximum number of generated electrons can be estimated if this energy is divided by $T_{eff}$. However, hot electrons have a divergence angle. If the spatial distribution of the hot electrons is assumed to be uniform, the maximum number of electrons irradiated to the core is roughly half. On the other hand, the stopping energy at $\rho R$ = 0.0122 $g/cm^2$ is 0.077 MeV for electron. This means that each electron loses the energy of 0.077 MeV independent on the electron energy. Therefore, the maximum of 7±2 J is deposited to1 the core as the electron collision.
Heating by ions cannot be ignored in direct fast ignition. The deuterium ions accelerated by the ponderomotive force, hit the target deuterium and generate neutrons by the DD reaction (beam neutron). Here, the thermal neutrons are not dominant comparted with so-called beam neutrons. The average ion energy $T_{ion}$ can be estimated to be 0.33 MeV from the ion spectrum measured by ESM as shown in Fig. 2(b) (red line). This DD nuclear reaction cross section can be also obtained from $T_{ion}$. $\rho$ can be obtained from $\rho R$ and the core radius $R$ obtained from XPHC. The SRIM code can determine the ion stopping range. The number of target deuterium required for the reaction can be estimated. The number of neutrons is measured to be $3.7\times10^8$ by Mandala, thus the number of accelerated ions can be calculated. Since ions have a short stopping range, we assume that all relevant ion energy is deposited to the target. Therefore, 12±3 J can be estimated to be deposited to the target as the ion collision. On the other hand, the increase of the internal energy due to additional heating by LFEX can be obtained to be 41±9 J from the comparison between the brightness measured by XSC/XPHC assuming a blackbody radiation and the temperature without LFEX observed by the Mandala neutron spectrum assuming $T_e=T_i$. The high $\eta_c$ can be achieved in this configuration. The value is considerably larger than the sum of electron/ion collisional heating (19±4 J). Considering that resistive heating is comparable to collisional heating, the diffusive heating may be candidate of the discrepancy according to the simulation$^{4)}$. 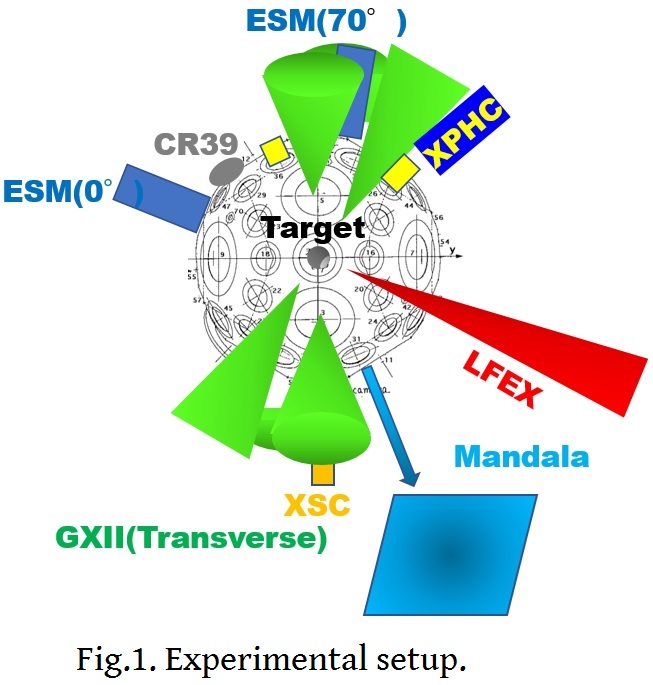 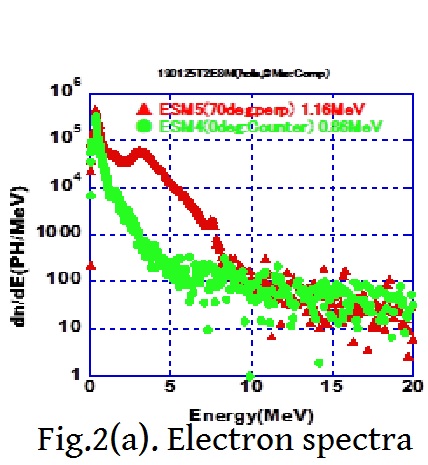 $T_{eff}$ can be obtained from the slope of the spectrum. $T_{eff}$ keeps low especially at the counter direction against LFEX. 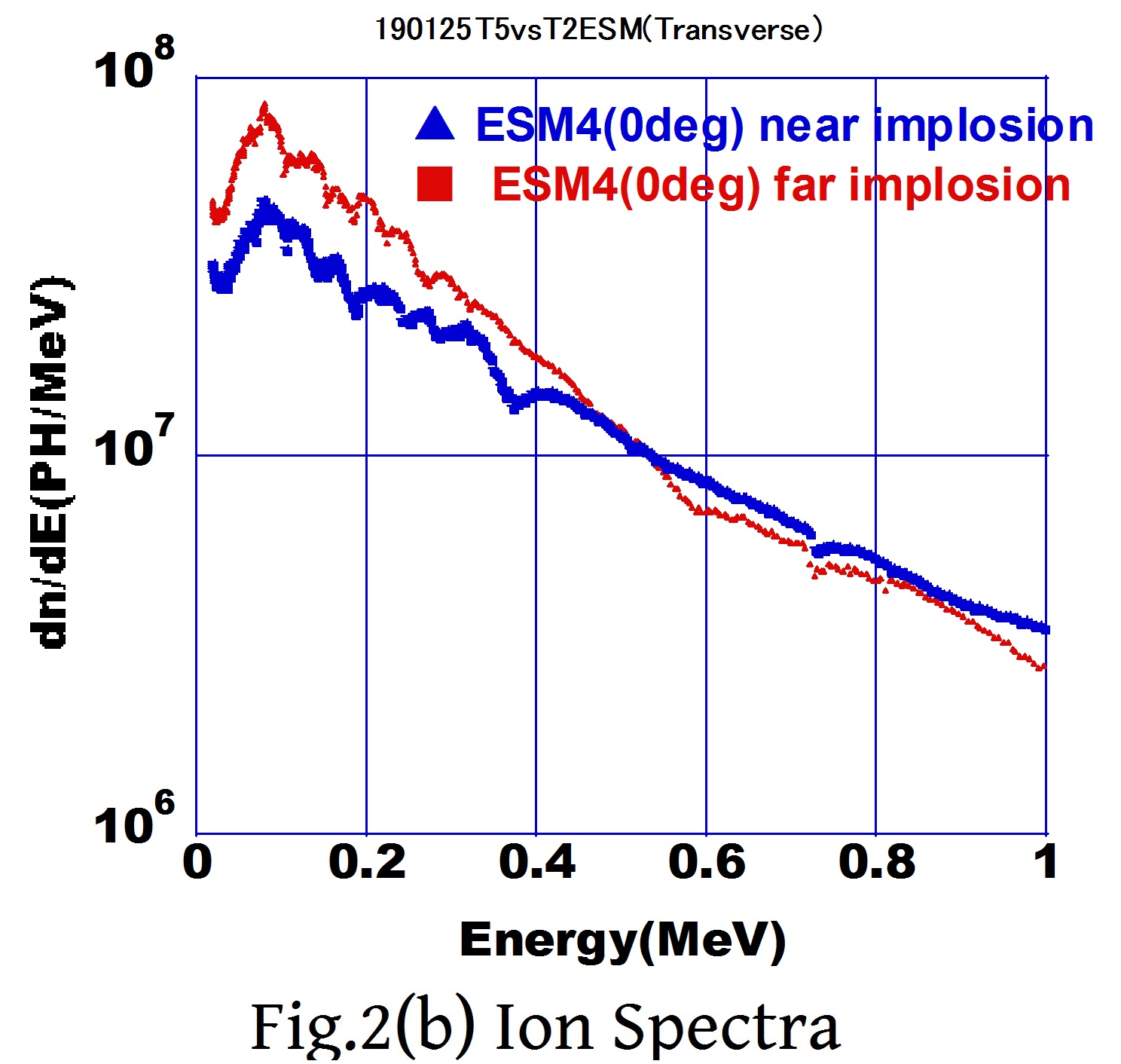