In magnetic confinement fusion devices, the plasma density is largely self-sustaining through internal recycling processes. While refueling the plasma, the recycling neutrals can also considerably affect the energy transport in both the plasma confinement and exhaust regions. A quantitative understanding of the neutral-related effects first requires a precise knowledge of the origin and source strength of the recycling neutrals, which is difficult to obtain in stellarators due to the inherent three-dimensionality. The W7-X stellarator is equipped with an island divertor with ten identical divertor modules. Most of them are monitored with $H\alpha$-cameras and neutral pressure gauges. In addition, two Langmuir probe arrays are mounted on one lower and upper divertor target, respectively. They are the most relevant diagnostics for the recycling process. Nevertheless, these diagnostics alone are unable to quantify the recycling neutrals either because of their local access to the plasma or because the interpretation of their results relies on physical quantities that are not readily available experimentally. One way to overcome these difficulties is to combine them with the EMC3-Eirene code in such a way that the code results are compared with the local measurements. Through experiment-modeling comparison, this paper attempts to make a first quantitative assessment of the source and transport of the recycling neutrals in W7-X. To this end, a feasibility and case study has been started. Most important here is the determination of the internal recycling flux. 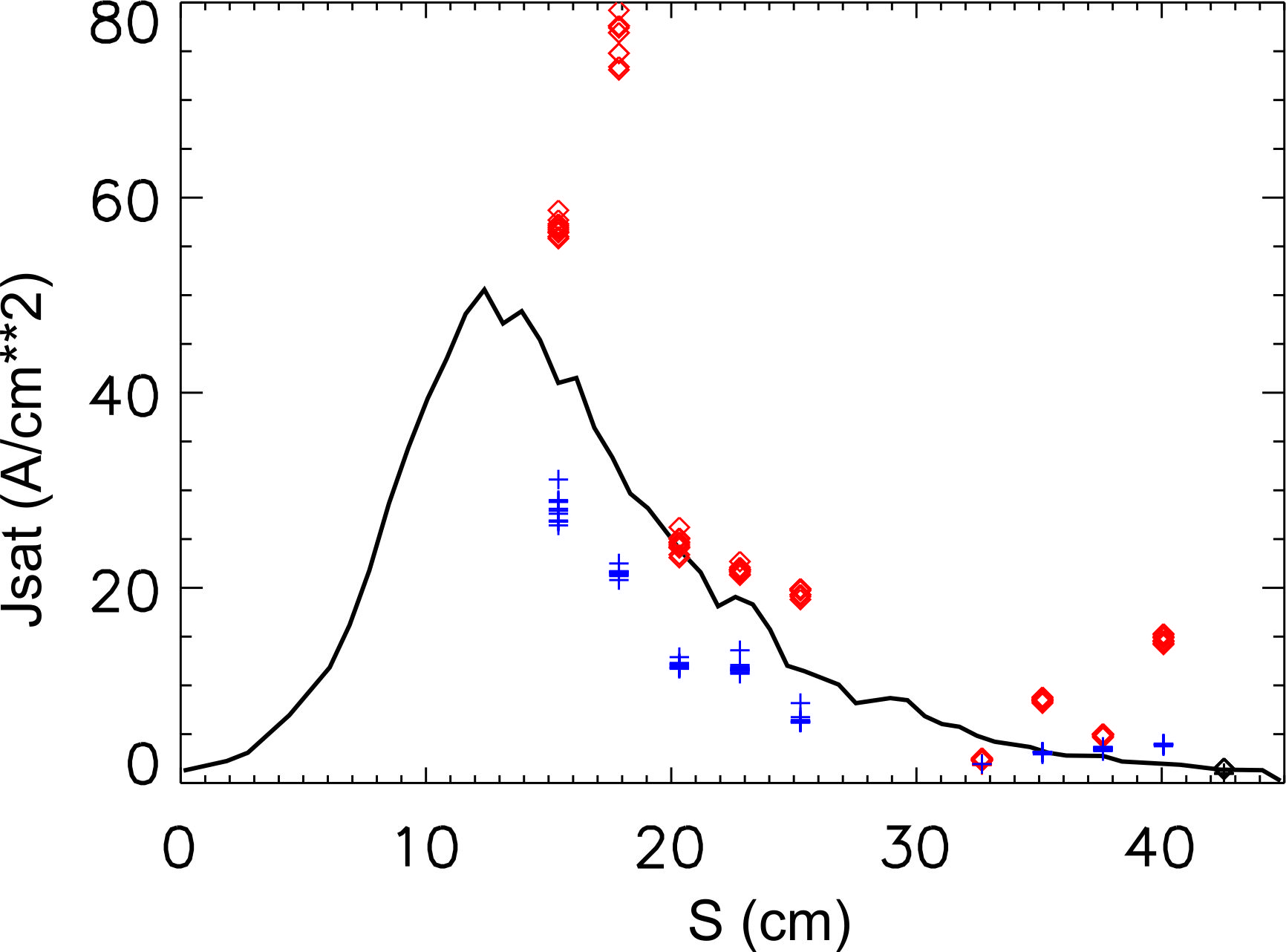 The target probes can measure the local ion saturation current densities $J_{sat}$, but cannot provide sufficient information on the global recycling in the machine due to their limited number and location. An example is shown in figure 1, which compares the particle fluxes calculated by the 3D code and measured by the Langmuir probes for #20180814.25 at the time point of maximum $J_{sat}$. The standard iota = 5/5 divertor configuration is chosen for the comparison. The island control coils were not used, which would otherwise shift the deposition profile towards the divertor gap, i.e. further away from the probes. With a heating power of 5 MW and a diffusivity of 0.5 $m^2/s$, the separatrix density is varied in the simulations widely enough to fully cover the experimentally relevant range. The intrinsic carbon is assumed as the only impurity species and its yield is 4% of the hydrogen recycling flux. Although their positions are far from optimal, the target probe arrays, in combination with the IR- und $H\alpha$-cameras, are still useful for estimating the perpendicular transport coefficients. The up/down asymmetry in the measured ion saturation currents cannot yet be addressed by the 3D code due to the lack of drifts and to the ideal field and divertor geometry assumed in the simulation. In reality, the ten “identical” divertor units usually receive different heat and particle fluxes, as detected by the IR- and $H\alpha$-cameras, even under the action of the error-field compensation coils (trim coils). To facilitate a code-probe comparison under this circumstance, a modular averaging of the probe data is necessary, where the Jsat profiles should be aligned with the actual strike-lines estimated by the IR-camera and weighted according the relative $H\alpha$-intensities of all monitored modules. 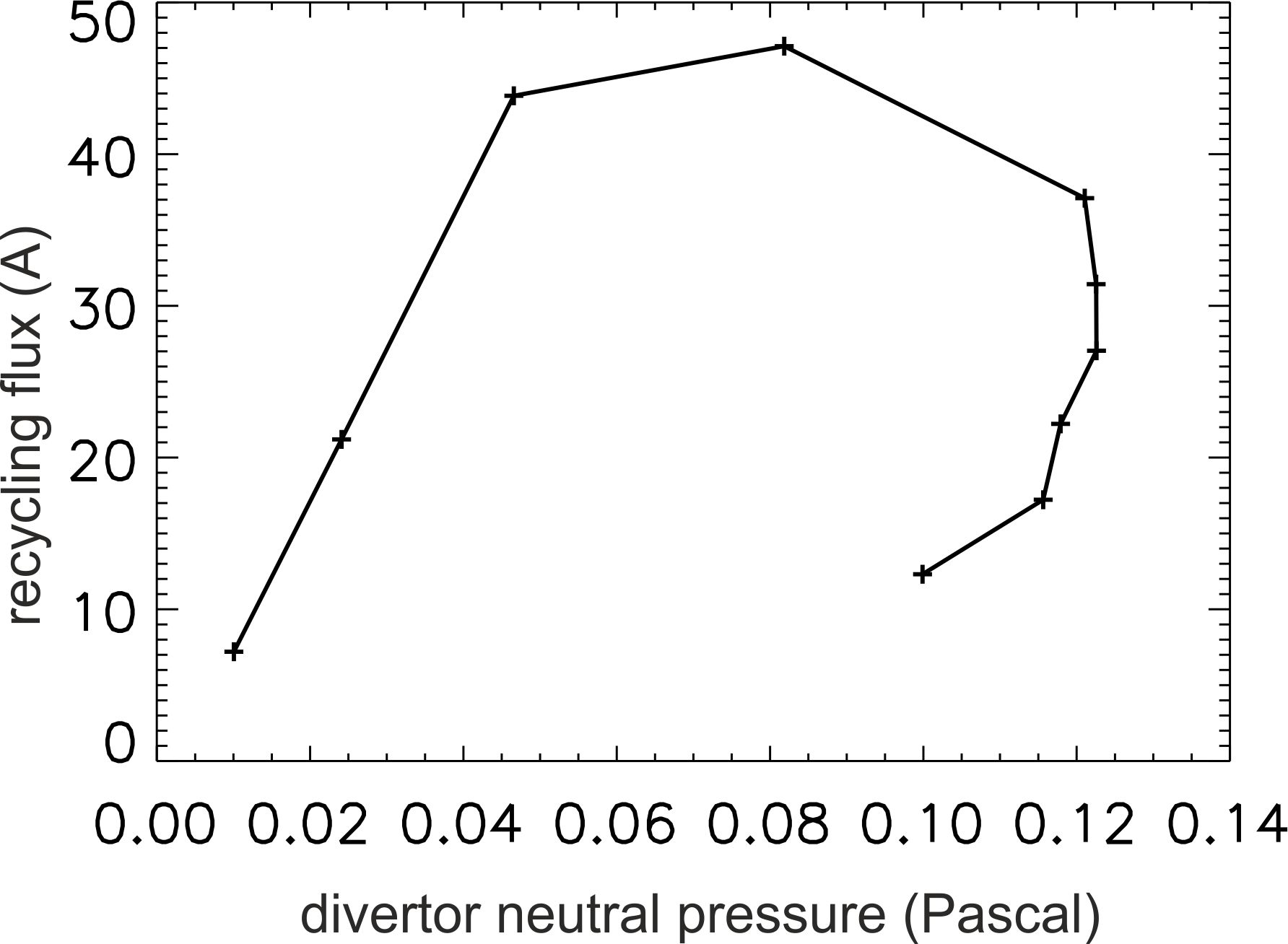 The neutral pressure is measured with pressure gauges installed in the divertor chamber and in the main chamber as well. In general, they are remote from the plasma, especially from the recycling zones, so that the recycling neutrals have undergone several atomic reactions before reaching the gauge positions. Thus, the measured neutral pressure is a combined result of neutral source and transport, which could be a complex function of the background plasma parameters in the island. Figure 2 shows the correlation of the divertor-chamber-averaged neutral pressure $p_{0,div}$ with the total recycling flux, resulting from the numerical density scan described above. The recycling flux first increases with $p_{0,div}$, and then decreases when the plasma detaches from the targets driven by carbon radiation. During the detachment, $p_{0,div}$ remains at a high level, while the recycling flux sharply drops due to enhanced radiation. In fact, this desirable compatibility of the W7-X divertor between particle and power exhaust has already been identified and well analyzed in previous predictive studies$^1$, which was also confirmed in recent divertor experiments$^2$. Unfortunately, the decoupling of $p_{0,div}$ from the recycling flux under detached conditions means that the recycling flux, which is of particular interest for the topic addressed in this paper, cannot be determined by the pressure gauges. 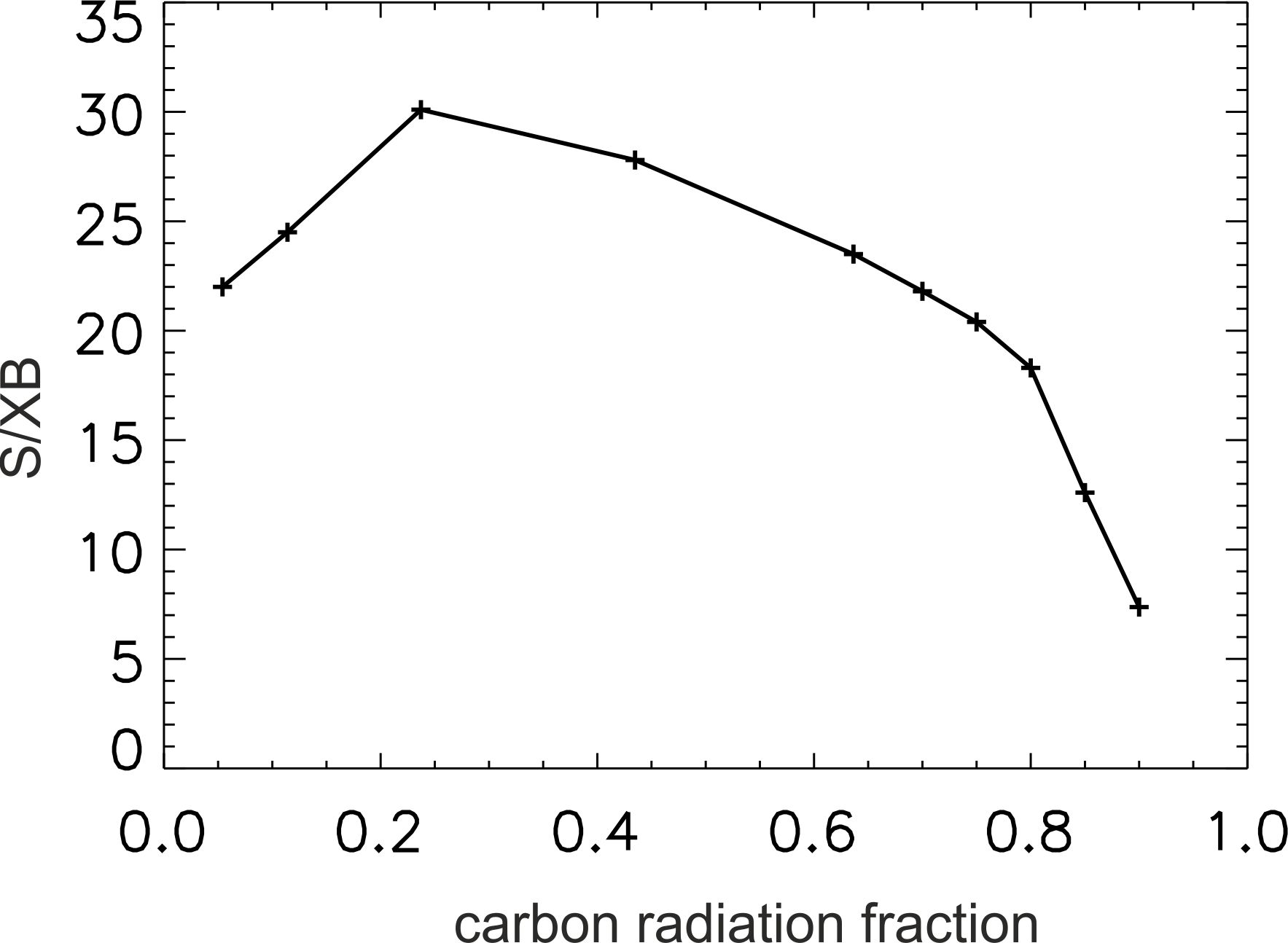 In W7-X the recycling neutrals are well monitored with $H\alpha$-cameras. Nevertheless, evaluation of the line-integrated $H\alpha$-signals requires the local S/XB value (the number of ionization events per photon – a quantity that depends on the electron temperature and the densities of elections, ions, atoms, molecules and molecular ions), which is difficult to access experimentally. Numerical simulations are indispensable. For this purpose, a synthetic $H\alpha$-diagnostic has been implemented in the EMC3-Eirene code. Figure 3 shows the preliminary code results of the volume-averaged S/XB ratio as a function of the carbon radiation fraction from the density scan mentioned above. The strong dependence of the S/XB ratio on the divertor plasma state demonstrates the necessity of 3D simulations for decomposing the $H\alpha$-signals measured at W7-X.