The divertor target is the most intense plasma-surface interaction area in tokamaks. Currently, the control of power load on the targets becomes to one of the most important issue for high performance long-pulse discharges. EAST has achieved over 100 s high performance operation, however, its lower graphite divertor prevents its achievement of further high-power long-pulse discharges $[1]$. Tungsten (W) has been chosen as the divertor plasma-facing materials (PFMs) for ITER $[2]$ and the main candidate for CFETR. To demonstrate the performance of W as the divertor target material for reactor and solve the power exhaust problem, the upgrade of EAST lower divertor into W material is undertaken. In this work, the physical design of the new EAST lower W divertor is presented. By using the 2D edge plasma code SOLPS modeling $[3][4]$, the new optimized divertor shape for the configuration is proposed. The erosion and W transport during the external impurity seeding has also been studied using the new divertor shape.

The SOLPS5.0 code is applied for the modeling. At the beginning, to confirm the optimized shape of the EAST lower divertor, the carbon divertor is assumed with the physical and chemical sputtering included and the constant radial transport coefficients are used. The systematic examination of different target shapes, target angles and the pump locations has been carried out. By comparing the horizontal target, vertical target, the strike point position, the horizontal target with the SP locating near the closed corner is proposed. The simulation result reveals that the divertor closure plays significant role in divertor plasma, while the target inclining angle influences plasma slightly. It is confirmed that the pump slot location has a remarkable impact on the particle exhaust, which influences the divertor plasma significantly. Higher pumping speed reduces the neutral density and radiated power, thus increases Te as well as the heat flux to the target, as shown in Fig. 1. For pumping at the SOL side, the particle removal rate is the essential physical quantity to the divertor particle dynamics. For a given particle removal rate, however, the plasma conditions are insensitive to the pump location within the scrape-off layer (SOL) side.

After the confirmation of the new divertor shape, the performance of the W divertor is further investigated. The divertor target material uses W material by considering the particle reflections $[5]$. To study the effect of external impurity seeding and the control of W impurity in the newly designed divertor, the performance of argon (Ar) and neon (Ne) seeding into the plasma, and the resulting W target erosion and its impurity transport is simulated by the SOLPS $[4]$ coupled DIVIMP modeling $[6]$. Two external impurity gas seeding positions are compared, i.e. puffing at scrape off layer (SOL) and private flux region (PFR). The puffing rate scan with argon has been done. The power crossing the core-edge interface (CEI) $P_{SOL}$ = 4 MW, $n_{D+}$ at CEI is fixed to $4.5 \times 10^{19} m^{-3}$ ($n_{e,sep}$ ~ $1.5 \times 10^{19} m^{-3}$). The simulation results indicate that seeding at scrape-off layer (SOL) side is better than seeding at private-flux region (PFR) by considering the divertor power dissipation and impurity screening as shown in Fig. 2. By comparing the Ne and Ar seeding, it is found that to achieve the similar divertor plasma condition, Ar seeding is better for divertor impurity screening as shown in Fig.3 the W impurity density at the core region. However, Ar may cause more serious W erosion, resulting in severe core contamination by W impurity. Our study indicates the erosion of W is still a critical problem during the Ar seeding, even with Te at the target below 10 eV. To reduce the target erosion and enrichment of W impurity in the core region, the deuterium gas puffing at upstream SOL region combined with external impurity seeding at divertor region is proposed. 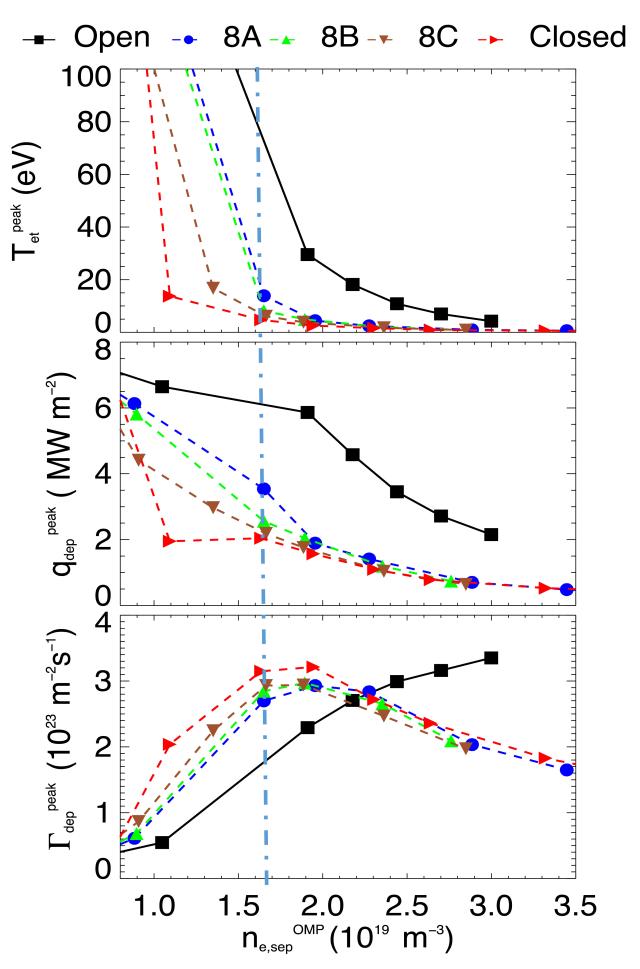 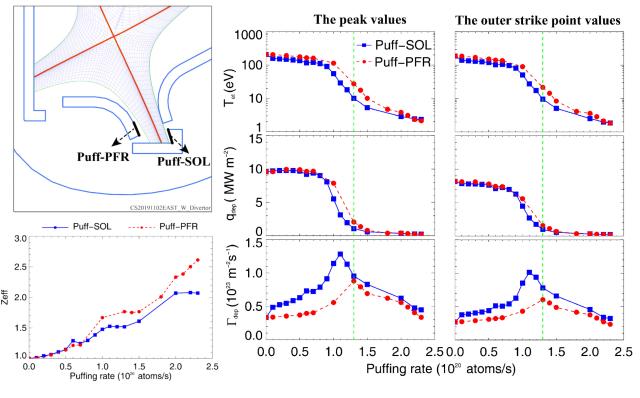 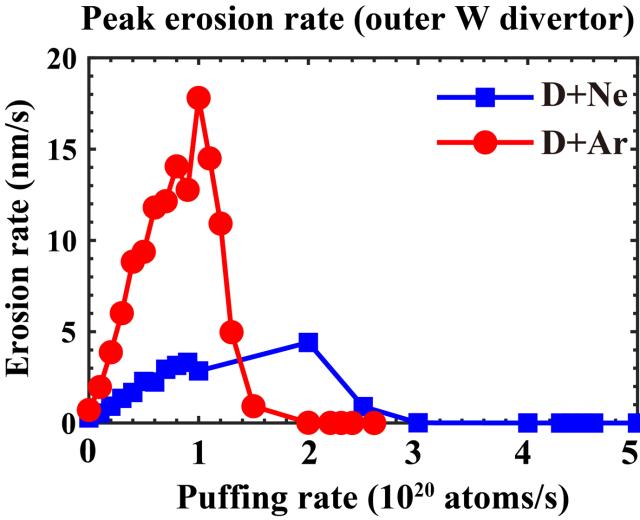