Numerical simulations by the integrated divertor code SONIC show that the screening effect on the seeded high-Z impurity in the SOL plasma is improved through the enhancement of plasma flow induced by additional low-Z impurity injection. A single impurity injection of Ar into a steady-state high-beta plasma of JT-60SA results in a high Ar density at the top of SOL plasma, leading to an increase of core Ar density. This issue can be solved with even a small Ne seeding, which reduces Ar density in the SOL and the core plasmas. This is mainly caused by the enhanced friction force due to the higher D$^+$ parallel flow towards the inner divertor, which is originated from the strong Ne radiation around X-point. We show that the line emission of Ne$^{7+}$ has a key role for the generation of higher D$^+$ parallel flow. 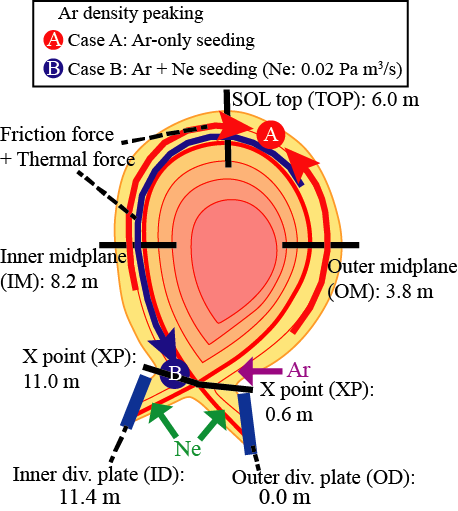 In order to obtain understanding of impurity transport processes and interactions between plasma and impurity, we have developed the integrated divertor code, SONIC $^1$. One of the unique features of SONIC is to compute the impurity transport processes kinetically, while most of other codes treats them fluidly. SONIC provides more precise impurity transport processes, e.g. ionization and recombination of impurities, a kinetic modelling of Coulomb collisions.
In this study, numerical simulations with SONIC on the JT-60SA steady-state high-beta plasma are discussed for the following two cases; Case A: Ar-only seeding (Ar seeding rate of 0.2 Pa m$^3$/s), and Case B: additional Ne injection (Ne seeding rate of 0.02 Pa m$^3$/s) to the Ar-only seeding plasma obtained in Case A. In both cases, intrinsic C sputtered from the first wall and the divetors is considered. The seeding locations of Ar and Ne (see Fig. 1), and the input power and particle flux from the core boundary are kept the same throughout the two cases. The simulations show that both Cases A and B result in partial detachment with a similar total impurity radiation power of ~13 MW. 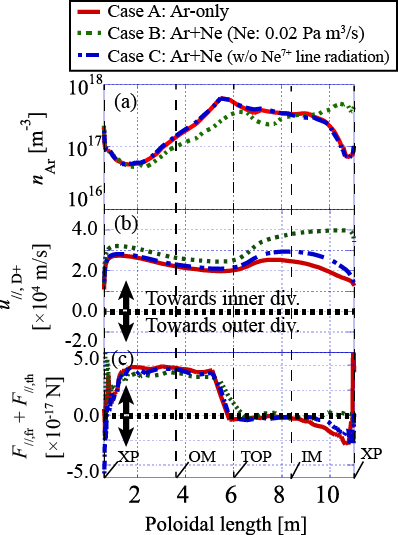 This result suggests that the line emission of Ne$^{7+}$ can be used as a knob to control the Ar impurity transport. Both the essential role of Ne$^{7+}$ and the smaller radiation power in the SOL due to low $n_{\rm{Ar}}$ found in Case B are consistent with the bolometric and the spectroscopic observations in Ar+Ne seeding experiment in JT-60U $^{2, 3}$. To our knowledge, this study with SONIC is the first to have shown the improved screening of the seeded high-Z impurity in the SOL plasma with additional low-Z impurity injection by the high SOL D$^+$ flow and resultant strong friction force by numerical simulations. This work provides a solution to avoid the Ar accumulation at the top of the SOL plasma, which is one of the biggest sources into the core Ar ions. This screening effect will be examined in the future JT-60SA experiment.