In the ADITYA-U tokamak 1, impurity seeding experiments were carried out to achieve transitions to radiative improved (RI) modes [2], which is usually characterized by the increased confinement along with increased plasma density, temperature and toroidal velocity shear profile as compared to the Ohmic mode. In this type of discharges, radiation from the edge region of the plasma is increased by a large fraction ( 50 %) by seeding the mid Z impurities, like neon and argon. The improved confinement in RI mode plasmas is believed to be related to the reduction of growth characteristics of the toroidal ion temperature gradient (ITG) mode due to the increase of plasma effective charge, Zeff. The suppression of turbulence through the increase of EB shear rotation in the impurity injected plasma [3] is another possible mechanism for improving the plasma properties in RI mode. In neon gas puffed discharges of ADITYA-U tokamak, it was observed that the reversal of toroidal rotation occurred at lower values of density as compared to the hydrogen puffed Ohmic discharges, indicating lower electron density threshold for toroidal rotation reversal with neon seeding. The radial profile of toroidal rotation in ADITYA-U tokamak has been systematically studied for both neon and argon gases seeding discharges to understand the mechanism responsible for lowering the threshold of density for rotation reversal to occur.

Impurities seeding experiments in ADITYA-U were carried by puffing the neon and argon gases in appropriate amount during the plasma current flat-top region using a gas fuelling system consists of piezo-electric valve and a programmable pulse generator. The puff duration, number of puffs and voltage applied to Piezo-electric valve were altered in the experiment to study the effect of amount and duration of gas injection on toroidal rotation. The impurities seeded plasmas of ADITYA-U tokamak [4] are characterized by the increase of line average electron density, ne and central electron temperature, Te(0), as measured by single channel microwave heterodyne interferometer and the soft X-ray diagnostics, respectively. Substantial change in plasma edge properties were observed with the increase of radiation as measured by AXUV detector and the reduction of hydrogen recycling illustrated by lower H signal monitored by optical fiber, interference filter and photo multiplier tube (PMT) based spectroscopic system. In these impurities seeded discharges, particle and energy confinement times were also increased significantly. These improved characteristics were initiated only after 10 to 15 ms of the gas injection depending upon the amount of gas injected into the plasma.

The radial profiles of toroidal rotation of the plasma, Ut, were thoroughly analysed for the discharges with neon and argon gases puffing. The toroidal rotation profile was measured by monitoring the Doppler-shifted passive charge exchange line emission at 529 nm from C5+ ion. This spatial profile of this spectral line was monitored using a high resolution spectroscopic diagnostics [5, 6] capable to obtain the spatial profile collecting the light simultaneously using seven lines of sight (LoS) with a spatial resolution of ~ 2.2 cm. To obtain the complete radial profile of rotation the light collection optics were placed inside a re-entrant tube mounted on a tangential port of ADITYA-U tokamak. The system was having a multi-track enabled 1.0 m long visible spectrometer and charge coupled device (CCD) with the reciprocal linear dispersion of ~ 0.0063 nm/pixel. The toroidal rotation radial profile was obtained by converting the spatial profile using ABEL-like matrix inversion technique. As shown in figure 1, the plasma core was observed to be rotating in the toroidal direction with a velocity of ~12 km.s−1 for a typical neon seeded discharge of ADITYA-U tokamak and the direction of rotation was in the co-current direction whereas the plasma rotates in the counter-current direction in the edge region. The reversal of the toroidal rotation profiles are analyzed by scanning ne for the impurities seeded discharges and results are compared with Ohmic discharges with hydrogen gas puff. It has been observed that the density threshold for rotation reversal can be brought down using impurity seeding in the ADITYA-U plasmas. Most importantly, the modification in the rotation is not accompanied by usually observed turbulence reduction in the plasma edge as no change in fluctuation in the ion saturation current is detected in the ADITYA-U tokamak's impurities seeding plasmas. 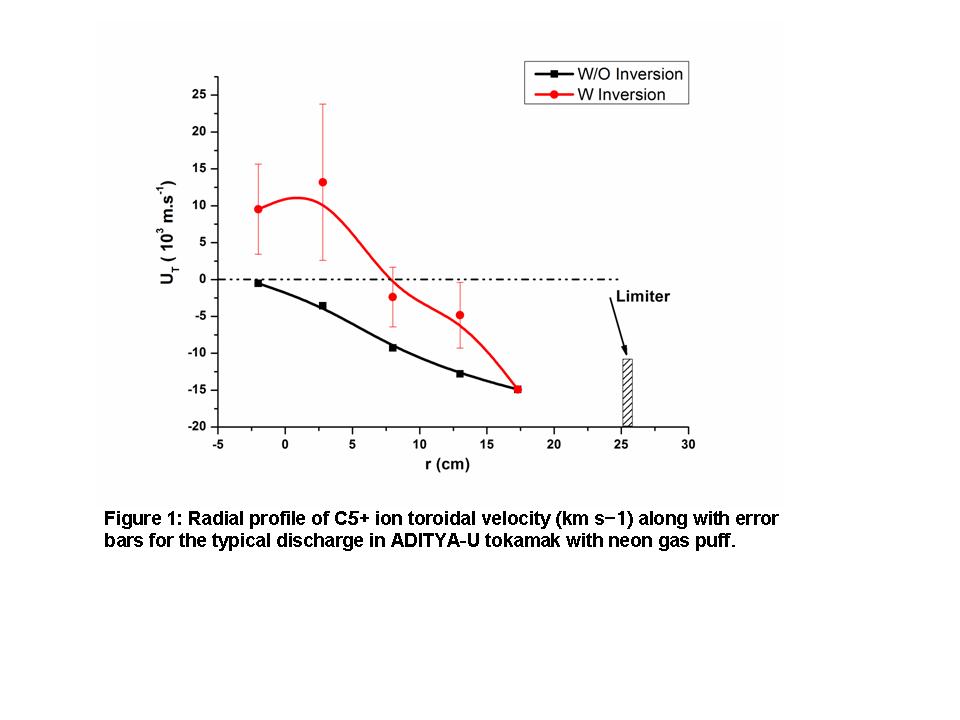