Present and future long-pulse tokamaks such as JT60-SA, ITER and DEMO will require increasingly advanced control methods to maximize the plasma performance and pulse duration while avoiding plasma disruptions. Given the cost and complexity of a single discharge, maximal use of automated approaches is strongly preferred above costly and error-prone trial-and-error discharge development approaches. In addition to continuous plasma control functions such as position, shape and kinetic (density, temperature) control and profile control (e.g. current density), also off-normal events, including (but not limited to) those that may lead to a disruption, need to be detected and handled in an automated way. At the same time, all these control tasks should be handled with a minimal set of actuators and diagnostics. For this purpose, a sophisticated set of plasma reconstruction, monitoring, supervision and control algorithms will be required. In this work we present the design, implementation, and integrated experimental application of multiple key elements of these advanced plasma control systems on TCV and ASDEX Upgrade.

On both ASDEX Upgrade and TCV, a model-based plasma state reconstruction system has been developed that combines real-time models for the profile evolution, including real-time source calculations for EC and NBI actuators [1], [2], with real-time diagnostic measurements. On TCV, real-time model-based plasma profile estimations have been coupled to equilibrium calculations, yielding for the first time a real-time ‘kinetic’ plasma equilibrium reconstruction with realistic pressure and current density profiles [3]. On ASDEX Upgrade, an improved real-time density profile estimation algorithm has been deployed, merging several diagnostics to provide reliable estimates also in situations where key diagnostic systems are compromised – for example in the case of loss of interferometer measurements during ICRH injection.

In addition, on TCV, a novel framework for real-time control including off-normal event handling has been designed, implemented and experimentally tested [4,5]. The system, as shown in the figure, consists of two layers: a tokamak-specific interface layer and a tokamak-independent task layer. The interface layer translates the tokamak-specific diagnostic and actuator signals into tokamak-independent, general descriptions of the state of the plasma and the tokamak. This allows control tasks to be handled by the ‘task-layer’, in a way that is general and portable across tokamaks. The task layer contains a plasma state/event monitor, which categorizes the state and events (if any) and sends this information to the supervisory controller. This supervisory controller generates, based on user-set rules, a prioritized list of control tasks that should be performed to respond to the present conditions of the plasma. An actuator manager then assesses the list of prioritized tasks and decides which tasks can be fulfilled with the presently available set of actuators, based on resource requests from a set of controllers handling each task. This system is capable of handling an arbitrary chain of events with an appropriate response depending on the severity of the event – with a response ranging from changing control references, re-allocation of actuators, or shutting down the discharge. The framework is generic and designed to be tokamak-independent, therefore it can readily be ported to other tokamaks. 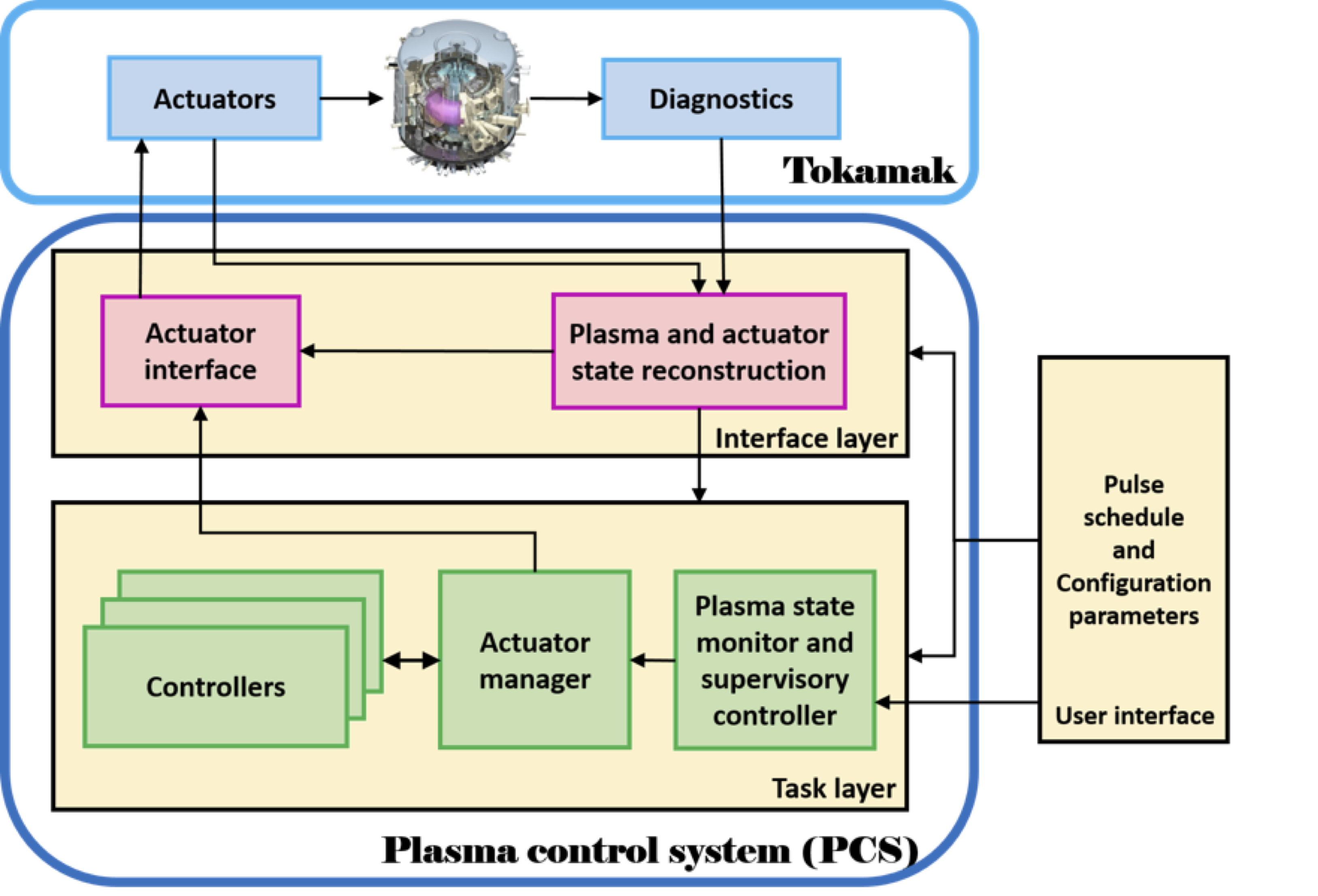 This new control framework has been tested in numerous experiments on TCV. A first example demonstrated real-time re-assignment of ECRH actuators from q-profile and beta control to Neoclassical Tearing Mode (NTM) control in response to the appearance of the mode [5]. More recently, this control framework has been used for avoiding high-density limit disruptions: monitoring the distance from a threshold (experimentally determined in the 2D space of H98 and normalized edge density), the heating power and gas injection were controlled to remain at a safe distance from the disruptive limit. The disruption boundary and algorithm used is identical to one previously implemented on ASDEX Upgrade [6], proving the portability and generality of the approach. Work is ongoing to include real-time handling of other well-understood chains of events that can lead to disruptions, such as radiative peaking.

This generic control framework naturally supports more intelligent control, notably making tokamak control problems resource-aware. For example, intelligent NTM controllers that use real-time simulations of the Modified Rutherford Equation to predict the power required for stabilizing an NTM have been tested in simulation [7]. With knowledge of the resources required for the NTM stabilization (and other tasks), the supervisory controller has the ability to decide that a disruption can not be avoided (for example due to saturation of suitable actuators, or unexpected evolution of plasma quantities). The supervisor can then trigger further measures such as plasma ramp-down or triggering of a disruption mitigation system. By handling events that can be treated with conventional means, while flagging those that can not, this advanced plasma control system acts as a first line of defense to avoid unnecessary triggering of mitigating actions – which will be a crucial element of control for long-pulse tokamaks and fusion reactors.

While real-time control will be essential for future reactors, some quantities remain difficult to measure or control in real-time. For these quantities, it is important to be able to rapidly optimize the feedforward actuator references from shot to shot, to minimize trial-and-error and save experimental time. We report on new experiments on ASDEX Upgrade for automated shot-to-shot optimization of the plasma temperature, using the Iterative Learning Control (ILC) method, using a model of the response of the plasma temperature to the heating actuators to compute a correction to the commands of the heating systems. These experiments benefit from a newly developed system for actuator management for ASDEX Upgrade allowing several heating actuators to be used for the same control task [8]. This is particularly useful when replacing actuators that may fail during a discharge with other actuators that can fulfil a similar role.

Acknowledgements
This work has been carried out within the framework of the EUROfusion Consortium and has received funding from the Euratom research and training programme 2014-2018 and 2019-2020 under grant agreement No 633053. The views and opinions expressed herein do not necessarily reflect those of the European Commission. This work is supported in part by the Swiss National Science Foundation