Tungsten (W) and tungsten based alloys are candidate materials for plasma-facing components (PFCs) in future fusion reactors, largely due to their low erosion yield by physical sputtering and low retention of plasma fuel in them. The present work concentrates on erosion results obtained from two European tokamaks, ASDEX Upgrade (AUG) and WEST, which have operated with full-W first walls since 2007 and 2017, respectively. In particular, we elucidate the erosion behaviour of W PFCs during representative AUG plasma discharges, identify how various material and plasma parameters affect them, and determine the balance between their gross and net erosion, i.e., how material is migrating and re-depositing on the vessel. Results for W erosion during recent experimental campaigns on WEST are also presented for comparison.

Extensive sets of results are available on campaign-integrated erosion processes as well as on W sources in the different regions of the AUG torus [1, 2]. However, only recently the focus of the studies has shifted towards understanding erosion and re-deposition behavior during individual plasma discharges. This way, it has become possible to benchmark predictive simulations of W migration in the edge plasma. Our strategy has been exposing different sets of marker samples, mounted at the low-field side (outer) divertor region of AUG, to a pre-determined number of plasma discharges and modelling the obtained erosion and re-deposition profiles using the simulation codes ERO, SOLPS, and DIVIMP. The main research lines have been clarifying how the observed erosion patterns are influenced by the type of the plasma discharge (L-mode vs. H-mode) including transient phenomena like ELMs, by the plasma gas (deuterium (D) vs. helium (He)), and by the material and morphology of the PFCs. Most of the results are obtained by using gold (Au) or molybdenum (Mo) as proxies for W to eliminate the contribution of material influx from other regions of the torus; Indeed, even though Au, Mo, and W have different erosion yields, they exhibit comparable ionization and migration lengths. The physics picture is supplemented by the analyses of the W erosion profiles of WEST marker tiles, removed from the vessel after the recent completion of its phase I operations, and comparison to the existing W erosion data from JET [3].

To obtain measurable erosion rates, the AUG plasma scenarios have been designed to exhibit high electron temperatures up to Te=20-25 eV in the divertor plasma. In L-mode discharges, both net and gross erosion typically peak around the outer strike point, roughly following the shape of the Te profile. In the strike-point region, the gross erosion of the markers is 3-4 times larger than their net erosion while at a distance of a few cm from the most affected region, the net erosion rapidly decreases, even turning into net deposition [4]. In addition, the eroded particles are locally re-deposited in the immediate vicinity of their origin [5]. We estimate that the net/gross erosion ratio is always less than 50% in AUG L-mode plasmas. According to ERO simulations, this ratio systematically decreases as the Te drops or the plasma density increases [5].

In H-mode discharges with inter-ELM conditions similar to those in the L-mode, gross erosion during ELMs is 1-2 orders of magnitude higher than in between ELMs [6]. The overall contribution of ELMs on the W source is estimated to be >50% [1], while net erosion is enhanced by a factor of 2-3 [6], see Figure 1. Compared to L-mode data, re-deposits are observed at distances of several cm from the studied marker structures and, according to Figure 2, in the direction magnetically downstream of the markers, erosion can be highly reduced or completely eliminated. 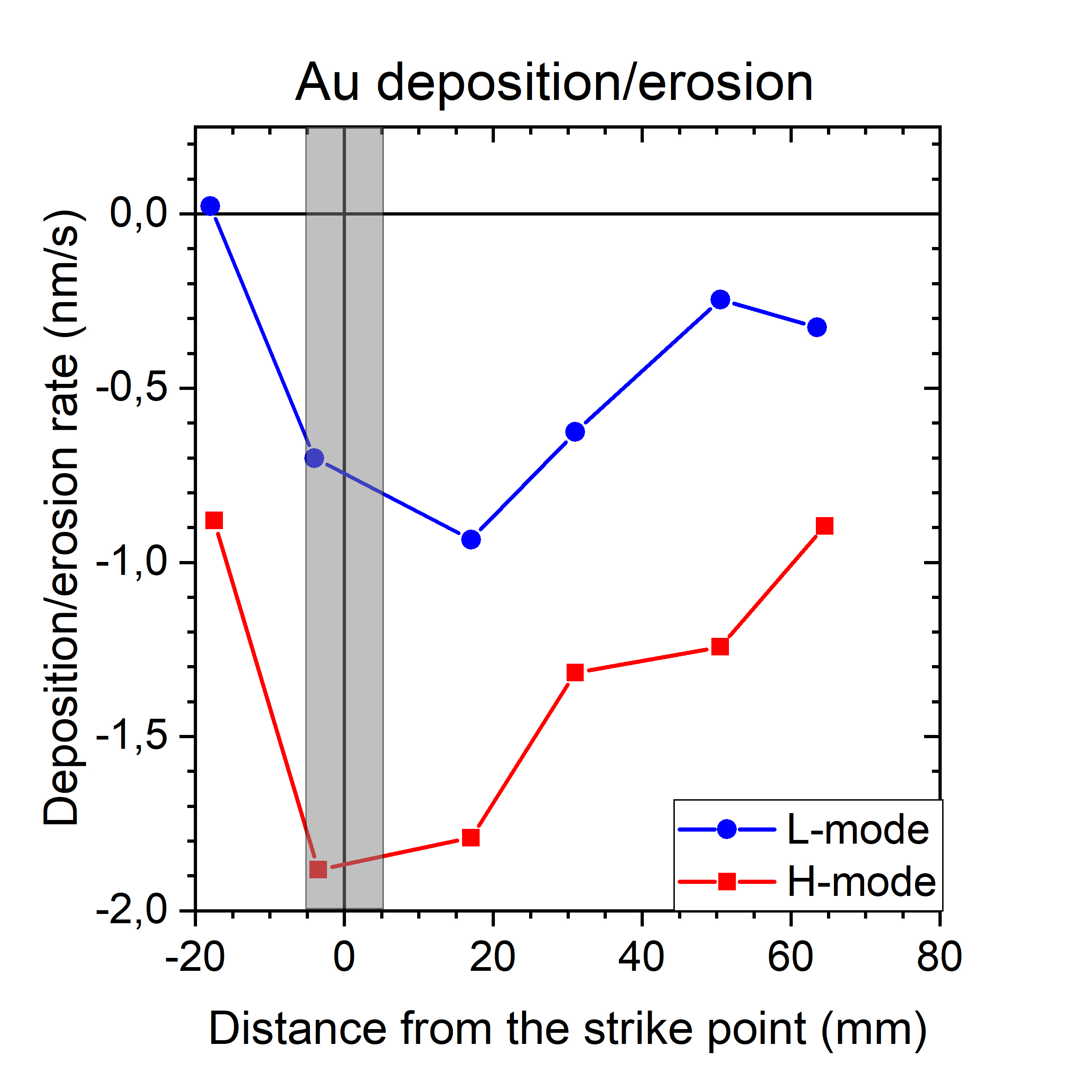 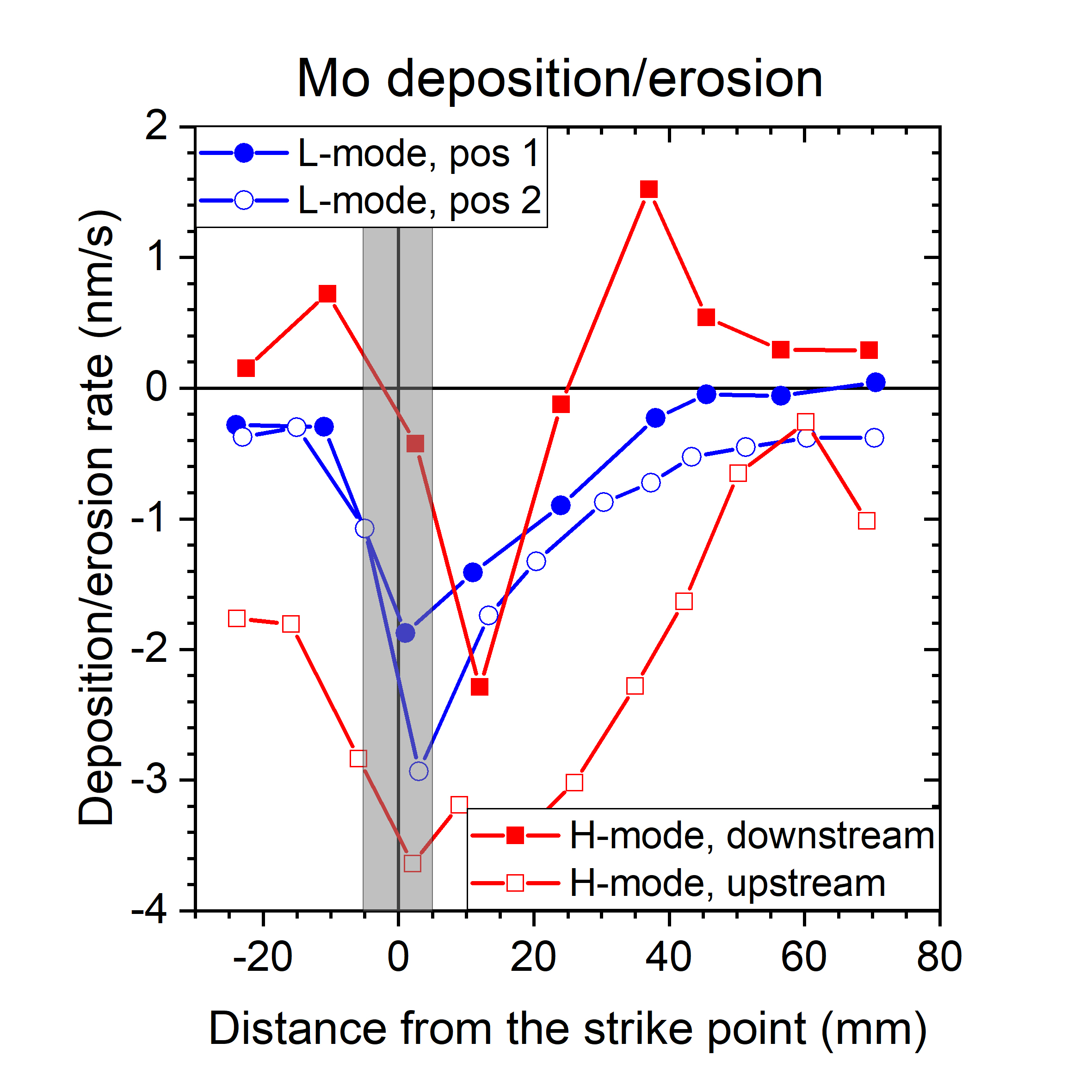 In the absence of ELMs, ERO simulations predict impurities to have the largest effect on net erosion in regions where Te drops to values below 20 eV. However, without any impurities, erosion would be almost two orders of magnitude lower. The simulated erosion profile is typically more peaked than the experimental one and it exhibits a toroidal tail of re-deposited particles downstream of the markers. However, the particle density remains below the experimental detection threshold [5]. Flow of particles along the field lines as well as poloidal transport and diffusion across the field lines, driven by the E×B drift, are found to be important ingredients in explaining the measured erosion profiles [7].

In He plasmas, W erosion is intensified by the large mass and charge of the plasma species. Additionally, in the experiments discussed here the applied ion cyclotron resonance heating schemes can result in large influx of material from the main chamber to the divertor, leading to all the marker samples being covered with deposited layers [8]. When the extra W source is eliminated and the amount of impurities minimized, net erosion in He can be estimated to be 5-10 times larger than in comparable D plasmas.

Surface roughness reduces erosion by a factor of 5-10 and even turns net erosion into net deposition for roughness >1000 nm [9], see Figure 3. This happens mostly in areas where the E×B drift plays a significant role. Local net erosion of W appears to follow the surface topography: in shadowed areas W re-deposition dominates while for plasma-exposed regions erosion is uniform at length scales much larger than the different surface features. One therefore needs to carefully consider the surface features and their evolution during plasma operations to obtain a reliable estimate for gross/net erosion balance. 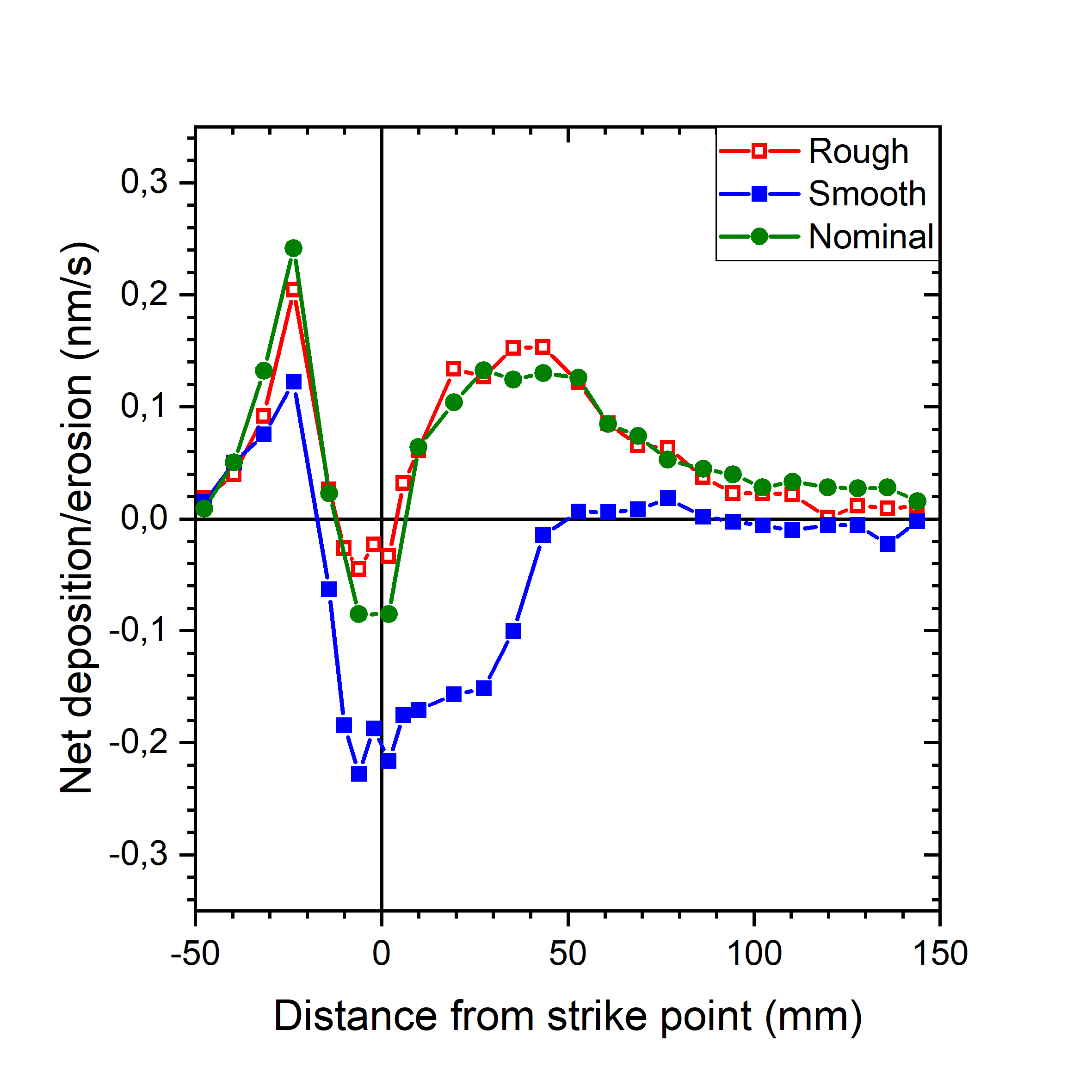