Control and/or mitigation of runaway electrons (REs) is necessary for the operation of larger fusion devices including ITER 1. The disruption generated REs, in particular, pose a serious threat for the plasma facing components in ITER as they are predicted to acquire very energy (~ tens of MeV). Many RE mitigation mechanisms like Massive Gas Injection (MGI) 2 and Resonant Magnetic Perturbations (RMPs) 3 are proposed and demonstrated in various tokamaks like DIII-D, JET, Tore Supra for mitigating the REs. However, the success of each method is limited and the search is on for a robust mechanism of RE mitigation. Due to lower values of plasma current, smaller tokamaks generally do not observe disruption generated REs, which limits the exploration of mitigation techniques. In order to confine the REs after the end of the discharge, i.e., the termination of plasma current, a novel method is attempted in a mid-size tokamak ADITYA-U. In this paper experimental observations of confinement of runaway electrons using an electrostatic field induced by biasing an electrode placed in the edge of ADITYA-U tokamak is presented. The REs are kept confined even after the termination of discharge current, which can very well be utilized for testing several RE mitigation techniques in smaller tokamaks where the disruption does not generate substantial RE population.

The experiment is performed in ADITYA-U tokamak, a medium sized, air-core tokamak with R = 0.75 m and a=0.25 m. The experiment is carried out with B_T = 1.0 - 1.3 T. The typical value of plasma current is I_p=80-160 kA and plasma duration is ~ 80-330 ms. The line averaged central density is n_e ~ 1-4 10^{19} m^{-3}. A radial electric field can be induced inside the plasma by biasing an electrode placed inside the last closed flux surface (LCFS) [8]. In ADITYA-U tokamak, the electrode bias setup initially consisted of a double bellow assembly capable of translating a molybdenum electrode of 5 mm diameter inside the LCFS as well as varying its exposed length. It was later changed to a single bellow assembly containing an 8 mm tungsten electrode having an exposed length of 14 mm which can be translated inside the LCFS. A 450 V, 60 mF capacitor based biasing power supply is developed which can bias the electrode in multiple pulses employing an Insulated Gate Bipolar Transistor (IGBT) as a switch. For the purpose of this experiment, the electrode is placed 2.5 cm inside the LCFS and it is biased just before the disruption of the plasma. The typical waveform of voltage and bias current is shown in Fig 1. The REs are routinely observed in ADITYA-U tokamak for low density discharges. They are diagnosed with a 3 inch NaI (Tl) lead shielded scintillator detector coupled with a photo-multiplier tube (PMT), which is collimated to observe the Hard X-rays (HXR) produced when the REs interact with the limiter. 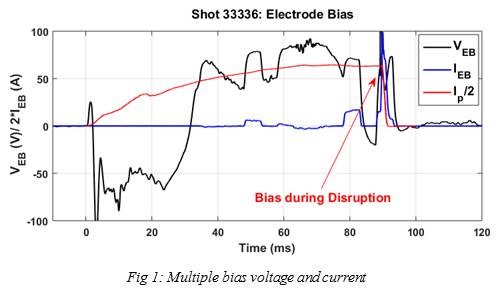 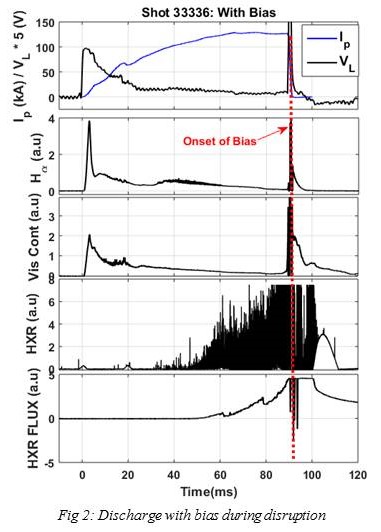 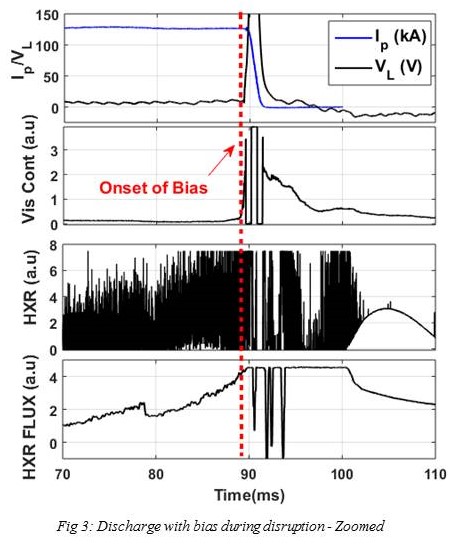 Figure 1 shows the multiple pulses of biasing applied to the electrode placed 2.5 cm inside the LCFS for the shot 33336. A biasing voltage of ~ 80 V draws typically ~ 20-30 A bias current depending on the plasma properties. The last pulse of biasing coincides with the plasma disruption as shown in figure 1. The plasma parameters for this shot are shown in figure 2. Figure 2a) represents the plasma current and loop voltage, 2b) shows the Hα signal, 2c) indicates the visible continuum, 2d) shows the HXR signal and plot 2e) shows the HXR flux. It can be seen clearly that in presence of biasing during the disruption, the HXR intensity as well as HXR flux persists for ~10 ms even after the termination of the plasma discharge as opposed to the case with no biasing. The visible continuum signal also persists after the plasma disruption. The zoomed picture is shown in figure 3. The observation has been repeated for various values of electrode bias voltages and currents.

To obtain good insight into this new high confinement RE mode found in ADITYA-U Tokamak, a 2D, free boundary-like equilibrium is constructed for ADITYA-U tokamak profiles and parameters, which self-consistently solves a plasma plus an electron beam equilibrium using a newly developed mesh-free Grad-Shafranov solver [4]. Numerical results thus obtained support the idea that RE beam can attain a quasi-static equilibrium for a wide range of IRE/Ip, qualitatively supporting the experimental findings.

The disruption generated REs are not observed in ADITYA-U tokamak due to low plasma currents (< 200 kA) and stored energy (~ 2 kJ). The REs thus produced during the plasma discharge are generally lost as soon as plasma disrupts. Hence, the new observation suggests that the REs are confined with the help of electrode biasing even after the end of plasma discharge. The confinement of REs seems to be the result of the E_r×B_φ motion induced by the radial electric field. This result can be exploited to confine the REs for sufficiently longer times in smaller tokamaks for testing innovative concepts along with conventional mechanisms of MGI or RMPs for their effective mitigation.