As the planned JET DT campaign [1] draws nearer, the necessity of high quality data, especially kinetic data, is more apparent than ever. This is especially the case of ion temperature data, which have required substantial work to overcome the diagnostic difficulties encountered in the early years of the JET ITER Like Wall (ILW) project, due to reduced light impurity levels and the presence of unwelcome tungsten lines in the light impurity charge exchange spectra (CXS) used for ion temperature and toroidal rotation measurements. Ion temperatures are usually determined from one of more impurities, rather than from the hydrogenic species, although measurements using the hydrogenic species have also been developed [2]. This paper shows how an analysis of the ion (fuel and impurities) power balance (PB) has helped to overcome these issues [3]. Such an analysis is in fact necessary for high power density discharges in which the temperature difference between different ion species can approach 10%, thereby impacting fusion yield calculations.
Temperature differences between species depend on conditions such as heating power to the different species and collisionality, with temperature differences between species limited by inter-species thermal equipartition and transport. In its simplest application, a PB calculation allows the determination of the the maximum sustainable temperature difference between ions and electrons, |Ti-Te|, thereby allowing to reject grossly erroneous measurements. A PB analysis is also required for estimating the errors of the ion and electron heat fluxes prior to any species-resolved transport analysis. The ion-ion temperature differences arise from the fact that collisional heating scales as Z2/A, but is heavily mitigated by strong inter-ion equipartition. Differences are usually found to be small (a few %), however, they can approach 10% in low to moderate density, high power discharges, such the ones under development for the JET DT campaign [1]. In fig.1 we show for several impurity species the local ratio Tz/Ti as a function of Qi/Q110, where Qi is the net ion heat flux in the main (deuterium) species and the normalisation is to Q110 which is a fictituous collisional equipartition power (equipartitionality) defined as , where ceq=3.2610-32 W eV1/2 m3, L11 is the Coulomb logarithm for hydrogen-hydrogen collisions, ni the density of species i and the integral extends from the magnetic axis to the flux surface under consideration. The most important assumption underlying this analysis is that the heat transport coefficients ci and cz be equal. In the JET core plasma of the highest power discharges Qi/Q100 >0.1, i.e. Tz/TD>1.05 for non-hydrogenic impurity species. In such cases the underlying temperature needs to be corrected using the PB analysis, rather than be assumed to be equal to the measured impurity temperature. We also note that for A>7, Tz/Ti is essentially species-independent. This is convenient, because measurements from several impurity species can be combined into a single composite profile without any PB corrections. Fig.1 is for trace impurity concentrations, however iterative calculations show that Tz/Ti decrease only weakly for Znz/nD up to 0.3, which is well above typical values. 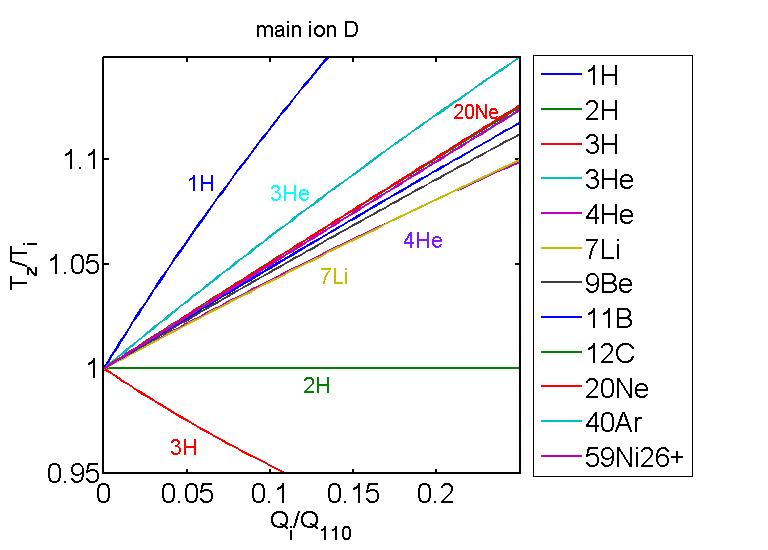 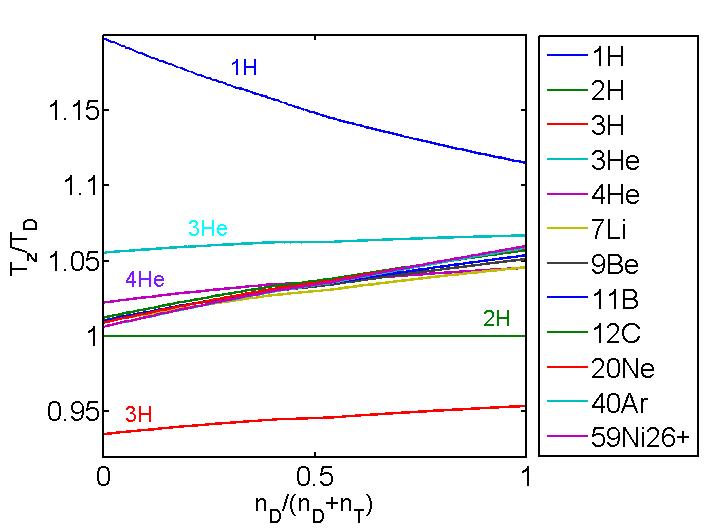 Finally, this analysis lead to a method for the reconstruction ion temperature profiles from ion temperature data available at only one or a small number of spatial locations [3]. We noticed that the equipartition power Qie is a nearly constant fraction, radially, of the deposited power Qis as calculated by heating codes. The actual values vary between discharge types and and are typically in the region 0.07-0.3 for discharges with dominant ion heating. A single measurement, such as the one provided for the plasma core by a 59Ni26+ K-shell at X-ray line at 1.6Å, measured with a crystal spectrometer, is sufficient to determine the value of Qie/Qis, providing, together with the PB analysis, acceptable impurity and main ion temperature profile when no CXS measurements are available.