JET has addressed one of the key issues for the baseline scenario in ITER by demonstrating for the first time a high-performance H-mode with high confinement using a neon (Ne)-seeded radiative divertor. Although the ITER Tritium plant is being designed to deal with both nitrogen (N) and Ne, the use of N leads to the formation of tritium-containing ammonia 1. Its accumulation in the ITER divertor cryopumps will require a more time-costly high temperature regeneration and will reduce the plant duty cycle 1. On the other hand, on current devices with all-metal plasma-facing components, N generally provides the best performance with respect to a carbon dominated environment. It would be beneficial for ITER to use Ne for divertor radiation and plasma boundary simulations for ITER show that this should be equally possible with N and Ne 1. Experimental results on the full-tungsten ASDEX Upgrade, and up to now on JET, had always found insufficient compression of Ne to allow simultaneous divertor power load control and sufficiently low pedestal plasma degradation. It had been expected that the larger physical size of JET in comparison to ASDEX Upgrade would improve matters regarding this compression, allowing JET to approach more closely the situation on ITER. Now, new experiments at JET with a higher input power (30MW) have finally yielded a Ne-seeded scenario (Fig. 1) which behaves similarly to the high-performance seeded H-modes previously only achievable with N impurity. 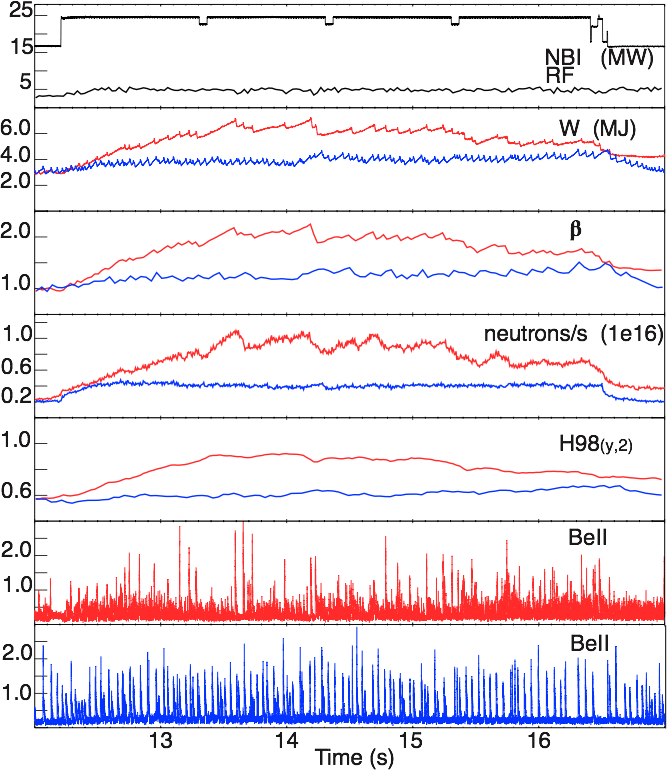 Stationary Type I ELMy H-modes have been obtained with Ip=2.5 MA, $B_T$=2.7 T, $P_{NBI}$=25 MW,$P_{RF}$=5 MW, at high triangularity ($\delta$ =0.4) with an ITER-like divertor configuration with both inner and outer strike points on the vertical divertor target plates 2. These plasmas are a significant step towards the ITER requirements, achieving a confinement factor $H_{98(y,2)}$~0.9, normalised pressure of $\beta_N$~2.0, Greenwald fraction of $\langle n \rangle$/ $n_{GW}$~0.94, an effective charge of $Z_{eff}$~2.0, radiation fraction of $f_{rad}$~0.5, energy confinement time of $\tau_E$=200ms with low power deposition on the W divertor. The ELM size is ~4-7% of the stored energy. Compared with their N-seeded counterpart discharges 2, these Ne-seeded plasmas require 10 MW more input power to obtain the same improved pedestal pressure. In addition, whilst the N-seeded discharges have natural ELMs with $f_{ELM}$ ~ 45 Hz (with ELM size of 4% of the stored energy), in the case of Ne, the ELMs are irregular at approximately 7Hz frequency, with smaller fluctuations in the inter-ELM period (Fig. 1). 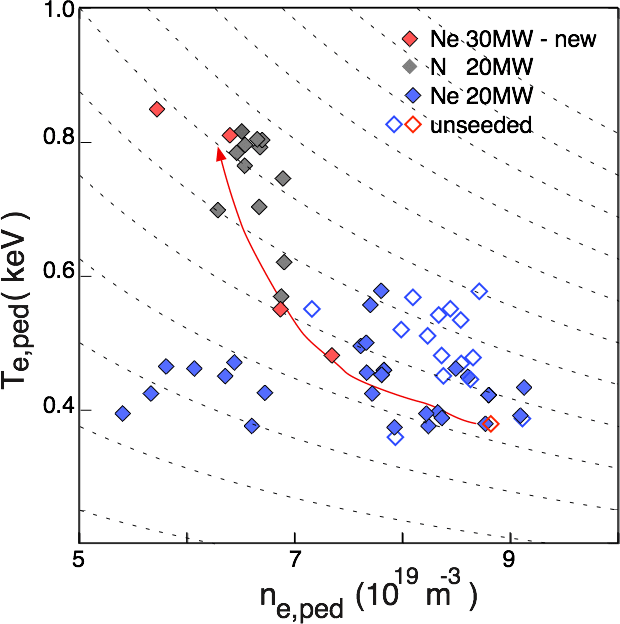 At high enough input power and seeding rate (the latter being required for sufficient divertor power load reduction), the key to obtaining significant confinement is the improvement of the pedestal pressure (Fig.2), as was observed with N-seeding 2. The mechanism(s) leading to an increase in pedestal pressure and temperature at JET are still being actively investigated for Ne, N and even C. In the new high-performance Ne-seeded discharges, the radiation distribution remains more centred on the X-point region than for the N-seeded cases 2. However, some of the features found with improved N-seeded plasmas 2 are also observed with respect to the unseeded case: unchanged position of the pedestal density and width, whilst the pedestal temperature width increases by ~40% in poloidal flux; the separatrix density remains constant; the relative distance between the pedestal density and temperature increases from 1.6% to 2.5% of the poloidal flux.

Apart from their importance in terms of ITER baseline demonstration with relevant divertor geometry and plasma-facing materials, a key contribution of these seeded plasmas is to provide a well-diagnosed set of target discharges for plasma boundary simulations. Such simulations, performed with the SOLPS code suite, are the basis for the ITER divertor design and fuel cycle 1. If the JET results for N and Ne can be matched, this significantly increases the confidence in the ITER divertor design basis and will confirm that Ne can be deployed as a seed gas in ITER. The experimental programme leading to these high-performance seeding results has been accompanied from planning to execution by an extensive modelling effort 3 using the SOLPS-ITER code. Scans have been made for these JET discharges with both N and Ne, with fluid drifts activated, and including upstream cross-field transport profiles adjusted to reproduce the H-mode pedestal profiles and the measured near-SOL heat flux channel width. Starting with lower input power cases, for which data where initially available, fair agreement has been obtained between code and experiment regarding divertor target profiles and radiation distributions. At higher input power, corresponding to the new discharges reported here, code runs are underway, and results will be reported at the conference.

JET has thus now demonstrated for the first time that Ne seeding is compatible with good confinement and power load control in an all metal environment. This is an important step towards improving confidence in the scientific basis for high power seeded operation in ITER, as well as providing a route to demonstrate an integrated scenario in JET-DT.

Acknowledgements. This work has been carried out within the framework of the EUROfusion Consortium and has received funding from the Euratom research and training programme 2014-2018 and 2019-2020 under grant agreement No 633053. The views and opinions expressed herein do not necessarily reflect those of the European Commission or of the ITER Organization
References: 1 R.A. Pitts et al, Nuclear Materials and Energy 20 (2019) 100696 2 C. Giroud et al., Plasma Phys. Control. Fusion 57 (2015) 035004 3 E. Kaveeva et al, PSI 2020.