Core density profile peaking and particle transport have been recently extensively studied on several tokamaks [1,2,3]. In JET, the earlier research of the significance of the NBI fueling on density peaking 4 was recently confirmed when thanks to the development of the gas puff modulation technique it was found that in ITG dominated plasmas, NBI is responsible for typically half of the density peaking 1. Here we aim to quantify the role of NBI fueling in contributing to density peaking in JET by executing identity discharges between the ICRH and NBI heated plasmas. By performing dimensionally matched identity plasmas, we can also learn how the different heating systems affect plasma confinement, MHD, impurities, radiation, pedestal, ELMs, the effect of rotation on transport and gas puff modulation properties.

Up to 15s H-mode plasmas with 8MW of ICRH power were executed on JET, with the JET record high injected ICRH energy of 108MJ. The ICRH discharges, using the H minority heating scheme at 3% minority concentration, were stationary without any major MHD activities or impurity accumulation. NBI heated discharges were executed consecutively to match the dimensionless plasma profiles of q, ρ, υ, βn and Ti/Te using the same shape. Both pulses had gas puff modulation at 3Hz throughout the discharges to extract perturbative particle transport coefficients. The ELM frequencies are 75Hz and 40Hz for the ICRH and NBI pulses, respectively, with mixed ELMs and affected by the gas puff modulation.

The time traces of the key parameters for the two discharges are shown in figure 1 and the main dimensionless and dimensional profiles are compared in figure 2. The dimensionless profiles of q, ρ, υ, βn and Ti/Te≈1 were matched within 5% difference except in the central part of the plasma (ρtor<0.3). The most significant difference, in addition to rotation or Mach number (see table 1), is the density profile which is ~50% more peaked for the NBI discharge than for the ICRH peaked discharge. Although the dimensionless profiles are well matched, there are other differences between the discharges that could modify the density profile and particle transport, in addition to the obvious influence of the NBI fueling to explain the increase in density peaking 1. 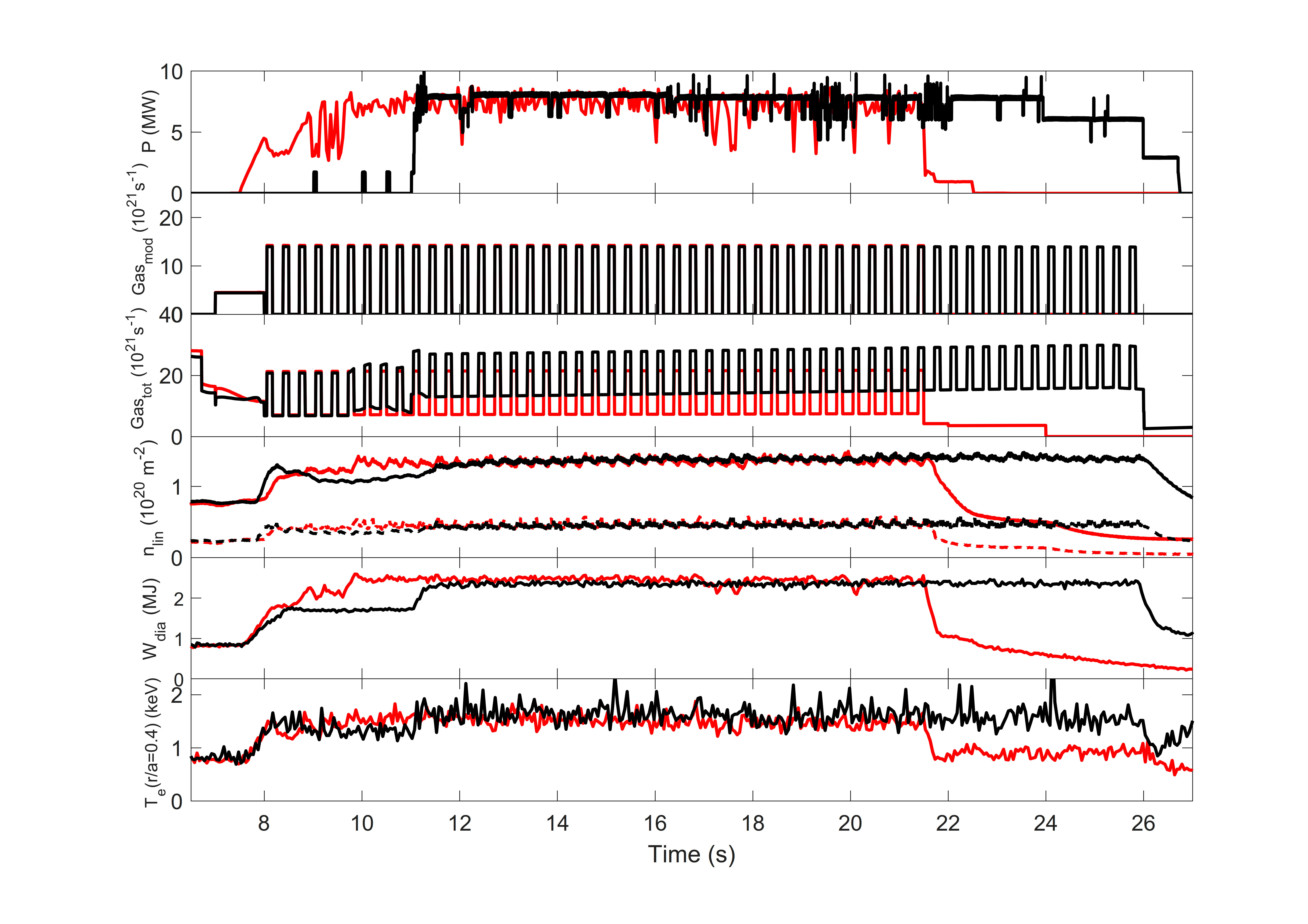 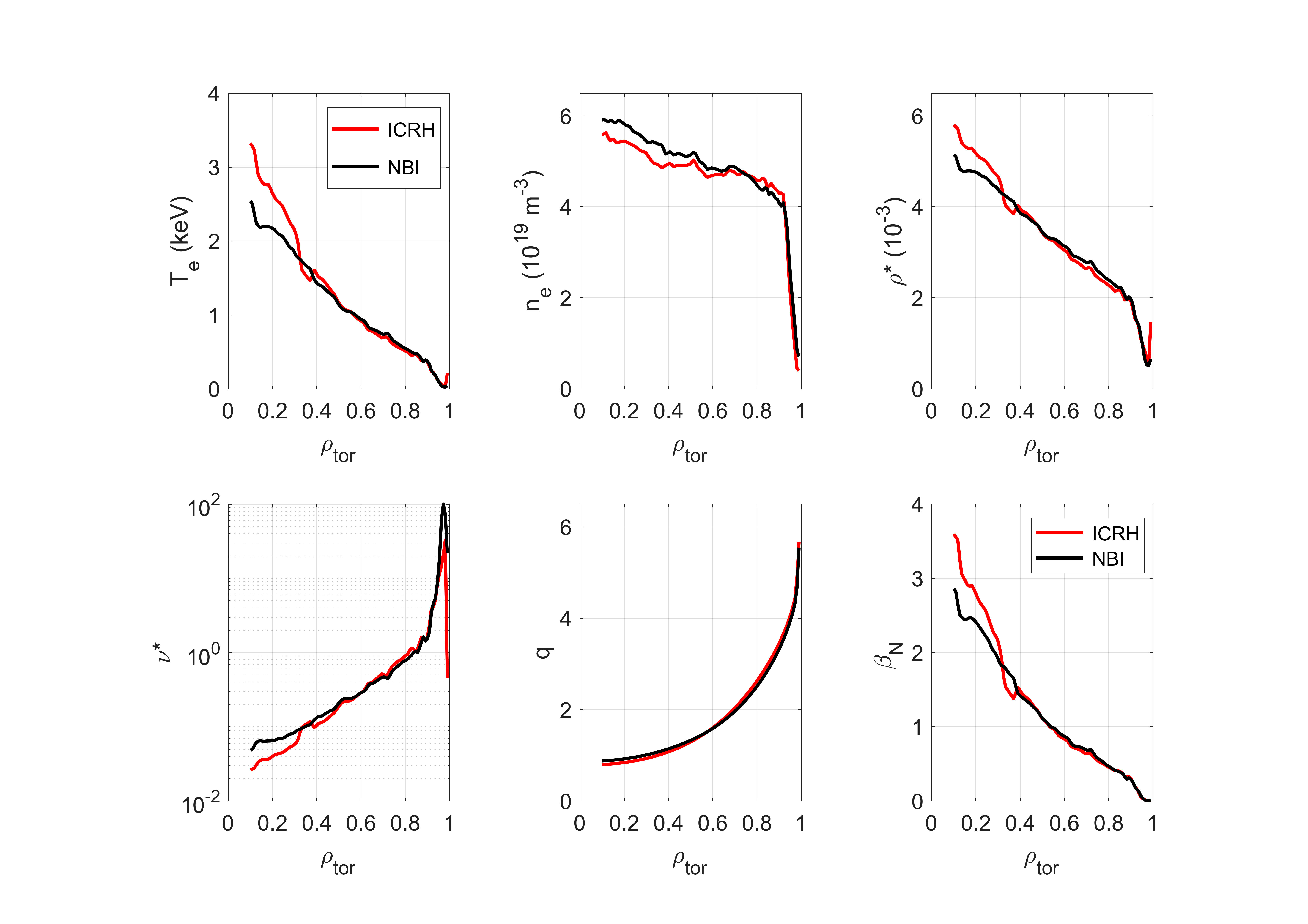 The main engineering and global dimensionless parameters are compared in table 1. The general conclusion is that 8MW of NBI and ICRH (roughly 4MW goes to ions and 4MW to electrons for each heating case) create similar plasma profiles and performance in JET despite various differences, such as larger steady-state gas puff needed in the NBI pulse to get the same pedestal height in ne. The main differences are the toroidal rotation (10km/s counter-Ip in ICRH pulse and 110km/s co-Ip for the NBI pulse), power deposition profiles, fast ion content (14% versus 8%), ELM characteristics, radiation and heavy impurity concentration. Although Zeff is very similar between the two pulses, the concentration of heavy impurities, such as W and Ni, is a factor 2-4 higher in the case of the ICRH discharge. Therefore, the higher W concentration and higher W peaking in ICRH plasmas does not explain the higher ne peaking in NBI plasmas. Concerning the differences in the MHD activity, the sawtooth frequency goes from 3Hz to 6Hz from the ICRH to NBI pulses and similar trend is seen for fish-bone activity. NTMs are minor in both cases. The effect of MHD activity is limited to the central region (ρtor<0.3), and does not affect the core (0.3<ρtor<0.8) transport analysis. The pedestal is similar between the shots and thus does not explain the higher ne peaking in NBI plasma. The possible candidates left are the rotation and fast ion content modifying particle transport or the NBI fueling. 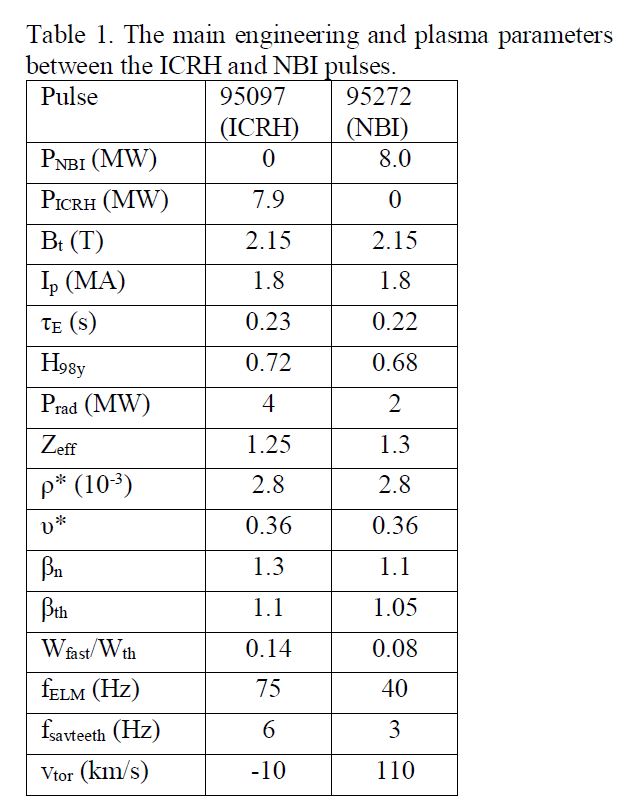 Gas puff modulation technique has been developed with high quality time-dependent density profile measurements to determine particle transport coefficients on JET 1. The experimental density modulation amplitude and phase together with the determined perturbative D ̃ and V ̃ profiles are shown in figure 3. The phase profile is flatter in the case of ICRH, giving rise to higher diffusion, which is clearly seen in figure 3. Although these profiles represent perturbative transport coefficients, this suggests that the steady-state particle transport could also be different between the two pulses and contribute to the difference in ne peaking. 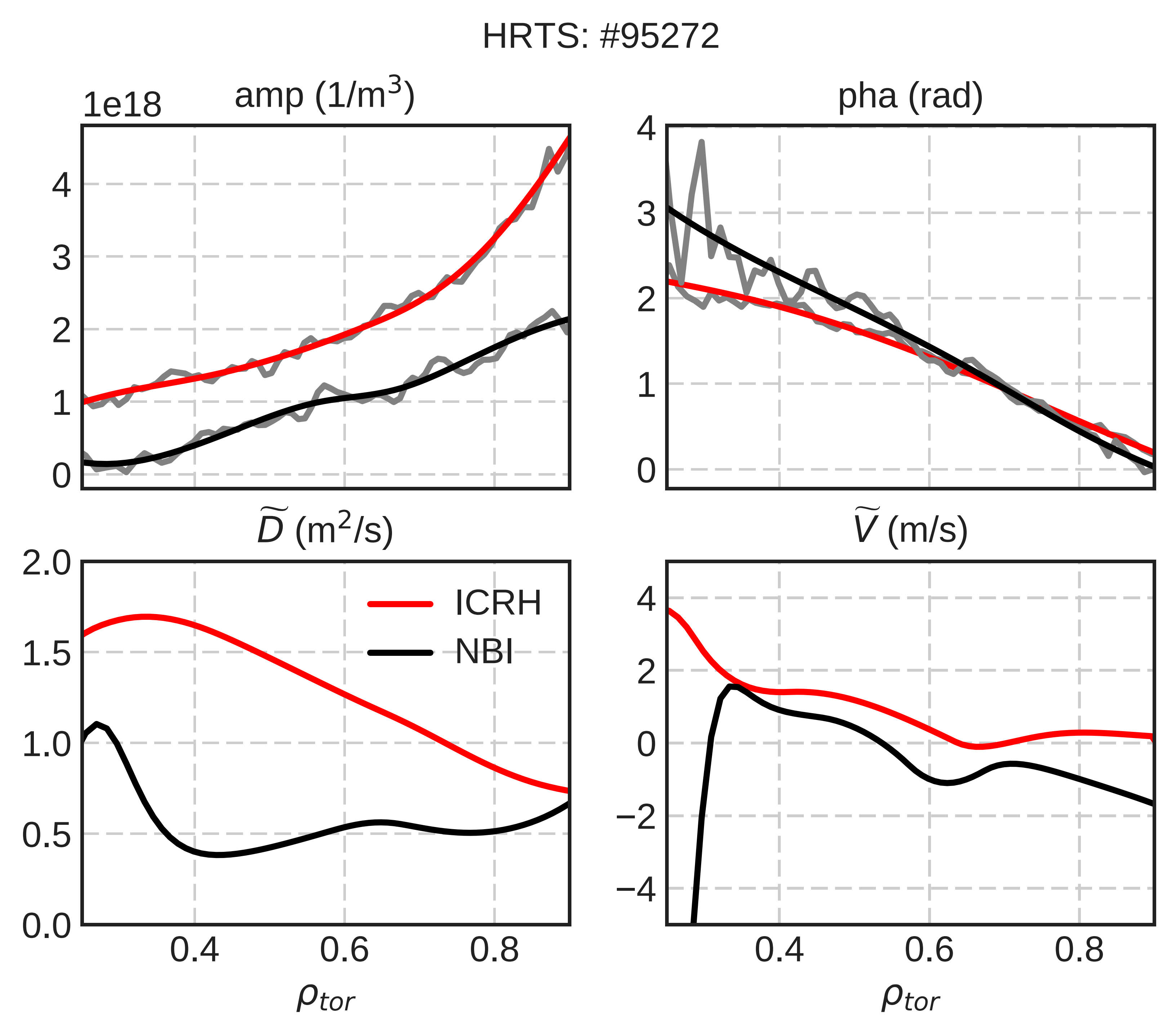 In order to quantify how large fraction from the difference in ne peaking between the ICRH and NBI heated plasmas is due to the NBI particle source or whether there are also transport changes due to rotation or fast ion content in play, integrated transport modelling with ETS/TGLF will be performed. For the first time integrated modelling by including the actual gas puff modulation with time varying density modulation is performed with JINTRAC/QualiKiz. The perturbative transport coefficients from the transport modelling can be directly compared to the experimental ones. Finally, gyro-kinetic GENE simulations are performed to quantify the role of NBI fueling versus changes in particle transport.

The ICRH versus NBI identity plasmas in JET show that the NBI fuelled discharge has 50% higher density peaking. Otherwise the ICRH and NBI heated identity plasmas yield similar plasma parameters and performance despite the obvious differences in rotation and fast ion content. This result is valid at 8MW of heating power level, however, it remains to be seen how this promising result will scale to larger power levels and to larger devices.