Controlling large edge localized modes (ELMs) is critical for tokamaks operating in H-mode, due to potentially severe consequences on material damages caused by ELM bursts in future large scale devices such as ITER $[1]$. Resonant magnetic perturbation (RMP) has been extensively applied to mitigate or suppress ELMs $[2]$. In this work, we report two new recent results on the effect of the $n=1$ ($n$ is the toroidal mode number) RMP fields on ELMs and the associated plasma transport. One is the experimental result on the HL-2A tokamak, where large type-I ELMs were for the first time on this device suppressed by the applied $n=1$ RMP. The other is the toroidal modeling study on the plasma core flow damping by the applied $n=1$ RMP, with computational results quantitatively agreeing with experiments in ASDEX Upgrade $[3]$.

In HL-2A experiments, we find that an increase in turbulence around the pedestal region plays an essential role in the ELM suppression dynamics. The plasma flow damping due to RMP may be a direct cause of the observed increase of turbulence. Figure 1 shows a typical ELM suppression discharge with $4.9 kAt$ current in the coils. The pulse has the toroidal magnetic field of $B_T=1.34$ T and the plasma current of $I_p=120 kA$.The plasma edge safety factor is $q_{95}=3.8$. Within one ELM cycle after switching on the RMP, the large type-I ELM disappears. After the perturbation field is turned off later on in the discharge, large type-I ELMs return. 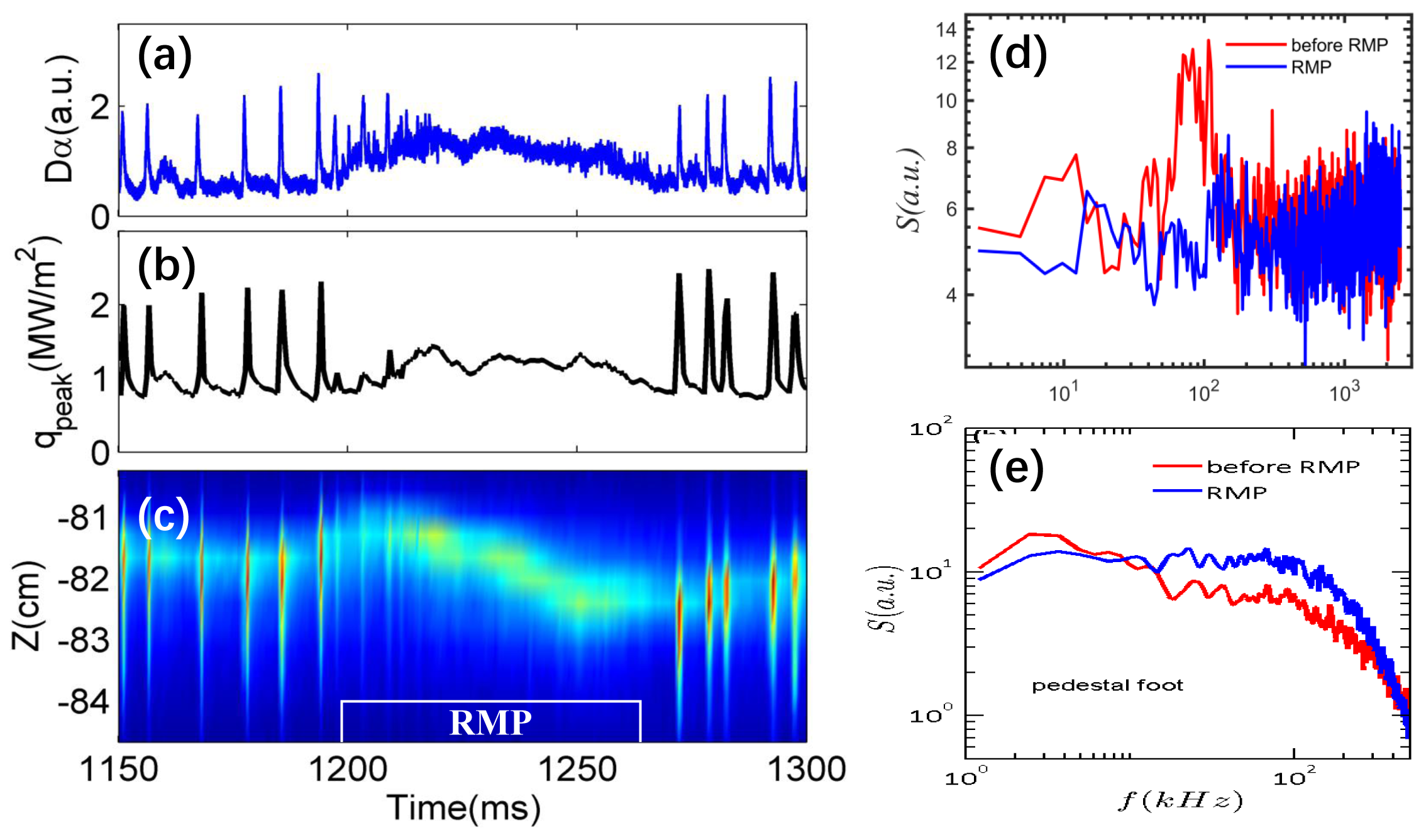 We mention that suppression of type-I ELMs in HL-2A is globally confirmed across all diagnostics utilized to monitor the ELM properties, including the particle flux to the divertor target plate and heat flux measured by an infrared camera.

Flow damping has also been observed in the ASDEX Upgrade ELM control experiments. In one set of experiments, it was found that the core plasma toroidal rotation was signiﬁcantly reduced by the RMP ﬁeld induced $m/n = 1/1$ plasma response. We carry out both linear and quasi-linear plasma response modelling, assuming the $n=1$ RMP ﬁeld as in experiments. The computational tools that we utilize are the MARS-F $[4]$ and MARS-Q $[5]$ codes. For the linear plasma response, several aspects are primarily investigated: (i) comparison of the poloidal spectra between the vacuum ﬁeld and the plasma response ﬁelds, (ii) the plasma boundary corrugation due to 3D ﬁelds, (iii) comparison of toroidal torques, including the neoclassical toroidal viscous (NTV) torque $[6]$ and torques associated with the Maxwell and Reynolds stresses. For the quasi-linear plasma response, we investigate the (physically) non-linear interaction between the core plasma toroidal ﬂow and the plasma response to the RMP ﬁeld. The toroidal torques usually act as the sink term in the momentum balance equation, leading to ﬂow damping $[7, 8]$. 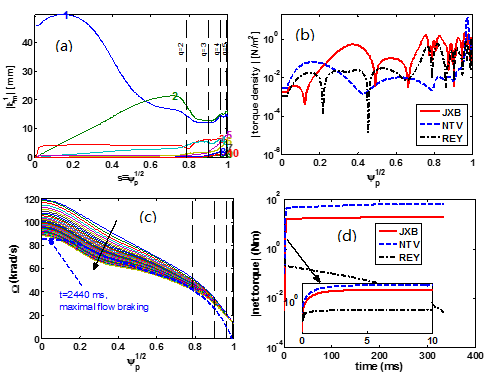 The simulation results are summarized in Figure 2. Linear response computations show a large internal kink response [Fig. 2(a)] when the plasma central safety factor $q_0$ is just above 1. This internal kink response induces neoclassical toroidal viscous (NTV) torque [Fig. 2(b)] in the plasma core, which is signiﬁcantly enhanced by the precessional drift resonance of thermal particles in the super-banana regime. Quasi-linear simulation results reveal a core plasma ﬂow damping by about $25\%$, agreeing well with experimental observations, with the NTV torque playing the dominant role [Fig. 2(c) and (d)]. Sensitivity studies indicate that the internal kink response and the resulting core ﬂow damping critically depend on the plasma equilibrium pressure, the initial ﬂow speed, the coil phasing and the proximity of $q_0$ to 1. No appreciable ﬂow damping is found for a low $\beta_N$ plasma. A relatively slower initial toroidal ﬂow results in a stronger core ﬂow damping, due to the enhanced NTV torque. Weaker ﬂow damping is achieved as $q_0$ is assumed to be farther away from 1. Finally, a systematic coil phasing scan ﬁnds the strongest (weakest) ﬂow damping occurring at the coil phasing of approximately 20 (200) degrees, again quantitatively agreeing with experiments. This study points to the important role played by the internal kink response in plasma core ﬂow damping in high-beta hybrid scenario plasmas such as that foreseen for ITER.