This paper presents numerical modelling to assess the fast shutdown scenario by shattered pellet injection (SPI) in a baseline strategy of the ITER Disruption Mitigation System (DMS). A new versatile 1.5D disruption simulator INDEX is applied for this purpose and a SPI ablation/assimilation model has been implemented. Pre-thermal quench (pre-TQ) H$_2$/D$_2$ SPI is proposed as a promising scheme to avoid hot-tail runaways and the simulation shows that the scheme is consistent with the material injection capabilities in the present DMS design.

Simulation Method:
The INDEX code used in this paper is a 1.5D tokamak modelling code coupled to an external circuit model, which has recently been developed at QST for disruption load assessment. The axisymmetric conductor model of ITER was implemented and benchmarked successfully against the DINA code [V. Lukash et al 2005 Plasma Phys. Control. Fusion 47 2077]. To evaluate the particle source due to SPI, the motion of thousands of pellet shards is traced numerically as marker particles. The ablation scaling laws, e.g., Ne/D$_2$ composite pellet ablation scaling [P. B. Parks, TSD Workshop, Princeton 2017], are used to calculate the ablation of shards and underlying ablation physics is discussed. Though the present 1.5D modelling comes with simplifications and does not capture 3D aspects of SPI, its easy-to-use and fast computation capabilities allow assessing sensitivity of the mitigation process on key plasma and SPI engineering parameters.

Pure H$_2$/D$_2$ SPI Scheme to Raise the Electron Density for RE avoidance:
Runaway electrons (REs) are an important issue for ITER operation because a very large avalanche gain was predicted by the theory and also because the high temperature of fusion core plasma can produce significant runaway seeds through the hot-tail mechanism. It has been proposed to use SPI with a mixture of a small quantity of Ne and a large quantity of D$_2$ to avoid REs [J. R. Martín-Solís et al 2017 Nucl. Fusion 57 066025]. However, it is uncertain whether the plasma can assimilate the required amounts of material, because a TQ will likely be triggered when the cold front reaches the q = 2 surface, at which point the energy is radiated away and not available for pellet ablation anymore.

This paper proposes a different scheme based on a two-step SPI: first, pure H$_2$/D$_2$ SPI to raise the electron density; second, Ne or Ne mixed SPI to radiate the stored energy. At the first step, we revisit massive deuterium injection [M. N. Rosenbluth et al 1996 Proc. 16th Int. Conf. on Fusion Energy, Montreal Vol. 2 p. 979] with the assumption that dilution cooling does not trigger an immediate TQ when the pellet shards reach the q = 2 surface. To support this, we present INDEX simulations of plasma and current profiles after SPI in figure 1. It is seen that comparing with Ne mixed SPI case (top), pure H$_2$/D$_2$ SPI (bottom) does not cause a radiative collapse of the electron temperature profile to 10 eV range, and does not perturb the current profile. After dilution cooling, the slowing down time of hot electrons (whose velocity is much faster than the thermal velocity) can be shorter than TQ times (0.1-1ms), while the voltage is maintained below the critical threshold for runaways. Therefore, raising the density in such a way has the benefit of avoiding hot-tail runaways. 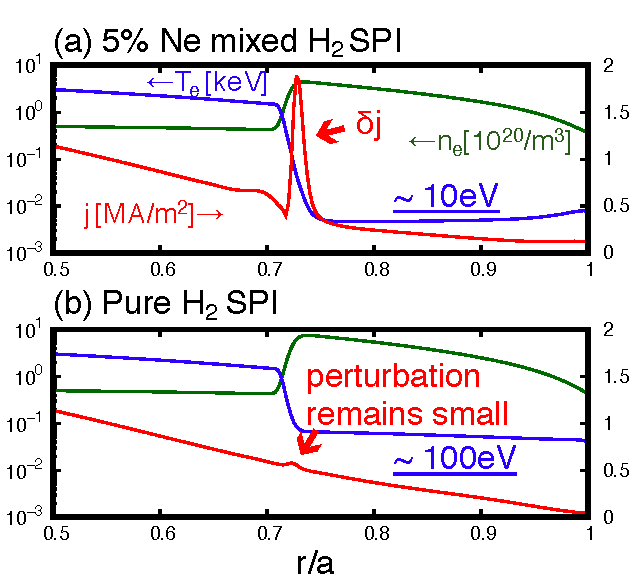 Open questions remain regarding the role of intrinsic impurities, whether densities significantly higher than the Greenwald value can transiently be achieved, and the available time window for the subsequent Ne injection to radiate the stored thermal and magnetic energies. Detailed INDEX simulations will be presented on these aspects. Experimentally, a super-dense plasma with the electron density up to $7\times 10^{21}$/m$^3$, far exceeding the Greenwald limit, is observed transiently after pre-TQ D$_2$ SPI at DIII-D [N. Commaux et al 2010 Nucl. Fusion 50 112001], which may support the present scheme. Careful investigations are also needed for the post-TQ phase in ITER because even if the hot-tail mechanism is avoided, the tritium decay and Compton scattering act as steady sources of REs in nuclear operation. As a possible option to mitigate REs, we consider performing repetitive injections of H$_2$/D$_2$ pellets to deplete the RE population by collisions of REs with the shards.

Assimilation Efficiency of Multiple Injection in ITER Reference Scenarios:
Another highlight of this paper is an extensive study of the assimilation efficiency of SPI. Different injection quantities, shard sizes, injection velocities, and pellet compositions are compared. In the present DMS design, more than twenty flight tubes are prepared in three equatorial ports. Each pellet of diameter D = 28.5 mm and length over diameter ratio L/D = 2 can deliver up to $2\times 10^{24}$ hydrogen atoms. Because any pellets bigger than this size are not compatible with the planned pulse repetition rates, quantities > $2\times 10^{24}$ atoms must be delivered by ‘multiple injection.’

Example simulation data are illustrated in figure 2(a) for 15 MA DT H-mode operation with thermal energy of 367 MJ (red) and for selected scenarios during the non-nuclear operation (blue). The SPI assimilation is shown in terms of the density increase averaged over the volume inside r/a < 0.8. The red curve shows close to 100 % assimilation for injection of up to 10 barrels as can be seen from the dashed line that represents the injected quantity divided by the plasma volume. We found that the pellet penetration depth increases with the injected quantities, and at least three pellets are needed to raise the density at the plasma center. Conversely, the blue curve, the efficiency for the non-nuclear scenario plasmas, saturates at smaller quantities because of lower thermal stored energy available for ablation and ionization of the injected material.

Figure 2(b) compares the assimilation with different pellet compositions, showing that a mixed amount of Ne < 5% of a single pellet can degrade the efficiency. No gain at all, or even a loss of the efficiency was observed for mixed pellets. Also regarding the aspect of the assimilation efficiency, our separate injection scheme of pure H$_2$/D$_2$ SPI is consistent with the injection capabilities of the present design. 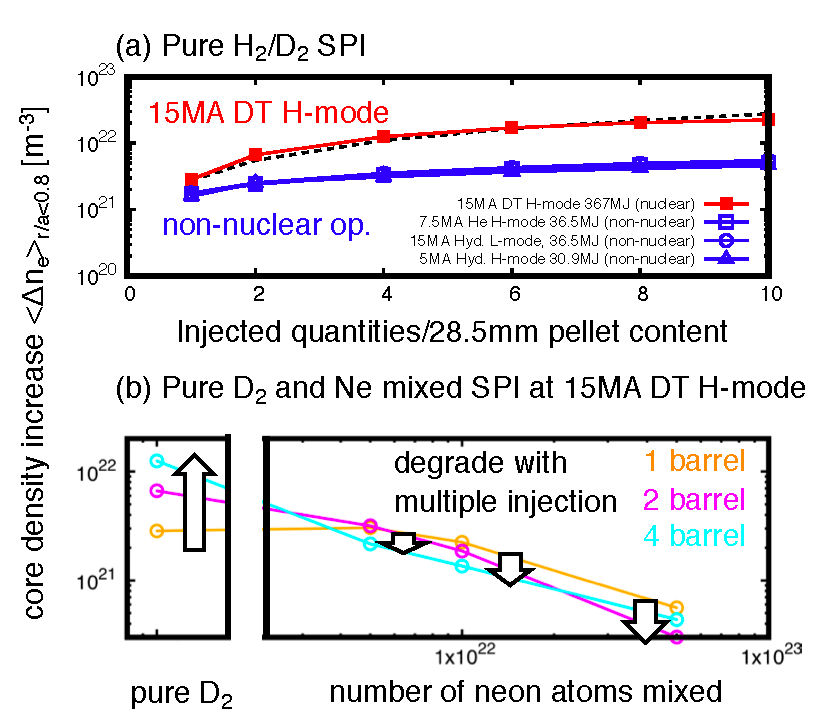