In this presentation, we report recent advances in the development of the CFQS quasi-axisymmetric stellarator as a joint project of National Institute for Fusion Science, Japan and Southwest Jiaotong University, China. The quasi-axisymmetric stellarator (QAS) offers good plasma confinement properties with low aspect ratio, giving a prospect to become a compact fusion reactor. MHD equilibrium of the CFQS was designed based on that of the CHS-qa [1,2]. The modular coil (MC) system, toroidal field coils (TFCs), poloidal field coils (PFCs), and support system have been designed. Analysis based on finite element method showed sufficient robustness of support system for 1 T operation. A mock-up of MC is now being constructed by a manufacturing company in China to check the manufacturability and achieved accuracy of the MC. The project is steadily proceeding on schedule to achieve a first plasma in 2021.

A QAS has an axisymmetric magnetic field configuration in the special magnetic flux coordinates, Boozer’s coordinates. The guiding center orbit of particle in plasma is determined by the structure of magnetic field in Boozer’s coordinates, therefore the neoclassical transport of the QAS can be reduced to a level of similar to tokamak. Moreover, QAS does not essentially require plasma current with retaining the advantage of the steady-state operation capability. Therefore, QAS offers a great opportunity to overcome disadvantages in both tokamaks and helical systems, e.g., major disruption in tokamaks, enhanced neoclassical transport and/or suppressed plasma rotation due to non-axisymmetric ripple in helical systems simultaneously. Furthermore, in the QAS, the low aspect ratio can be achievable unlike other present stellarators while keeping good confinement property. Therefore, QAS has a great potential to realize the compact fusion reactor in the future.

The CFQS will be the first QAS in the world. The device will be constructed in China, under the international joint project of National Institute for Fusion Science, Japan and Southwest Jiaotong University, China [3]. By using this experimental device, we will perform proof-of-principle experiment to verify the effectiveness of the QAS concept. The physics design for the CFQS is almost completed [4, 5]. Good confinement property in the context of neoclassical transport is realized by introducing the QAS configuration. Due to QA configuration, substantial bootstrap current will be spontaneously generated in finite  condition. However, analysis tells us that no significant effect due to bootstrap current will be seen in the QAS property. MHD instability is stabilized by the magnetic well property, and by using Mercier criteria we confirmed that interchange mode can be stabilized. Also, turbulent transport is investigated by the GKV code. The result shows that magnitude of turbulent transport is similar to that of axisymmetric-limit configuration.

The engineering design is now being performed intensively. The main parameters of the CFQS are shown in Table 1. The total number of MCs was chosen to be 16 with 4 different types of coils. Normal conductor of copper is used for coils. For flexibility of magnetic field configuration, 12 TFCs and two pairs of PFCs are designed. The magnetic coil system and vacuum chamber of the CFQS are depicted in Fig. 1. In order to resist large electro-magnetic forces while keeping large space necessary for diagnostics and heating systems, we have designed the support structures, which consist of coil cases with cage-like support structure and center pillars. The cage-like support structure is formed by the top frame, bottom frame, and eight outboard side pillars as shown in Fig. 2. Analysis based on the finite element method was performed by ANSYS/Mechanical to check the von-Mises stress, deformation, and elastic strain. These results show that this support system is sufficiently robust for 1 T operation. 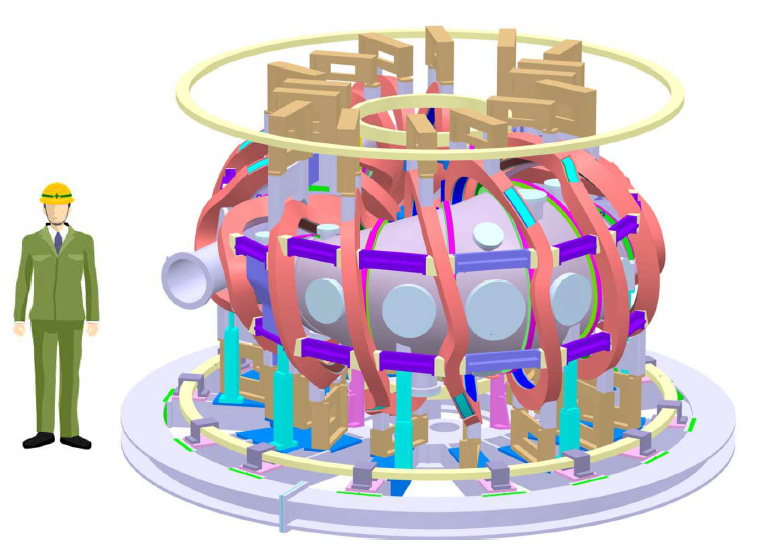 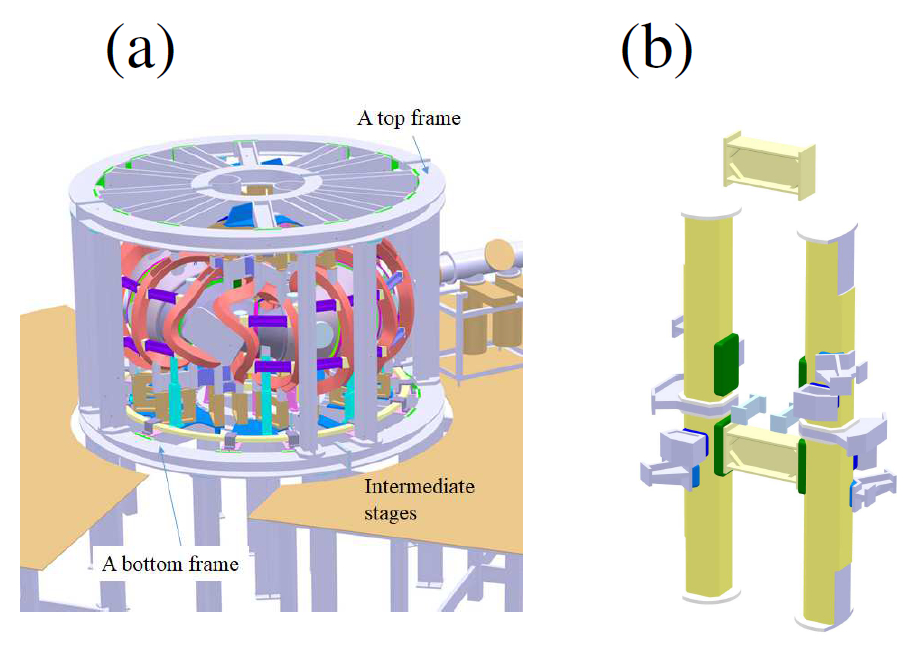 At present, the mock-up MC, which is the most complicated in shape, is now being constructed by a manufacturing company in Hefei, China to check the feasibility of manufacturing and the accuracy of the MC. The computerized numerical control machine was employed to finalize the surface of winding mould. The copper conductor wrapped with layer insulator material was wound onto this winding mould, and the vacuum pressure impregnation (VPI) process finished as shown in Fig.3. Now, various tests, e.g. impulse test to check isolation and running test, are being carefully performed. The first plasma will be obtained in 2021. The CFQS will show the effectiveness of the QAS concept experimentally, and hence, a new possibility of advanced magnetic confinement devices.