Assembly of 1 MV power supply (PS) components to produce 1 MeV negative ion beams have been completed for the ITER neutral beam test facility (NBTF). To realize 1 MV insulation after the assembly of long and complicated components, (i) dust and particle during the assembly were controlled, (ii) the transmission line (TL) with a total length of 100 m composed of 22 series connected vessels was assembled with an accuracy of less than ± 2.5 mm, and (iii) contact resistance at more than 500 connecting points for inner electrical conductors were controlled. Finally, high-voltage has been successfully insulated in the final configuration with all components. The present achievement contributes to an insulation design verification of the ITER NB PS system.

(Introduction)
In the ITER neutral beam (NB) system, deuterium negative ion beam with 1 MeV, 40 A for 3600 s is required for plasma heating and current drive. The NB Test Facility (NBTF) is now being constructed in Padova, Italy, to achieve such high requirement prior to the ITER operation. Japan procures DC 1 MV power supply (PS) components for the NBTF and the ITER NB. Since this PS consists of various kinds of component with 100 m long, manufacturing and factory test have been performed over five years, and shipping and installation have been proceeded in parallel step by step as presented in the last FEC [A]. The on-site assembling technique for such complicated 1MV PS components is one of challenges not only for the ITER NB but also typical electrical components. As recent progress in the last two years, completion of assembly and also high-voltage insulation test of DC 1 MV power supply components are reported.

(Assembly of DC 1 MV power supply components)
The DC 1 MV PS system as shown in Fig.1 consists of five DC generators (DCG), DC filter (DCF), transmission line (TL), 1 MV insulating transformer, high-voltage deck 2 (HVD2) to provide cooling water and gas from the grounded potential to 1 MV and HV bushing acting as a bulkhead between a vacuum-insulated beam source and the gas-insulated TL and also an insulating feedthrough for conductors and pipes. The TL with a total length of 100 m is composed of 22 series-connected pressure vessels with a typical diameter of 2 m and length of 5 m. Conductors with five-different voltages from 0.2 to 1 MV are allocated inside the vessel filled with SF6 gas. As for the installation of such the TL extending from indoor to outdoor, (i) the particle content in the environment was confirmed to be less than 0.14 mg/m$^3$. To mount sensitive internal parts inside the vessel, a temporal dustproof room was utilized to avoid dust. As the geometrical requirement on the installation, (ii) a fine positioning is quite important to connect vessels in series over 100 m. The routing of the TL identical to that in ITER is complicated, and hence vessels shall be installed with an accuracy of less than $\pm$ 2.5 mm taking into account the specification of the bellows equipped at several points to absorb the displacement. Among the vessels of the TL for instance, the heaviest one with 18 ton, 3 m in diameter, 7 m in long, encloses the surge block core for a surge protection in the breakdown, whose location was designed through a circuit analysis. The designed location was inevitable to have sufficient ability to absorb the surge energy, however, that was just at the building wall penetration, where the overhead crane cannot access. To realize the fine positioning even in such location, the tank was lifted down indoor and rolled to outdoor with special rollers on the slide rail. At the final connection in the TL3, the position of the vessel was confirmed to be with the accuracy of $\pm$2 mm which can be absorbed with the bellows.

Inside the vessels, inner conductors at 0.2~1 MV potential are allocated and each conductor has a connection point every 2~3 m. In order to connect in series over 100 m in the TL, a flexible connector was utilized to absorb axial and angular displacement by sliding and swinging the head of the connector. Meanwhile, the number of connecting point is more than 500 in the TL and high-current conductor up to 5000 ampere is included. Therefore, the contact resistance at a connection point should be suppressed as small as possible to avoid excess heat generation at the connecting point. Thus, according to the current, the criteria of the contact resistance were set. As a result, the typical contact resistance was ~4$\mu\Omega$ for a high-current conductor and ~40 $\mu\Omega$ on average for the low-current (less than 750 ampere) conductor, which were less than allowable values of 9.6 $\mu\Omega$ and 50 $\mu\Omega$, respectively.

(High-voltage insulation test of DC 1 MV PS components)
The 1 MV PS system is required to operate stably for 1 hour. Characteristics of DC long-pulse insulation is perfectly different from that in AC insulation (or DC short-pulse insulation). During DC long-pulse insulation, the voltage distribution changes from capacitive distribution to resistive one. Taking into account of the time constant, test conditions were selected and agreed by ITER as (1) 1.2 MV for 1 hour at 120 $\%$ of rated voltage, (2) 1.06 MV for 5 hour for long-pulse insulation and (3) repetitive ramp-up from 1.06 to 1.265 MV (five times) to simulate over-voltage. High-voltage insulation test (HV test) were performed as the first site acceptance test with the testing power supply under the above test condition. The HV test was performed with testing power supply (TPS) in the upstream (DCG and DCF, HV test-1) and downstream (TL~HV bushing, HV test-2~5) area, respectively as shown in Fig.1. During the HV test 2~5, the HVD1 procured by EU, 1 MV insulating transformer and HV bushing were connected to TL sequentially to mitigate a risk of failure propagation in the PS components. Figure 2 shows the measured TPS current at 1 MV for each HV test and its content was analyzed. At the HV test 1, the measured current showed good agreement with the estimated one and the insulation capability has been confirmed. Taking into account a contribution from each component obtained in the HV tests 2~4 and the factory test, the TPS current in the final configuration was also analyzed. In the HV test 5, miscellaneous current was found. It could be the leak current attributing to exposing the TL to the atmosphere after the HV test 4, the measured current was comparable to the estimated one, which also showed electrical soundness in addition to the insulation capability. And then, finally, all HV tests have been successfully completed.

The present achievement contributes to push forward with a start of the second site acceptance test integrating with the invertor system and DCGs to be done in n the 2nd quarter of 2020, which leads to an insulation design verification of the ITER NB PS system. 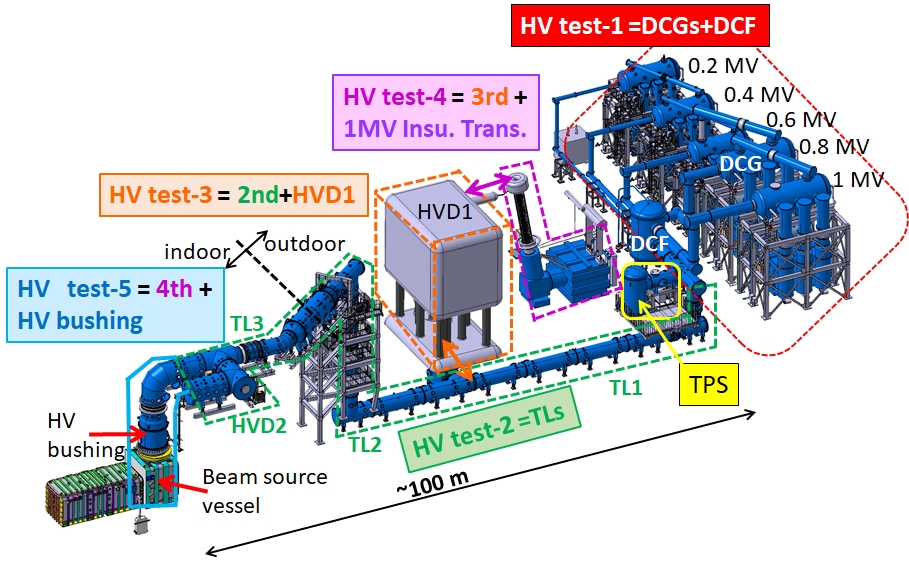 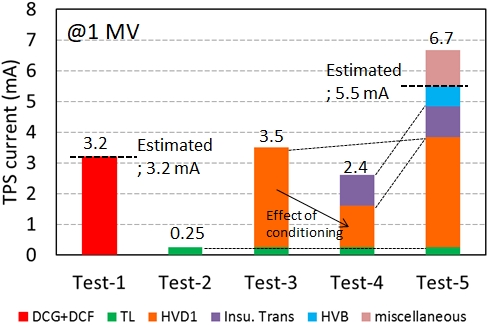