Successful operation of ITER will require robust regulation of the plasma temperature and density despite the plasma's nonlinear dynamics and various uncertainties. In this work, a burn-control algorithm was designed to determine control efforts that will drive the plasma to desired targets. In order to effectively achieve the commanded control efforts, control allocation modules were developed to optimally manage ITER's heating and fueling actuators. Using Lyapunov techniques, the nonlinear controller was synthesized from a zero-dimensional two-temperature model. For burning plasmas in ITER, the accuracy of the widely used scaling laws for the energy confinement time is unsure because they are based on experiments without alpha particle heating. Therefore, the proposed controller was designed with an adaptive estimation scheme to handle uncertainties in the plasma confinement and other complex phenomena (i.e. the fuel recycling and impurity sputtering that results from plasma-wall interactions). The plasma density is regulated by two control laws that request injection rates of deuterium and tritium. In ITER-like burning plasmas, the majority of the alpha particle heating will be deposited into the plasma electrons (ions receive less than $25\%$ of it). Consequently, the electron and ion temperatures will be uncoupled. The proposed controller independently regulates the ion and electron temperatures with separate control laws for the external ion and electron heating. Because the radiation losses depend on the electron temperature and the fusion reactivity depends on the ion temperature, independent temperature regulation permits plasma scenarios with improved performance.

ITER will have access to an ion cyclotron (IC) heating system ($20$ MW), an electron cyclotron (EC) heating system ($20$ MW) and two neutral beam (NB) injectors ($16.5$ MW each). With two commanded heating efforts (for the ions and electrons) and four heating actuators, an optimal control allocation (CA) module is necessary to map the commanded heating efforts to the heating actuators. The map can be written as $v=Bu$ where the vector $v$ contains the controller's commanded efforts, the vector $u$ contains the actuator allocation (power supplied by each actuator), and the control effectiveness matrix $B$ includes efficiency factors ($0-100\%$) for each actuator and the fractions of neutral beam heating that is delivered to the plasma ions and electrons. The allocator was designed with modularity such that it can be readily swapped out for another allocator. At each simulation time step, the proposed CA module solves an optimization problem that considers the saturation and rate limits of the heating actuators. The optimization problem was formulated as a strictly convex quadratic program (QP) that always permits a unique optimal solution. Since ITER will have only two fueling pellet injectors to satisfy the proposed controller's deuterium and tritium injection rate commands, CA is not required for density control.

An adaptive CA module with uncertainty in the allocation mapping ($B$) was also designed for the proposed adaptive burn controller. Unlike the previous QP CA module, this CA module considers the controller's commanded fueling efforts so that uncertainties in the tritium fraction of the fueling pellets can be handled. Furthermore, the actuator efficiency factors and the neutral beam heating fractions for the ions and electrons were considered uncertain. This adaptive CA module takes into account actuator dynamics, which also contain uncertainties, such as actuation lag times resulting from the thermalization delay of injected neutral beam particles, the ablation time for fueling pellets, ect. A Lyapunov function was used to formulate a dynamic update-law for $u$ (more computationally efficient than solving an optimization problem online).

This work has been supported in part by the U.S. Department of Energy under DE-SC0010661. 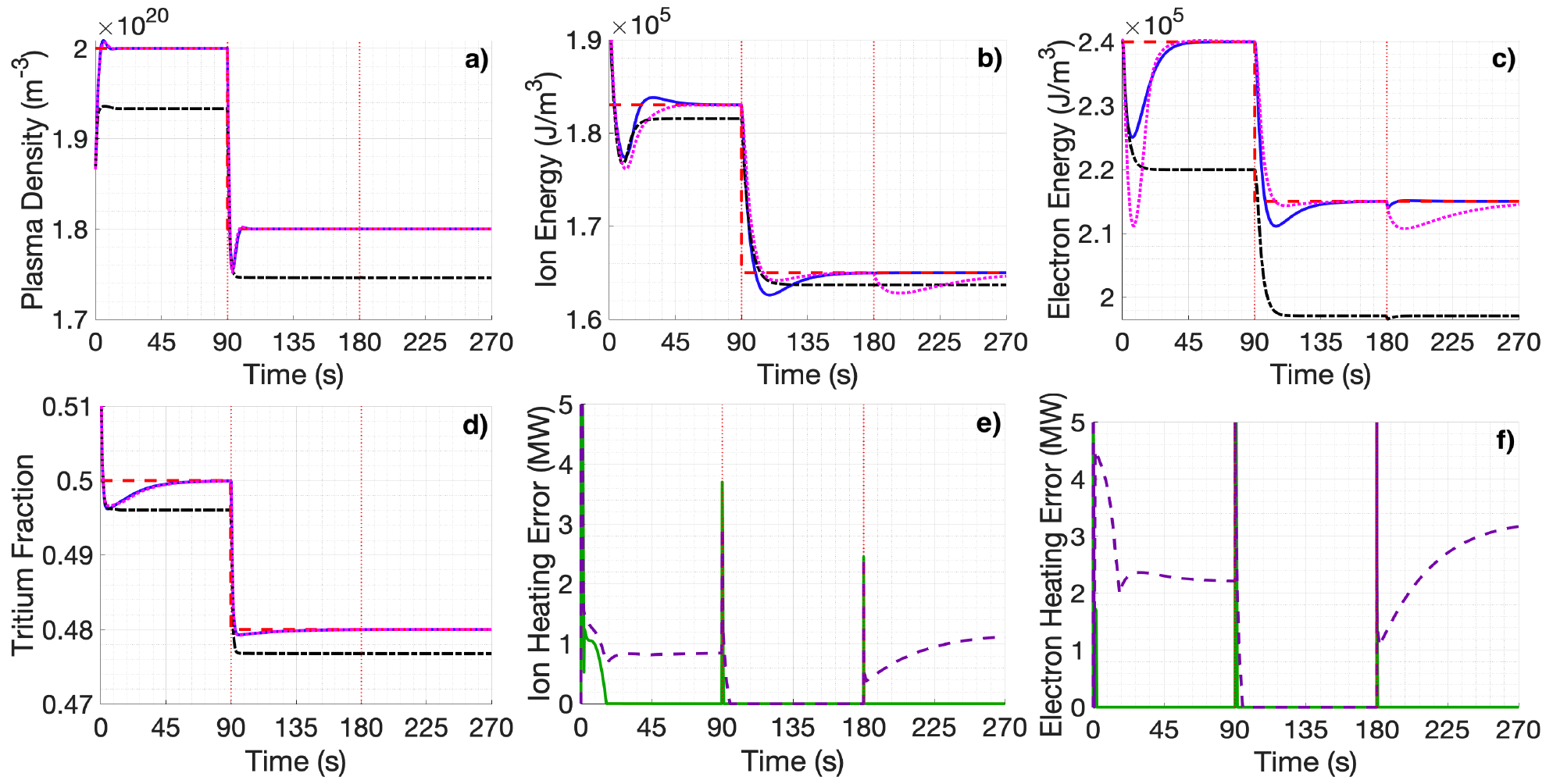 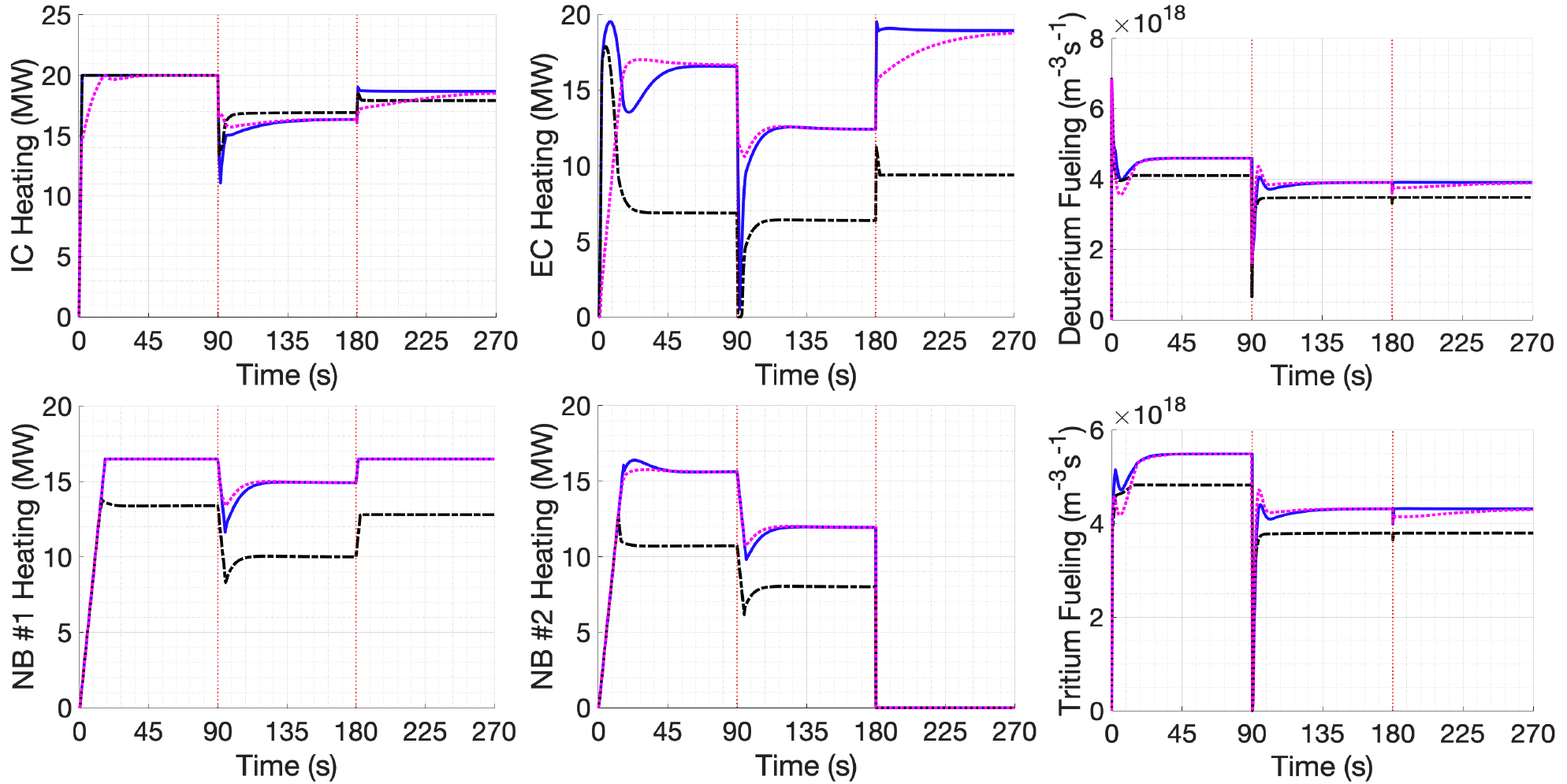