A novel integrated model GOTRESS+ has been developed, which consists of the iterative transport solver GOTRESS as a kernel of the integrated model$^{1,2}$, the equilibrium and current profile alignment code ACCOME and the neutral beam heating/current-drive code OFMC. GOTRESS is able to find out an exact steady-state solution using global optimization techniques, enabling us to robustly deal with even stiff transport models like TGLF. Due to numerical algorithms implemented yielding a large amount of data, a surrogate model can readily be established with Machine-Learning (ML) techniques employed, which makes computation much faster$^2$. This unique characteristic of GOTRESS in terms of affinity to ML techniques distinguishes GOTRESS+ from other similar codes/frameworks$^3$ and makes it very competitive. GOTRESS+ is then suitable for developing operation scenarios of JT-60SA as well as ITER and validating the feasibility of the scenarios. In conjunction with the EPED1 model, GOTRESS+ has gained the capability of predicting an entire plasma with pedestals, essential for achieving high-performance plasmas.

GOTRESS+: A novel integrated model for developing and validating scenarios

Eliciting the performance of JT-60SA as high as possible, a variety of typical operation scenarios have been proposed, having their specific target parameters. An assessment of their feasibility must be performed by an integrated transport code with a transport model. For this purpose, the integrated time-dependent code TOPICS has been employed with the CDBM transport model used and some of the scenarios have been confirmed to meet the target parameters. However, the advanced transport model TGLF is difficult to adopt in conventional transport codes because it takes long time to compute and it sometimes causes wiggled profiles that make a simulation result unphysical due to its stiff nature.

The iterative transport solver GOTRESS has been developed to manage such stiff transport models by overcoming these difficulties$^{1,2}$. GOTRESS makes use of global optimization techniques such as genetic algorithms and the Nelder-Mead method to solve steady-state transport equations and is free from evaluating gradients of temperature, which are crucial inputs to stiff transport models. This unique characteristic avoids the potential problem associated with numerical differentiation. GOTRESS has successfully been executed together with TGLF on an MPMD framework$^2$.

Also, a method for constructing a surrogate model of transport models based on an artificial neural network (NN) model was established$^2$, taking advantage of the GOTRESS feature that produces a large amount of data in a straightforward fashion. Due to the excellent hyperparameter optimization technique, the surrogate model is capable of reproducing the behavior of the original model with high precision, as shown in Fig. 1. Evaluation of the surrogate model of TGLF is about $10^4$ times faster than the original TGLF. The ion temperature $T_i$ profile predicted by GOTRESS with the NN surrogate model perfectly matches that by GOTRESS with TGLF, which successfully reproduced experimental observation in JT-60U H-mode discharge, as shown in Fig. 2. This characteristic realizes the frequent use of a high-fidelity transport model as a surrogate model in developing operation scenarios.

With GOTRESS utilized as a kernel of the model, an integrated model GOTRESS+ has been developed, in conjunction with ACCOME and OFMC. The main advantages of GOTRESS+ over conventional time-dependent codes including TOPICS are:

GOTRESS+ with CDBM is applied to JT-60SA scenario 5-1, what is called a fully-current-driven high-$\beta$ scenario. Even in this plasma with negative magnetic shear, the $q$ profile converges well. This scenario has already been assessed by TOPICS, which makes it possible to compare both results for benchmarking purposes. The GOTRESS+ prediction of $T_i$ excellently conforms to the TOPICS one, albeit very different numerical schemes adopted. The agreement is also obtained for the electron temperature $T_e$. Regarding computation time, GOTRESS+ runs about six times faster than TOPICS for this case. This comparison revealed the effectiveness and the validity of GOTRESS+.

Coupling of GOTRESS+ and the EPED1 model for entire plasma predictions

In the GOTRESS+ simulations so far, the boundary condition has typically been set to $\rho=0.8$ so as not to include the pedestal, because the physics governing the formation of the pedestal is different from that in the core region. The EPED1 model has widely been used to predict the pedestal height and width$^4$. GOTRESS+ is now extended to include our EPED1 model that uses MARG2D, the ideal MHD stability code covering from low to high $n$ modes, replacing the ELITE code originally used in Ref. 4, a fact which makes it possible to examine the ideal linear stability over the entire plasma. This feature is of critical importance for operation scenario development. A flow chart of cooperative calculation with EPED1 is shown in Fig. 3. Since EPED1 needs to be given profiles in functional form, the profiles computed by GOTRESS must be fitted in tangent hyperbolic form by means of generic algorithm$^1$. In EPED1, temperature profiles are scaled up/down if the initial ones render a plasma MHD stable/unstable and then an equilibrium is reevaluated using ACCOME. In this procedure, the density pedestal is subsequently changed even though GOTRESS does not currently calculate particle transport. This process is repeated until the marginal stability condition is met. A whole procedure of GOTRESS+ illustrated in Fig. 3 is then repeated until convergence. Figure 4 shows a converged $T_e$ profile by GOTRESS+ in JT-60SA after 5 iterations, which is a self-consistent solution between transport, the equilibrium, the safety factor, the heatings and pedestal stability. 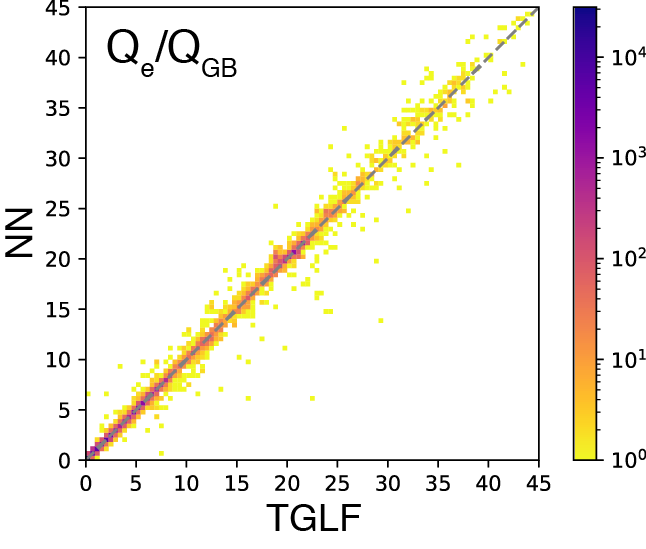 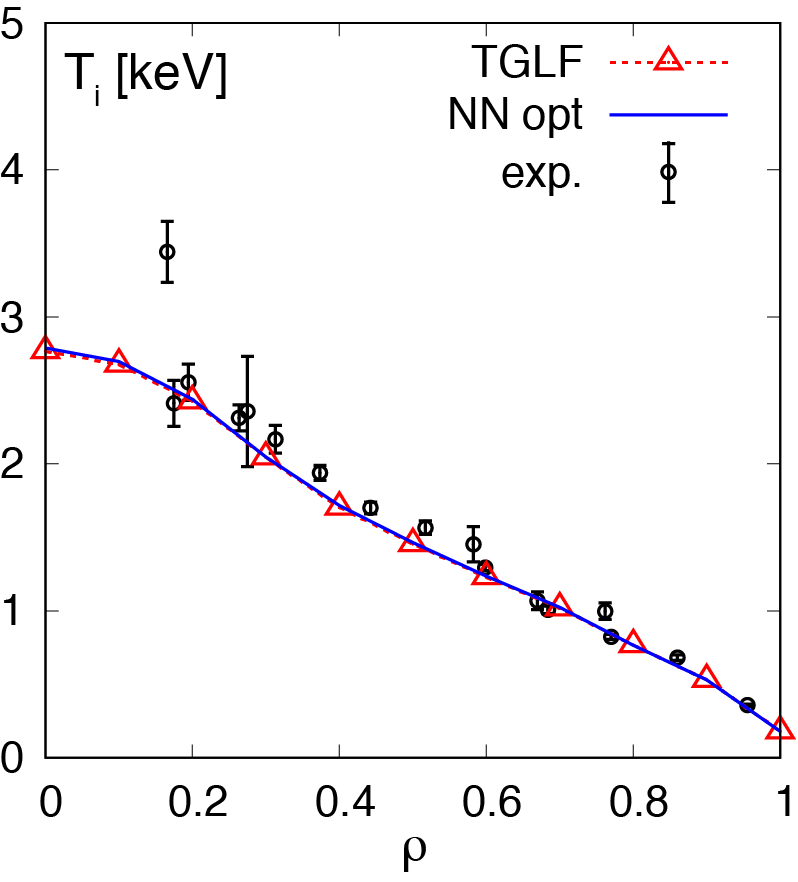 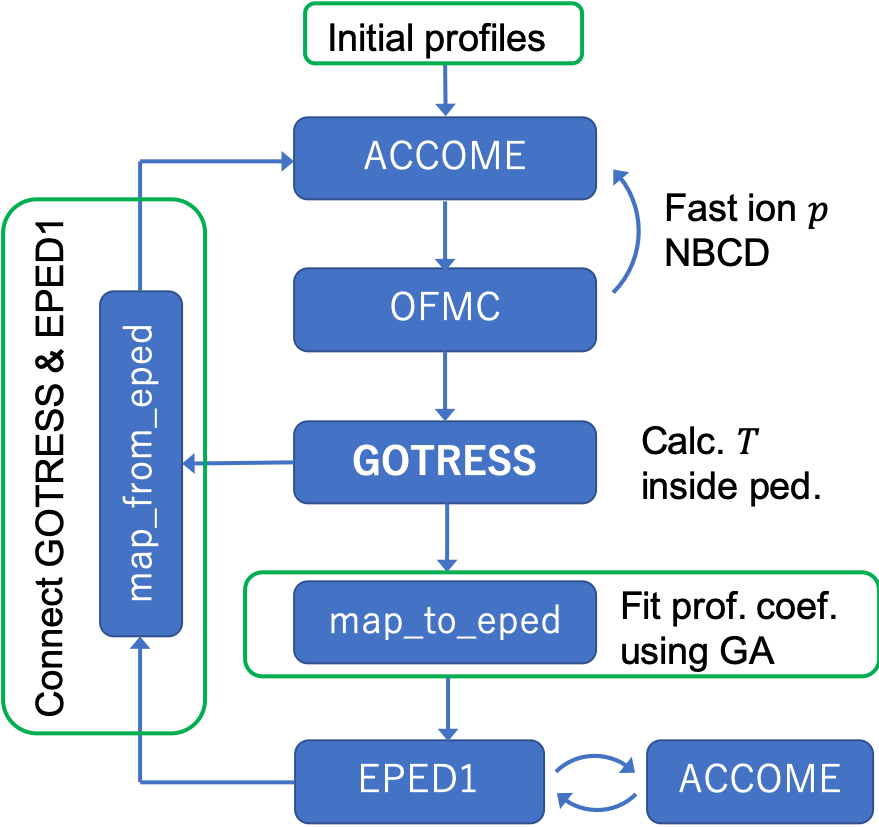 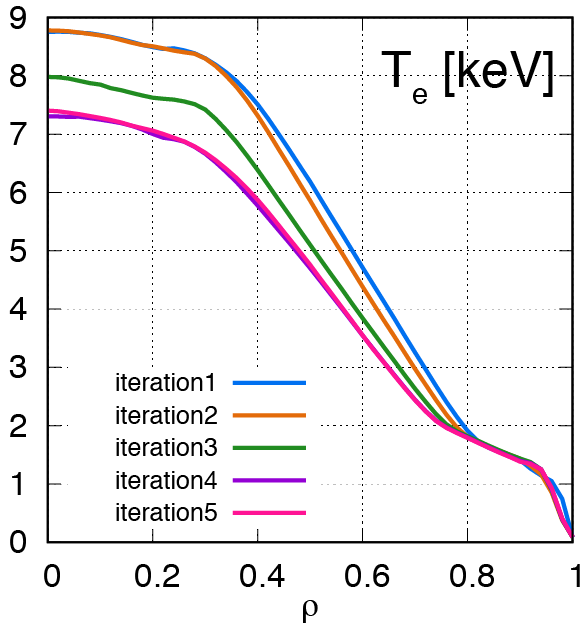