Regulation of the $q$ profile via feedback control has been recently demonstrated in EAST in both L-Mode and H-mode experiments. Extensive studies have shown that the $q$ profile, which is closely related to poloidal magnetic flux profile, is a key factor to achieving advanced-tokamak operating scenarios that are characterized by improved confinement and the non-inductive sustainment of the plasma current necessary for steady-state operation. A general framework for real-time feedforward + feedback control of magnetic and kinetic plasma profiles as well as scalars has been implemented in the EAST Plasma Control System (PCS). Moreover, a first-principles-driven, control-oriented model of the poloidal magnetic flux profile and internal energy evolutions has been used to design feedforward {1} and feedback {2} model-based control algorithms and to tune non-model-based control algorithms in closed-loop simulations. Several of these proposed controllers have been tested successfully in reference tracking and disturbance rejection experiments in EAST. These experiments constitute the first time ever closed-loop $q$-profile regulation has been successfully achieved in EAST.

The controllers have the capability of either regulating several points of the $q$ profile, minimizing the integrated squared error between actual and target profiles, or controlling integral properties such as the internal plasma inductance $l_i$. Moreover, the controllers can simultaneously regulate $\beta_N$, which is another plasma property playing a key role in the access to high-performance, MHD-stable modes of operation. This level of controllability has been achieved in EAST by placing several critical actuators under the PCS command, namely the ohmic coils, two Lower Hybrid Wave (LHW) sources, and four Neutral Beam Injection (NBI) sources. The so-called Profile Control category recently implemented in the EAST PCS, which houses the $q$-profile+$\beta_N$ control algorithms, does not directly control these actuators. Instead, it sends requests for the needed total plasma current and non-inductive powers to the different actuator categories. In order to enable the use of NBI power for $q$-profile+$\beta_N$ control, a pulse-width-modulation algorithm was also implemented in the EAST PCS to convert the power requests from the Profile Control category into on/off time commands for the beams. While this actuator mechanism proved to be too powerful for smooth $\beta_N$ regulation in L-mode discharges, it is anticipated that it can play an important role in H-mode plasmas. Both the $q$ profile at 11 points and $\beta_N$ are passed to the Profile Control category by pEFIT {3}, an equilibrium reconstruction code exploiting the massively parallel processing cores of graphic processing units (GPUs).

Fig. 1 shows feedback regulation of the $q$ profile at three points in space, namely $q(\hat{\rho}=0.1)$, $q(\hat{\rho}=0.5)$, $q(\hat{\rho}=0.9)$, by using the ohmic coils, the low-frequency (2.45 GHz) LHW source, and the high-frequency (4.60 GHz) LHW source as actuators for EAST shot #95183. The target evolutions for the $q$ profile at these three points, which have been obtained from a previous shot to ensure feasibility, are shown in dashed red lines in Fig. 1(a), Fig. 1(b) and Fig. 1(c). The solid magenta lines show the evolutions of the $q$ profile at these points for feedforward-only EAST shot #95176. The feedforward actuation for the plasma current, the 2.45 GHz LHW power, and the 4.60 GHz LHW power, shown respectively in Fig. 1(d), Fig. 1(e) and Fig. 1(f) by the solid magenta lines, is not adequate enough to track the desired targets. This can be appreciated from Fig. 1(a), Fig. 1(b) and Fig. 1(c), where the associated feedforward-only evolutions of the $q$ profile are also shown by solid magenta lines. When feedback control is turned on during shot #95183 for 2s$ 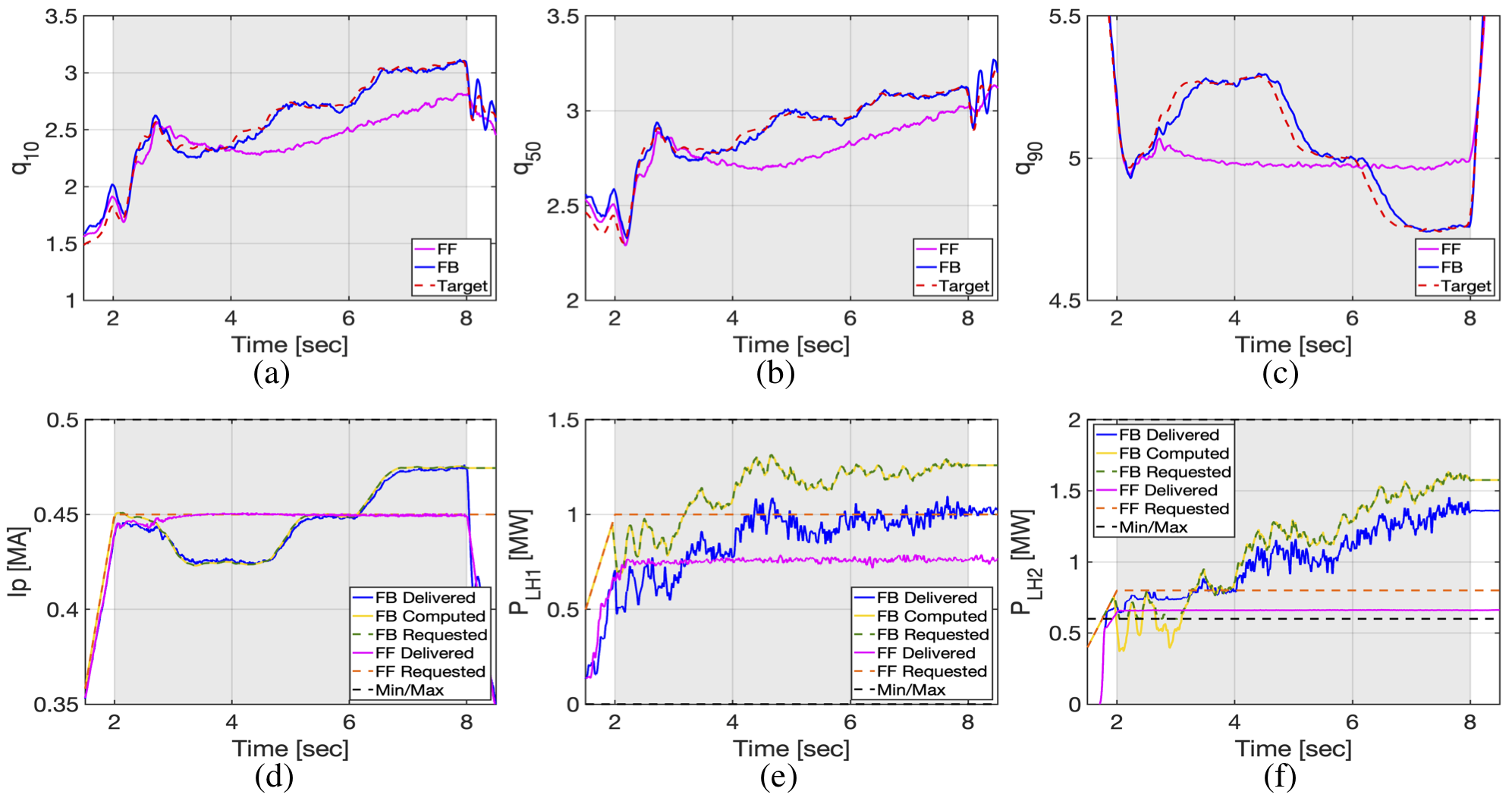 As the number of actuators is increased (by testing the use of NBI power modulation in H-mode plasmas and incorporating the command of ECRF and Ion Cyclotron Range of Frequency (ICRF) H&CDs under the PCS), the quality of the real-time reconstruction is improved (by constraining pEFIT with POlarimeter-INTerferometer (POINT) measurements {4}), and the prediction accuracy of the control-level models used for control design is enhanced (by further developing control-physics understanding and continuing validation efforts), the capability of tightly regulating the $q$ profile and $\beta_N$ will be further augmented in order to routinely enable the access to long-pulse, disruption-free, high-performance operation in the EAST tokamak.

This work has been supported in part by the U.S. Department of Energy under DE-SC0010537.