Experiments on DIII-D and C-Mod show that high neutral opacity is compatible with a steep density gradient at the plasma edge [1,2]. Future reactors, including ITER, will operate at high neutral opacity, which will strongly limit direct fueling of the pedestal structure inside the Last Closed Flux Surface (LCFS) through ionization from edge sources in comparison with current existing experimental devices. At the highest opacities, the electron density pedestal structure is stiff and is not degraded by increases in fueling and Scrape-Off Layer (SOL) density. These experiments directly question integrated modeling predictions for ITER that show high opacity is incompatible with a steep pedestal density gradient inside the LCFS when particle transport is considered purely diffusive [3]. 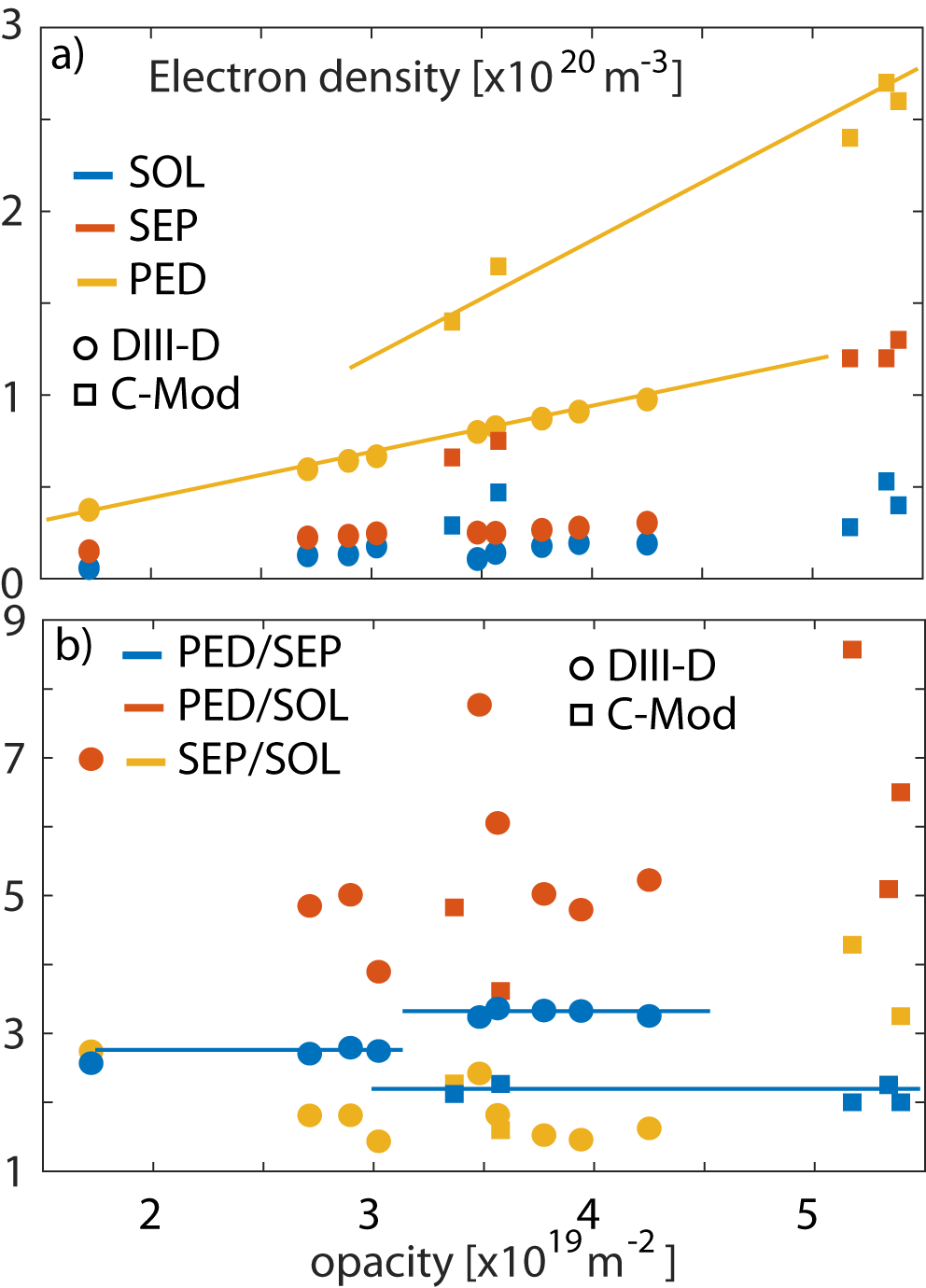 High neutral opacity means that neutrals will ionize predominately inside the SOL, limiting the impact of edge fueling and peaked density profiles, under the assumption of purely diffusive particle transport. To test whether limited edge fueling in high neutral opacity regimes results in the collapse of the pedestal density profile, as predicted by simulations for ITER [3], we conduct a set of experiments on DIII-D and C-Mod in which we increase the neutral opacity. In our experiment we obtained opacity values that are only a factor 2 lower than those on ITER, while current day machines operate typically at opacity values that are about a factor 10 lower than those expected on ITER. Opacity can be approximated using values of the electron density and the minor machine radius, $n \times a$. The experiments on DIII-D and C-Mod ranging in opacity range from $1.5 \times 10^{19} \; m^{-2}$ to $5.5\times 10^{19} \; m^{-2}$ by operating at various plasma currents as well as adding an additional gas puff. Within this span of opacities, both DIII-D and C-Mod have robust density pedestal structures and increases in fueling and opacity did not affect the maximum density gradient on either machine. The max⁡($1/L_{ne}$) on DIII-D remained close $\sim 8 \times 10^{21} \; m^{-4}$ in absolute value for a fixed IP when the opacity was raised using gas fueling. This is also reflected in the fact that $ne_{ped}/ne_{sep}$ remains constant for DIII-D as well as C-Mod over a wide range of opacities, see figure 1b). Thus, suggesting that changes in neutral penetration has little effect upon the pedestal density structure.

Using the filterscope measurements of $D_{\alpha}$ light at the mid plane inside the LCFS as well as in the SOL, we observe that with increasing opacity, there is a decrease in the neutral density especially inside the pedestal structure on DIII-D. Even though direct fueling through ionization of edge neutrals sharply decreases in the pedestal structure, the pedestal density still increases with increasing opacity, see figure 1a). This agrees with SOLPS-ITER modeling of these DIII-D discharges, which also shows a decrease in neutral density, not just at the midplane, when the neutral opacity increases in these experiments.

While opacity does not exclude a robust pedestal density structure, it does reduce our ability to fuel the core plasma using gas puffing. With increasing opacity, the increase in the pedestal density as a function of the additional gas fueling becomes smaller. This observation is again counter to the integrated predictive ITER H-mode simulations, which indicated that there was no saturation observed in the pedestal or separatrix density with increasing gas fueling. These models rely on fixed transport coefficients in the SOL and use a Bohm/GyroBohm approximation for the transport on closed flux surfaces. The increase in fueling in these simulations increases the SOL and separatrix density and the choice of the transport model for the core results in this increase propagating up to the pedestal density.

In DIII-D at the highest fueling levels, when the outer strike point detaches, we observe a saturation in the SOL density increase due to the formation of a density shoulder. A density shoulder is associated with a strong change in radial transport, which cannot be captured by these integrated models or SOLPS-ITER self-consistently [4]. The strong increase in radial outward transport associated with the formation of a density shoulder effectively impacts the ability to increase the separatrix density. As such, fueling an opaque plasma using a gas puff will be very inefficient or even completely ineffective. It does however not result in the collapse of the steep pedestal density.