Dual mode density fluctuations are consistently observed when the L-H transition power threshold is low at higher $q_{95}$ and thus appear to at least partially explain the lower threshold. Long wavelength density fluctuations are measured across the L-H transition at DIII-D using an 8×8 array of Beam Emission Spectroscopy (BES) channels at 0.85<ρ<1. The plasmas were operated in favorable geometry (ion ∇B drifts towards the X-point) in ITER similar shape with balanced torque neutral beam injection. The L-H transitions were obtained with the heating power just above the threshold. As seen in Fig. 1 (a), $P_{LH}$ is reduced at higher $q_{95}$=4.9 at $n_e$~3e19 $m^{-3}$, which is near the $P_{LH}$ density minimum on DIII-D. Ion and electron diamagnetic directed modes are observed to coexist at ρ~0.95-1.0 propagating in different directions as indicated in the wavenumber spectrum (Fig. 1c): a low frequency broadband mode (<10 kHz) propagates in the ion diamagnetic drift direction and a higher frequency mode (>10 kHz) in the electron drift direction (labeled accordingly). A single mode is seen at lower $q_{95}$=3.5 (Fig. 1b).

The two modes observed at $q_{95}$=4.9 appear to be associated with enhanced turbulence Reynolds stress and larger poloidal turbulence flow shear {4}. Linear gyro-kinetic CGYRO simulations with experimental profiles have shown a transition from one mode to two modes as $q_{95}$ is increased consistent with the experimental observations. It is found that $T_i$ profiles strongly impact the ion mode growth rate, even in the pedestal region. On ASDEX-U and C-Mod, a critical ion heat flux has been reported to be necessary for L-H transition {5,6}. This critical ion heat flux may be related directly to the edge ion temperature gradient, which is observed here to strongly impact the ion mode.

An increase of turbulence Reynolds stress and turbulence flow shear is observed when the ion ∇B drift changes from unfavorable to favorable by scanning the dRSEP parameter, the radial distance between the upper and lower divertor separatrices at the outboard midplane. As seen in Fig. 2, three 20 ms time windows are analyzed during the dRSEP scan approaching the L-H transition. At earlier time around 1500 ms, which is in unfavorable direction, turbulence Reynolds stress measured with BES is very small. However as it changes towards the favorable direction approaching the transition (1960 ms-1980 ms), Reynolds stress is significantly increased. Consistently, poloidal turbulence flow increases and such increase is mainly in the plasma edge region at ρ~0.95-1.0. Toroidal field, plasma current and input power are kept constant during the process and there is little change in the edge plasma profiles of density and temperature. The turbulence amplitude decreases approaching the transition. 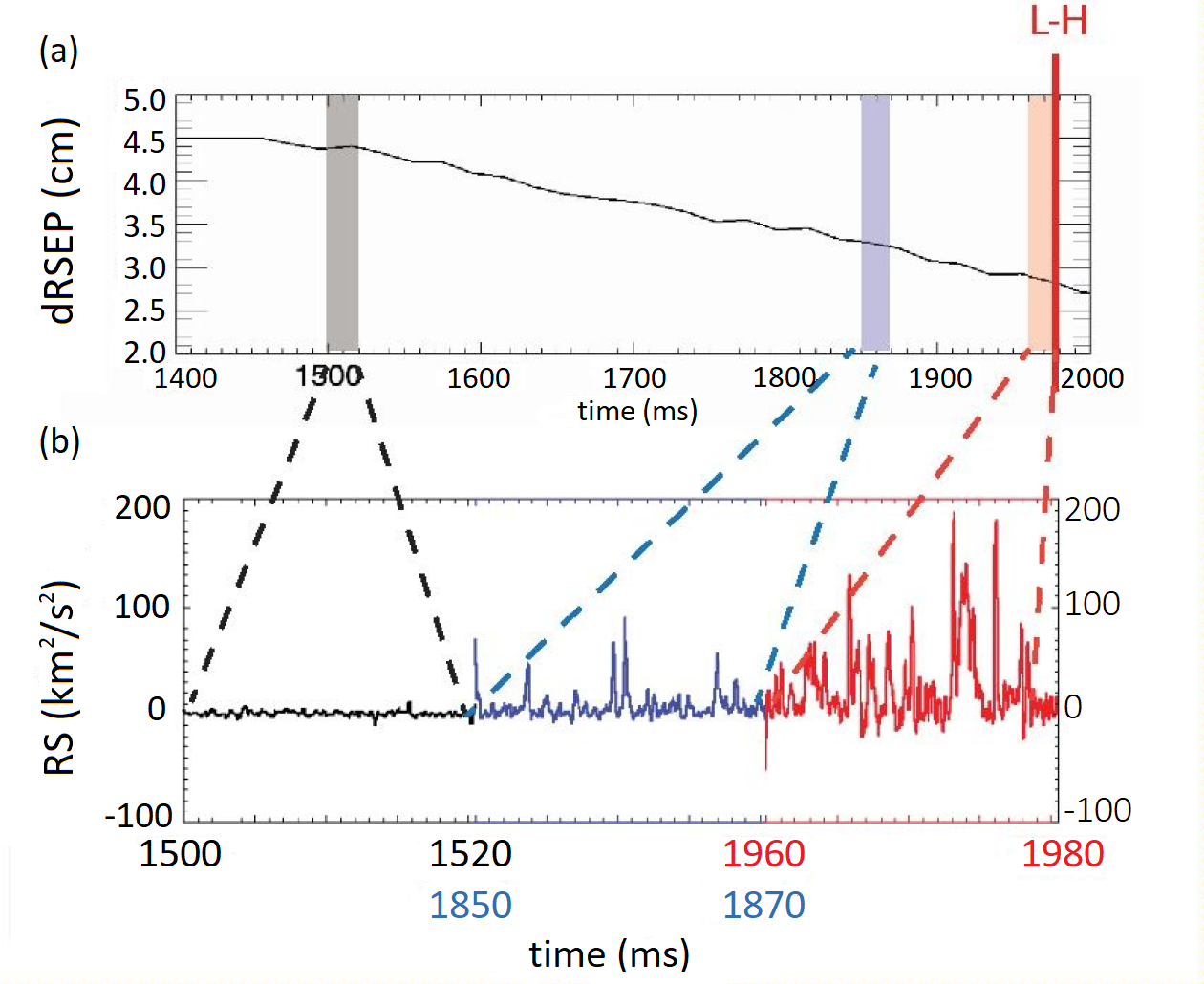 Application of RMP at a magnitude required to suppress ELMs has been observed for the first time to raise the turbulence decorrelation rates and reduce Reynolds stress driven flow shear. It has been observed from multiple experiments and across multiple devices that RMP increases L-H transition power threshold. The turbulence decorrelation rate (Δω$_D$) measured with BES in the plasmas with and without MP application is shown in Fig. 3(a).

It is found that Δω$_D$ increases by 50% across ρ~0.9-1.0 when RMP is applied. It is simultaneously observed that the Reynolds force and turbulence flow shear are significantly reduced when RMP is applied (Fig. 3(b) and (c)). These increases in Δω$_D$ and reductions in the flow shear rate disrupt the turbulence suppression mechanism. It is also found that the application of RMP reduces transient kinetic energy transfer from turbulence to the flow approaching the L-H transition {2}. When non-resonant MP is applied, little change in the decorrelation rate has been observed, and the turbulence Reynolds stress and flow shear exhibit less reduction, which is consistent with the much reduced impact on the L-H transition power threshold with non-resonant MP compared with RMP.