Impurity seeding studies were performed for the first time in the slot divertor at DIII-D, showing that with suitable use of radiators, full detachment is possible without degradation of core confinement. First ever multi species SOLPS-ITER simulations including full cross-field drifts and neutral-neutral collisions in DIII-D demonstrate the importance of target shaping and plasma drifts on reducing impurity leakage. In addition to advancing our understanding of SOL impurity transport, these results show that neutral and impurity distributions in the divertor can be controlled through variations in strike point locations in a fixed baffle structure. This leads to enhanced divertor dissipation and improved core-edge compatibility, which is essential for ITER and for the design of any future fusion reactor.
This work demonstrates the impact of both target shaping and impurity species on the detachment onset, impurity leakage and pedestal characteristics. Experiments comparing nitrogen and neon seeding highlight that Ne dissipates further upstream than N, consistent with their difference in ionization potential and with neon leading to a higher pedestal pressure gradient. The results from these experiments are also crucial to show that the detachment front is not a purely local phenomenon, but it extends through the entire slot divertor. This study has been enabled by unprecedented diagnostic coverage in the closed divertor, which enabled multiple independent observation of plasma cooling evolution. The experimental data show strong dependence of detachment and impurity leakage on strike point location. For a database which includes power and density scans, the detachment onset consistently requires half the nitrogen amount when the outer strike point (OSP) is on the slanted inner surface, compared to the outer corner of the slot. Relative nitrogen contamination levels are reduced by 15-20% in the core under these conditions, as measured by the Charge Exchange Recombination Spectroscopy and independently confirmed by core SPRED measurements of N-IV, when the OSP is on the slanted inner surface (fig. 1a and 1b). 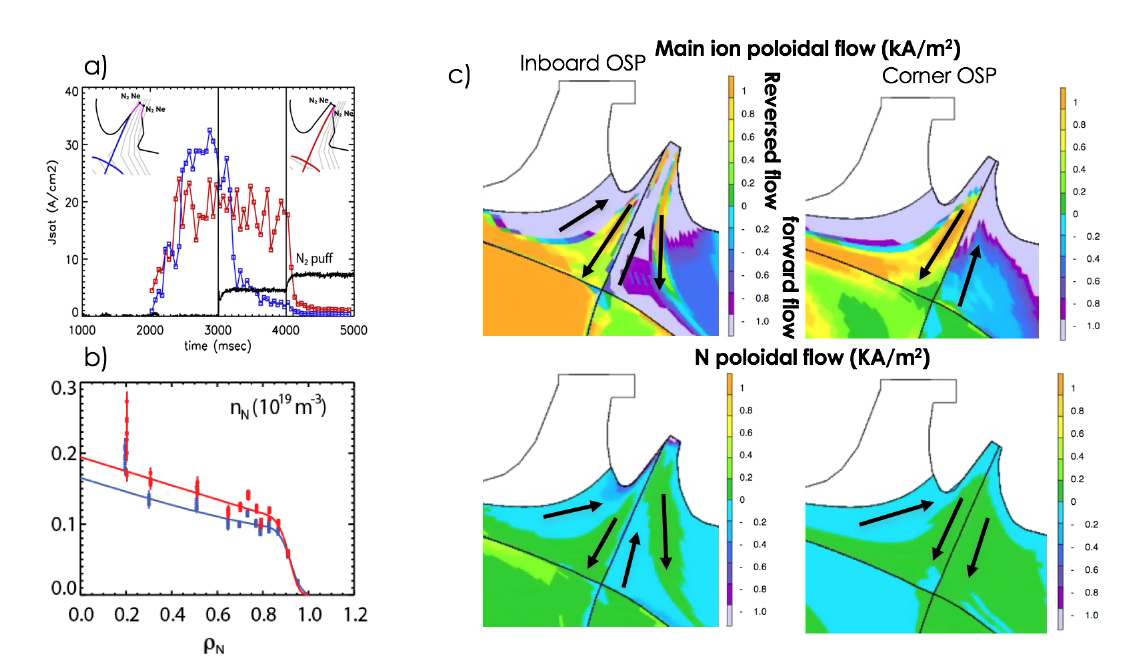 Insight on these experiments has been obtained by employing for the first time in DIII-D SOLPS-ITER simulations with D+C+N, drifts and n-n collisions activated. The modeling results highlight the impact of target shaping on the ionization source distribution. When the OSP is at the inboard surface, the resulting wetted target is different than with the OSP at the outer corner, thus resulting in different distributions of the ionization source.The inclusion of the drifts in the simulations enabled to study the behavior of these flows in a highly closed divertor showing the relevant role of convection on divertor asymmetry and divertor detachment. With the ion BxB directed into the divertor as in this work, drifts shift the recycling source radially towards the inner target. As such the recycling source is affected by the superposition of the closure effect and plasma drifts. This results in a redistribution of plasma flow in the SOL and divertor plasma, altering plasma profiles and shifting the parallel pressure balance between upstream and downstream. Flow reversal is found for both main ions and impurities affecting the SOL impurity transport and explaining the dependence on strike point location of the detachment onset and impurity leakage found in the experiments (fig. 1c).

In addition to target shaping, the effect of different radiative species on power dissipation has been evaluated experimentally by replacing nitrogen with neon. The results show that Ne dissipates further upstream than N and thus removes the capability of the divertor to dissipate as confirmed by calculations using the 2-point model. The crucial implication is that for a fixed Te at the target, less SOL density is required with Ne which could be attractive from a core-edge integration point of view.
The two routes for dissipation we identified in the work (using N through divertor radiation and with Ne radiating mantle upstream) lead to different pedestal responses. While N does not significantly affect the profiles, Ne injection leads to an increased pedestal gradient (fig. 2). 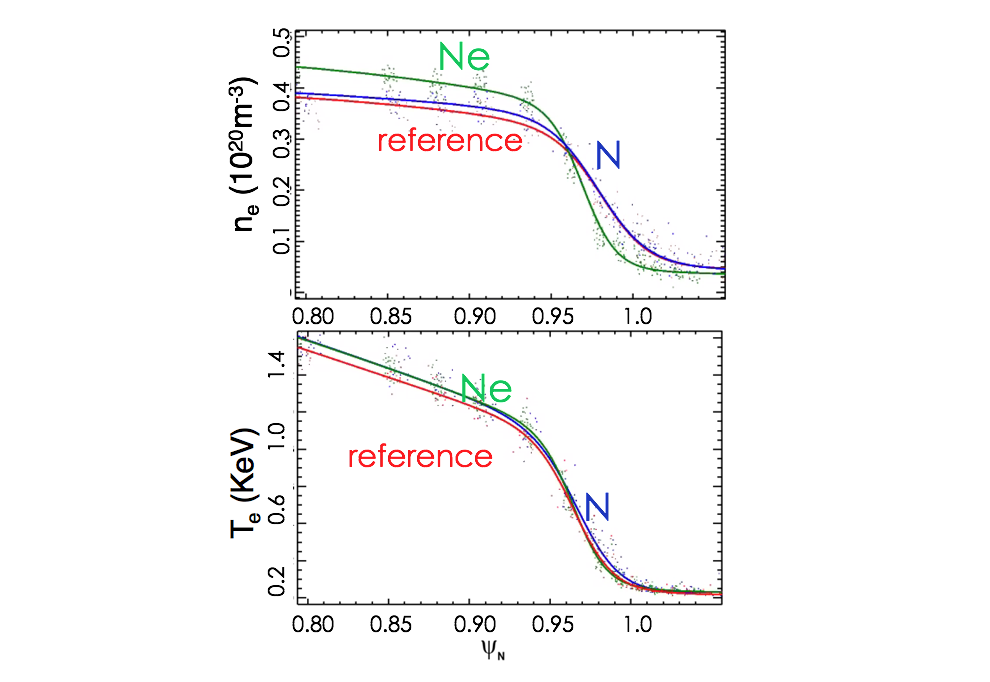 These results are linked to the interesting observation that while neon readily enters the pedestal, nitrogen remains compressed in the divertor. This different leakage behavior between the two impurities is consistent with the higher ionization potential for Ne (21.6 eV) compared to N (14.5 eV), resulting in ionization further upstream from the target. Neon injection leads to an improved peeling-ballooning stability due to increased diamagnetic stabilization. Moreover, a self-enhancing mechanism of Ne build up has been identified as due to the increased pedestal stability and the radiative mantle. The understanding of SOL and pedestal changes associated with Ne injection as shown here is crucial to evaluate the use of neon as radiative impurity in future reactors. The findings of this work demonstrate that mitigated divertor heat flux with impurity seeding balancing core contamination, can be obtained by choosing appropriate radiative species for pedestal conditions, as well as by optimizing divertor geometry and tailoring drifts for particle entrainment.
Work funded by the US DOE under Awards DE-FC02-04ER54698 (DIII-D), DE-AC52-07NA27344 (LLNL), DE-AC02-09CH11466 (PPPL), and DE-AC05-00OR22725 (ORNL), DE-NA0003525 (SNL) and LDRD project 17-ERD-020.