Detachment control tests at DIII-D and EAST have expanded to new sensors and integration with high confinement ($H_{98,Y2}$≈1.5, $\beta_N$=3) core scenarios (see $^1$ for details on core performance). Active detachment control protects the divertor target from extreme heat fluxes and temperatures which might otherwise cause melting and erosion while minimizing fuel or impurity seeding commands to what is required and thus mitigating core performance degradation. Using Langmuir probes (LPs), saturation current normalized to its value at rollover can be controlled in the range $J_{sat}/J_{roll}$ > 0.3, including tracking of target values that step or ramp. Additionally, triple probe tips at EAST measure Te, which is controllable for $T_e$ ≳ 3 eV, with the exception of dithering across the $T_e$ cliff.$^2$ Identification of the system by fitting the response of $J_{sat}$ or Te to gas puffing leads to two things: estimates for initial proportional-integral-derivative (PID) gains for the controller, and a discrepancy between the classic system models tested and the actual behavior. The inability of classic system models to adequately describe the response to gas puffing suggests that future work in detachment control should focus on a control-oriented reduced model and Model Predictive Control (MPC).

LPs have been demonstrated to be effective sensors for detachment control systems at DIII‑D and EAST, with a variety of puffing gas species as the control actuators. These results go beyond the original demonstration of LP control at JET$^3$ by using Te from triple LPs at EAST, testing the controller with D$_2$, CD$_4$, N$_2$, Ne, and Ar puffing, and integrating detachment control with high confinement core scenarios on both devices.$^1$ The $J_{sat}$ rollover detection logic at DIII-D also goes beyond previously reported results by allowing detection of roll-back-over or reattachment; the controller should always know which side of rollover it is on. This is important for coping with off-normal events because the system gain changes sign as $J_{sat}$ crosses the rollover point. An advantage of using LPs over Divertor Thomson Scattering (DTS) as the sensor as in previous DIII-D detachment control demonstrations$^2$ is that LPs typically have much greater spatial coverage. The $J_{sat}$ controller has demonstrated ability to track targets in the range $J_{sat}/J_{roll} \geq$ 0.3, including ramps, steps, and constant values (an example is shown in Figure 1). The EAST $T_e$ controller has been successfully operated at a variety of $T_e$ values (Figure 2) and has been used as a tool in detachment studies. 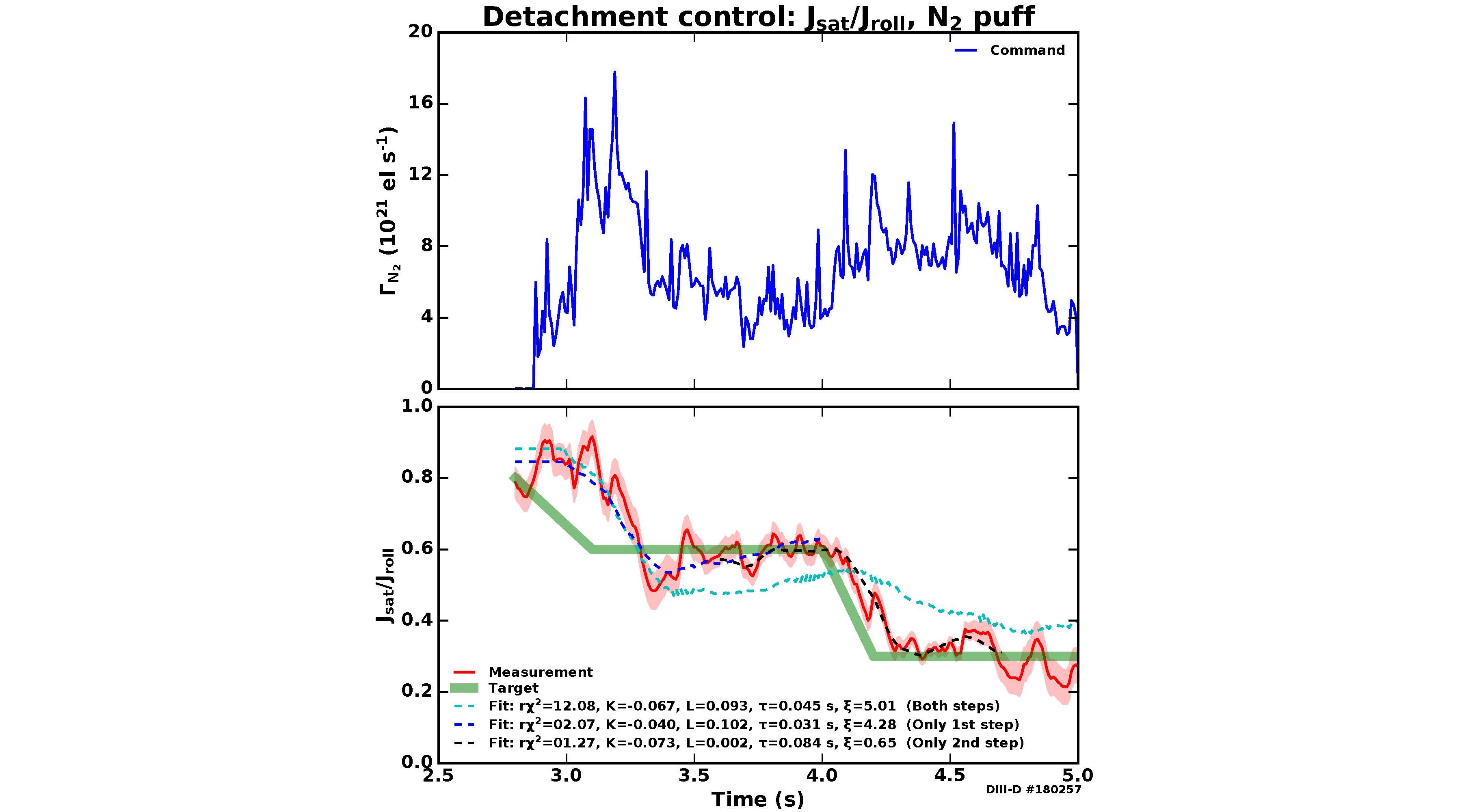 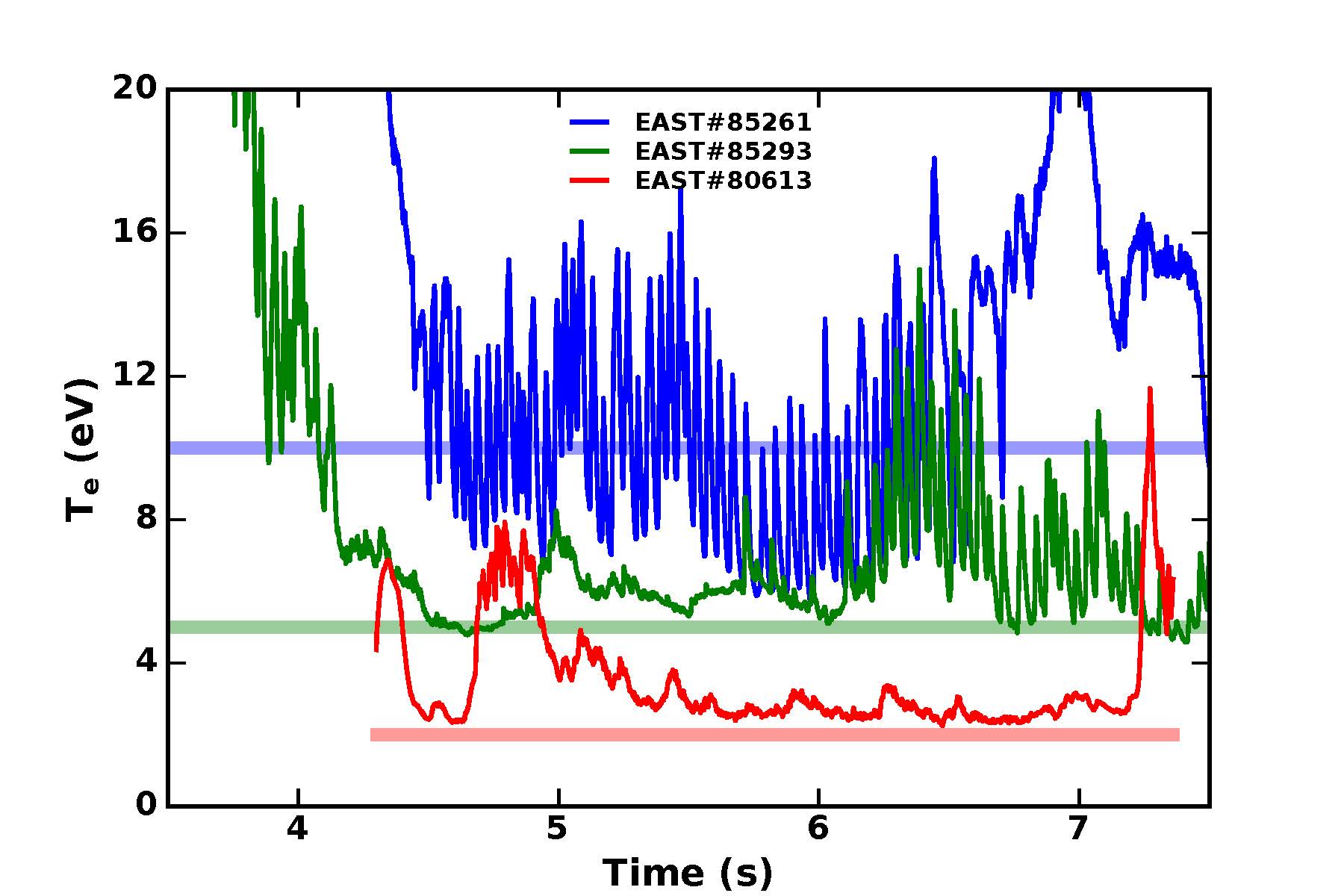 Detachment control is useful for supporting core-edge integration since it keeps gas puffing down to the minimum needed to reach the target. Detachment control experiments have achieved $H_{98,y2}$ > 1 at EAST and $\approx$1.5 at DIII-D. It is typically not challenging to avoid overshooting the target with this controller with appropriate tuning of the full PID system (PI-only can be effective as well) and a realistic target trajectory. That is, best results are found when abrupt steps in the target are replaced by transitions over a time period similar to the system dead time plus response timescale, or about 100-200 ms, as in Figure 1.

System identification of the $J_{sat}$ controller (which has been tested more aggressively) with a First Order Plus Dead Time (FOPDT) or second order (SOPDT) model is sensitive to the absolute value of $J_{sat}/J_{roll}$, meaning the optimal tuning for going from 0.8 to 0.5 is not the same as the optimal tuning for going from 0.5 to 0.3. Figure 1 shows a case where the target $J_{sat}/J_{roll}$ decreases in two steps and then is held at a constant value after each. When the whole history is fit to the SOPDT model (which extends FOPDT by adding damping), the response is underfit with reduced $\chi^2$=12. When the fit is restricted to a time window surrounding a single step, the model provides a much better description of the response with reduced $\chi^2$ of 1 or 2. The separate fits have different parameter values. The problem can be linearized locally over a small enough step, but a small enough step appears to be $\Delta J_{sat}/J_{roll} \approx$ 0.2, whereas the controller should be able to handle attachment down to deep detachment, or $J_{sat}/J_{roll} \approx$ 1. Additionally, classic formulae for calculating PID gains from FOPDT identification, such as the Ziegler-Nichols rule, consistently need fine tuning by hand for best performance. This is consistent with FOPDT and SOPDT being inadequate descriptions of the system. So, PID is not the optimal method for controlling this system if the PID gains need to be functions of the target value of $J_{sat}/J_{roll}$. Future work should implement MPC to produce a more effective and more general tool, but the difficulty is in obtaining a suitable reduced model for the system.

ITER will need an active detachment control system to protect its divertor plates. Detachment control tests on present-day devices aim to demonstrate ITER-relevant control schemes or identify critical research needs. Work so far on DIII-D and EAST shows that LPs, DTS, and radiated power measurements are adequate sensors for managing fuel or impurity puff commands in a narrow operating space, and that the algorithms must be improved in order to handle more general conditions. This work was supported in part by the US Department of Energy under DE-FC02-04ER54698.