Concepts of the power exhaust and divertor design have been developed, with a high priority in the pre-conceptual design phase of the Japan-Europe Broader Approach DEMO Design Activity (BA DDA). A common critical issue is the large power exhaust in the main plasma and divertor by the radiative cooling with impurity seeding. (i) Different power exhaust concepts in the main plasma and divertor have been developed for JA and EU DEMOs, and divertor operations were systematically determined by simulations (SONIC and SOLPS-ITER). In addition, effect of the different geometry on the plasma detachment was compared for comparable exhaust power of $P_{sep}$ ~150 MW. (ii) Integrated designs of the heat removal components and cassette structures have been developed. (iii) Both divertor designs are adequate to handle the peak heat loads on the target ($q_{target}$) of 10 $\rm MWm^{-2}$ level under neutron irradiation condition. These approaches will provide important case-studies for future improvement of their DEMO designs. 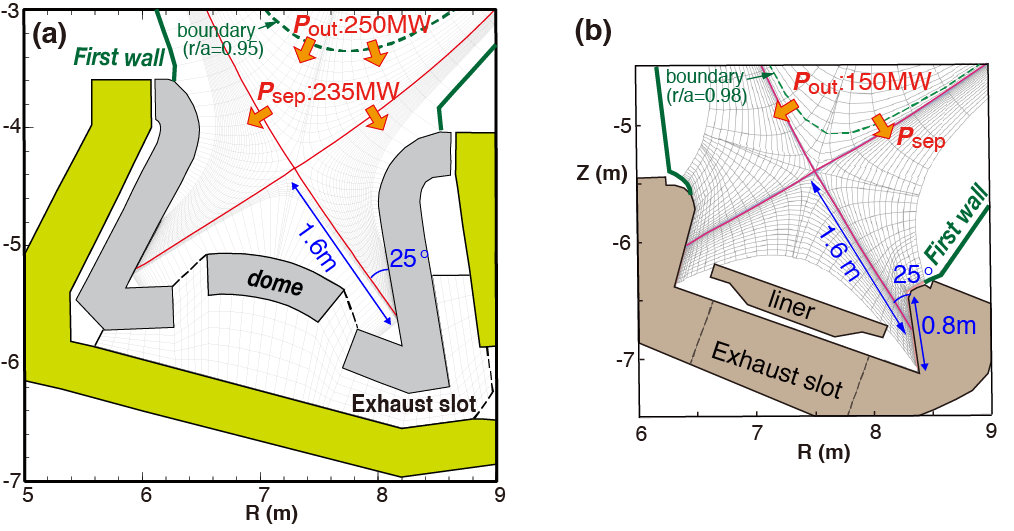 Similar divertor length (1.6m) longer than ITER (1 m) was proposed by both as shown in Fig. 1, and simulations were performed by SONIC (JA) and SOLPS (EU) codes. The JA-DEMO divertor covers below the X-point, and appropriate divertor operation (peak $q_{target}$ $\leq$10 $\rm MWm^{-2}$) was achieved in the baseline scenario with $P_{sep}$ ~235 MW and $f_{rad}^{sol+div}$ (= $P_{rad}^{sol+div}$/$P_{sep}$) ~0.78 in the low $n_e^{sep}$ range (circles in Fig.2(a)) [A]. Recent study on severe divertor operations, i.e. higher $P_{sep}$ ~283 MW (squares) and lower $f_{rad}^{sol+div}$ ~0.66 (triangles), systematically understood the partial plasma detachment and operation restrictions. The peak $q_{target}$ seen in the attached plasma region is increased with $P_{sep} – P_{rad}^{sol+div}$, because of reducing detachment width and increasing local $T_e^{div}$ and $T_i^{div}$ as shown in Fig.2 (b)(c). For the baseline and the higher $P_{sep}$ cases, the divertor operation is acceptable. For the lower $f_{rad}^{sol+div}$ case, high $n_e^{sep}$ $\geq$ $\rm 2.3x10^{19} m^{-3}$ is required.
The EU-DEMO divertor removed the baffles, and only covered the target plate near the strike point, which was rather open and disadvantage for neutral compression compared to those of ITER and JA-DEMO. The peak $q_{target}$ and $T_e^{div}$ appeared near the separatrix, and the plasma performance was recently simulated for the baseline $P_{sep}$ (150MW) and severe (200 MW) cases as shown in Fig. 2(d). While reduction in $q_{target}$ ($\leq$10 $\rm MWm^{-2}$) is achieved in relatively low $f_{rad}^{sol+div}$, further increases of $f_{rad}^{sol+div}$ ( >0.75 and >0.9 for the baseline and severe cases, respectively) are required to reduce $T_e^{div}$ lower than 5 eV for minimizing target erosion at large plasma fluence. Feasible divertor operation is expected for the ITER-like $P_{sep}$/$R_p$ case.
For comparison, plasma performance in the JA-DEMO divertor with the same $P_{sep}$ ~150 MW was simulated; a partial plasma detachment was produced even at lower $f_{rad}^{sol+div}$ ~0.6, and the peak $q_{target}$ was reduced to 7 $\rm MWm^{-2}$. Figure 2(e) shows that $T_e^{div}$ at the attached region is increased to ~20 eV comparable to EU DEMO, but net erosion is not severe due to lower fluence. These results suggested that long leg divertor (1.6m) is appropriate for both DEMO baseline concepts, and the closure divertor geometry is more efficient for the large power exhaust.

Design concept and issues of the DEMO divertor
Application of the ITER target technology, i.e. tungsten (W) armor and Cu-alloy heat sink (pipe), and appropriate cassette structure to high neutron irradiation condition in DEMO have been developed for the both designs. Particularly, material property degradation of the CuCrZr pipe and Cu-interlayer is anticipated at the neutron dose of 1-2 dpa. For the JA-DEMO divertor, neutron irradiation to the CuCrZr pipe is reduced by the closure geometry as shown in Fig. 3(a), and the high temperature water of $T_{coolant}$ = 200˚C is used to reduce the irradiation embrittlement. RAFM (F82H) steel pipe is used for the heat sink for the baffles, dome and reflectors. Since the neutron irradiation on the CuCrZr and the interlayer will be higher in the open geometry of the EU divertor (Fig. 3(b)), high heat flux components reinforcing the ITER technology based on W and Cu-alloy have been developed [C], and recently tested successfully in a high-heat flux facility under repeating 20 $\rm MWm^{-2}$ with $T_{coolant}$ of 130˚C. Lifetime issues of Cu-alloy and RAFM steel of the DEMO divertor are summarized. Common and specific issues in their design concepts such as their cassette structures (RAFM steel) and nuclear heat cooling are also shown.