To ensure the leak tightness against any gas or liquid fluids, the compressive load of ~0.54 MPa is applied in the direction perpendicular to the joint interface of GlidCop®/GlidCop® and SUS/GlidCop® during a brazing heat treatment. Figure 2 shows the optical microscope images of GlidCop®/GlidCop® and SUS/GlidCop® joints. Very thin bonding/diffusion layer without any cavities and cracks are confirmed. The mechanical strength of those joints are tested by three-point bending tests. The yield strength of GlidCop®/GlidCop® and SUS/GlidCop® joints are ~350 MPa and ~280 MPa, respectively. These values are slightly lower than that of the GlidCop® bulk (~380 MPa). The two important phenomena are accompanied with this AMSB as follows. The first phenomenon is that a limited volume of the GlidCop® surfaces near the joint interface are melted during the bonding heat treatment phase at 960˚C due to the eutectic reaction of the Cu-P system. Therefore, at the moment of satisfying the liquid phase condition, mutual diffusion or mixing of each melted material occurs. Then, after finalizing the solidification, a tight bonding layer can be created without any cavities and cracks. This phenomenon resembles the micro-scale welding. The second phenomenon is that the microstructures of the joints show almost direct bonding interface of GlidCop®/GlidCop®, SUS/GlidCop® and W/GlidCop®. Thus, multiple brazing processes were successfully completed without any microscopic change.

Such an AMSB fabrication process has already been tested, and some types of the prototype components have been successfully produced. One of the most superior advantages of AMSB is that the complex shape fluid (cooling) flow path can be created in the GlidCop® heat sink. Figure 3 shows a schematic of the two kinds of prototype AMSB divertor heat removal components with the rectangle shaped fluid flow path and the V-shaped staggered rib structure (2). In the case of the type I component, GlidCop®/GlidCop®, SUS/GlidCop® and W/GlidCop® joint are fabricated by the AMSB process. In the case of the type II component, on the other hand, the SUS/GlidCop® and W/GlidCop® joints are fabricated by the AMSB process. The photograph of the type II component is also shown in Figure 3. The heat removable capability under the reactor relevant condition is currently being tested for both structures by using the electron beam device (ACT2) with water cooling. For the first experiment, a steady state heat loading test was carried out for the type II component up to the ~30 MW/m2. Inlet pressure, flow rate and temperature of the cooling water were selected for ~0.5 MPa, ~15 L/min and ~15 °C, respectively. The heat loading area was drawn in the photograph of Figure 3. The thermocouples from CH1 to CH 9 were embedded in the positions shown in Figure 3. Figure 4 shows the temperature profile of CH 4~6 during a heat loading for the case of experiment and simulation. Those temperatures, up to ~30 MW/m2, are quite acceptable for this component from the viewpoint of structural reliability. The AMSB component showed an extremely high heat removal capability under the reactor relevant condition. One should note that the experiment temperatures of CH 5 and 6 showed similar value and gradually deviated towards the lower side with increasing the heat load (over ~15 MW/m2) against the simulation of “fluid finite element analysis (ANSYS CFX)”. Although the simulation does not include nucleate boiling effects of water, some heat removal enhancement might have been caused due to the synergistic effects of turbulent flow and fine-scale local nucleate boiling in the experiment (2). 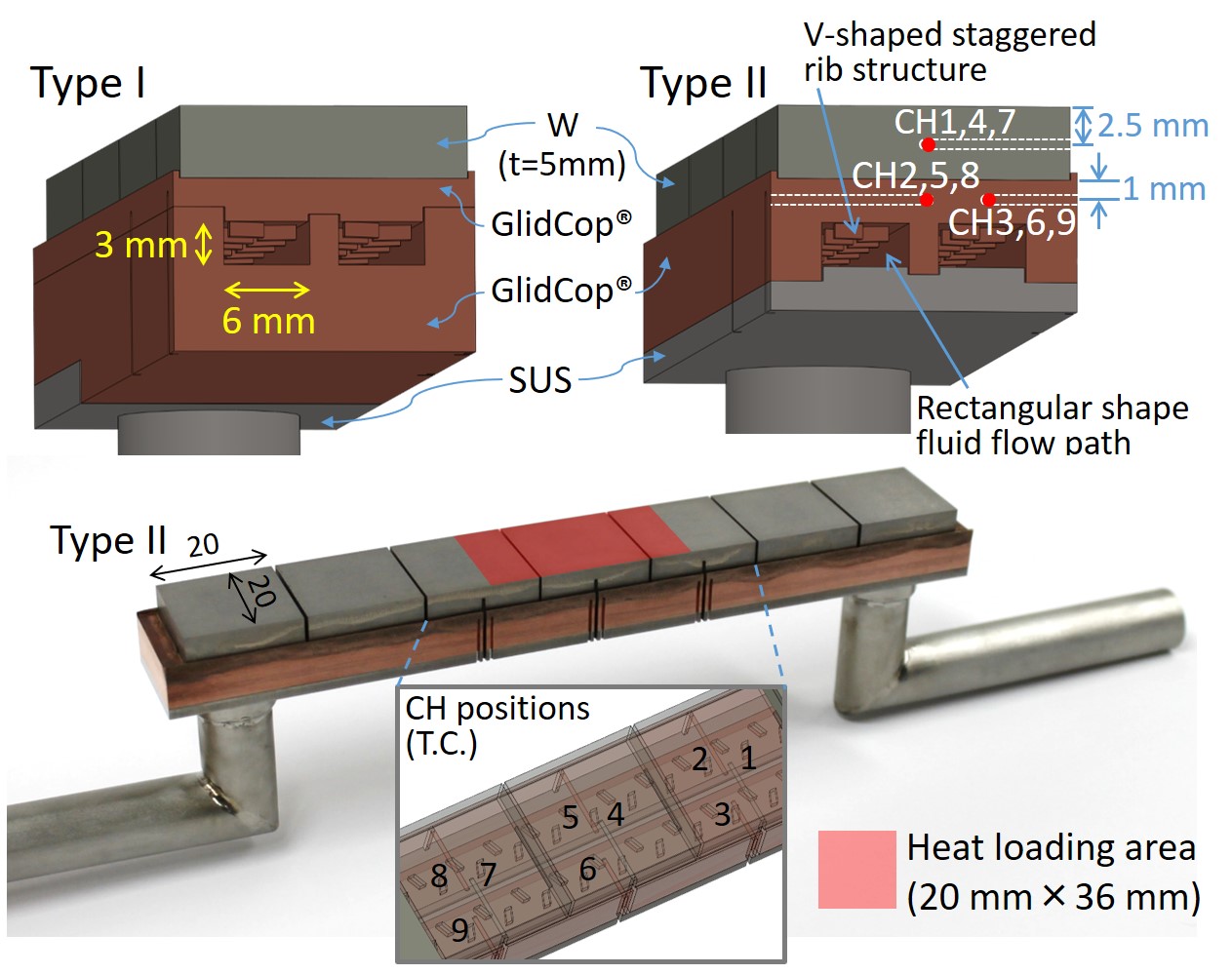 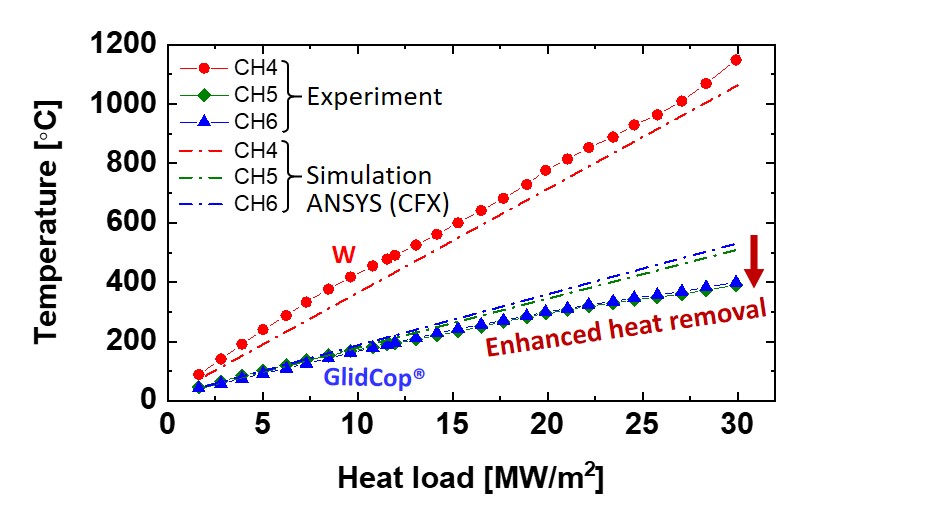