Achieving ignition and high fusion yield in the laboratory is a central goal of the U.S. Inertial Confinement Fusion (ICF) Program. Three major and credible approaches are currently being pursued: laser indirect-drive (LID), laser direct-drive (LDD), and magnetic direct-drive (MDD). While the three approaches use very different means for driving a spherical or cylindrical implosion that can compress and heat a mass of deuterium-tritium (DT) fuel (by laser-generated radiation drive, direct laser irradiation, or direct magnetic acceleration, respectively), they share many common challenges, including how to efficiently couple the kinetic energy of the implosion to internal energy of the fuel at stagnation, and how to assemble the fuel at the necessary conditions, in pressure, temperature, and areal density to initiate self-heating and ignition.
Significant progress has been made in each of these approaches in recent ICF experiments on the National Ignition Facility (NIF) at Lawrence Livermore National Laboratory, the OMEGA laser facility at the Laboratory for Laser Energetics, and the Z pulsed power facility at Sandia National Laboratories. This includes progress in both advancing the absolute fusion output and, as importantly, improving our knowledge and understanding of the implosion behavior and causes of deviations from ideal or theoretical performance.
In this overview, we will review some of the major results from each facility, with a particular focus on recent advances in diagnostic measurement techniques and analysis that have improved our understanding of the states of the assembled fuel and confining shell at stagnation. Particular emphasis is placed on recent advances in determining the 3D spatial morphology and thermodynamic properties of the fusion fuel, including pressure, temperature, areal density, and mix, that determine the degree of alpha-particle production, confinement, and self-heating, and proximity to ignition.
As an example, Fig. 1 shows the hot spot temperatures and areal densities inferred from some of the principal LID experimental campaigns performed on the NIF since 2011. Improved performance can be observed as the implosion design evolved from the original low-adiabat† (a~1.6) CH ablator design (2011-2013), to a mid-adiabat (a~2.3) CH design (2013-2015), and then to a mid-adiabat (a~2.7) high-density-carbon (HDC) ablator design (2016-2019) [1-3]. The principal gains resulted from improved hydro-instability at higher adiabat, and improved energy coupling and implosion symmetry with HDC designs. As of today, the highest performing HDC implosions have achieved hot spot temperatures of ~4.5 keV, hot spot areal densities of ~0.3 g/cm2, hot spot pressures of ~350 Gbar, and fusion energy output of >50 kJ. At these conditions, the self-heating of the hot spot by alpha-particle deposition is estimated to be amplifying the total fusion output by a factor of ~2.5-3x. As can be seen in Fig. 1, these conditions are now quite close to the static self-heating boundary, dT/dt>0, where for a static hot spot at the time of peak compression, the time derivative of temperature is positive due to alpha-particle heating exceeding energy losses from radiation and thermal conduction. Whilst reaching this boundary will be a very noteworthy physics achievement, it is not a sufficient condition for ignition. For ignition, the alpha-heating rate must exceed all losses including mechanical work from expansion of the hot spot after peak compression. This condition, equivalent to the requirement d2T/dt2>0, depends on the shell confinement and necessitates on the order of a ~1 keV higher hot spot temperature [4,5].
In the LDD approach, remarkable progress has been made using a data-driven statistical mapping model to optimize input laser and target parameters that has led to a 3x increase in neutron yield over the past two years on OMEGA [6]. The best-performing spherical direct drive (SDD) implosion has a hydrodynamically-scaled predicted fusion yield in the 0.5 MJ range at NIF laser energy, approaching the burning plasma regime. Polar direct drive (PDD) implosions and laser-plasma coupling research are performed on OMEGA and the NIF for the LDD approach [7,8]. In the MDD approach, recent magnetized liner inertial fusion (MagLIF) experiments on Z have produced record yields and stagnation parameters through steady enhancements in the target initial magnetization, laser preheat energy delivered to the fuel, and electrical current delivered to the imploding shells [9]. In addition to record fusion performance, MagLIF implosions have also demonstrated significant potential for DT alpha-particle confinement and stopping via the strong magnetic fields entrained in the fuel [10,11], a necessary requirement for self-heating and ignition.
This work was performed under the auspices of Lawrence Livermore National Security, LLC (LLNS) under Contract DE-AC52-07NA27344, the Sandia National Laboratories, a multi-mission laboratory managed and operated by National Technology & Engineering Solutions of Sandia, LLC, a wholly owned subsidiary of Honeywell International Inc., for the U.S. DOE NNSA under contract DE-NA0003525, and upon work supported by the U.S. DOE NNSA under Award Number DE-NA0003856, the University of Rochester, and the New York State Energy Research and Development Authority.
† The adiabat is the ratio of the pressure of the DT fuel to the Fermi degenerate pressure. 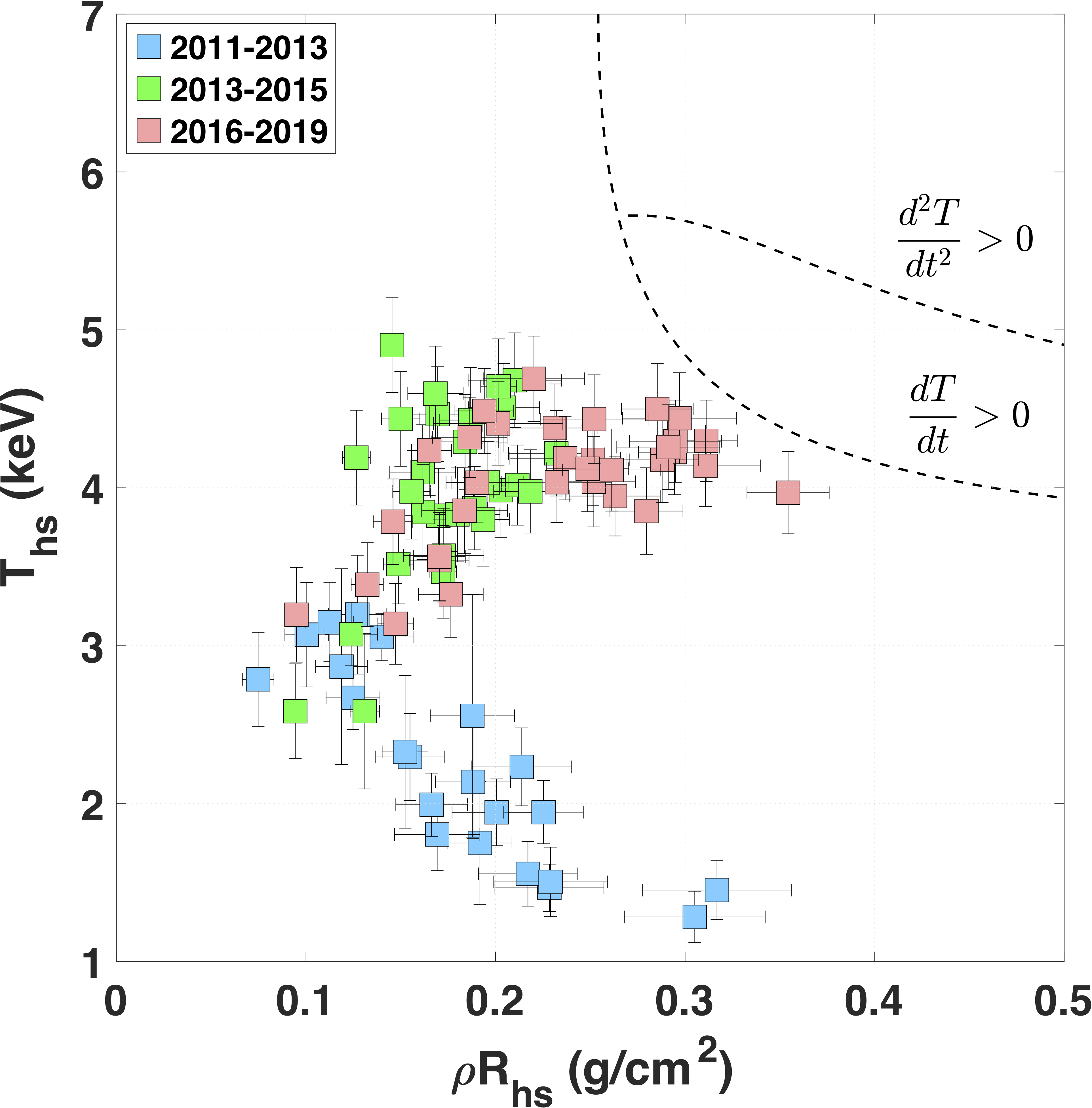