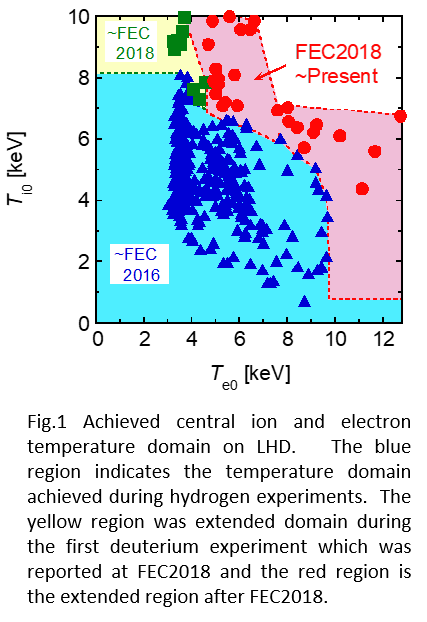 The isotope effect is a long underlying mystery in plasma physics because the most of experimental observations in tokamak plasmas show favorable effect by the ion mass on the energy confinement time (tau_E) while the theoretical prediction based on the gyro-Bohm model shows unfavorable effect by the mass, i.e., tau_E~ M^-1/2. A series of dedicated experiment using dimensionally similar L-mode hydrogen and deuterium plasmas in LHD showed that the energy confinement time scaling for L-mode plasmas had a non-significant dependence on mass (M^0.01) 2. On the other hand, a clear isotope effect was observed for the formation of Internal Transport Barrier (ITB) in LHD as shown in Fig.2. Here, the profile gain factor G1.0 is defined as

and TLref is the expected temperature profile for L-mode plasmas with same heating condition 3. As shown in the figure, the ITB intensity, i.e., G1.0, is clearly larger for deuterium at the density range below 2x10^19 [m^-3]. 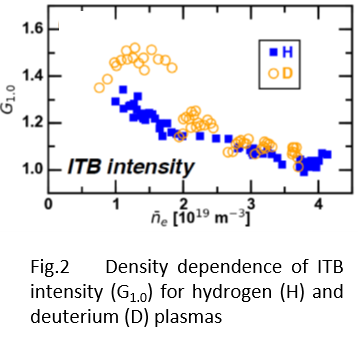 The realization of both divertor heat load mitigation and the good core confinement property is an important issue in developing future reactor scenarios. For divertor detached deuterium plasmas which are realized by the RMP application, we have succeeded to improve the confinement of 38% with a formation of ETB. Thus, we call this improved confinement mode as the RMP induced H-mode 4. As shown in Fig.3, a steep pressure gradient was formed in deuterium plasmas at the edge region inside the m/n=1/1 island which was produced by the RMP. This formation of the steep edge pressure gradient with the detachment has never been observed in hydrogen plasmas. The thermal transport analysis based on TASK3D-code shows significant reduction in the thermal diffusivity at the edge region (r/a=~0.8) which indicates the formation of ETB.

In the future fusion reactor, the deuterium (D) and tritium (T) ions co-exist in plasmas and are assumed to be uniformly mixed with the ratio of D/T=1. On the other hand, it is not clear whether this assumption is always valid. To clarify the assumption, experiments to investigate the isotope mixing state were performed using Deuterium and Hydrogen mixture plasmas. It was found that the non-mixing state of isotopes can be realized when the centrally fuelled ion species are different from the ion species fuelled at the edge 5. Figure 4 shows a typical example of the non-mixing state where the tangential NBI fuels Hydrogen ions in the central region while the Deuterium is supplied at the peripheral region by a wall recycling (black symbols and curves). It was found this state can be changed to mixing state by an injection of ice pellet of hydrogen isotopes, i.e. either of Hydrogen or Deuterium. It was also found that a formation of hollow density profile due to the pellet injection plays an important role for changing the state. 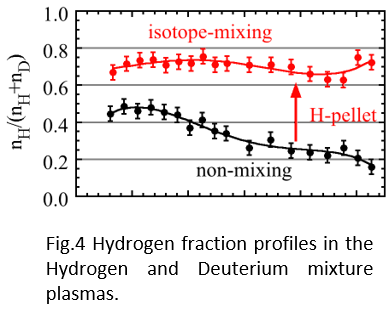