Access to high current (IP >~ 1 MA) relativistic electron (RE) beams in the DIII-D and JET tokamak reveal excitation of current-driven (low safety factor) kink instabilities that promptly terminate the RE beam on an Alfvenic time-scale [Ref. 1], a phenomenon first observed during the early JET carbon wall operation period. Unlike past results however, this phenomenon when combined with the injection of D2 is found to minimize heating of the first-wall, offering an unexpected alternate pathway to RE beam mitigation without collisional dissipation. Minimized heating is explained by two synergistic effects. First, during large-scale kink events experiments find [Ref. 1] and MHD orbit-loss modeling calculates [Ref. 2] a significant increase in the wetted area of the RE loss. Second, as previously identified at JET and DIII-D, the fast kink loss timescale precludes RE beam regeneration and the resulting conversion of magnetic energy to kinetic energy. During the termination the runaway kinetic energy is lost to the wall but the current transfers to the cold bulk, enabling benign Ohmic dissipation of the magnetic energy on longer timescales. In addition, this novel approach exploits D2 secondary injection, which is found to be a necessary ingredient. Practically, D2 enables access to high IP (via reduced collisionality & resistivity) and directly inhibits RE beam regeneration. Sufficient D2 purity to avoid heating is achieved by both shattered pellet secondary injection and conventional massive gas valves. While unexpected, this path scales favorably to fusion-grade tokamaks and offers a novel RE mitigation scenario in principle accessible with the planned actuators of ITER.
The baseline strategy for mitigating a fully-formed RE beam in ITER is the injection of massive quantities of high-Z material (Argon) using shattered pellet injection (SPI). This collisional approach is challenged by low rates of high-Z assimilation into the RE beam as well as the acceleration of the vertical instability. Recent observations on DIII-D [Refs. 1,2] and JET reveal a possible alternate pathway for RE mitigation by exploiting current-driven kink instabilities naturally occurring at low safety factor (q_a). Predictions (by the DINA code) of ITER’s RE beam evolutions mostly cross the low qa stability boundary as IP is decreasing, with some variation based on the size and localization of the RE seed [Ref. 3]. In present tokamaks, increasing the RE current is utilized to controllably access low qa. RE position control is also used, and the relevance to a vertically unstable ITER beam will be discussed.
After a period of rising IP, both DIII-D and JET observe the RE beam to be promptly terminated (at t=tloss) by MHD activity with Alfvenic (sub-ms) growth rate, as shown in Fig. 1(a-b). Injection of D2 reduces the RE resistivity and allows the solenoid to push to low qa. DIII-D magnetic measurements and MHD stability modeling with the MARS-F code find that the observed MHD is consistent with current-driven resistive external kinks. The kink stability is found to be similar to regular plasmas (Fig. 1[c]). Surprisingly, while the potential for damage is substantially larger due the higher IP (Fig. 1[d]), wall heating during these fast terminations is negligible and below the noise floor of the JET infrared cameras (Fig. 1[e]).
Modeling and experiment support the absence of wall heating as being due to both an increase of the wetted area during the MHD-driven RE loss and an inhibition of the conversion of magnetic energy into RE kinetic energy normally observed during RE loss events. Figure 2(a)-(c) presents orbit loss modeling of DIII-D with MARS-F. As the magnitude of the kink instability increases all possible RE orbits are eventually deconfined at a level consistent with magnetic measurements (dBmeas). Tracing the location of the wall strike for these orbits (Fig. 2[d-e]) finds an increase in the spatial extent of the possible RE loss, enabling the energy flux per unit area to be significantly decreased as compared to the conventional very localized RE strike. Spatially distributed HXR measurements (Fig. 2[f-g]) confirm a wider spatial extent of the HXR loss pattern during low qa loss events. The computed complete de-confinement of all orbits also supports the absence of RE beam regeneration, as the electric field induced by the RE loss cannot accelerate further REs. The RE current instead transfers to the cold bulk population, which then dissipates the magnetic energy resistively on a longer timescale. Further studies in JET reveal that absence of regeneration requires a high purity of D2, for reasons that are not yet fully understood.
To conclude, observations reveal a benign mitigation of high IP, fully-formed RE beams. While further experimentation and modeling is needed, these results offer an unexpected and novel pathway for RE mitigation in ITER: inject D2 and excite large MHD by crossing the kink stability boundary. 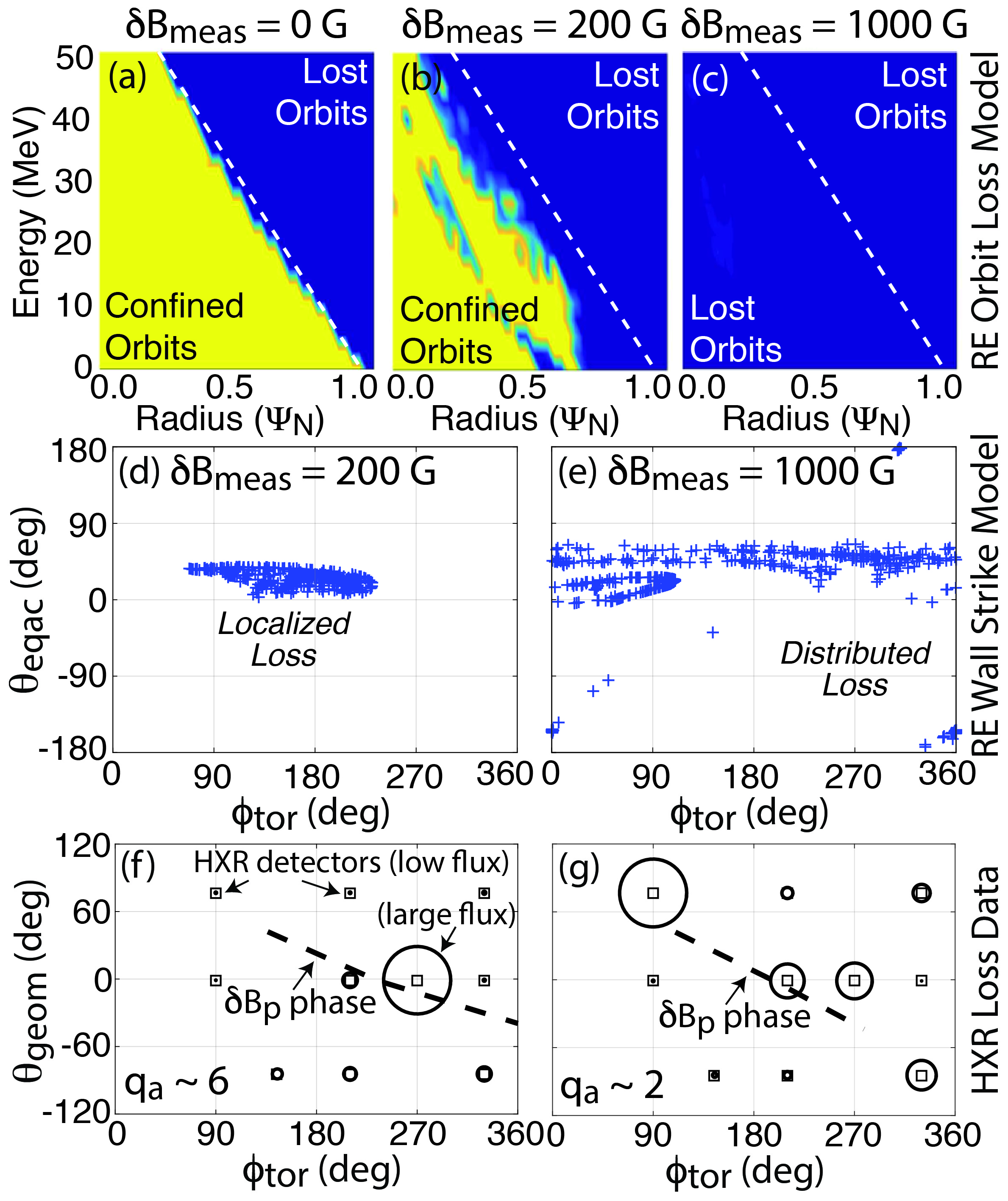